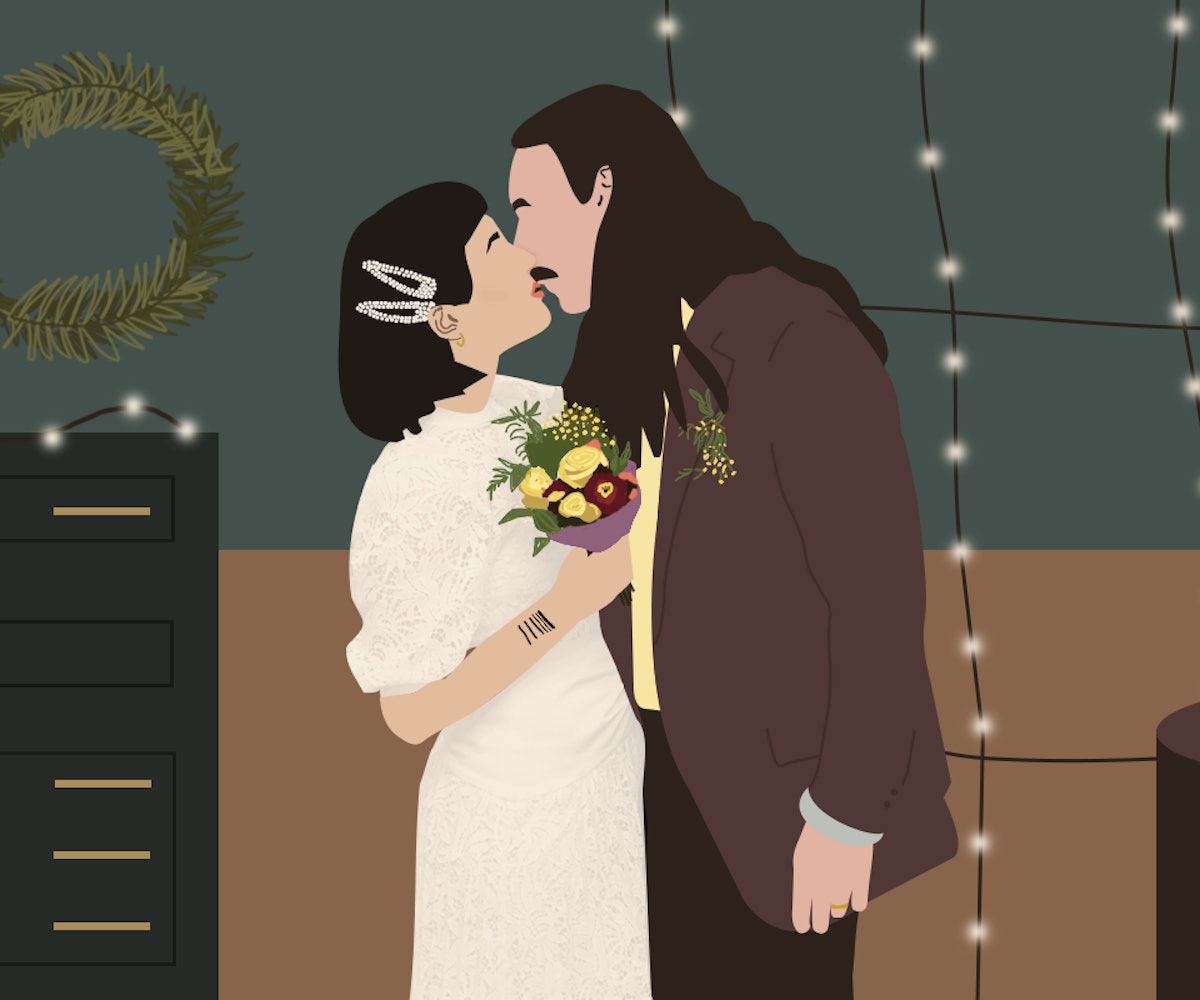 I love weddings. I really do. I've been to a quite a few over the years, and they're (usually) a pretty good time. Still, there's always been something about the idea of the "traditional" wedding that irked me.

Most of the weddings I've attended have ticked all of the "traditional" boxes—the sweeping white gown, the sharp black tux, the big venue, the flowers, the decor, the (staged and cheesy) photos of the bridal party and groomsmen—and ranged from modest in size to completely over-the-top. And maybe it's just because I've finally hit that age, or maybe it's just everyone's need to make social media a major part of their personal experiences (hey, I'm guilty, too), but it seems that I can't scroll through Instagram on a weekend without being inundated by wedding photos, each party more ostentatious than the last.

But, what if you don't want to shell out tens of thousands of dollars and spend months and months (and sometimes years) stressfully planning out each and every detail for your Instagram feed? What's romantic about that? Don't get me wrong: If a conventional wedding is what you want, great, but since I knew it wasn't what I wanted, it became clear that I had to find a better way when it was time for my wedding. Which, as it turned out, happened earlier this spring, when my partner, James, and I decided to get married.

While I can't say I gave much thought about what my "dream" wedding would be before I'd met James, I had always known anything too classic was out of the question for me—I've never really considered myself to be traditional in any aspect of my life, anyway. But this wasn't just a question of style, it was also a matter of having to do extensive planning, commit to a financial burden, and deal with the nightmare of figuring out a guest list that wouldn't piss off extended family members we never saw anyway. It all just felt like one big, monstrous anxiety attack to me. (That's not to say I didn't face some anxieties of my own, like telling my parents I was marrying my boyfriend of eight months at City Hall in a month's time, or keeping that fact a secret from my 91- and 92-year-old Catholic-Italian-American-from-Brooklyn grandparents until after it had already happened. Everyone eventually got over it.)

James and I knew we wanted to keep things close and intimate, something small attended by only the people with whom we spend most of our time. We didn't want anyone to feel financially put out by the wedding—including ourselves. So, we decided on the following: We'd have a simple City Hall ceremony, we'd eat some good food afterward, and then we'd have some sort of party reception. It would be scrappy, yes, but it would be exactly how we wanted it.

There's something really romantic, and uniquely New York, about getting married at the Downtown City Hall (well, technically, the City Clerk's Office). It's literally like going to the DMV. You get a ticket, you wait around with a bunch of other people until your number is called. Only, this time, everyone waiting around with you is a bride or a groom, or some form of a (hopefully happily) teary-eyed friend or family member. My best friend since age five was our witness, and about 10 of our closest friends joined us, along with my parents, sister, and her partner. After the ceremony, my parents took us all out for lunch down by the Seaport.

Of course, it wouldn't be us if we didn't have some kind of party to celebrate our union, either. Rather than shell out, you know, a modest $20k on a venue, we wanted to spend as little money as possible, and also still have it feel genuinely us. Lucky for us, our friends live in one of the most beautiful Brooklyn lofts we've ever seen, and they agreed to host our reception. Gritty on the outside, expertly built-out and tastefully filled with plants, vintage furniture, and bookshelf-lined walls on the inside; it was perfect.

With the help of a couple dozen votive candles, some twinkle lights, and fresh flowers, my best friend (who would have been my maid of honor, should I had gone the traditional route), transformed the space into the perfect wedding reception venue. Throw in a dozen bottles of booze (which lasted a whole 30 minutes before guests began going on hourly liquor runs), a keg, platters of food, a cake decorated with a pig's face, a couple friends helming the "DJ booth," and about 30 sparklers that were definitely not safe to set off indoors, and we had a pretty good party on our hands. While about 40 to 50 guests were there throughout the night (as the party raged on until about 5am—the other benefit of a house party versus a proper venue), some strangers or friends of friends also came due to the house party nature of it—which, honestly, made it all the more fun.

Hands down, it was the best party I had ever been to. And fine, maybe I'm biased, but many of our guests said the same thing. And it wasn't because I had on the most expensive gown, or hosted it at the city's most exclusive venue. It's not because I had 300 people there. It's because we did it our way.

Everyone we loved and wanted to be there was there (aside from a handful of his close friends who, understandably, couldn't make the trip from New Zealand on such short notice). There was no arguing over how many extended family members had to be there. There were no bridezilla moments to be had over cakes or table centerpieces. And, considering we collectively spent under $500 on the whole thing, we were pretty happy about that too. Scrappy and simple, it was the most beautiful day of my life.

I'm not here to preach that traditional weddings are only ever indulgent, expensive, and generally a waste of resources for just one night, some photos, and satisfying your older family members—if that's what you want, go for it. But, I am here to tell you that if you, too, feel that way, and are thinking of doing your own thing, ignoring what your family—or society, rather—expects of you, you can still have the most beautiful, romantic, and memorable night of your life. Mine involved a bride-and-groom kegstand, and I wouldn't have had it any other way.

On that note, the only thing I will say is—even if you're not doing it for the 'gram—you might want to consider splurging on a photographer, because beer-covered Polaroids and grainy iPhone shots aren't exactly the most framable keepsakes to have forever.