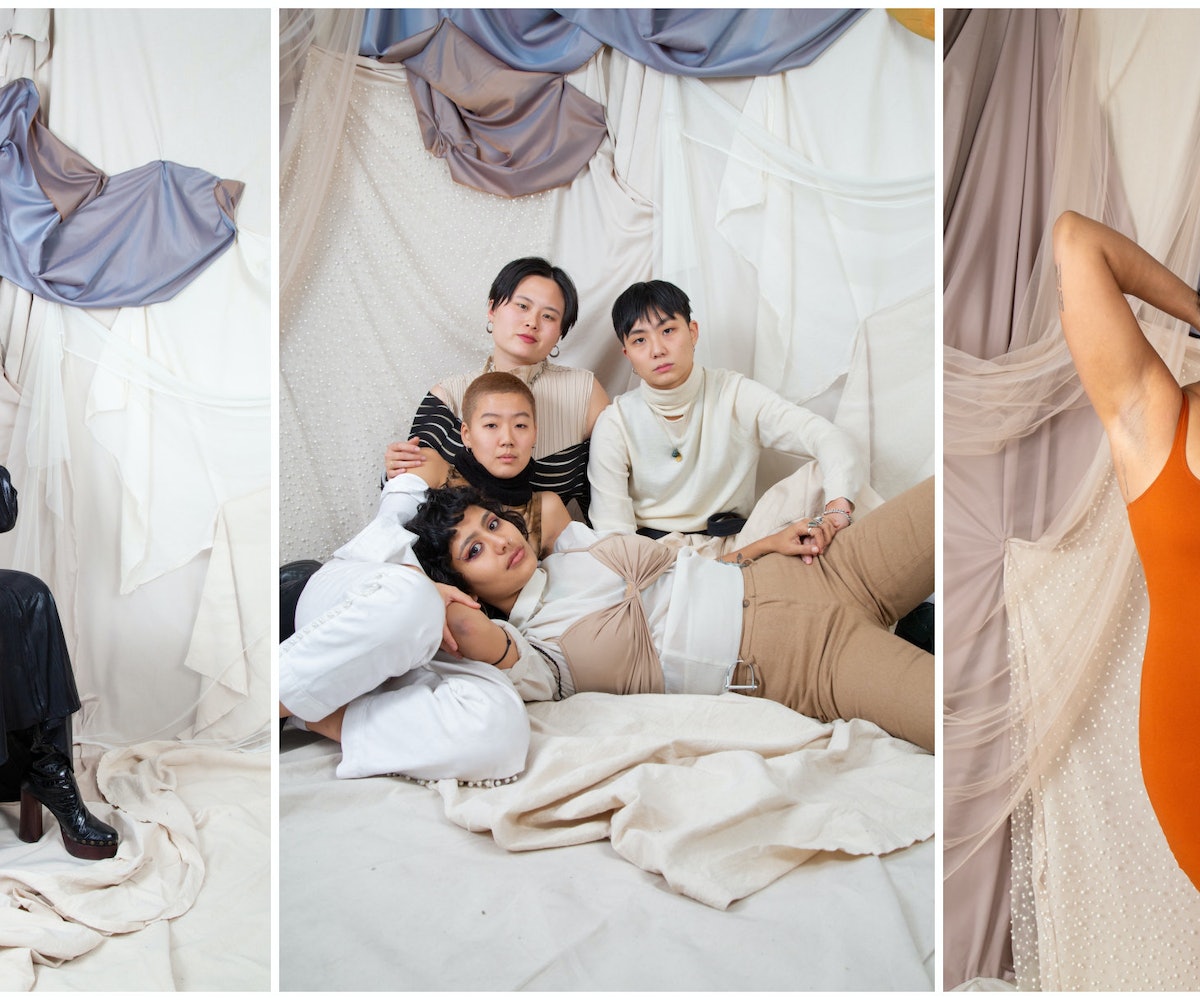 There are multitudes of ways that a queer community could look. Unfortunately, though, a homogenous queer identity has been shown in art and in the mainstream media throughout history. Artist Naima Green has set out to challenge the mainstream perception of queerness by offering a new look at a classic piece of queer art.

In 1995, Catherine Opie released a project called the Dyke Deck. Already known for her transgressive portraits, Opie's new work solidified her status as a boundary-pusher, while also being exactly what you'd think it was: a deck of cards with a photograph of a lesbian woman or couple printed onto each card. Though not meant to be an exhaustive representation of the queer community, Dyke Deck instead serves as a time capsule for Opie's community in the San Francisco Bay Area in the '90s. The subjects were placed into a suit based on their gender expression or relationship status: couples are hearts, jocks are clubs, femmes are diamonds, and butches are spades. It was subversive in how matter-of-fact it was, in how Opie took a simple household object–a deck of cards—and made it queer.

Of course, even in the '90s, these identities represented in Opie's work were not the only ones that exist within the queer community, which is why an update is welcome and why Green is making her own reinterpretation of the deck. Called Pur·suit, Green's deck is being created in order to represent a "missing data set." Meaning, the queer and trans people, namely people of color, who "continue to be marginalized" in our society. Among those who have sat for portraits are New York Times writer and podcast host Jenna Wortham, photographer Lola Flash, sex educator Ericka Hart, and art curator Kimberly Drew. Green has also photographed queer collectives, such as BUFU, Yellow Jackets Collective, and Bklyn Boihood.

After she discovered Opie's deck, says Green, "I started thinking, Okay, when I think of someone who is queer, who's gay, who is a lesbian, what comes to mind? Outside of my immediate community, the people who make up my queer community would not come to mind for most people."

That's because, even in 2019, when and if queerness is represented in the media, it's still overwhelmingly cis or white or male—or all three. But, of course, that's not the only type of queerness that exists in the world, and Green is interested in counteracting the dominant mainstream depiction of queerness with something that's more representative of what queerness can actually be. "I'm interested in rethinking what types of queer communities are centered and upheld and given more space," Green says. "[There are so many different] queer communities in existence, and very present, who aren't able to take up as much space as they probably need to."

"When I first saw Opie's deck, I felt supported in a way that I didn't expect," says Green. "I felt like if I hadn't found this deck, I wouldn't have been able to see into this community." It also served as a vital jumping-off point for Green to make something more inclusive, and something that will be seen by larger audiences thanks to Green's creation of an online archive, where there will be the portraits of anyone who wants to sit, as well as whatever materials that they want to include. People can submit "a song, a poem, a letter, some sort of recording, or it can just be the photograph that I made," Green says. It will start with 100 people, and expand from there.

"The deck of cards is a fixed object, and it will be the same 54 cards in 20 years as it is now," says Green. "If I was just making a deck, and someone was not in it, then where would their portrait live? I'm not interested in making an exclusive object, and have people not be included."

Green hopes to make sure that the people who don't fit into the mainstream understanding of queerness do not get forgotten. She recalls how Wortham, a friend of hers, sent her a copy of Sister Love: The Letters of Audre Lorde and Pat Parker, which led her to the startling discovery that she had never before heard of Pat Parker, a Black lesbian poet and activist. "I don't want the thinkers and the makers—the people who are uplifting and working for our community right now—I don't want their voices to be lost," Green says.

Not only doesn't she want voices to be lost, but Green also just wants to add to the conversation. And that's why Green's deck is in no way a challenge to Opie's original version, but simply an update of it (and, in fact, Green has been granted permission from Opie herself to reimagine this work).

Opie's deck came out in a totally different queerness climate. It's hard to visualize now, but in the '90s when the Dyke Deck was released, queer stories weren't so easy to access. There wasn't Pose, or even The L Word; there was barely any gay or lesbian representation onscreen, not to mention a complete lack of trans or nonbinary stories. And, every kiss between a gay couple on television in the '90s featured white, cis people. This is one reason why Opie's deck was so transgressive and inspiring, but it's also why it's ready for a new iteration.

And yet, Green understands that her own project is just as reflective of one moment in time as Opie's was, and that it will not represent the queer community for decades to come. "I hope that in 20 or 30 years, another artist will see both of our decks and say, 'Okay, you guys did something for your time, but what's happening right now is totally different,'" says Green. "I'm hoping that there will continue to be more conversations and visualizations, more representations of how queerness is changing." Because we're constantly changing.

You can help Green's project come to fruition by donating to its Kickstarter, here.