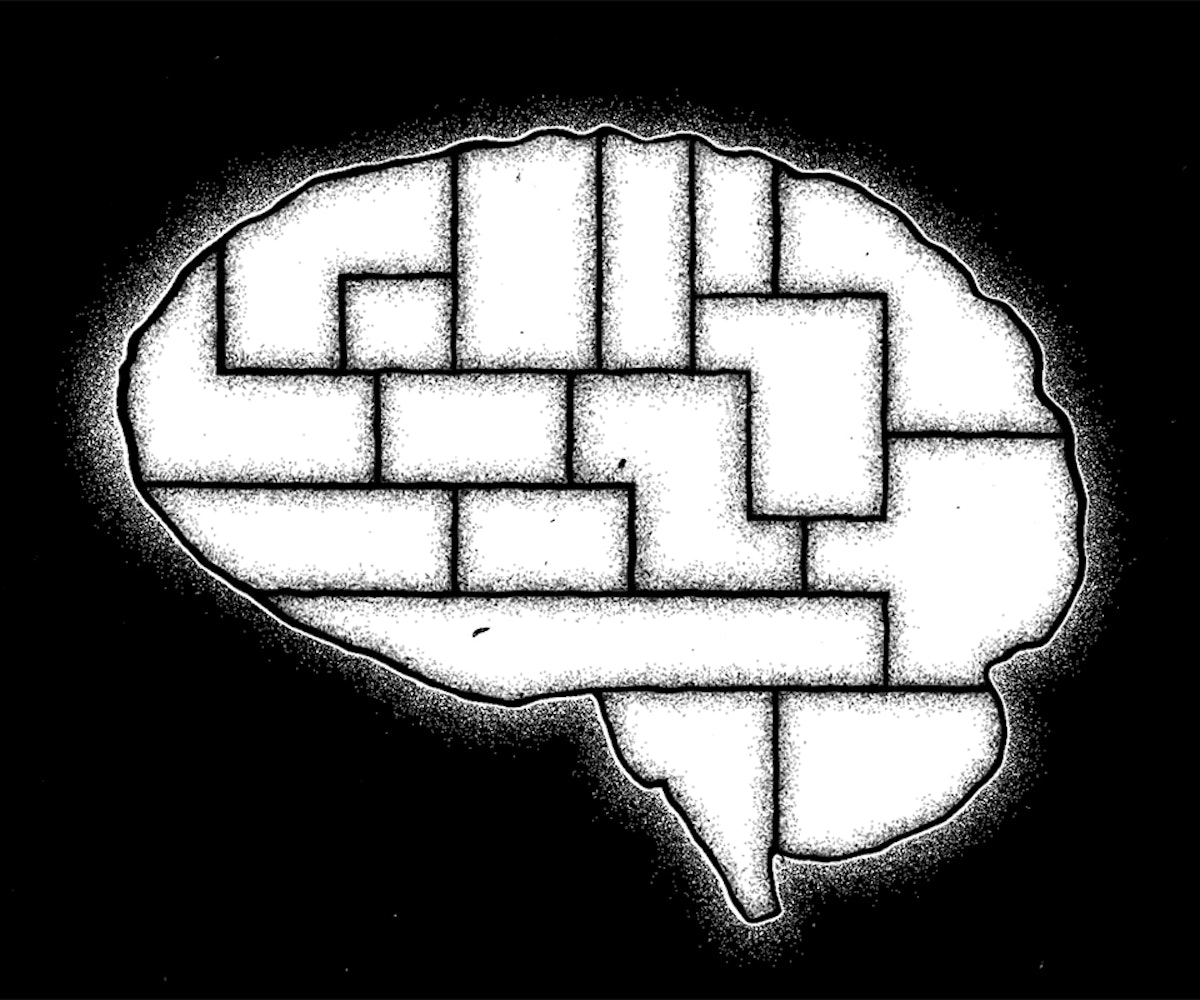 Netflix has a new show—an informational series, aka something I'd typically never watch—that has helped me find a new perspective on my own anxiety. The five-part series, The Mind, Explained, explores different elements of the human brain, from memory to dreams to my favorite (ahem, least favorite) subject: anxiety. If that weren't enough to catch my interest, it's also narrated by Emma Stone, who is also extremely of interest to me.

The anxiety episode is informative yet completely accessible, and had me shouting, "OMG, ME" at literal infographics. It's like Schoolhouse Rock but about mental health, and instead of being for kids, it's for adults who can barely look at one screen long enough to not look at another screen (again… me). The Mind, Explained presented a series of facts about anxiety that made me feel severely less alone. Like, for example, did you know that anxiety is the most common mental illness, and that 30 percent of humans are "destined to be seriously impaired with anxiety"? Me neither. Even though I have numerous friends who battle generalized anxiety disorders like I do, I still feel like we're floating on an isolated island, a bubble of suffering to which others are immune.

Because the episode was very "mental illness for dummies," it broke anxiety down in scientific terms I could understand. Like, where does anxiety come from? Physically, it comes from the amygdala, and people who have anxiety have overly sensitive amygdalae. The amygdala is the part of our brain that identifies threats in everyday situations and, subsequently, launches adrenaline reactions.

This is the part I found the most fascinating, and also the most soothing: "People with anxiety often can't reason their way out of the feeling because the logical part of the brain isn't able to rein in the amygdala." In the past, my therapist has offered a similar sentiment, that I won't be able to "think" my way out of anxiety, because it's a physical reaction. That gave me new perspective on anxiety; since anxiety already feels like I'm running on a hamster wheel of thoughts, that the answer is more thoughts, thinking my way out and through. But it's not the answer: Sometimes exercise is the answer. Sometimes it's prescribed medication. But more thinking won't help.

Back to the "where does anxiety come from" question: Sometimes it can be inherited. According to The Mind, Explained, having a parent with anxiety means you're more likely to be anxious yourself. This part knocked my socks off: Women are up to two times more likely to have an anxiety disorder than men. Maybe if we didn't have to deal with the inescapable syndrome I like to call Existing With Men, we wouldn't be so anxious!!

Anxiety can also stem from a chemical imbalance, and also from traumatic experiences. "Your brain is an association machine, it connects things together," says Ali Mattu, a psychologist in The Mind, Explained. This can be a good thing, Mattu says. The example he gave was this: If you get attacked by a lion who jumps out of a bush, you're probably going to be scared of that bush, and that could keep you alive. So, best-case scenario, anxiety is your brain being vigilant, telling you to avoid situations associated with danger. But, it doesn't always work out so well.

The Mind, Explained shows one time, during a (deeply problematic) 1920 experiment called "Little Albert," when it became clear that anxiety can take on a life of its own. In the experiment, researchers exposed a small child to a white rat. Every time the rat appeared, the researchers would clang a hammer on a piece of metal, which actually created this child's phobia of small white animals. But the child also became scared of other things besides white rats, like a rabbit and a Santa Claus mask. This is literally my entire life: over-generalizing and hyper-associating innocuous things with danger, and then projecting bigger, perilous meanings on to them.

The series also further familiarized me with the different types of anxiety disorders. With the amount I've written about mental health, and the number of psychiatrists I've been to, I'm actually furious that I didn't know about the groupings of anxiety disorders—these are things I would've loved my doctor to tell me, so I could wrap my brain around what the fuck is happening to me every day.

The first grouping is Catastrophic Fears, the belief that something bad is going to happen. This includes separation anxiety, aka the excessive fear of being away from loved ones, and other specific phobias, like arachnophobia. The next grouping is Fear of Evaluation, which includes social anxiety (that old friend). Social anxiety is the most common anxiety disorder (how shocking, fellow sufferers!), and is described as "a persistent, debilitating fear of being watched and judged." This category also includes selective mutism, the inability to speak in certain situations. The third grouping is Fear of Losing Control, a big part of panic disorder (from which I also suffer from). This is where agoraphobia fits in—if you fear the loss of control that comes with panic attacks, then you might avoid public places, which might trigger a panic attack. The fourth and final category is Fear of Uncertainty, or not knowing what's going to happen (also, extremely me); this grouping also includes generalized anxiety disorder and OCD, a fixation on impulses and thoughts.

If any of this sounds familiar to you, you're not alone. In fact, it can feel like just about everyone you know now is familiar with anxiety, either from firsthand experience or via an intimate relationship. And yet, one more thing that this series taught me is that rates of anxiety haven't changed over time. So, while it feels like more people suffer from anxiety these days, with all the talk about what phones are doing to our brains and FOX News Boomers clamoring about millennials being pussies or whatever, that isn't the case. What has changed, however, is that we're just finally talking about anxiety more, and introducing mental health conversations to mass audiences, which just wasn't done in the past. Still, I think it's fascinating that anxiety isn't actually less present now than it used to be. Because, like, yes, there are one million things to be anxious about these days, but imagine if penicillin hadn't been invented and you could die from a sore throat? Yikes.

Anyway. For me, the biggest takeaway was this: Perspective matters. Dr. Mattu and comedian Maria Bamford, who is open about her OCD and was interviewed for the series, both talked about a shift in perspective that really helped them with their own anxiety disorders. They realized that if your anxiety has reached an absolute peak and you've lived to tell the tale, then you will survive the next anxiety spiral or panic attack. Like, if you can think about your worst panic attack ever, you can only do so because you survived it. You're still here! Perspective is about learning that you CAN get through it. And then, maybe, you can keep getting through it, forever.