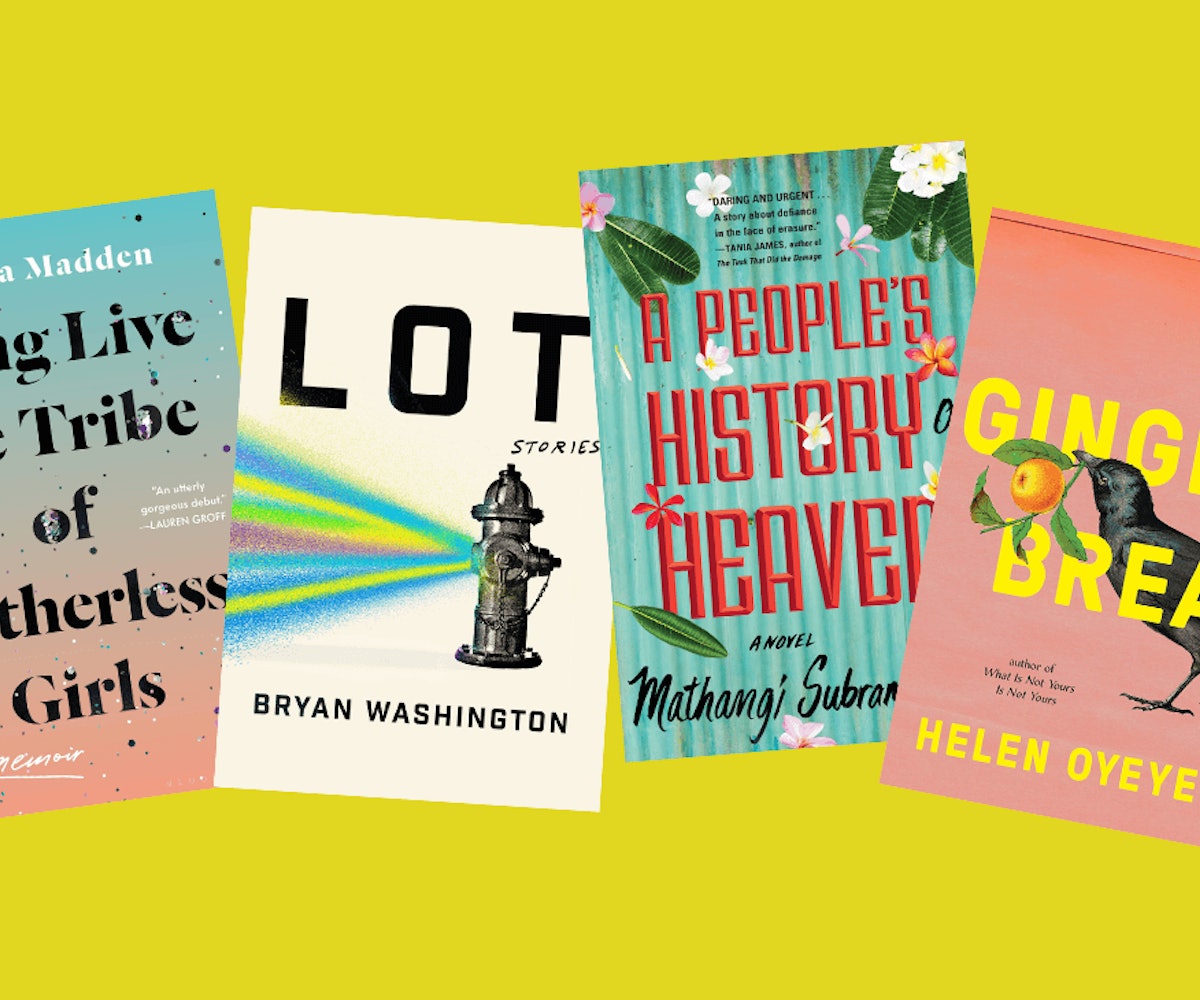 March brings with it so many good things—chief among them, these books. Some of the following titles will be familiar to anyone who read my 2019 book preview, but others are new additions. All are worth burrowing yourself into this month as you wait for spring to come and the days to get longer and life to get better; read one, read them all, just read something, why don't you?

The New Me by Halle Butler (available March 5)

Anyone who has ever felt like their life is going nowhere—and to make it worse, going nowhere in an achingly slow manner—will recognize themselves in Halle Butler's new novel, which centers around 30-year-old Millie, who is stuck in a dead-end, poorly paying job, has no truly intimate friends, watches TV until she passes out each night, and feels burdened by the simplest everyday acts. (Can you say millennial burnout?) Millie's life changes, though, once she spots the prospect of a new job on the horizon. But with those seemingly positive changes come some damning insights into what we deem as being successful, beneficial, and worthwhile. Butler's writing is incisive, witty, and full of surprising, but welcome, simmers of anger; it feels like exactly what we need to wake us out of our collective, capitalist stupor.

There is an impulse the grieving have—or, at least, there is an impulse I had when I was grieving—which is to seek out more stories of grief. Reading about other people's sorrows is not like getting an instruction manual on how to grieve (that comes naturally), but rather like getting evidence that grief is survivable. Anyway, this is all to say that I've read a lot about grief, but this sentence in Richard Chiem's novel, King of Joy, still knocked me right out with its quiet, piercing truth: "Grief is an out of body thing, the worst secret you can have." This is a book about grief, about trauma and recovery, the ways the world destroys us and the ways we accelerate the destruction of our world. All of it is told in Chiem's inimitable voice; it's unsentimental, hypnotic stuff, you'll race through it, heart beating, eyes burning, recognizing your own secrets on every page.

This stunning new book of poems is a profound look at the destabilizing effects of political unrest and bloodshed, and the way in which one single action can engender reverberations throughout a society. The book begins with an act of violence: Petya, a deaf boy, is killed by soldiers dismantling a crowd of political protestors. The sound of the shot that kills him becomes the last sound that anyone in the country hears. Kaminsky's decision to confront the horrors of complicity by utilizing traits like involuntary deafness and willing silence is a satisfying one; he deftly shows the ways in which the absence of one sense makes others so much more acute. But this parable doesn't only work in abstract terms, its emotional core runs deep and hot, and it serves as a necessary reminder that we must not close our ears, our mouths, or our eyes against the injustices around us.

Every page of this gorgeous, if harrowing memoir has a moment on it that sticks in you like a blade, carving out a little piece of you; reading it feels like you're examining your own insides. But, of course, the story is uniquely Madden's and recounts her experience coming of age as a queer, biracial young woman in Boca Raton, Florida, a place where cognitive dissonance about the surrounding inequalities and injustices abounds. Madden brilliantly captures the contradictions of a life filled with trauma and beauty, and sensitively dissects the environment of abuse and addiction in which she was raised. Her story is filled with desire and loss, love and forgiveness, and it's an utterly unforgettable debut.

Following the success of Boy, Snow, Bird and What Is Not Yours Is Not Yours, acclaimed writer Helen Oyeyemi is back with a family saga that spans generations of women and centers around, well, gingerbread, that spice- and sugar-filled treat that has played a role in much mythological lore. Oyeyemi's novel has the tinge of the folkloric to it: There are family feuds, a childhood friend named Gretel, and many more archetypal touchstones. Tying this all together is Oyeyemi's deft hand, virtuosic lyricism, and graceful ability to find transcendence in all aspects of life, sweet and spicy alike.

Sex? Check. Drugs? Check. Rock 'n' roll? Check. This is the perfect novel for anyone who invariably chooses "Landslide" when doing karaoke, Taylor Jenkins Reid's latest novel takes place in the wild days and nights of the late-'60s and '70s music scene, as a young woman named Daisy Jones finds herself on the road to making it big. Reid's wit and gift for telling a perfectly paced story make this one of the most enjoyably readable books of the year.

It's no coincidence that there's an abundance of novels coming out right now that are set in a not-too-distant dystopian future, but there's only one that centers around the most perfect, odd couple pairing I've encountered recently, and that's Seth Fried's debut novel, The Municipalists. That odd couple comprises an anal, anxious human bureaucrat and a snarky, day-drinking, yet lovable A.I., and the two of them have joined together to save Metropolis—"a gleaming city of tomorrow"—from an impending terrorist threat. If you're a fan of Jane Jacobs, but can't help but hiss and boo whenever Robert Moses' name is mentioned, this is a must-read. Then again, even if you've never spent one day in a city, but are just someone who wants to laugh and marvel at Fried's imagination and wit, this book is also for you. Really, it's for everyone.

A People's History of Heaven by Mathangi Subramanian (available March 19)

Heaven, it turns out, is a place on earth: It's a long-established slum in Bangalore, tucked in-between fancy high-rise apartment buildings, and filled with a community of people who don't have much in terms of money but do support one another in a way unique to their own circumstances. Subramanian's novel centers around five young girls living in Heaven, who support one another through the travails of school, life, and love, all in an effort to maintain their own little piece of Heaven, even as other forces (namely, real estate developers) try and tear it all down. Subramanian writes with empathy and exuberance, offering a much-needed glimpse into a world that too many of us don't even know exists. This is a book to give your little sister, your mother, your best friend, yourself, so together you can celebrate the strength of women and girls, the tenacity it takes to survive in a world that would rather have you disappear.

This dazzling debut collection of stories is set in Houston, Texas, and allows readers peeks into the lives of myriad city-dwellers, each representing a different, brilliant aspect of this many-faceted city. Washington's stories offer an unflinching look at a part of America that many people don't understand—or care to understand. But Washington's generosity, empathy, lack of sentimentality, vibrancy, and lyricism make it clear that these people, that Houston, is America, in all its messy, complicated, heartbreaking, life-affirming glory.

Sing to It: Stories by Amy Hempel (available March 26)

It's a real event when a real master releases new work, and there are few other writers around who can match Amy Hempel when it comes to short stories. Every word of Hempel's sings, and she is singularly able to get across the lustful, the profane, the holy, the damned, in just a few pages, or even just a few sentences. Her new collection—her first in a decade—comprises 15 stories, which are all reliably stunning, offering glimpses into the depths of the human experience. It's a must-read.

This graphic memoir is structured around Mira Jacob's talks with her six-year-old son, who asks her questions about everything from Michael Jackson's signature dance move to why "white people are afraid of brown people." While it's become something of an internet trope, the sagacious child teaching lessons to his elders through seemingly simplistic questions, Jacob's book transcends that trope and offers a poignant look into what it means to raise a child in a world that isn't just ambiently hostile, but often specifically hostile to people who look like him. Jacob uses her son's questions to meditate on her own experiences with love and hate and everything in between, and her provocative, generous explorations are benefitted from the beautiful illustrations, making this book a work of art on every possible level.

The Other Americans by Laila Lalami (available March 26)

This powerful, provocative novel centers around the mysterious death of Driss Guerraoui, a Moroccan immigrant who is killed by a car late one night in the California desert town he's made his home. As the details surrounding Guerraoui's death are slowly revealed, more secrets come out about the people he's left behind, the systemic problems within the town itself, and the ways in which America continues to fail the myriad people who call it home.

The Old Drift by Namwali Serpell (available on March 26)

It's hard to believe this is a debut, so assured is its language, so ambitious its reach, and yet The Old Drift is indeed Namwali Serpell's first novel, and it signifies a great new voice in fiction. Feeling at once ancient and futuristic, The Old Drift is a genre-defying riotous work that spins a startling new creation myth for the African nation of Zambia. The book follows the stories of three different families, whose connection to one another hinges on a mere accident of fate, and traces their lives across generations, spanning miles and miles, and as their futures unfold, so too does our understanding of the exigencies of fate as it pertains to myth-making on both a personal and national level. Serpell's voice is lucid and brilliant, and it's one we can't wait to read more of in years to come.

In this perfectly uncanny collection of stories, Leanne Shapton explores the many things that follow and haunt us as we go about our lives, unsettling us in sometimes terrifying and sometimes exhilarating ways. Shapton's words are interwoven with images of art and artifacts, adding to the surreal aura of each of the stories, reminding us of the always pulsing energy that imbues nearly everything around us, always, whether we feel it right away or not.