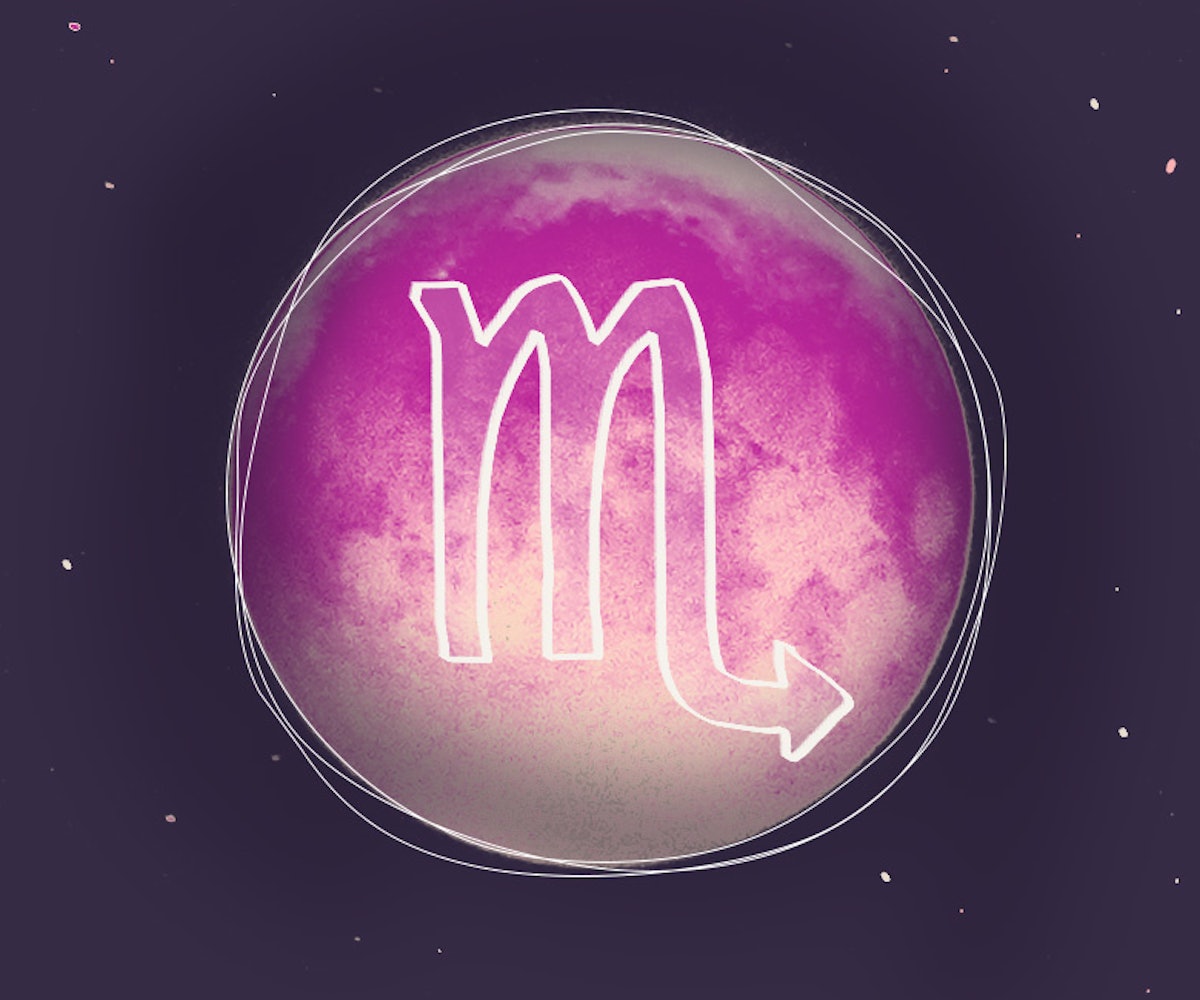 It's the season of the witch, and by witch, I mean Scorpios everywhere. To celebrate, the sky is offering us a new moon in Scorpio on October 27, whose effects will carry us through Samhain and into November. Will Venus conjunct Mercury Rx be in Scorpio during this new moon? You betcha. While the sky darkens (just a little bit more and just a little bit earlier) and the veil thins, Venus, the planet of love, flirtation, and money will be in a sign that rules our sex organs, our secret desires, and other people's money. If that sounds like a good time to you, then it just might be one. The only hitch is, Mercury, the planet of communication and technology, will be retrograde in Scorpio by Halloween night, and the shadow of this transit is already making its mark. Mixed messages, canceled plans, and slips of the tongue could sting sharper than expected. And, with the new moon in direct opposition to chaotic Uranus in Taurus, big reveals that lead to upheavals are not out of the realm of possibilities.

Now that we've got the facts laid out, we can survey them as one might a feast of possibilities. The new moon is a potent time for game plans, to-do lists, and invocations. But, Mercury retrograde can function like a tire-lock on your wheels, keeping you in place until you pay your debts. Good thing Scorpio knows a thing or two about debts. More than keeping a lover, more than keeping a secret, Scorpio knows how to keep the score. Collectively, U.S citizens await impeachment news, our eyes glued to the headlines and ears tuned to negotiations of power and the strategic unearthing of secrets. Interpersonally, with Mars still in Libra, many of us strive to negotiate the line between faith and false optimism in our affiliations, our public dealings, and our intimate lives. Paired with Venus in Scorpio, there's an intensity suffusing the air, a will to transform old wounds into new personal powers and a commitment to facing what we're afraid of — even and especially if what we're afraid of is tied up with our financial matters.

Take this literally if it suits you, if it means scheduling a call with your loan providers or making a spreadsheet that helps you figure out where you're leaking money. Scorpio energy is perceptive and intuitive, traits that benefit one's financial choices just as much as they do one's interpersonal endeavors. It wouldn't hurt you to change some passwords, especially if someone from the past still has access to your present. Speaking of the past, there are many ways to define a debt and many ways to accrue one outside of systems of capital. Beyond the parameters of banks and government institutions, Scorpios everywhere carry within them an unwritten ledger of their private transactions. Under the Scorpio new moon, it couldn't hurt to ask yourself if there's someone you owe something to. If what you owe is an apology, now is a good time to offer one. Send that thank you card, reply to the difficult letter, make the second appointment because you owe yourself good care.

What you owe yourself is of great importance this fall, not only to you but to all the spirits that watch over you, protect you, and root for you. When we witches say the veil is thin, we mean between the living world and the world beyond it. On the other side of this veil, there exist powers — like spirits, like angels, like gods — and these powers have plans for us just like stars do. When we betray our boundaries and our truths, we betray something bigger than us — perhaps many things — and there's nothing a Scorpio detests more than betrayal. Sometimes self-betrayal is as simple as saying yes when you don't mean it. Ask yourself if holding the burden of your disappointment in a person or a job is worth more to you than setting it down and creating space in your arms for the unknown. Sometimes self-betrayal is as difficult as refusing to forgive yourself for something you would have long ago forgiven someone else. In that case, it's you who owes you an apology. Spend the new moon writing yourself an apology letter, lick the seal, and tuck it under your pillow. When you wake up, you can tear it open — preferably with a knife — read it gently to yourself, and then, when you're done, press it to your heart and say out loud, "I forgive you."