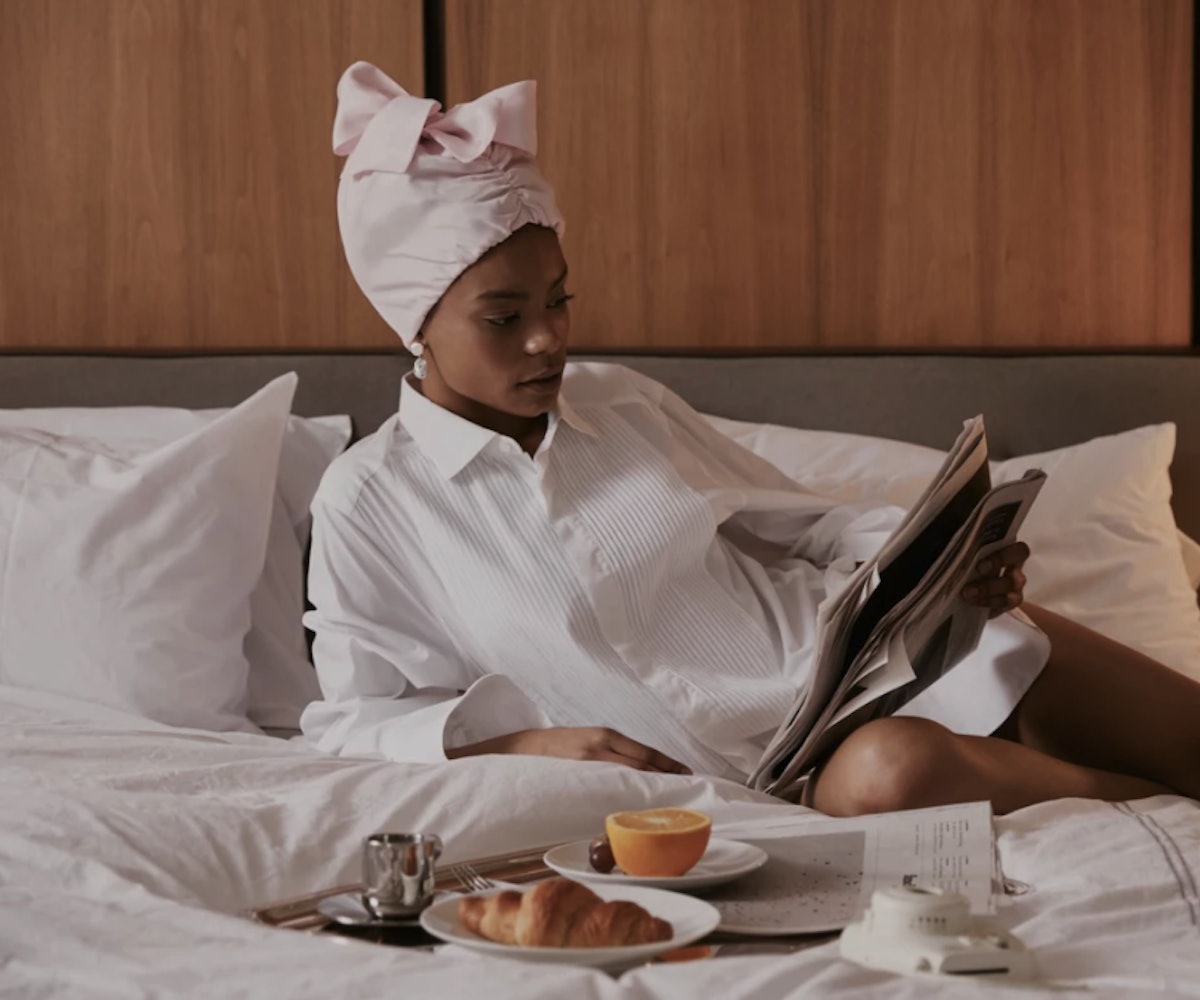 UPDATE 07/29/19: NiteCap has issued an Instagram response to the many articles—including this one—which discussed the problems of claiming a beauty product like a bonnet as having been created by a white woman.

In an interview with FASHION Magazine, a woman named Sarah Marantz Lindenberg delivered some pretty shocking news: She thinks she invented a new nighttime hair protector, something that she calls a "silk hair wrap," and which we already know as something that's been around forever: the bonnet.

Lindenberg says she "came up" with the idea after her dermatologist suggested she sleep with her hair out of her face; this led to her doing "borderline obsessive research" to find a solution to her "problem that needed solving." Whether her search engine was broken, her research wasn't very thorough, or she willfully ignored already-existing bonnets as a whole, remains a mystery—but what we do know is that this process resulted in Lindenberg launching NiteCap, a "washable silk hair wrap" that "extends the life of your blowout and ends bedhead, frizz and bad hair days, once and for all."

Which, okay, that's all terrific, but it's also just the description of a Black beauty staple. But, rather than giving credit where it's due, Lindenberg privately recognized the value of the bonnet and decided to slightly tweak its branding, throwing a bow on it and passing it off as new. Even the name "NiteCap" feels like an attempt at erasing the bonnet's Black cultural origins, as it's a literal renaming in the most fundamentally descriptive terms of something that already exists.

But, then, perhaps neither Lindenberg nor her audience really knew that bonnets existed. After all, the subhead on the article reads, "This isn't your grandmother's silk hair wrap." This actually rang true—with one slight change. It should read, "This isn't my grandmother's silk hair wrap," because that is undoubtedly true for many women—just not for Black women, who have been found hanging their bonnets from bedposts and tucking them in-between pillowcases for generations. The point is, it isn't a new invention, and it has an entire subculture dedicated to its existence. There are podcasts named after them, beard bonnets for those who want to keep those hairs silky too, and enough Black-owned options to keep your ends hydrated for life.

However, instead of referencing these very-easy-to-find facts, when asked about the origin story of her "silk hair wrap," Lindenberg vaguely gestured to the beauty routines of "many people's grandmothers," before attempting to claim kinship via her great-grandmother's unorthodox DIY beauty regimen (it involved using toilet paper to curl her hair).

What's missing from Lindenberg's explanation is an acknowledgement of the vibrant, ongoing usage of the bonnet (see the #BonnetLife hashtag if you're curious)—as well as acknowledgment of the people who have used it for both function and fashion for decades (the latter being a controversial action that is often labeled "ghetto"). Black people don't have to search branches of their family tree for "silk hair wraps," many have been wearing them nightly for years—a practice that has been passed down to them and will continue on for generations to come. Lindenberg also refused to name Black women when asked about the "considerations" she made when coming up with the design, stating that she met and interviewed women who wrapped their hair, some of whom have "hair extensions and weaves." Though she could be referring to any race of women with this statement, if Lindenberg did interview Black women and then still chose not to rethink the "silk hair wrap," she either believed her product was innovative and something everyone truly needed and could benefit from, or didn't care to situate her product within a cultural tradition that didn't need her contribution in the first place. History, the article, and the brand's continuous usage of vaguely similar headwraps donned by white women on its Instagram point to the latter explanation as being true. To make matters worse, NiteCap utilizes one Black model on its site and throughout its marketing, using her image to communicate cultural awareness, inclusivity, or some failed mixture of the two.

Lindenberg isn't the only one to blame. The brand could have died in obscurity, worn only by her and her supportive friends. But its relative success and media amplification is telling. A combination of connections, privilege, and sheer ignorance made this possible. While some might argue that NiteCap is "innovative" for its commitment to sustainability and organic, high-quality materials, it's more likely that the founder and NiteCap's customer base find it so because this is the first time they've come into contact with a bonnet of any kind. This also explains why Lindenberg is so comfortable with such a high NiteCap price point—Black-owned bonnet brands like Grace Eleyae are far more affordable—and why its customers, some of whom buy it through Goop (which duly refers to the NiteCap as "ingenious"), are okay paying such a wild premium.

Not everyone is fooled though. Twitter swiftly stepped into this conversation, with @imbobswaget tweeting in response to the article: "Not a white lady pretending she invented sleep bonnets and selling them for $100." The tweet has almost 2k likes (and counting) and stoked an ever-burning flame of annoyance, one fueled by erasure and bolstered by "inventions" like crimped ponytails. Treating the NiteCap as a new invention is dangerous, and is a perfect example of how you can Christopher Columbus the culture and (nearly) get away with it.