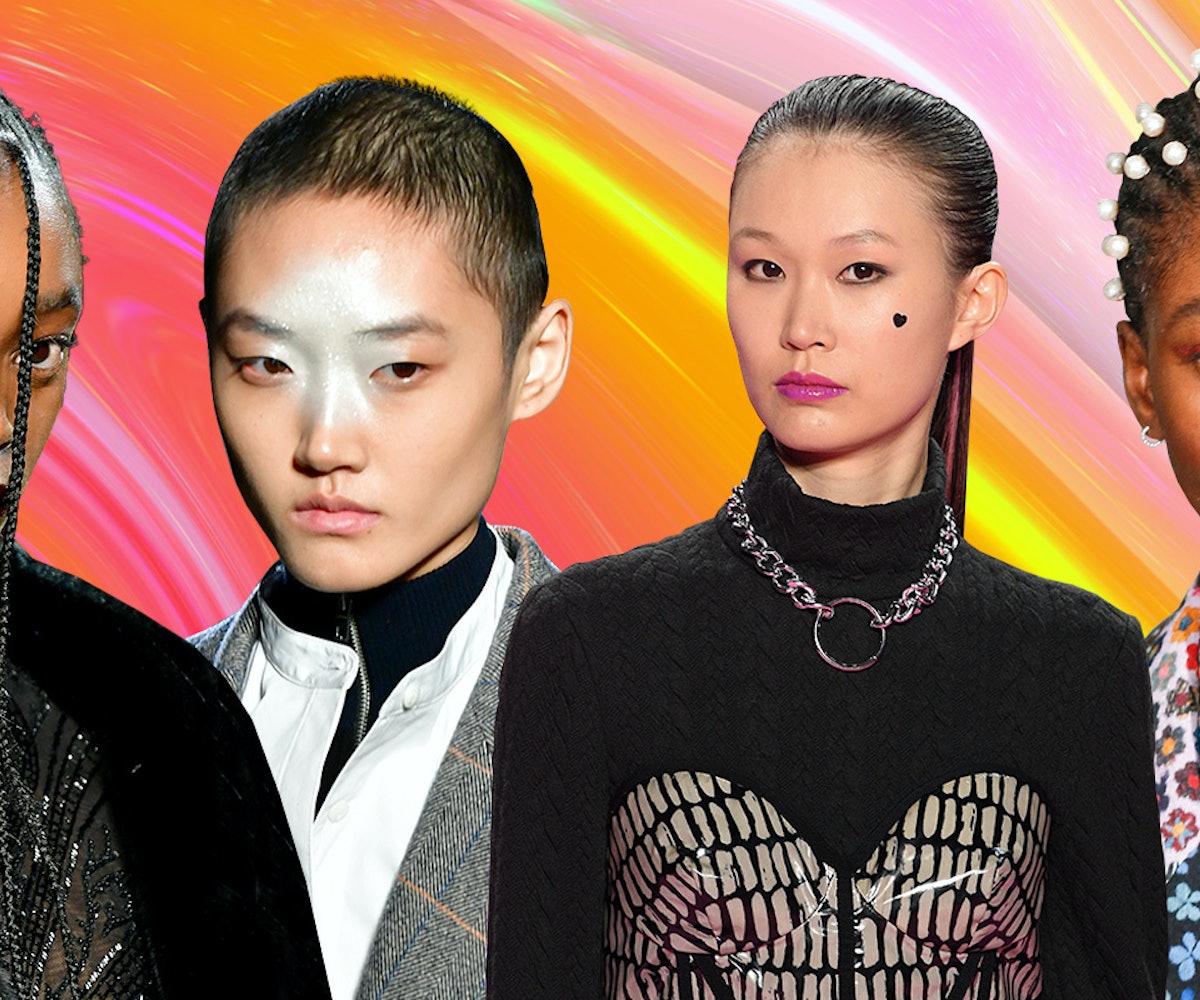 While the big draw is undeniably the clothes, the beauty moments at New York Fashion Week surely hold their own — not only adding to the allure and excitement of each designer's collection and vision, but also becoming an extension of them. This season was no exception, seeing some of the industry's top beauty talent — from Pat McGrath and Odile Gilbert, Guido Palau to Jawara Wauchope — working their magic backstage at the shows of legacy brands and hopeful newcomers alike, creating trends and breathing new life into classic ones at the same time.

For the Fall 2020 season, hair was the anchor and focus of just as many beauty looks as the makeup was, with brands like Christopher John Rogers and Sies Marjan pushing the bounds of reality with gorgeous, sculptural afros and extensions melted and manipulated into headgear. Traditional Black styles were celebrated on the runway as well, with glimmering bantu knots, long rope twists, and cornrow bangs at Laquan Smith and Tia Adeola.

The majority of makeup looks found themselves decidedly at odds — a harsh contrast of pigment quite literally thrown onto the face at shows like Collina Strada, or a simple red lip with clean, fresh skin at a handful of others (see: Jason Wu, Oscar de la Renta, Proenza Schouler). Regardless of whichever direction a show leaned, nothing was boring; and if anything, the variety only made for more inspiration to pick from come fall.

Check out some of the very best beauty moments from the Fall 2020 New York Fashion Week season, below.

Much like the collection — and energy — CFDA/Vogue Fashion Fund award recipient Christopher John Rogers brought to New York Fashion Week, the glam created for the show by MAC and amika was larger than life. Among the different hairstyles and textures embraced in the show, a handful of models took the runway in dialed-up, sculptural afros with the help of hair extensions and geometric cuts. The shape was held with various amika styling products, including the Vandal Volume Powder Spray and the Headstrong Intense Hold Hairspray. If that wasn't enough, a handful of models had their brows glamed-up too, decorated with individual crystals.

More than just creating clothes, Collina Strada creates its own world (and a new story) with every fashion week season. For Fall 2020, the brand was inspired by "the essence of gardens," and carried that inspiration throughout the set, props, and the makeup. Lead makeup artist Allie Smith played with the concept on the face using products by skin-care and cosmetics brand Mad Hippie to create dewy, fresh skin and warm pops of color around the eyes and face designed to look like pollen (!) using the brand's Cheek & Lip Tints in a range of colors.

Everything (?!) at Tia Adeola

For her runway debut, Tia Adeola leaned all the way into every detail — with no beauty mark missed. Models took to the runway with a range of different hair looks, most notably floor-grazing braided ponytails (many being carried by the wearers like handbags) and golden-wrapped bantu knots. The looks were topped off with thin, drawn-on eyebrows and graphic 3-D manicures courtesy of Yukie Natori. According to an Instagram post from Adeola, the beauty for the show was inspired by the late Fela Kuti and the Kalakuta queens.

Jonathan Cohen's garden party of a show was met with delicate and ornate beauty. "This season's girl is effortless, stylish, and loves to make an unconventional statement," shared celebrity makeup artist Grace Ahn, who used 100 percent vegan products from INIKA Organic on the models. "We applied silver and cranberry metallics to the eyes (Loose Mineral Eye Shadow) in a graphic shape with glowing skin and a shimmering lip stain." An easy trend to try at home, the shadow was used beyond the lid to create a winged effect normally created by an eyeliner. Backstage, Ahn suggests wetting an angled shadow brush for better hold and precision. For the hair, the Bumble & Bumble team worked with each model's unique texture, and elevated some of the braided-back looks with large pearl appliqués for a beautiful, 3D statement.

Inspired by — and in partnership with —the newly released DC comic-turned-blockbuster "Birds Of Prey," Siriano sent models down the runway in hair and makeup made for Harley Quinn if she was a TikTok celebrity. Maybelline New York's global makeup artist Erin Parsons channeled the character's look with a subtle twist, drawing Quinn's signature heart tattoo on each model's cheek with a craft store stencil and Maybelline's Liquid Eyeliner. For hair, celebrity and TRESemmé lead hairstylist Justine Marjan created super-slicked, shiny ponytails blended with pastel blue and pink extensions using the TRESemmé Extra Hold Gel.

Makeup was nothing if not pared back for Sies Marjan, with MAC lead artist Naomi Yoshida referencing a, "natural grunge look with eternal mood." Along with bleached brows, the brand's Powder Kiss Liquid Lip Colour in Sorry Not Sorry and Mull It Over were brushed along the lips. According to hair stylist Duffy, Sies Marjan's "raw" casting inspired him to do very little with the models hair — if they had big natural curly hair, or blunt nano-bangs (pictured), he'd leave it as is. "Out of the 38 people in the show, there are 18 we're not really touching," he shared backstage. But leading up to the show, designer Sander Lak was sending the stylist 17th century Dutch masters paintings as inspiration. "They had these headdresses, very classic dutch, white cloth, Darth Vader looking headdresses. We talked about it, but every fabric we looked at looked too literal and too obvious, or too theatrical, so I thought to make them out of hair," he said. Two of the models walked the runway in the finished product, completed using beauty supply Kanekalon hair. "What does it mean? I don't know if it means anything," says Duffy. "I think it's just playing on the idea of what the designer's original inspiration is, and evolving it into something that's maybe more modern."

Set in New York City's iconic Rainbow Room, Gurung's collection — and the show's makeup — was inspired by New York women through various decades, specifically the '30s through the '50s. To see the concept through, MAC lead makeup artist Diane Kendal and her team created four distinct glam looks, varying from a soft gloss, to one playing up geometric, graphic liner. The two most dramatic looks, pictured here, dialed up plays on eye makeup. One leaned into Josephine Baker circa 1930, using the MAC Powerpoint Eye Pencil to line and smudge the lid, as well as using it to create the singer's signature thin, arched brows. The other took on two eye trends at once: all-over blue eyeshadow — using MAC's forthcoming Mint Condition Eye Shadow, available summer 2020 — and a bold, winged liner, using the MAC Brushstroke 24-Hour Liner in Brushblack.

"Drawing on underground cultures, amplifying a new energy of individuality. Beauty that is at once powerful, spiritual and modern," is how Rag & Bone described its Fall 2020 show makeup in a post to Instagram. The inspiration surely comes through in the looks lead makeup artist Lynsey Alexander created for MAC, with some models' faces painted with horizontal and vertical lines around the eyes and nose using the MAC cosmetics Brushstroke Eyeliner in Brushblack, and others with silver, circular pigments airbrushed on the center of their faces for an intergalactic vibe.

A moody, cool look you could wear any day of the week, inspired by Bram Stoker's1992Dracula. "It's a very stark, graphic look with a really dark lip, but we kept the skin very pure and luminous so that it's not too theatrical and it's more wearable," shares lead makeup artist, James Kaliardos, who used NARS Cosmetics for the look. The dark lip was achieved using a trio of the brand's products: the Star Rockin' Precision Lip Liner, Train Bleu Velvet Matte Lip Pencil, and the Liv Audacious Lipstick.

The Blue Moment at Tadashi Shoji

Honest Beauty Creative Color Consultant and celebrity makeup artist Daniel Martin leaned into the beauty world's new favorite color for Tadashi Shoji's Fall 2020 runway makeup: blue. His take, however, wasn't just the typical splotch of pigment. Instead, Martin used a dual-fiber brush to give the outer-edges of the shadow a paint splatter-like texture.

Laquan Smith brings the after-hours energy to New York Fashion Week every season, and his Fall 2020 show was no exception. Lead hairstylist Jawara Wauchope was inspired by '90s R&B girl groups and African hair twists to create a smattering of different looks depending on each model's texture. The runway saw topknots flowing down into long, rope twists, cornrow bangs, lopsided structured ponytails, and micro bangs.

NEXT UP
Beauty
The Best Beauty Looks From The 2023 Grammy Awards
Beauty
This Hailey Bieber-Approved Blush Now Comes In 4 New Shades
Beauty
Bella Hadid’s Clip-less Updo Is Going Viral On TikTok
Beauty
No One Does #PamCore Beauty Better Than Pamela Anderson, Herself
Style + Culture, delivered straight to your inbox.