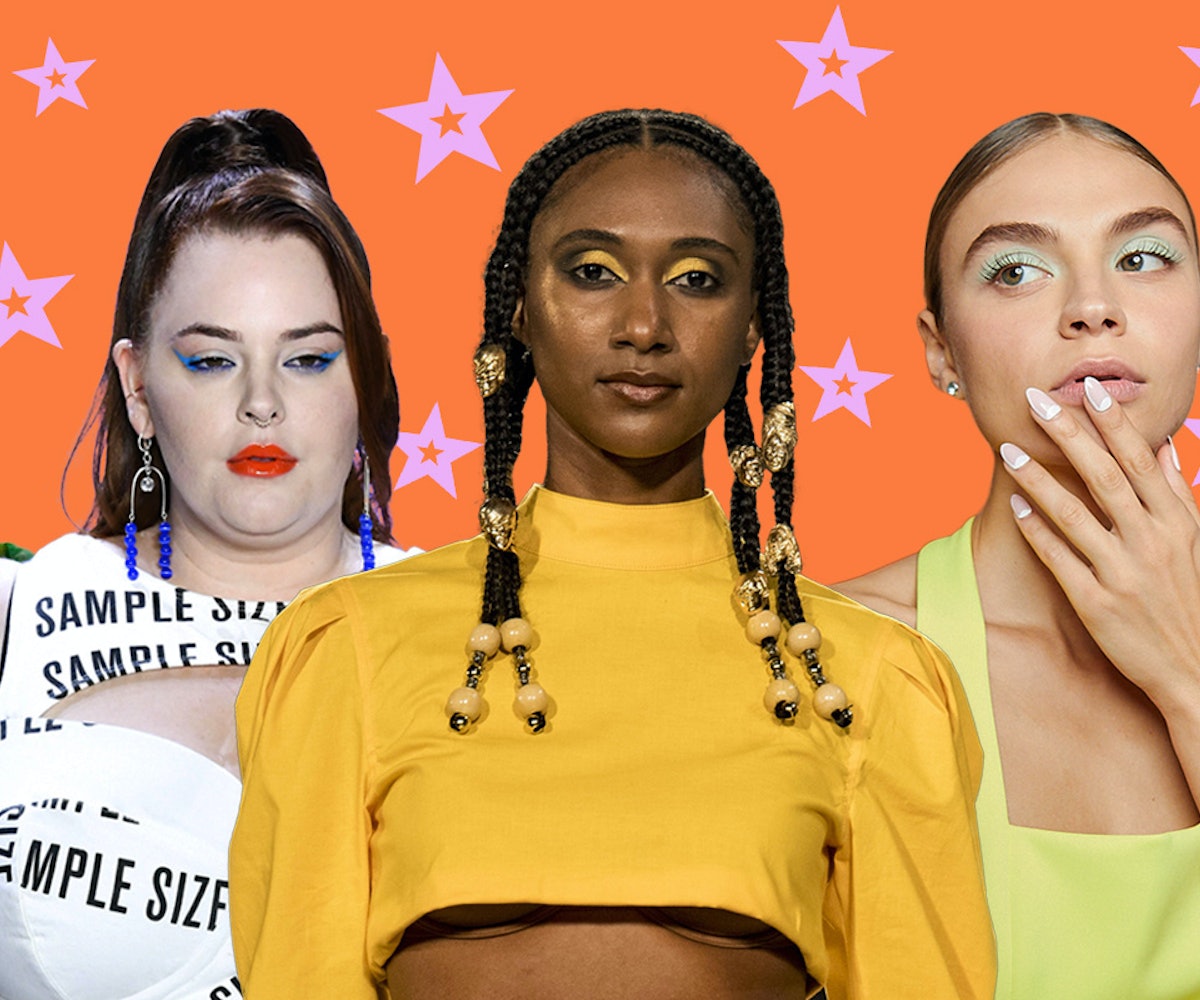 The runway is one of our favorite places to find makeup inspo because most models are in and out of the chair in 15 minutes flat—just like us! This stands in sharp contrast to Instagram makeup looks, which, while stunning, are potentially unreliable or incredibly time-consuming—one-minute videos are deceiving.

And sure, runway makeup can be avant-garde or seemingly impossible to master and is applied by professionals instead of our own two hands; still, though, there are some trends you can adapt into your everyday looks. See our favorites, ahead.

Although the streets say the '90s and the early-aughts are in, the runways suggest that '70s beauty looks are on the way back around. Some of the biggest trends include blush draping—as seen at Pyer Moss, Jason Wu, and Marc Jacobs—where the blush is applied in a contour-like fashion and, in some cases, connects with the eyeshadow. It's a little editorial, lots of fun, and feels very fresh for spring. Seventies hair is in too. Think: roller-set bouffants (Lou Dallas), intricate braids, and pin sets that feel very rock and roll.

Sticking things on your face will be huge come spring if the runways were any indication. There were colored rhinestones at Pyer Moss, cucumber slices at Collina Strada, stuck on stars at Christian Cowan, and added gems at Marc Jacobs. If it sticks on your face and/or sparkles, then you should add it to your collection stat, lest you be left behind.

The Eyes (Still) Have It

If the makeup was any good, then there was probably a memorable eye moment involved. Graphic liner was on countless runways (Chromat, VFiles, and Gypsy Sport to name a few) in an array of shapes, sizes, and hues.

Bold eyeshadow was also a running theme, whether it was an avant-garde eye at Tomo Koizumi or deep shimmery hues at Laquan Smith. Moral of the story: Go for it.

No-makeup makeup will continue to be a thing, runways report. We spotted your-skin-but-better at Kith (and by better we mean "whoops, how did this pink blush casually appear on the apples of my cheeks"), a whisper of concealer and foundation at Michael Kors, and ethereal, sun-kissed looks at Staud. It's the aspirational look looming hazily in the distance, that's surprisingly achievable via micro-concealing, a little blush, and a few dots of dewy, colorless highlighter.

Braids were literally everywhere this season, whether they were cornrows, Fulani braids, or string-adorned. We're taking major inspo from Christian Cowan and Pyer Moss for spring and beyond—if you want to take it to the next level, add hair jewelry.

Pastels for spring? Groundbreaking—especially if it's on the eye. We're taking major cues from Alice + Olivia, where models sported washes of desaturated hues. Other memorable moments were Christian Siriano—it was a watercolor dream—and Jonathan Simkhai, who offered up a wearable take on the trend. If you're a pastel beginner, we recommend taking the Simkhai runway look for a spin—a thin colored liner along the top lash line that can be as thick or thin as you desire.

Everyone's in for a slicked-back, gelled-down spring, and probably a flat-to-the-head summer. There were very flat middle parts at Helmut Lang (with varying levels of volume), a very sleek braid at Bevza, wet-looking ponytails at Proenza Schouler, a slick high pony at Chromat, and a "cordova high pony" at Kith which is basically an Ariana Grande pony with less extensions.

From left: Bevza and Chromat