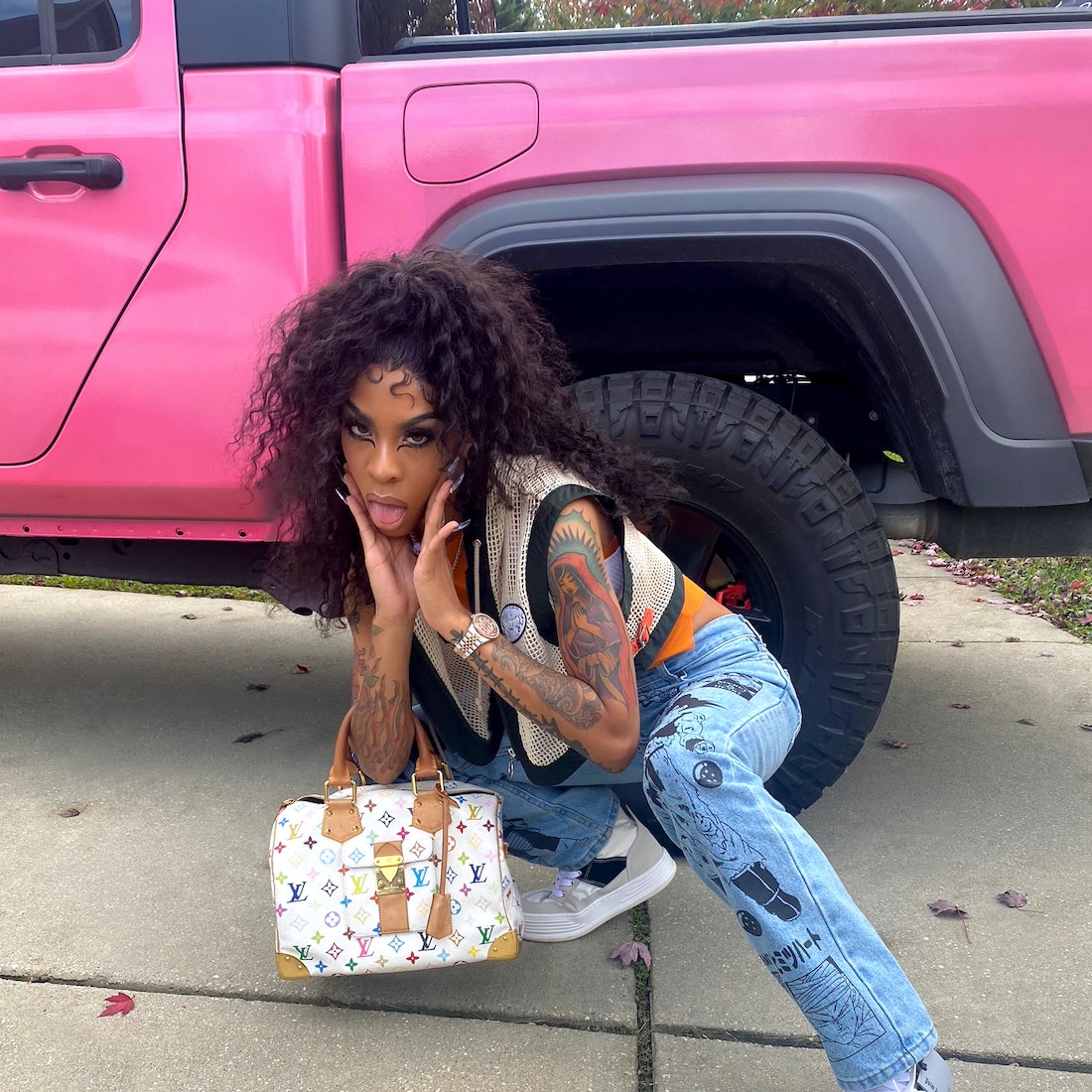 A Night In With Rico Nasty

Rico Nasty is not at home. Instead, she’s in her car, her lips coated in a dark black lipstick and her hair long and blonde. It’s around 8 p.m. on a Tuesday evening, and her boyfriend/manager is driving her home from a busy day in the studio shooting content for Genius and listening back to some unreleased features. Even a global pandemic can’t stop her grind.

When we speak, the 23-year-old rapper, singer, and punk-loving artist is three weeks out from releasing her highly-anticipated debut album, Nightmare Vacation, a designation that she’s perhaps outgrown. The Maryland native has done more than well capitalizing on her numerous and much-beloved mixtapes — like her 2018 breakout Nasty and its follow-up Anger Management — her endearingly spiky online persona, and the mosh-pit energy of her live performances that’s made her shows infamous. But an unprecedented year, plus a host of personal challenges, she later reveals, have unexpectedly made the journey to this album higher-stakes than normal. With its deadline looming, and her mind still not made up about some of the record’s smaller details, Nasty is feeling the heat. (“This'll be the first time in a long time that I actually... I give a f*ck a little bit [about] what people think,” she’ll later say.)

But that’s not what’s at the front of her mind at the moment.

“I have a snake,” she announces with a small smile, looking ahead at the road. It’s her new pet and she’s on her way to meet him, a creamy-scaled albino ball python that she will eventually name Voldemort, for the first time. A friend of hers is picking it up right now, and will be dropping it off at her house soon.

She first “got on this wave, learning about snakes and stuff” during the early months of quarantine, researching the types of snakes that she could potentially keep alive in her Maryland home, where she currently lives with her 5-year-old son, Cameron. Like many of us, that period of time brought Nasty down a lot of rabbit holes, both digital and analog; from Netflix’s Tiger King to picking back up her pre-fame hobby of painting. And, again like many of us, it also introduced its own host of fresh worries and anxieties.

As the music industry reeled from the near-overnight collapse of its live music sector, Nasty was quickly forced to face the possibility of losing the stability she’d built her new life on. A 30-show college tour expected to bring in over a half-million dollars was soon canceled. So was the European tour she had in the works. “Couldn't shoot no videos, album got pushed back, couldn't lock in features,” she goes on. “We couldn't do anything. If I've ever been depressed, it was then. Because in the midst of all of this, yes, I'm worried about corona. Yes, I'm worried about actually dying.” Coupled with the George Floyd protests happening at the time, everything felt like it was hitting too close to home.

So, for a short period, she disappeared off the internet. “It was just a tough time to be Black and it just made me feel like, ‘Bruh, when are people ever going to give a f*ck about how hard we work to get this close and just get knocked off, bro?’” she says, reflecting on that time now. “Oh my God, it was a lot. It was really a lot. [But] if you sit there feeling sorry for yourself, wondering why you're not in this place, you're wasting time when you could be spending that time getting there. I had to really snap out of that.”

That meant turning to what she knew best: making content and reconnecting with her fans. First came selfies from her Savage x Fenty ambassadorship, then promo photos and videos for her first eyeshadow palette launch with the beauty brand Il Makiage. She began dropping singles, like her highly-anticipated collaboration with 100 gecs’ Dylan Brady, “iPhone.” She even dusted off her old TikTok account to join Gen Z in posting trendy transformation challenges and short video memes. On Twitter, she’s back to trolling her fans. And she dove headfirst into livestream performances — a new format that she likens to boot camp: “It's just more intimate so you really can't slack.”

“Every time I feel like I'm bored or getting sad,” she continues, “I do content. Do a TikTok or, you know what I'm saying, make yourself laugh. The best thing I can do right now for my fans is make them laugh.”

Arriving at home for the evening, Nasty makes her way to a small table right off to the side of her front door, one hand still clutching her bag of Chick-fil-A. The small bit of her house that’s visible through Zoom looks airy and grand. She glides under the simple chandelier decorating the ceiling of her foyer as she offers a brief tour of a nearby room that’s bathed in fuschia light. “This is like all my magazines that I’ve been in,” she says, swinging her phone around. “I have the Rihanna[zine], the Fredo [Santana issue from High Snobiety], XXL...” New artwork that she painted during quarantine — canvases with splotches of neon colors that are heavily painted over with figurines and sweeps of black lines — also decorate the walls.

Even before the pandemic, Nasty knew she needed to look beyond her established circle and sound for her debut album. It’s why, even though they’re still close friends, you won’t see longtime collaborator Kenny Beats’ name credited anywhere on the record. “I feel like he and I both knew that if he produced something on this project [people] would have tried to play me and say that, ‘Oh, this sounds the same,’” she says. “He Mr. Miyagi'd me. Kenny was a very crucial part in making me a champion.” But at the same time, “we're not a f*cking duet.”

On Nightmare Vacation, the rapper proves that the essence of her sound still stands toweringly on its own, no matter who’s producing it. Over its 16 tracks, she hammers down on her classic brand of savagery (“Be quiet lil hoe, you ain't gettin' no pesos”) while still stretching the limitations of her own artistic ability. On “Loser,” a track built around an iconic Mean Girls quote, Nasty meets guest Trippie Redd on his turf, spitting all her verses in a sing-songy taunt. She introduces a more subdued version of herself on the Amine-assisted “Back and Forth,” her quieter bars (“You got a smart mouth, Imma put my kitty in it”) still hitting as hard as her screamed ones.

Nasty, however, finds the most success on her many tracks with 100 gecs’ Brady, a creative partnership that’s proving to be a gold mine for both parties. Her already maximalist personality gets turbo-charged when paired with Brady’s exuberant, rule-breaking production. It all arrives just in time to cash in on the hyperpop microgenre trend currently sweeping through the edgiest corners of Gen Z.

Six years into her career, it’s clear that it’s exactly her ability to turn whatever she’s given into her own memeable, sticky anthems that sets her apart as an artist — despite those out there who may still doubt her. “I think that a lot of people don't credit women unless there's a man involved,” she says. “Don't get me wrong, men do play a very huge part in some people's careers but you're not just [gonna] base my whole career off of getting lucky and linking up with some guy who makes my beats bro. No, I write my sh*t, I work hard, I'm creative.”

Earlier this year, Nasty, her son, and her boyfriend attempted for the umpteenth time to finally make the move to Los Angeles. She had the lease in hand and everything — but, of course, the pandemic halted that too. She’s begun to see it as a sign from the universe that, maybe, she’s meant to stay in the DMV for a little while longer.

“I feel like right now there's so many young Black girls from Maryland looking at me like, ’Damn, you probably going to leave in order to leave this lifestyle,’ because a lot of people don't make it out of the DMV ever,” she says, peering directly into the camera. “I just want to make sure that my legacy stands firm, that I never left and I never will leave, and this is my f*cking city. I love it and I run this b*tch.”