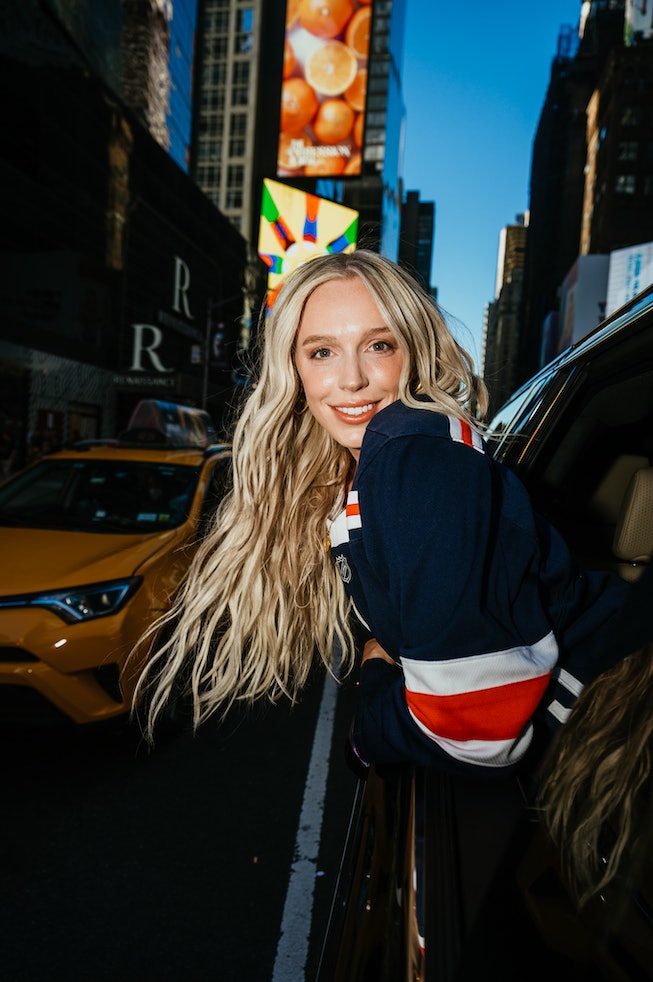 Walking into a bar with Alex Cooper is like walking in with Beyonce, Oprah, and the Pope all at once. It’s almost comical, watching it happen. First, there’s the double take, followed by the mental gymnastics, and then the flicker of the eyelids when it all clicks: yep, that’s the Alex Cooper, the 27-year-old force behind Call Her Daddy who made podcast history in 2021 for her reported $60 million deal with Spotify.

But here’s where Cooper and Beyonce differ: if this was the latter, this is where the interaction would end. Sure, there might be a clandestine blurry iPhone pic later submitted to DeuxMoi, but Beyonce is the type of celebrity who has far ascended approachability. Cooper is the opposite. Once she’s spotted, it’s game on. We’re not two steps into a random sports bar in Midtown before she’s bombarded with requests for selfies and a hug. “My girlfriend loves you,” exclaims a frat bro before throwing his arms around her, while a trio of sorority girls from Villanova shakily ask if they can buy her a shot (she demurs immediately, instead insisting she buy them a round and they all take it together).

This goes on. And on. And on. And Cooper never stops. Not one request for a selfie is denied, no “I love you” unmatched with an “I love you, too.” There’s never a grimace or a half-second eye roll. Not when a particularly riled up fan walking down the street spots her through an open car window, crossing traffic to tell her that her “orgasm episode changed my life.” Not when, mid pee-break at a New York Rangers game later in the evening, someone makes eye contact with her in the bathroom mirror and wordlessly wraps her in a hug. I assume they’re friends. “That’s what my mom always says, ‘Oh, how do you guys know each other,’” Cooper says. “I know immediately. I'm like, ‘You're daddy gang.’ We don't even need to communicate. I get it. It's almost like, where do we begin? We've been through shit."

Cooper could have made $60 million on charisma — and in a way, she did. But don’t think she’s gotten to where she is by sitting down for an hour each week and just talking into a microphone. Episodes can take three or four days of preparation, doing research on her upcoming guest or topic for a few hours at a time. If her interview is at 1 p.m., she’ll be in the studio by 9 a.m. and go over every single question, even practicing reciting them out loud to see if the flow of conversation feels right. The interview itself will take hours. And then comes days of editing. Even tonight, on what is ostensibly a night off for her, she’s adamant on finding the time to talk about Call Her Daddy and its burgeoning empire. Unlike some of her guests, she doesn’t hesitate or stumble once when answering the questions thrown at her.

Who are your dream guests?

Billie Eilish because I feel like we would vibe well. She just seems chill and she's down to talk about shit. Oprah, because one can dream. And Taylor Swift is the goal. We need to start with just the songwriting and go to the past and talk about writing about men. And how I talked about men in the start of my show and we have a lot of similarities in that way. I have [reached out to her team]. And apparently I think there's a chance. She does know who I am.

What guest has surprised you the most?

The first big episode that I honestly think changed the direction of the season was AnnaLynne McCord. She showed the f*ck up. It was the first time I forgot I had a microphone in front of me. I was so shocked by how incredible she articulated trauma in such a personable but also ingestible, relatable way. I would also say that I was really surprised by Julia Fox. That was a wild card. I didn't know what to expect… Everyone was like, “Oh that's Kanye's girl.” And she was like, “This is a minute of my life, and I'm going to keep rocking.” And she has. I respected sitting down with someone who is, "Oh, I'm a muse, or a girlfriend, whatever the f*ck you want to call it, but I'm doing it for me."

Did you feel pressure from Spotify to have another viral moment after “Uncah Jahmz”?

I know when shit's going to go viral. I knew Julia was going to be huge, but it also depends on the moment. Spotify is literally like, "Just send us the episode when you're done." They leave me alone in the best way and they support me.

Cooper knows what makes a good interview, and she takes her job as an interviewer seriously. “I’m not trying to stump people. The goal of these interviews is that we are all human and kind of all can relate, even though a lot of us think we can't, to everyone,” she explains. “But everyone has something you can relate to. Every single person in the world can relate to at least one thing. ‘Have you ever been depressed? Have you ever been sad?’ Everyone in this bar has human emotions. Sometimes people ask me, ‘Why do you want to know [that]?’ It's because people are relatable. Even bigger celebrities I think who are PR trained, they get nervous. But I say, in the day and age of social media, this will be more relatable.” She does not send questions to guests in advance, though many have asked, because the last thing she wants is a canned, pre-thought-out answer. That’s simply not the Call Her Daddy way. “The thing that gets me hard is when someone says, ‘That's a really good question,’” she admits. “I will never forget it when Amanda Knox said, ‘I don't think I've been asked about that moment since the trial.’ And I was like, OK, I am doing my best.”

Still, she takes it all with a grain of salt. She’s not trying to be the next Barbara Walters or catch someone in a lie. “As a show, it’s for entertainment,” she says. I bring up a recent interview with Anna Delvey, who in true Anna Delvey fashion, seemed to speak in half-true limericks — and Cooper let her. “I try to make the people feel excited at home for the show,” she says. “With Anna, I went into that, and I fully knew she's going to steer the ship, and I'm going to let her. I could have asked her what her favorite food is, and it's entertaining. You need to gauge with people. Are you looking to get information out of it, or are you looking to just be entertained? With Anna, you're just going to be entertained. She's not going to admit to something huge in my interview, so with that one I was like, let her go.”

Beyond interviews, which have lately become the podcast’s crown jewel, there is still plenty of what brought listeners in in the first place: Cooper’s personal escapades. When she says she’s “been through shit” with listeners, this is what she means. Her devoted followers know all about her best friend Lauren moving across the country, her vacation fights with Cazzie David, the time she threw up French onion soup mid-sex in Las Vegas. Nothing is off the table with Cooper — or, at least, close to nothing. The aforementioned French onion soup story? That happened with Cooper’s boyfriend, known to fans as “Mr. Sexy Zoom Man.” They may know (some) of the intimate details of their sex life, but they don’t know his first name.

“I think in the beginning it was a secret. I actually don't really care that much anymore,” Cooper explains. “I think I needed to have enough time for myself to actually enjoy my relationship without stressing out about what people have to say, worrying about how we look in the photo, what are we... Oh my God. So I've just made conscious decisions to actually have a normal part of my life, which is my relationship. That's the most important thing to me other than Call Her Daddy and my family. And as much as people were like, ‘Come on, tell us,’ I do think my listeners actually respected it where they're like, OK, wait. You're right. You give us so much and you're still giving us the details. We just don't know who he is.’ He's actually way more open than me. He's like, ‘Whatever you want.’”

Here’s how good of a secret-keeper Cooper, with her 2.2 million Instagram followers, is: For the full three periods of a hockey game, Mr. Sexy Zoom Man is sitting next to her. He’s with us getting drinks during time-outs and when we exit amidst the throngs of people leaving a fully-packed Madison Square Garden. During it all, Cooper is swarmed with fans. And not a single one has any clue that Mr. Sexy Zoom Man is here, in the flesh. (To appease Daddy Gang, I can officially confirm that he does in fact exist, is very tall, very hot, and generally a very fun hang.)

Keeping her relationship private, though not obsessively so, speaks to Cooper’s view of celebrity at large. “I don't see it as celebrity or fame. I think it's cooler to keep yourself on that level because you never know how it's going to end and f*cking humble yourself,” she says. “That's how I live my life. I think that's why I'm with him, because if I wanted to be with this person that had an Instagram following, f*cking taking photos all the time… But we have a very private life because I don't need validation.” You’ll almost never see a picture of Cooper on TMZ, or even DeuxMoi, and that’s for good reason. “I don't leave my house. I literally don't,” she asserts. “I don't call the paparazzi on myself like some people. I think it's not healthy. I want to live a normal life and I think that's why the content can stay the same and I can show up in my sweatpants and my fuzzy socks. I feel like the same person because I treat myself like the same person as that Pennsylvania chick I always was.”

Call Her Daddy is bigger than just Cooper, and she takes that to heart. “It’s more than, ‘Let’s take a selfie.’ It's ‘Hey, let me quickly tell you my boyfriend drama.’ And I feel like they're my best girlfriends for 30 seconds. I want to make people feel seen. Hopefully when I meet them, I can be like, ‘I see you and I love you. DM me. I want to talk.’”

Except, maybe not now. It’s mid-period, tensions are high, and we’ve just asked a very intense New York crowd to stand up so we can get to our seats. That tell-tale look of someone trying to place Cooper crosses over one of our seatmates. I know what’s going to come next. Or so I thought. “Oh, that’s the Call Her Daddy girl,” he says. His date hisses back. “I don’t care, she needs to sit the f*ck down.”

“Please write that down,” Cooper tells me. “I f*cking love New York.”