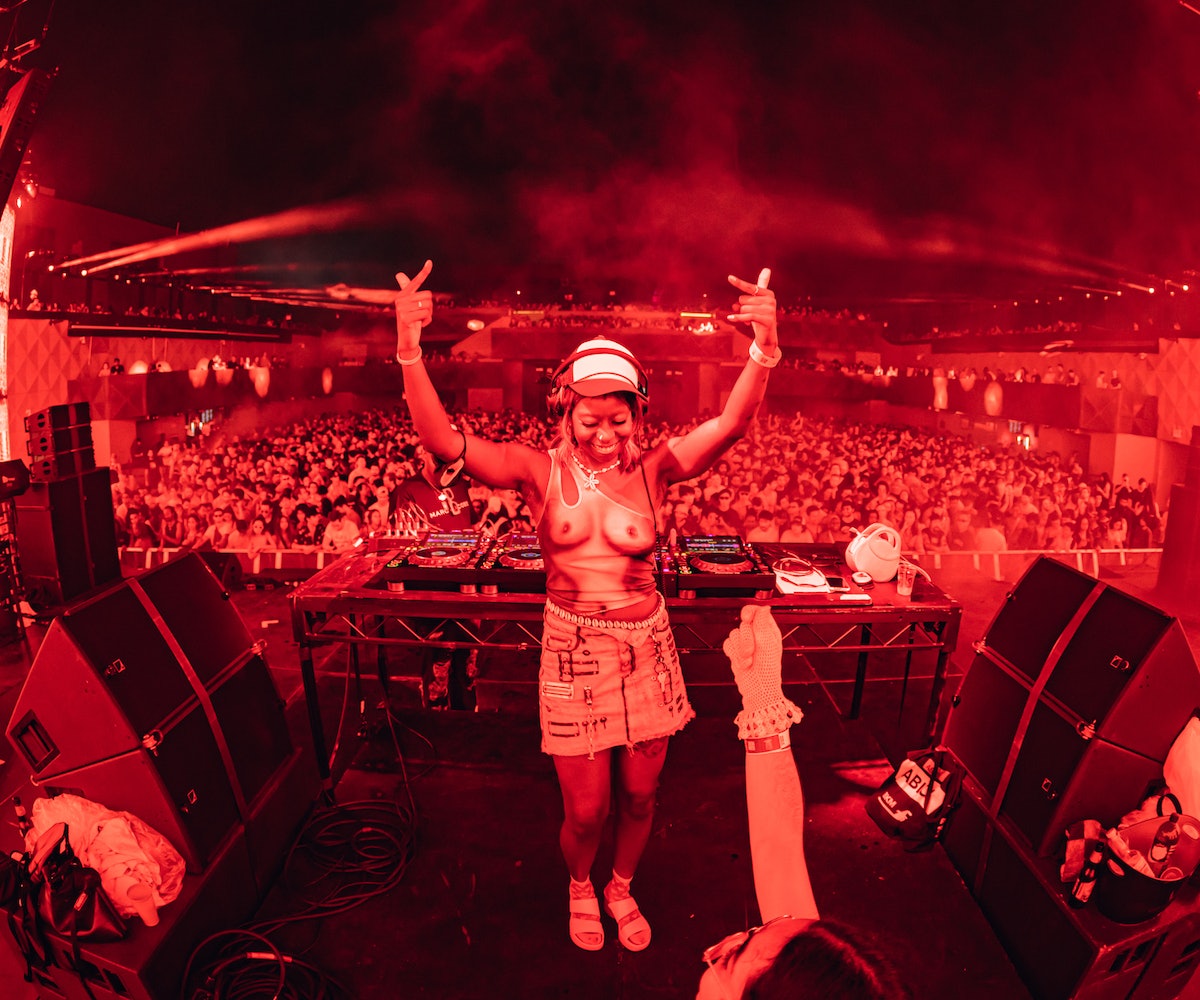 Boiler Room, the long-standing underground music broadcaster-turned-rave organizer, returned to New York City on Saturday with its biggest event yet. From 6 p.m. to 4:30 a.m. on Sunday, a lineup of acclaimed DJs and notable artists, including Bladee, Ecco2k, Denis Sulta, Derrick Carter, Young M.A, Galcher Lustwerk, and more, took over the sprawling space at the massive Brooklyn venues Avant Gardner and Brooklyn Mirage for a night of dancing and debauchery. In an effort to scope out the scene and the current ambiance of Boiler Room — which rose to fame from the intimate settings of their early, stage-less parties — I attended and documented my night. From TikTokers, tech bros, and a lot of fog, here’s what I found.

11 p.m. Because we’re not losers, my friend and I arrive at Avant Gardner at 11p.m., when the party had already been going for five hours. As we weave our way into the body-filled, humid main warehouse room bathed in dim, red light, we realize we have no idea who’s playing, and no idea where to get a copy of the set times. Luckily, after yelling into the ear of some strangers, we learn we’ve come right on time for cult Jersey club DJ Uniiqu3’s set, which is already sending the genre’s springy, raunchy dance music bouncing throughout the space. A bed spring remix of “Thot Shit” gets some people dancing, others standing around blankly, and others moving with their eyes closed, purely vibing. The stage setup — with the tiny producer flanked by tall, VIP onlookers — is clearly trying to recreate the intimacy of early-era Boiler Room. But the real show doesn’t begin until about 30 minutes in, when Uniiqu3 invites a trio of eager male dancers onto the stage. “We’re going to show you how we do it in Jersey,” she shouts. She puts on a bass-busting beat and one by one the dancers start smashing their hips to the beat in a way I can only describe as horny and athletic.

12:15 a.m. My friend and I decide to check out the second stage. Climbing the stairs to the open-air stage Brooklyn Mirage, we realize just how gargantuan the event is. Lines of young people fill the mezzanine walkways watching a black silhouette sing against a blinding LED screen. It’s actually a pretty breathtaking spectacle, though we still have no clue who it is. I think I ask TikTok model Mathieu Simoneau who’s playing on stage, but our interaction is so brief that I can’t confirm. He’s with a pretty girl who’s giggling and responds, “Uh, Ecco2k.” Later, a stranger texts me the set times and I realize why there are so many people here: Drain Gang CEO Bladee is up in 10 minutes.

12:35 a.m. Bladee finally appears on stage through a blur of smoke. All the skinny tech bros in polos and slacks with AirPods still in their ears in the VIP section begin dancing immediately. Ecco2K lingers on stage for Bladee’s show, and they hop around together. It starts raining, but no one seems to care.

12:45 a.m. We return to Avant Gardner where the crowd is waiting for Young M.A. Her DJ is playing a confusing mix of songs like Daft Punk’s “One More Time,” but then he puts on a chopped-up version of Eve and Gwen Stefani’s “Let Me Blow Ya Mind” which puts the crowd into a better mood. Eventually, Young M.A comes out in a yellow jersey set, and begins bantering with the audience. “Where my Bronx people at,” she asks. Booo, goes the crowd. “Staten Island? Queens?” The crowd boos harder. “Brooklyn?” she screams. Everyone erupts. A guy next to me asks his friend, “Is Young M.A from New York?” When she starts playing, it’s immediately clear the vibe is off. No one seems to know the words, and Young M.A keeps stopping the songs after a minute to talk about how much she reps Brooklyn. Her hype man moves to the front of the stage in front of the audience, perhaps in an effort to do his job better. It’s a little awkward to watch. People start pushing past me to leave.

1 a.m. Back at Brooklyn Mirage, we catch the literal tailend of Bladee’s set as he plays his last song and fan favorite “Be Nice 2 Me.” You can’t see anything through the thick fog that has engulfed the pit. The air smells of chemicals, and my friend comments on how she feels like she’s “in a TikTok video.”

1:15 a.m. The fog immediately dissipates and Brooklyn DJ cry$cross chicly takes the stage in a boob-baring shirt. A stampede of white men who look like they hold annual passes to Burning Man immediately fill up the front-of-stage area around us. One guy in a forgettable tank top asks me why I’m taking notes; I awkwardly explain that I’m working. The music cry$cross is playing is good, though, a hypnotizing trance of deep house and funk that gets the twenty people paying attention dancing. It’s humid from the rain, and a guy near me is kind enough to fan everyone around him with the fan he brought.

1:50 a.m. Back at Young M.A, the crowd is apparently, finally hype enough that she plays her most popular song, “OOOUUU,” twice. Everyone is jumping and screaming the song’s most popular line: “You call her Stephanie? I call her headphanie.” It feels like the crowd has been redeemed. She tells everyone how much she fucks with them and gets led back off the stage by someone on her team.

1:55 a.m. Brooklyn DJ Galcher Lustwerk takes the stage in a white shirt, hat, and black sunglasses combo that makes him look very nonchalant and cool on stage. He immediately starts whipping up a strain of silky house that I can only describe as “luxe cruise music” (in the best way!) to my friend. We’re close enough to the stage that we fall into that delicious dance groove that feels impenetrable no matter what’s happening around you. The air smells like B.O., but Lustwerk’s is the first set of the night where we stay for its entirety.

2:46 a.m. I learn at 2:46 a.m. that there’s a third stage, King’s Hall, but I’ve already missed the best act of the night who played there, DJ Assault, from a guy dancing next to me named Nav, 26, a self-proclaimed Crypto venture capitalist. He approaches after seeing me take notes, and agrees to be interviewed. He begins to tell me that this Boiler Room event isn’t that great because there’s too much emphasis on “performance” and isn’t as egalitarian as older events, but he’s talking too fast for me to write it all down. We agree to talk later for a proper interview, but he ghosts me. My friend, meanwhile, is enraptured by a mysterious white woman on stage with Lustwerk who’s dancing with a duckface. We watch as she tries to talk to him a few times but he seems uninterested. Who is she?

2:50 a.m. We are slowing down. Famed Chicago DJ Derrick Carter, in a BDSM-style black utility vest, comes on stage to cheers and applause, but half of the room has already emptied out.

3:00 a.m. It’s foggy, sweaty, and debaucherous at the Brooklyn Mirage stage, but there’s still a hearty crowd. The floor is covered in a layer of plastic cups and smashed cans, and everyone I make eye-contact with looks dazed. I ask two people who’s playing and neither know. The second guy, shirtless and with his dreads pulled up, tells me we should make up a name for the DJ. We come up with “Bionic F*cker” — though there’s absolutely no correlation — which makes him laugh. Sometime around 3:30 a.m. it begins to lightly rain, sparking a renewed “woo” from the crowd. The shirtless guy has now formed a circle with some girls as they raise their hands dancing in and out. The music, much more bright and buoyant than all of the sets we’ve seen that night, delivers everyone until closing time. The next day, I Google and learn that the DJ was Denis Sulta.

4:30 a.m. The last open food stall, Fox Hole, has closed. Exhausted, sweaty, and legs aching, my friend and I decide to leave. Ubers are $50 to Bed-Stuy so we walk to Flushing Ave. where the price drops to $22. At home, we shovel cold curry and rice into our mouths in the dark, sharing a spoon. Nothing has ever tasted better.