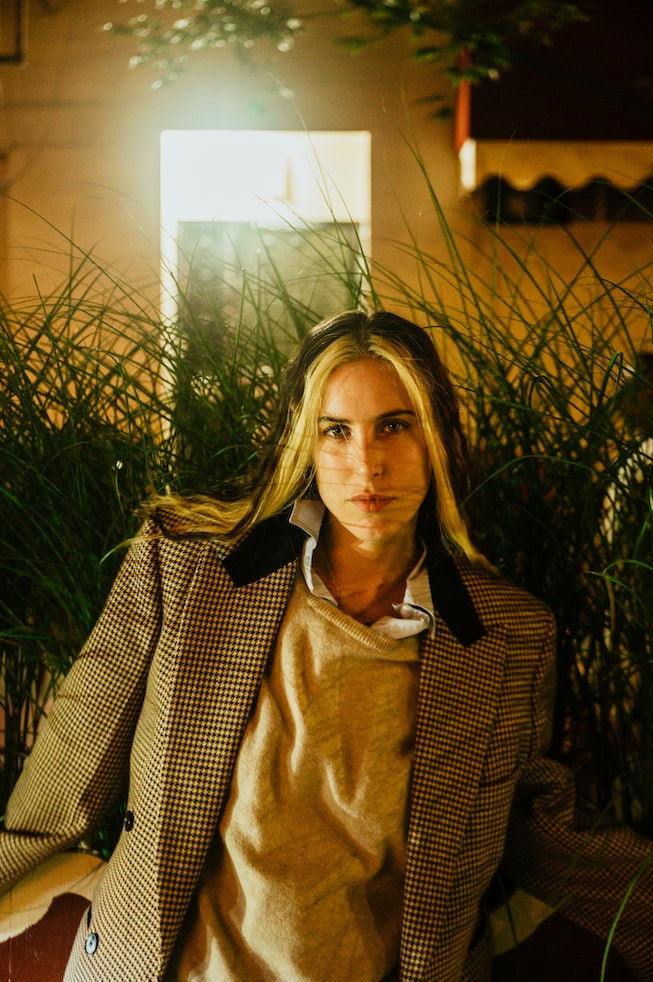 Scout LaRue Willis is back in her old stomping grounds. While the 30-year-old singer now happily resides in her native Los Angeles, she spent her formative mid-20s in New York City — and tonight we're having dinner in the neighborhood she used to call home, the small slice of the Lower East Side and Eastern Chinatown between Canal Street and Division that now constitutes the infamous Dimes Square.

Things have certainly changed since Willis lived there back around 2016. Forgtmenot, Scarr’s Pizza, and Kiki’s are all still staples, packed to the brim each night with young creatives and their friends, but new places — like the one we’re dining at, Le Dive, a cozy new Parisian-inspired natural wine bar from veteran restaurateur Jon Neidich — have cropped up everywhere. And the tiny micro-neighborhood isn’t the only thing that’s undergone a transformation. Whereas Willis used to hit places like nearby actual dive 169 Bar, getting the classic shot and beer combo before dancing the night away with her friends, she’s now found a new sense of freedom and clarity in sobriety, which helped usher in a prolific period of music-making, culminating in her self-titled debut album, out now.

“I think my energy really matched the city for the first two years I lived here,” Willis explains over fries, steak tartare, and strawberry sodas. “LA was really tied up in family stuff. And then, as family stuff was getting better and better, LA also felt safer and better and more interesting.”

Willis, daughter of Demi Moore and Bruce Willis, has already lived a full life. After graduating from Brown and moving to New York, the singer tried her hand at a few different careers. “Even though I knew I wanted to do music, I also thought I needed a real job. I worked for [luxury designer] Lindsey Thornburg for a little while. I worked in interior design. I was all over the place.”

Her move back to California coincided with a deep dive into spirituality and psychological healing — themes that she examines throughout the album. It’s also, notably, about love. “This album was a series of events in my life that were really growth-provoking,” she says. “Falling in love with someone, and creating an entire story about it. I literally had a full relationship and breakup in my head, without ever kissing this person.”

She’s currently happily partnered in a five-year relationship with fellow musician Jake Miller, but Willis explores the toxic side of love on songs like the contemplative “Love Without Possession.” On “Woman At Best,” which Willis describes as “a love letter to sacred feminine rage and sexuality,” Willis declares her fierce independence in lines like, ‘And I will pass this test/’Cause I know I am strong/Won’t call out your name/I just sing out this song.’ Her powerful, full-throated vocals, haunting guitar chords, and the carefully considered poetry of her lyrics paint a picture of a young woman coming into her own, inhaling and exhaling her innermost feelings like a breath of fresh air in an otherwise noxious environment.

“When I went back to LA, I went through, I would say, awakening and actualization, through a lot of spirituality.” The album, she says, “is kind of the arc of a relationship, in a way — breaking up, and feeling that yearning and that very liminal space of we're not together, but we're still hanging out.”

She also investigates themes of love addiction, or “themes around what it means to be addicted to someone, and what it means to be in love with someone's potential, rather than who they actually are.” While her music is laced with traces of ‘90s singer-songwriter heroines like Paula Cole, Alanis Morissette, and Fiona Apple, there’s a distinctive twang to her songs, too — something Willis credits to cowboy ballad auteur Marty Robbins.

It was Robbins she was listening to when she wrote “Canyon,” which she describes as “a song about wanting to be with someone, but knowing that you're at a place where, if you're with them, you will need them and be codependent. So you have to be by yourself.”

During our conversation, Willis’ sentences are imbued with the language of recovery — the album is even tuned to 432 Hz, a known frequency of healing. In addition to completing a master’s degree in spiritual psychology along with her mom and sisters, Rumer (33) and Tallulah (28), at the University of Santa Monica — which Willis says helped her “finally really let go of the stories that I was holding against myself, which are part of what allowed me to finally make my album” — she also embarked on a vision quest ceremony that radically changed her life. As we finish up dinner, deciding to skip dessert before heading across the street to check out the scene at 169, she describes how being alone in the woods for four days and nights with no water or food, just prayer, changed her. “I had such unbelievable clarity,” she says.

“I used to live my entire life [where] my secret ethos was, ‘Don't make anyone uncomfortable ever. Do not rock the boat. Be quiet. Say nothing,’” she continues. “And I didn't really put myself out there. And now, for my art, this whole other part of me is here, that’s like, ‘Look, I may trigger you. You’ll end up working on it later. You're welcome.’"

Take, for example, the response to her “Woman At Best” video, which she made with an all-female crew. In it, we see a long-haired Willis dancing and raging around her home, stripping down to white underwear and socks and smearing herself in the juice of a bowl of red cherries, and caressing herself with a single red orchid (an homage, she says, to the 2002 Josh Hartnett film 40 Days And 40 Nights). While embraced by her fans, the video also drew some negative attention from shaming critics, “a few articles that were so minimizing.”

“I wanted to be really angry and sexual, but not for the male gaze,” she says. “It's a woman alone in her house, expressing, and being joyful, furious, delighted, and just everything at once. And I was dancing, which I never would have done before any of this. I'm in my underwear for some of it, but barely any of it. But it is quite sexual. And I had a feeling it was going to be confronting for people, but not to the magnitude that it was.”

But Willis just lets it roll off her back. “When you see someone who is doing something that inside you have not given yourself permission to do, that's an unconscious thing. It's so much easier to be like, ‘Stop that person. They shouldn't be allowed to do that,’” she says. “It was vulnerable, but I didn’t take it personally.”

On “Shouldn’t I Be,” a particularly insightful song on an already highly perceptive record, Willis describes “not feeling f*cking good enough, but being done with that feeling.” While “there’s nothing that wraps it up in a neat bow” lyrically, the orchestration leaves a feeling of hope, which Willis describes as a feeling of “triumph.”

“The lyrics are saying, ‘I'm still in it,’ but the music is saying, ‘I'm done. I'm done with this feeling. And I'm transcending it even now.’" Lyrics like, “Shouldn’t I be better now/And stronger now/And taller now too/More beautiful/And braver too,” tell a story many of us are familiar with.

Instead, she says, she aims for neutrality. “I'm all about radical integration and acceptance of me, even my toxicity,” she says.

As I hunt for my ID in my bag, Willis dips into the crowded 169 Bar to see how the old haunt is doing. Before I can even locate my card, she pops back out and tells me not to bother. ”It’s just not the vibe anymore.”