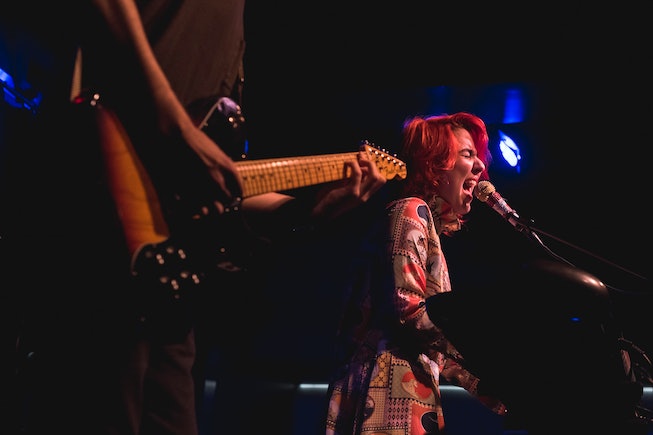 Every Friday night, Sam Behr scrolls through Spotify while on the train from Bedstuy to NoHo to make a setlist for the night, which includes everything from Blue Swede’s “Hooked On A Feeling” to The Weeknd’s “Can’t Feel My Face.”

Behr is the Friday night pianist at The Nines, Manhattan’s new piano bar and supper club, a place with wall-to-wall cheetah-print carpeting, red velvet drapery lining the walls and a line that runs halfway down the block, where celebrities like Bella Hadid drink $26 cosmos and eat 30 grams of caviar on a baked potato. (On that note, the burger, with raclette and black garlic, is sensational.) “I kind of want people to know we’re here,” my friend said as we gawked at all the attractive financiers ordering bottle service around us. “Also, does everyone here know each other?”

“It feels like a scene in a Tarantino movie every time I walk in there,” Behr tells NYLON, describing the gig as “f*cking awesome.”

Behr isn’t your typical piano bar singer. She dresses entirely in bright red to match her highlighter-colored hair, which matches the room’s burgundy walls and velvet seating, as she plays a collection of piano bar standards on a gorgeous Yamaha Grand: a lot of Beatles and Bowie, while also effortlessly whipping out covers of Kate Bush and No Doubt songs you never thought you’d hear while sitting next to real estate moguls eating foie gras.

“The number of famous people I’ve seen at this bar… I try not to get starstruck and I’m terrified of making a fool of myself,” she says. “It's an easy room to connect with people in. It's very intimate. There’s a certain vibe where everyone’s very friendly with one another. I’ve always met someone interesting.”

Though Behr has made herself at home in the lavish setting, The Nines is the first bar she’s regularly performed in that’s not a dive. Behr is, by any standard, an expert performer. She tells me she recently calculated the number of hours she’s spent performing and it was well over 10,000 since getting her start eight years ago, before she was legally old enough to drink in the bars where she was performing.

Behr got her first regular piano bar gig at 19, and ended up dropping out of Berklee School of Music because she was learning more about music from gigs than she was in class. She moved to New York City in 2016 after her Boston piano bar opened up a location in Times Square. The club lasted for only about a year, so Behr started playing at a dueling piano bar called, funnily enough, Bar Nine, in Midtown.

“When I first started, a dueling piano show was kind of a dirty old man scene. It was like embarassing people with sexual songs on their birthdays and stuff. Very campy,” she says. “These guys were the ones who trained me and I had to get rid of what I learned from them in terms of how you interact with the audience. That took awhile, but after a few years, I finally got my bearings and started to feel comfortable to be myself onstage.”

Besides her bold outfits, being herself on stage also means embracing the challenge of a request-based gig. She prefers songs that don’t necessarily translate well to piano, which often leads to her making up an arrangement on the spot.

But despite being an expert at the beloved songs of others, Behr is also ready to sing her own songs. Alongside her gigs at The Nines and Bar Nine, Behr is working on original music. She built a recording studio in her basement and is working on a 10-song EP, which she’s producing entirely herself, after she taught herself to engineer her own sessions over the past two years.

“I’m very much comforted by the fact that I can always do gigs like this,” she says of The Nines. “There will always be songs people want to hear, but the goal is definitely to pursue a life performing my own music. I'm 27 years old and constantly telling myself, ‘You gotta get it done.’”

You can expect Behr’s album in the fall. In the meantime, you can find her at The Nines on Friday nights.

NEXT UP
Nylon Nights
A Night Out With Uffie
Life
Channel Tres Brings The Mellow To Miami
Fashion
The Best Clear Bags For Concerts That Won’t Ruin Your Outfit
Entertainment
How Conversations With Friends Chose Mitski, James Blake & More For Its Soundtrack