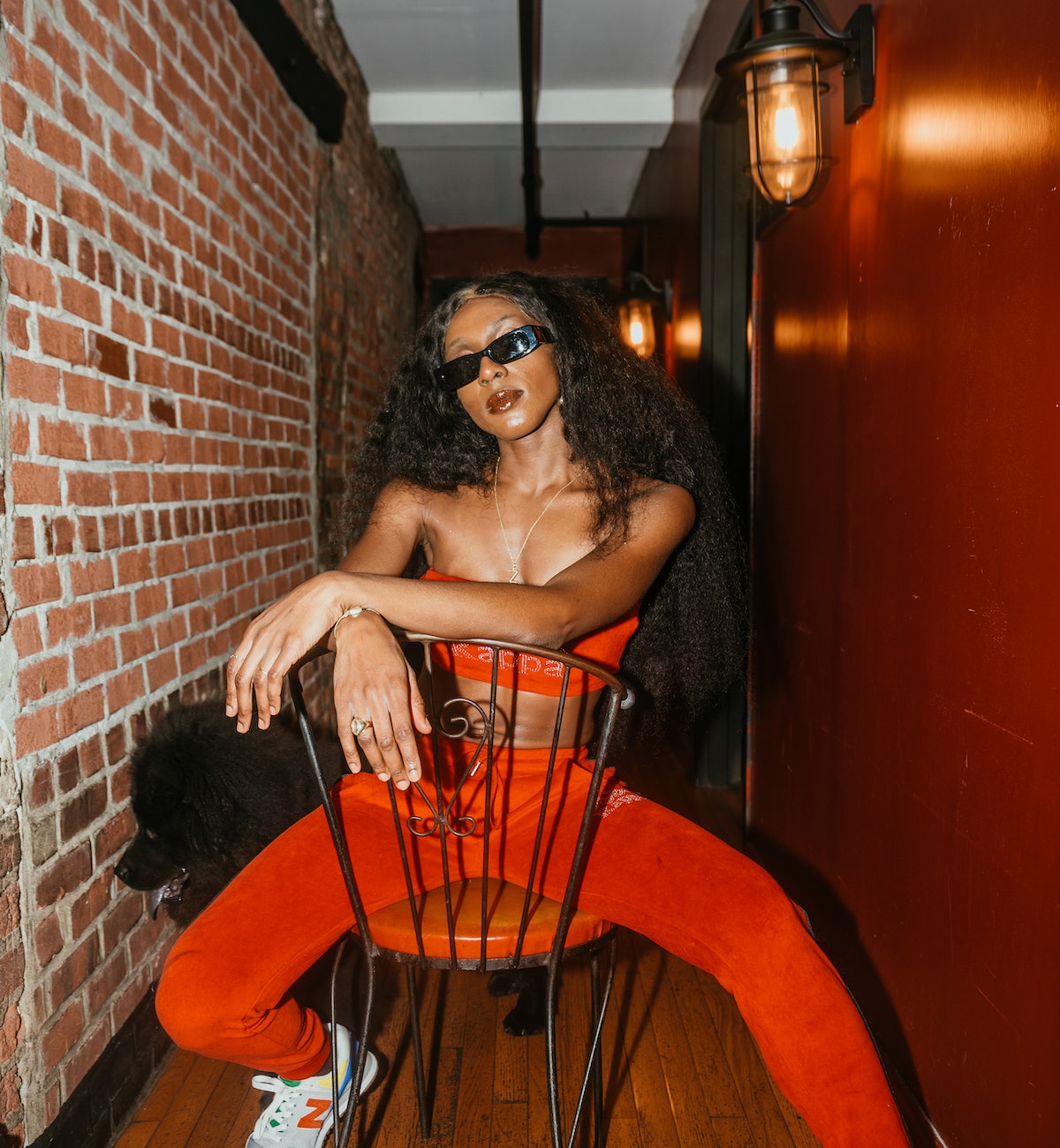 There’s a palpable buzz in the air surrounding Ziwé, as the comedian runs around the Music Hall of Williamsburg one hot Saturday afternoon in June, prepping for one of her sold-out POP variety shows. Clad in a blood-red Kappa velour set with a pair of rectangular black sunglasses perched low on her nose, Ziwé is running the show in every sense of the word. One moment she’s doing a mic check on stage, with a massive projection of her mononym behind her. The next she’s leading her stunning black Chow Chow — named Celine Dion, she tells me — upstairs backstage to the greenroom, where her frequent collaborator, the artist Jen Goma, lounges in a matching two-piece bandeau tracksuit. As we head outside to grab a few pre-show pictures in the fading Brooklyn sunlight, we pass two assistants blowing up a massive inflatable rainbow unicorn for the show later that night.

In front of the venue on busy North 6th Street, Ziwé’s presence immediately commands attention. Fans are beginning to line up outside, and as they spot their star, their eyes widen as they shout out praise. She upstages the cumbersome construction in front of the Music Hall as she poses mid-traffic, and a white guy on a scooter passes by, making sure we all hear him say, “So fine, goddamn!”

During the pandemic, Ziwé’s Instagram live “Baited” shows became one of the few sources of pleasure in an almost pathologically bland entertainment landscape. At the height of 2020’s cultural racial reckoning, putting people on the spot became her forté, as she asked guests — many of whom had experienced some form of so-called cancellation — impossible questions that were designed to entrap. Her viral fame turned into her very own show, Ziwé, on Showtime, where she also got her start as a writer on the beloved Desus & Mero from 2018 to 2020.

Now halfway through its second season, the one-woman talk show retains much of that original cringe comedy, raising the stakes with irredeemably problematic guests like Chet Hanks. (Clips of their interview sent the internet into a tailspin earlier this year.) But the series is as much about its host as it is about the conversations, and it highlights Ziwé’s unflappable air of authority as a gateway to pure jokes.

The POP Show is drenched in the aesthetics of, naturally, pop culture. There’s a PowerPoint presentation where Ziwé catalogs the perks of being a pop star — which include fame, fortune, paparazzi, haters, and fedoras — and another in which she laments the low rating she has on the infamous celebrity foot fetish website, wikiFeet. The show opens with a clip of Britney Spears’ “Baby One More Time” and includes fully choreographed renditions of Ziwé originals “Am I Gay?” and “Stop Being Poor.”

Ziwé’s speaking in the language of her audience, who eat up every moment of the show, but it’s for her, too. “It’s really honestly very cathartic to write these songs,” she says. The day before the show, the Supreme Court voted to overturn Roe v. Wade, and it adds a solemnity to the otherwise absurd show. Writing songs like “Stop Being Poor” helps the comedian “process the news. How do you process the news without making art? At least from my perspective, it helps me understand the world that I exist in and cope with it.”

Head Ziwé writer, the comedian Jo Firestone, does a stand-up bit, and Larry Owens belts out a tribute to his Zoom sessions with his therapist, Marjorie. There are nods to the livestreams that first made Ziwé famous, including a bit with her friend and past Ziwe guest, the comedian Adam Pally. As the pair sit side by side on stage with Pally fiddling around on a guitar, Ziwe asks him to “play a Black note.” As he reluctantly plucks out a bluesy chord, the crowd boos, and he chides them back, saying “You get up here and do it then!” But it’s clear Pally is in on the joke. Though Ziwé reigns queen of her extended universe, she’s a benevolent leader; there to challenge conventions, yes, but mostly to laugh.

It’s also a return to Ziwé’s roots as both a stand-up and an improviser. “Doing live shows prepares you for doing any show,” she says. “Live shows are like the gutter; it’s grassroots.” She notes the hard work of putting on a live performance prepared her for creating her own show for Showtime. “You’re calling people yourself. You see me prepping and talking to sound, and you realize how many teams are involved in creating a live production. It taught me how to book talent. Chet Hanks is someone I reached out to via firstly DM, and then I texted him. Like Bowen Yang, Patti Harrison — the people on my Showtime show, I booked myself.”

This DIY ethos might surprise someone judging Ziwé’s life based purely on, say, her Instagram. As someone who hit a certain amount of fame through social media, she’s hyper-aware of the boundary between the Ziwé people see online and the person behind the performance. “I believe that it’s like, we wear the mask,” she says. “You are a character; you’re a persona. Anyone who exists publicly and privately, there are two different selves. The private self might dance in front of your dog, but you might not do that publicly. So for my case, it’s really just scaled. You really see the distinction of having many people interact with this public persona versus me in my house, scrubbing my dog’s poop out of the carpet.”

The second half of Season 2 of Ziwé hits Showtime this year, and though both the premiere date and the guest list are strictly under wraps, she says she’d love to have both Kim Kardashian and Ted Cruz on the show. (“I’d love to ask him, how does he sleep at night?”) Despite the certainty with which Ziwé conducts herself (and her interviews), she says she’s as much on the edge of her seat as her audience. “I’m eternally surprised by my guests,” she admits. “As much as my guests have no idea what I’m going to ask, I have no idea what they’re going to say to me, honestly. And so the conversation is organic and real. I’m constantly stumped. The silence isn’t added for effect. It’s me literally being like, ‘OK. I’m processing the words that you’re saying.’ Truly.”

As Ziwé looks toward her future, she remembers her classically millennial childhood dreams of being either the president of the United States, or, of course, a pop star. “I think I want world domination,” she says. “Just a really incredibly powerful woman. I think the world needs more of those.” Although she’s currently living the new dream of turning social media fame into a full-fledged entertainment career, she’s careful to point out that it didn’t come as quickly as the pandemic-era-star label makes it seem.

“They say that it takes 10 years to become an overnight success, so I’ve been working for a very long time,” she explains. “It’s really great to have my work be validated. But really, it’s just like, if you look at it too macro, it becomes overwhelming. I just try to take a day at a time.”

Ziwé’s next live show is on Oct. 14 at The Wilbur in Boston.