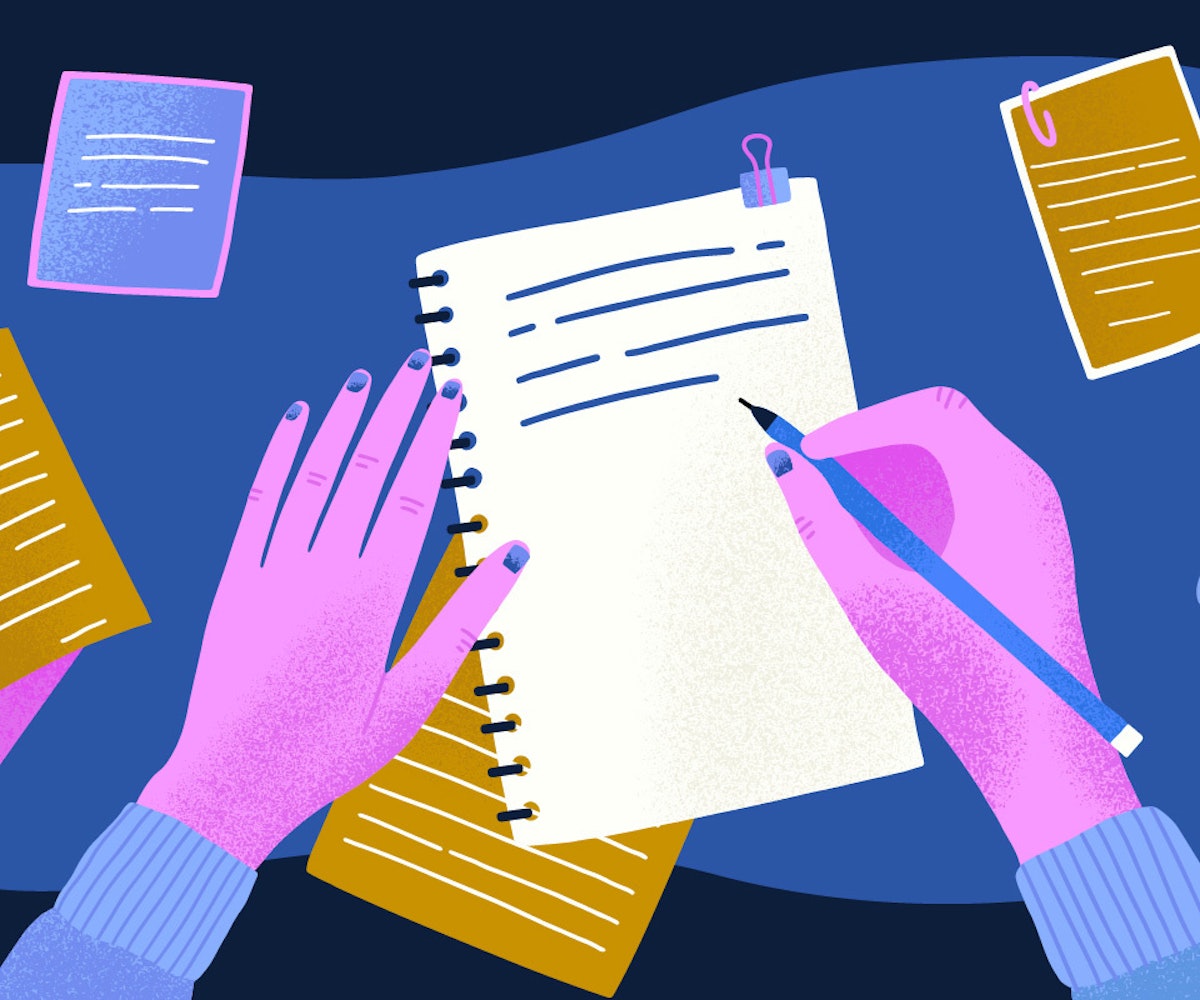 Over the last seven years, I have moved six times. Every single time, I have carried 10 to 20 boxes of notebooks, photos, tickets, and other random ephemera that I've accumulated over my not-too-long life. My phone, too, is full of tracking apps and lists. I became obsessed with keeping records when I was a young child and first became aware that, well, things ended. I remember realizing: this year at school, this summer, this friendship would end. (I was also very young when I also became obsessed with legendary diary writer Samuel Pepys and had the idea that I could chart what life was like for "a normal(ish) 9-year-old in 2002 England," so.) But, while many of my diaries are pretty normal, chronicling my crushes and upsets over the 15 years I've been keeping them, a lot of these records signal a darker, more obsessive edge to my record keeping.

For one thing, I've realized that I literally just cannot stop—and even still dwell upon anything I might have missed. I know there's one week in 2008 which I still haven't written down, and I regularly consider filling it in my diary. Not a day goes by when I don't keep some record of my activity, be it the food I ate, the thing I did, the money I made. My records extend to lists, spreadsheets, photos, apps... and, amidst it all, is the heart-stopping anxiety and guilt that I feel if I consider just stopping. We all record our lives to some degree, and phones have made that even easier. But, for me, what began innocently enough, with a keen need to record the ever-passing march toward death (I was a morbid child!), became obsessive, as most things did.

I have suffered with Obsessive-Compulsive Disorder (OCD) for as long as I can remember, and my OCD is likely to be blamed for the immense guilt I feel if I miss a diary entry or skip on my spreadsheets. My memory is already very good, and while that comes in handy, being able to recall traumatic events or nightmares from when I was three only adds to the dark cloud of fear and guilt that hangs over me.

Once I write something down, I remember it. That's helpful, obviously; a lot of my list-keeping and organizational skills stem from having ADHD, and are, in part, the only way I can force myself to get anything done. As a freelancer, too, being organized is important—the ability to not only retain information but to double-check it is invaluable—but it comes with a side of massive anxiety and overwhelming sadness when I can constantly recall everything about my life.

When I was a young child, the nightmares that I was having nightly (and still have) started to drastically affect my day-to-day life. A well-meaning childhood doctor suggested I keep a dream diary, and that became another obsessive way of chronicling my internal life and to check it against that day. I not only still suffer from those anxious nightmares, still wake up at night screaming, but I can remember the ones I had when I was just three years old.

But, in a lot of ways, these records are comforting. I have hundreds of thousands of photos from my entire life, tens of diaries that chronicle everything I've ever done, screenshots of messages from old friends. When my friends want to remember something about their own lives, they come to me. I even publish a zine using these "archives." But what I don't publish—what I never have—are the records that aren't funny or amusing. And, honestly, that is most of them.

When I was 17, the eating disorder that had been forming in my young, self-conscious brain throughout childhood, really showed itself. I'll spare you the triggering details, but, simply put, I was in the gym for several hours a day and eating next to nothing. My quality of life dropped dramatically, and what made it so easy to get to that point was that I was also recording my every bite and move in weight-loss and food-tracking apps. While I'm on the up now, I struggle to not do that again; even if I don't want to lose weight anymore, the impulse to record everything is still strong—but I know that it only leads to me competing with myself.

Records, goals, lists... these are all good, helpful things. In small doses, they help with my development and enable me to remember my life. But in combination with my OCD, general disposition, and dormant eating disorder, they make it difficult to live in the now. I often wish I could just wipe everything clean; forget traumatic events, forget my neuroses, forget horrible things I've been told. I tried doing that as a 14-year-old, when I was going through the worst time of my life; I decided to stop recording the bad. I wrote about my day, but only what I had done at school. Still, the records prompt me to remember what was happening in the background. That, and after so long training myself to remember, it's impossible to force myself to forget.

Ironically, while I use lists and records as a way to improve myself, looking to the past is the enemy of progress. While my eating disorder is better now, being able to recall my exact weight on a certain day is damaging. While my life and the people I'm surrounded with are better than ever, being able to remember long-forgotten days or friends is a stab. Recalling failures, how sad I once was, these are all things that force me to live in the past. We are all guilty of wanting everything at once. I am happier now that I'm older, but I panic over every sign of a wrinkle, scrutinizing photos from a time when I was definitely more miserable, but, hey, I looked younger? I am terminally vain and self-obsessed, and being able to recall what I looked like on any given day in the past is not good for my mental health. I am terrified of change, but I love progress, and I find it hard to understand that change is progress.

I spoke to Jon Abramowitz, the editor-in-chief of the Journal of Obsessive-Compulsive and Related Disorders, for more insight. He believes that if this record-keeping is starting to impact on someone's life, as it often does with mine, it's "not mentally healthy." He tells me that "forgetting is something we do all the time," and that our brains have an automatic memory bias that makes us not forget things that are dangerous. This is interesting, because, to my OCD-addled brain, everything seems dangerous. I will remember unnecessary details related to things I'm frightened of, and recording them doesn't help. Abramowitz recommends trying to "be more flexible and let nature take over regarding what you remember or not," and to just record things that I enjoy, rather than obsessively tracking everything.

I also spoke to Esther, who also has OCD. She told me that OCD expert Dr. Reid Wilson once said that people with OCD "fill our minds with information that is unnecessary." She adds that "OCD hates change, it hates uncertainty," and that the anxiety I feel when I stop recording or stop giving in to my obsessive impulses is good: "If you change something and feel a 'zinger' [a spike of anxiety], it means that OCD took a shot. It doesn't like change, but it's how we get better!" Change, and learning to be unafraid of losing control, is an aspect of OCD recovery that I still struggle with now that I'm much "better."

Many of my notebooks are filled with my fears, with my exact weight and food intake that day, my goals. They have become a graveyard for all of the time I've wasted trying to be "perfect"—to be thinner, more organized, trauma-free. Some of the record-keeping has led to good, and I am glad I get to share my diaries with the world, but at what cost? Prior generations, with less technology to record, could only track what they really wanted to. We have infinite capabilities for record, which can be a positive thing, but at what point does this tracking hold us back? As much as I have learned to appreciate my skill for remembering, I am desperate to forget. But as someone who grew up believing that my ADHD-addled brain was a deep personality flaw, it's still hard to see forgetting as anything other than failure.