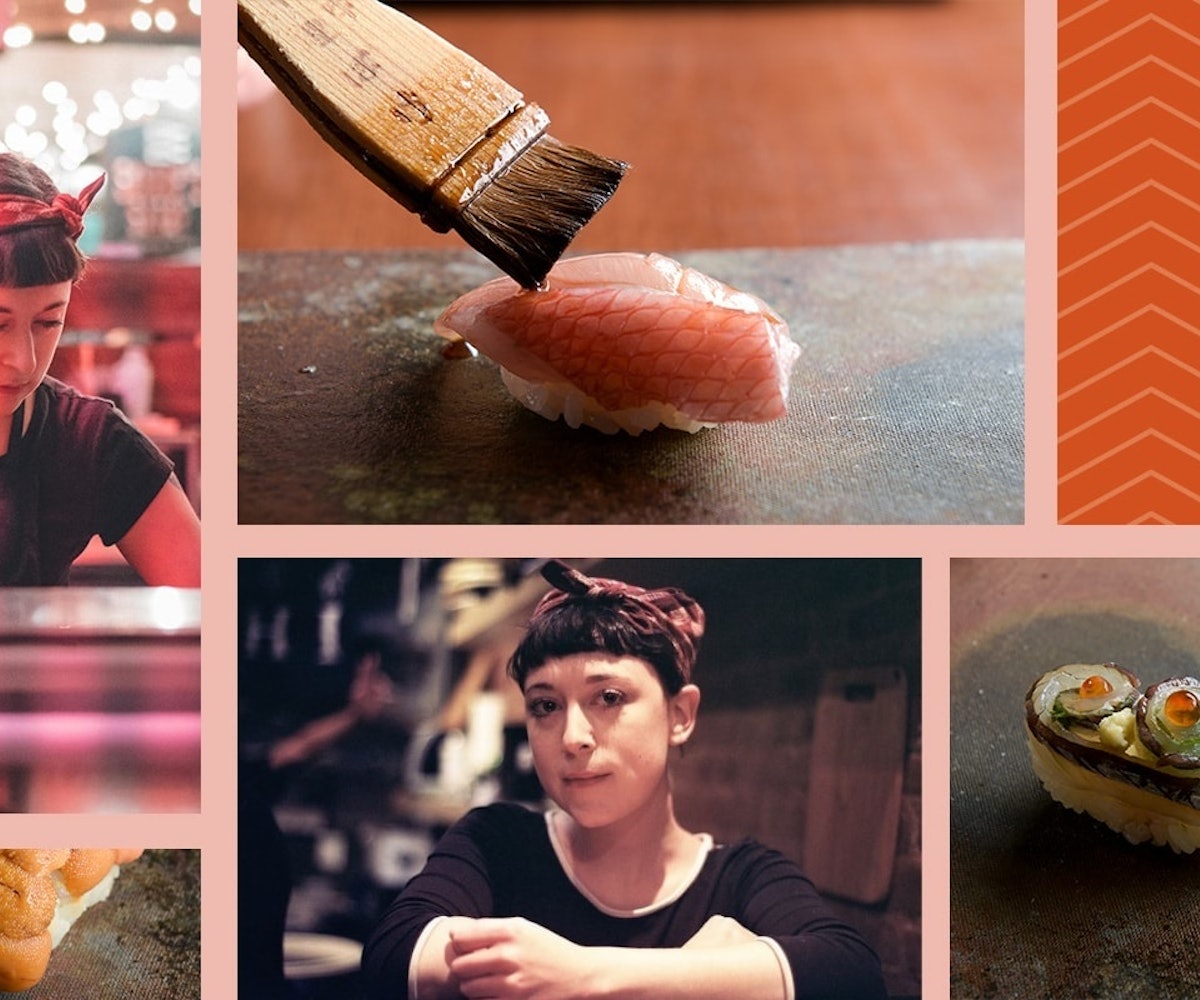 One thing that you'll quickly notice about chef Oona Tempest is that she uses art analogies when talking about making sushi. While this might seem odd, it's not when you consider her whole cooking ethos: "showcasing food from an artistic standpoint rather than just a culinary." It's also not so strange when you take into account her background.

One of the few female sushi chefs in New York City, Tempest, who is now 26, moved from Massachusetts to New York at the age of 17 to study visual, critical, and multidisciplinary arts at the School of Visual Arts. She discovered her love for making sushi by chance—while covering a waitressing shift at Tanoshi Sushi headed by the late and highly respected chef, Toshio Oguma. By her final year of college, she wanted to be behind the counter. "I saw it as sort of the bridge between being an artist and also having a stable profession, which is not easy when you're in the arts," she says. "I really fell in love with it and begged earnestly to apprentice and, after a lot of persistence, Oguma finally said, 'Okay, you can show up. If you can survive, then you can stay.'"

She wasn't only going to survive, she decided, she was going to excel at the "intensive" training required to become a sushi chef. "In the beginning, I definitely went out and bought every single book on sushi that was available in English—which wasn't a lot in 2014 but I found them all—and scoured the internet," she says. "Every single day, I would wake up and be like, 'What can I learn, so that I can go into work and be a little bit better than I was before?' because every single day you had to be better than you were before."

If that feels like a very academic approach to food, Tempest—who apprenticed with Oguma for several years, before leaving for Sushi Ginza Onodera and Shoji at 69 Leonard Streetand now landing at Sushi by Bae—won't deny it. "The shift felt very natural because when you have the art school studio classes, they are very intensive—they're six-hour classes minimum," she says. "When you transfer it over into the world of being a sushi chef, it's actually not that different. When you're working at the sushi bar, especially during service hours, it's about six hours, you're in creative mode the whole time. If you're in a sculpture class for six hours, it's kind of the same thing." It's fitting that she brings up sculpture—not only does the word nigiri (sushi) mean "squeeze by hand," but, as you watch her scoop and lovingly shape the rice for the fish with her hands, you can't help but think of Tempest as a sculptor of sorts.

"I think a lot of chefs are also artists. Cooking with or without fire is a process of creation, so it naturally has a very creative aspect to it," she says. "When I make a piece of sushi, there's a lot I'm thinking about in that short period of time. The first is shape. Your initial knifework on the neta [sliced fish] will determine the ultimate visuality, like making a blueprint." She notes that like with art though, over time, that blueprint might change as a dish is refined or simplified. "You paint something, you don't like it, you scrap it, you paint over it, and only because you still see that faint outline in the background of what you first did, you can see, 'Oh, well I'm going to do it differently this way.'" This plays into her current menu, as it deliberately changes seasonally, but also accidentally when she sometimes has to change the menu last-minute because a delivery she requested can't be fulfilled at the market in Japan, from which she gets fish flown three times a week.

In a more interesting twist, she also compares making sushi to processing prints in a photography dark room. "It all comes down to seconds of time. You leave a print in the chemical for two-seconds too long, it's ruined, and it's the same way when you're marinating fish. It's a weirdly similar kind of skill set," she says. Time is something she encourages her diners to think about too, prompting them to abandon manners and eat each piece of sushi as soon as it lands on their plate, and not to wait for anyone else. While watching Tempest making the sushi, she doesn't seem rushed, but rather incredibly focused. "You can't be too slow but have to be very precise—so you need to get the right balance of rice, and then a correct shape, all with very delicate touches as to not compress the rice too much. It should have air between the grains, so it feels soft when eaten."

In addition to making the sushi, she pickles, cures, and marinates her own garnishes, like ginger that tastes as fresh as spring wildflowers, and she freshly grates wasabi root (which tastes a lot more fragrant yet milder than the paste), and makes her own condiments. "That is where a lot of the magic of the meal comes from. I don't like to use store-bought, ready-made products. It feels like it defeats the purpose if I were to do that. You come to eat at a restaurant to have that chef's food—not something from a bottle," she says. She notes that most sushi chefs will make their own soy sauce. "Depending on the chef's style, they mellow it down with sake and mirin [a sweet cooking sake], sometimes kelp, sometimes katsuobushi [dried bonito shavings], sometimes other things—and steep it like a tea. That's what's being brushed over your sushi. So many flavor complexities come out in that process, and, as a chef, you then have control over the strength of the flavor, salinity, etc."

Those are the sort of things that she hopes to educate diners about, and she will have the opportunity to, as she prepares the food in front of them, on the other side of the six-seat counter. But also, she wants to learn more about their tastes and preferences, noting that the NYC diner's palates have changed recently. "A few years ago, hamachi, tuna, and salmon were the most common or well-known pieces. But now everyone is much more familiar with Japanese fish, like golden eye snapper, silver fishes like mackerel and sardines, and even fish like Shima Aji [striped jack] or Kawahagi [Japanese trigger fish]," she says. And while she does serve bluefin tuna—in fact, three versions of it, ranging from lean to fatty—she is a lot more excited to talk about the melt-in-your-mouth tender Sakura Masu (cherry trout) and needlefish that you want to drape over your finger like a ring, because of its beautiful off-white-silver shade. "I love playing with new kinds of fish, so the shift in demand has definitely allowed for chefs to have more creative freedom."

This extends to other elements as well. For example, when the restaurant first opened during cherry blossom season, Tempest's opening dish consisted of Ishidai, a Japanese knifejaw, wrapped overnight with salted cherry blossom leaves to infuse the flavor and aroma. It was then topped with Irizake, "clear soy sauce" made from salted plums, sake, salt, and kombu (seaweed), and a pinch of plum salt, made from Wakayama salt crystals and plum vinegar. "It's important to me for the opening dish to have a lot of elements that work and play well with each other. They all need to harmonize to give the kind of presentation and feeling I want that first bite of the night to have." Similarly, the meal always ends on something memorable like a buttery bowl of rice topped with quail egg yolk, soy sauce, sake, and yuzu and surrounded by salmon roe.

With three 90-minute seatings a night, Tempest has been able to price the omakase at $110, which is much more affordable than other comparable omakase tastings in NYC. Though, she is quick to recognize (probably because, not so long, she herself was a student on a scholarship who was waitressing to make money) that, even for 15 courses made of fresh fish flown from Japan, it's still not by any means "cheap." But, she says, while "for me, personally, that's not a bargain meal, I really want to make you feel like you spent a lot more than $100 for the experience." With this in mind, she will never compromise on the quality of the ingredients while continuing to make it her mission to come up with other ways to create a high-end omakase at a reasonable price and "do the most" within the time constraints of 90 minutes.

She is no stranger to challenges. As a young, white, female sushi chef, she's had her share of doubts cast on her. "I was definitely doubted a lot in the beginning. I started when I was 20 in the restaurant. There were a lot of jokes. No one really thought I was going to stick around," she says. "I've overcome doubts just by being determined. When I get really passionate about something, I become a bit blind to opinions around me." She credits her mother, who became a single parent after Tempest's father passed away from cancer, for this mode of thinking: "She's so strong and overcame so many obstacles and really gave me an example that you can do what you set your mind to."

Her mentor Oguma, who was Japanese, also encouraged her to pursue her culinary studies. "He had trained all sorts of people of every race and gender in the past over his time in New York City," she says, adding that he didn't care where his students were from as long as they showed respect for his methods and recipes, secrets that she is honored he trusted her with before passing away from cancer last year. "I hold them very close to my heart. Those are really important. They're passed down from his mentor in Japan, so I'm holding onto something that's very old. I wouldn't give it away freely." It's the same memory of him pushing her that encourages her to continue to pursue what she loves doing, regardless what some may have to say: "Oguma brought me up to the counter right away. It's been my spot. I love it, I love it, I'll fight for it. I'll do everything I can to stay there," she says. "I can't change my age, I can't change my gender. It's just going to be me doing my thing, and that's it. It doesn't matter if someone thinks you're adequate or not. You live with yourself every day, more than anyone else, so it's important to have a good relationship with you."

And though Tempest "follows Oguma's style as closely as I can" and is very serious about preserving Japan's traditions, particularly the Edo-era techniques, she's also refreshingly not sensitive about how her food is perceived by others. "I'm still young, I'm not going for a Michelin star... I'm just really trying to work on getting my craft, my art, to a place that I think it can reach, to a place that I want to see it get to. And that can only come with time," she says. "Not everything has to be perfect right now. It can get there."

NEXT UP
Life
Alison Roman Is Getting Her Own Cooking Show
Life
A Studio Ghibli-Inspired Cookbook Is Coming To A Kitchen Near You
Life
On The List (With Melissa Rich): The Highs & Lows Of Solo Partying
Life
All About The Age Of Aquarius