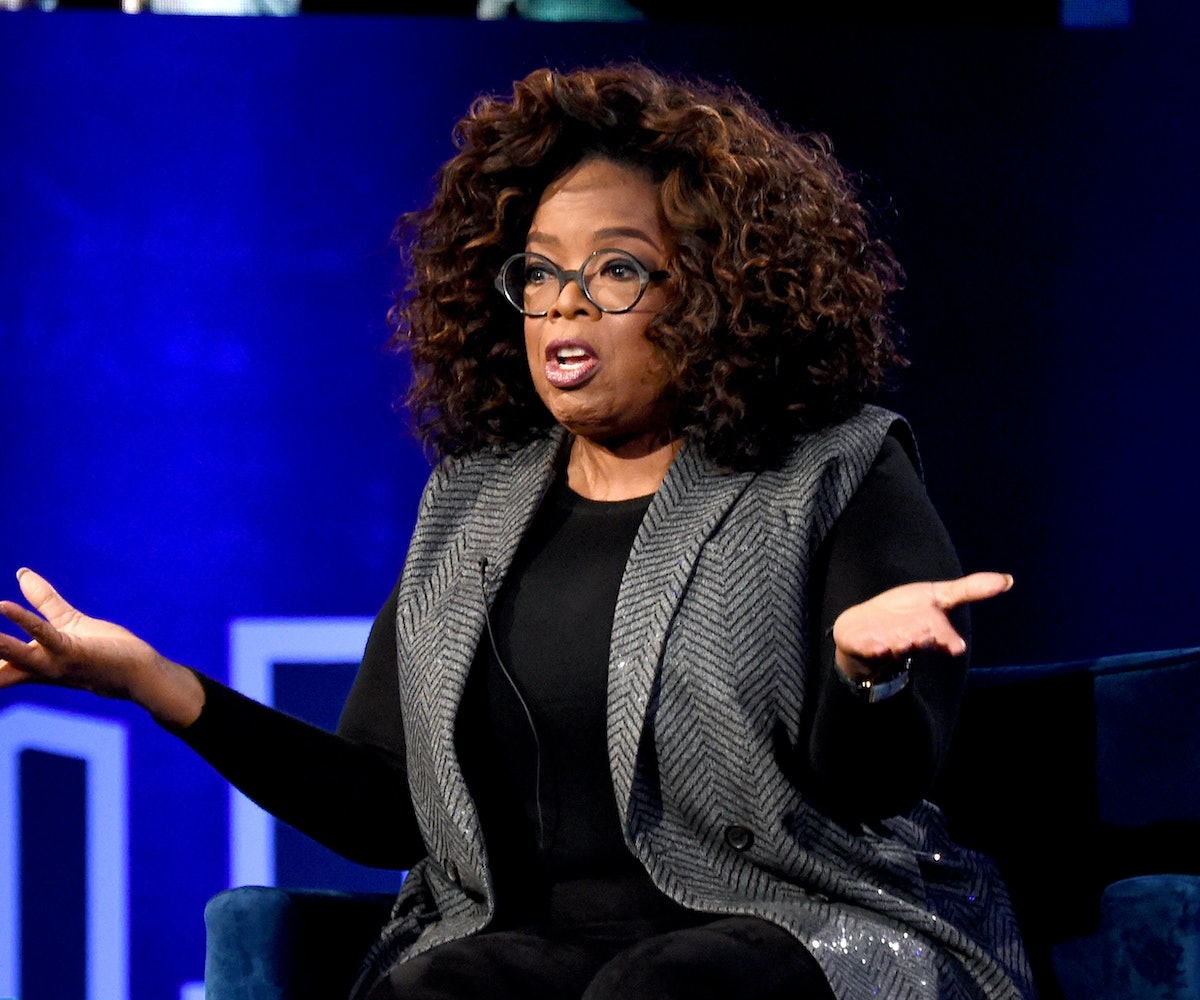 Last week it was announced that Oprah was entering the conversation about Michael Jackson and his alleged history of sexually abusing minors, made newly topical by the HBO documentary, Leaving Neverland. The accusations against the late King of Pop are serious, and they have long been treated as a big, messy open secret. It's become such a lurid spectacle, that I wouldn't have blamed the Queen of All Media for avoiding the topic altogether.

But at the beginning of her recent special, Oprah Winfrey Presents: After Neverland, Oprah shared a statistic that made it clear why she's willing to venture into such sensational territory: "In 25 years of The Oprah Show, I taped 217 episodes on sexual abuse. I tried and tried and tried to get the message across to people that sexual abuse was not just abuse. It was also sexual seduction." Rather than comment on the suggested sins of Jackson, Oprah is invested in something way more important: getting people to understand different types of sexual abuse and abusers, so that we're better equipped to recognize it and help prevent it.

Currently, the anti-sexual assault movement is working hand-in-hand with cancel culture. When someone famous is accused of sexual abuse, we want their music taken off streaming services, their movies out of theaters, their names snatched from the end credits. We want to punish them with erasure, as if, somehow, their crimes will dissolve along with our memories. This type of action also stops men like R. Kelly or Bill Cosby or Ryan Adams from generating the income that can be used to aid in their abuse or protect themselves when people try to hold them accountable. (Canceling someone like Jackson, who has been dead for nearly 10 years, might not have a financial effect on him, but it would on his family, who have protested the release of Leaving Neverland and maintain Jackson's innocence of any wrongdoing.)

However, while divesting money, time, and attention from predators is a simple action that makes us all feel less helpless in combating abuse, what does it really do? After perpetrators have gone "away"—out of the limelight and out of our favorable public consciousness—what have we done to highlight the predatory behaviors of grooming, seduction, and brainwashing? What have we done to shift the narrative of victimhood that we expect from people who come forward with experiences of abuse? These are the hard questions Oprah sought to answer on After Neverland.

The omnipotence of Jackson's fame was, in and of itself, part of the grooming process that made his alleged victims less likely to reveal his secrets, speak out against him, or be believed if they did. Wade Robson and Jimmy Safechuck, the men at the center of Leaving Neverland, sat with Oprah and described the relationships with Jackson that began when they were 7 and 10, respectively. Both men said that Jackson made them feel loved, important, and special. They trusted him because of the soft, gentle persona he projected to the world. Jackson also won the trust of their families so that he could have access to the boys whenever he wanted, sometimes for extended periods of time—time which was often spent in Jackson's bed. Both Robson and Safechuck interpreted the sexual molestation that they experienced as expressions of love and affection from the man who had become the most important person in their lives. The indebtedness they felt for Jackson followed them into their teen and adult years. When the superstar was on trial for child abuse in 1993 and 2005, both Robson and Safechuck, along with their families, publicly denied that Jackson had ever engaged in inappropriate behavior with them.

While it might be easy to dismiss this situation as being singular, because of Jackson's incomparably huge level of fame and power, what Robson and Safechuck describe is not unique. Virtually no other abusers have the level of fame or fortune that Jackson had when these alleged crimes were committed, but the power dynamic between adults and children is so inherently unequal that it still lends itself to the same kind of manipulation. People can leverage good reputations and other good deeds as evidence that they haven't hurt anyone, a position that Jackson's estate has taken on the allegations put forth in Leaving Neverland. But the close proximity of abusers to their victims also make it easier for them to conceal what they're doing. When your abuser is someone you love, trust, admire, respect, or depend on, it is difficult to identify their behavior as harmful. It can be impossible to reach out for help. Studies have shown that victims can disassociate from their memories of sexual abuse, only to have them appear more clearly later in life, because they've reached a level of maturity and understanding to sort through the difficult, confusing emotions.

This is why it wasn't until the Robson and Safechuck were adults, with children of their own, that they were able to identify their relationships and sexual activities with Jackson as abuse. For naysayers, this was evidence that they were liars, rather than just being victims of effective brainwashing. Oprah pointed this out immediately: "When you are a child… you don't have the language to explain what is happening to you because you've been seduced and entrapped." She also made clear that once a child has committed to holding such a secret it makes their entire childhood "a lie" as a result. As badly as we all want for trauma, and reactions to it, to happen as a sequence of linear events—something bad happens, we know it's bad, we report it to someone who can help, they also recognize the bad thing, and do something about—that simply is not the case. Until we recognize red flags (like a grown man who enjoys spending alone time with children in his bed, and who isolates young people from their family and friends) and learn to accept that abuse takes on many forms, we'll continue to isolate and alienate victims.

Sexual abuse is pervasive; this is why Oprah spent 217 episodes trying to give the rest of the world an outlet to process it. "This moment transcends Michael Jackson," she declared. "It is much bigger than any one person. This is a moment in time that allows us to see this societal corruption. It's like a scourge on humanity."