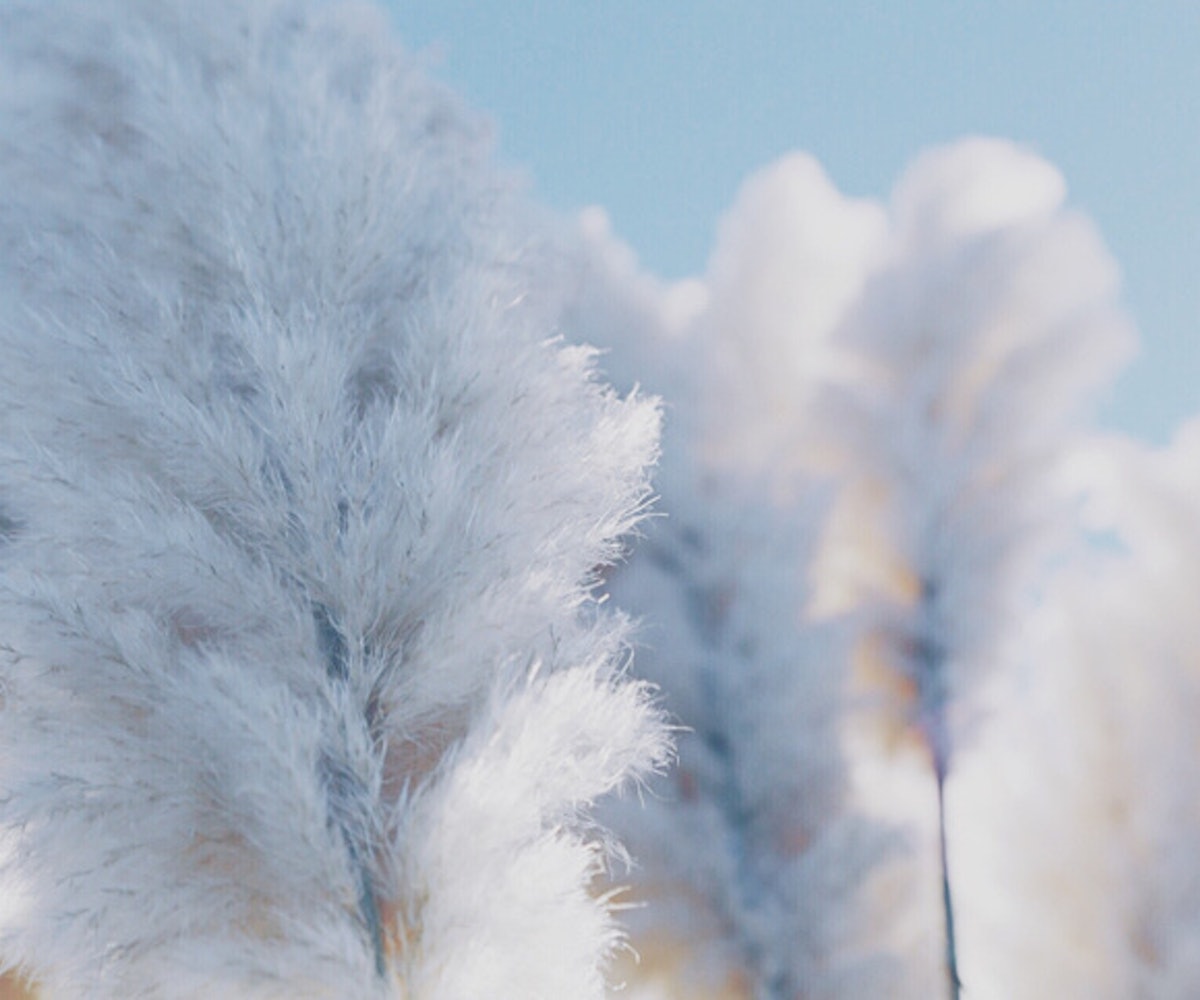 I guess I had been seeing pampas grass for a little while before I really noticed it; but, once I noticed it, I started seeing it everywhere. It began a few weeks ago when I happened upon images of Mandy Moore's wedding on my Instagram Explore page. There she was, in her backyard, framed by feathery pink and white explosions, like mini Truffula trees, all standing at attention.

Then, I saw a woman walking down Broadway with an armful of the wispy stalks. She was the kind of woman who would've been laden down with anthuriums a few months ago; she wore the clogs I've long been coveting and a teddy bear coat, and she just looked altogether perfect—particularly with that bundle of pampas grass.

This was already Baader-Meinhof Phenomenon-y enough (a situation where one keeps seeing the same seemingly random thing over and over again, aka "frequency illusion"), to the point where I wrote down in a notebook, "Pampas grass now everywhere, but why." Then, finally, I saw an article in The Cut, titled, "Pampas Grass Is the New Monstera Leaf," and I knew that pampas grass' moment was here.

As writer Margaret Rhodes discusses in The Cut, one reason could be rooted in environmental causes. She writes: "The ubiquity of the poofy grass might... speak to another shift: that increasingly urgent desire to use less and reuse what we have." Pampas grasses are environmentally sound, in that they don't require floral foam, and then, too, they're consumer friendly, because you can buy a bundle and it will last forever—no need to replace them as you would fresh flowers.

Still, though, I felt like there must be some other allure to the feathery plumes. It's really starting to gain in Instagram popularity (though, it's only been hashtagged ~31k times compared to anthurium's ~117k and monstera's ~555k), but I think that trend can only continue what with Moore's wedding inspo, as well as the fact that it has its own distinct emoji.

So I turned to Google to see what else I could discover about pampas grass and was both surprised and delighted to find out the secret history of pampas grass, namely, that it's a symbol of swingers, and its placement in a front yard has been used to indicate when the residents of a home are open to a little polyamorous action.

According to an article in Southern Living, titled "Pampas Grass Is For Swingers," the plant—about which Southern Living is very disdainful, citing its presence in a front yard to be nothing less than "tacky"—is used to attract swingers. SL cites the caption on a photo of pampas grass that they used as saying, "It is a well established fact... that if you have pampas grass in your garden you're going to attract swingers (swingers use the grass as an advert to other swingers). Has anyone got pampas grass in their garden and ....had anyone knocking on their door asking to swing?"

And other news outlets, from The Guardian to The Irish Times, have also explored the topic, although without offering any conclusive results as to whether or not the presence of pampas grass in the front yard or in your Instagram grid will lead to couples reaching out to you to see if you want to hang.

So what does this all mean? Possibly—probably—nothing! Just like it doesn't automatically mean that people who are buying pampas grass are doing so for sustainability reasons (they could just really be inspired by Moore), it doesn't necessarily mean that people who are now into pampas grass are secretly signaling that they're done with monogamy. It could just mean that they are hungry for human connection, that this overly stylized and sterilized world, in which every single thing we do begs to be documented and dispersed into the world for the approval of others, has made us isolated and unsure of how to meet the people living right next door to us.

And so we put a pampas grass bouquet on our bedside table, not in the hopes of hooking up with whatever random people know that it's a symbol for swingers, but in the hopes that someone else will see this Seuss-ian still life, and ask us where we got it, let us know they like it, and that maybe they like us too—not necessarily in a swinging way, but also maybe? Life's short, and the planet is dying. Might as well put some pampas grass in your feed, right?