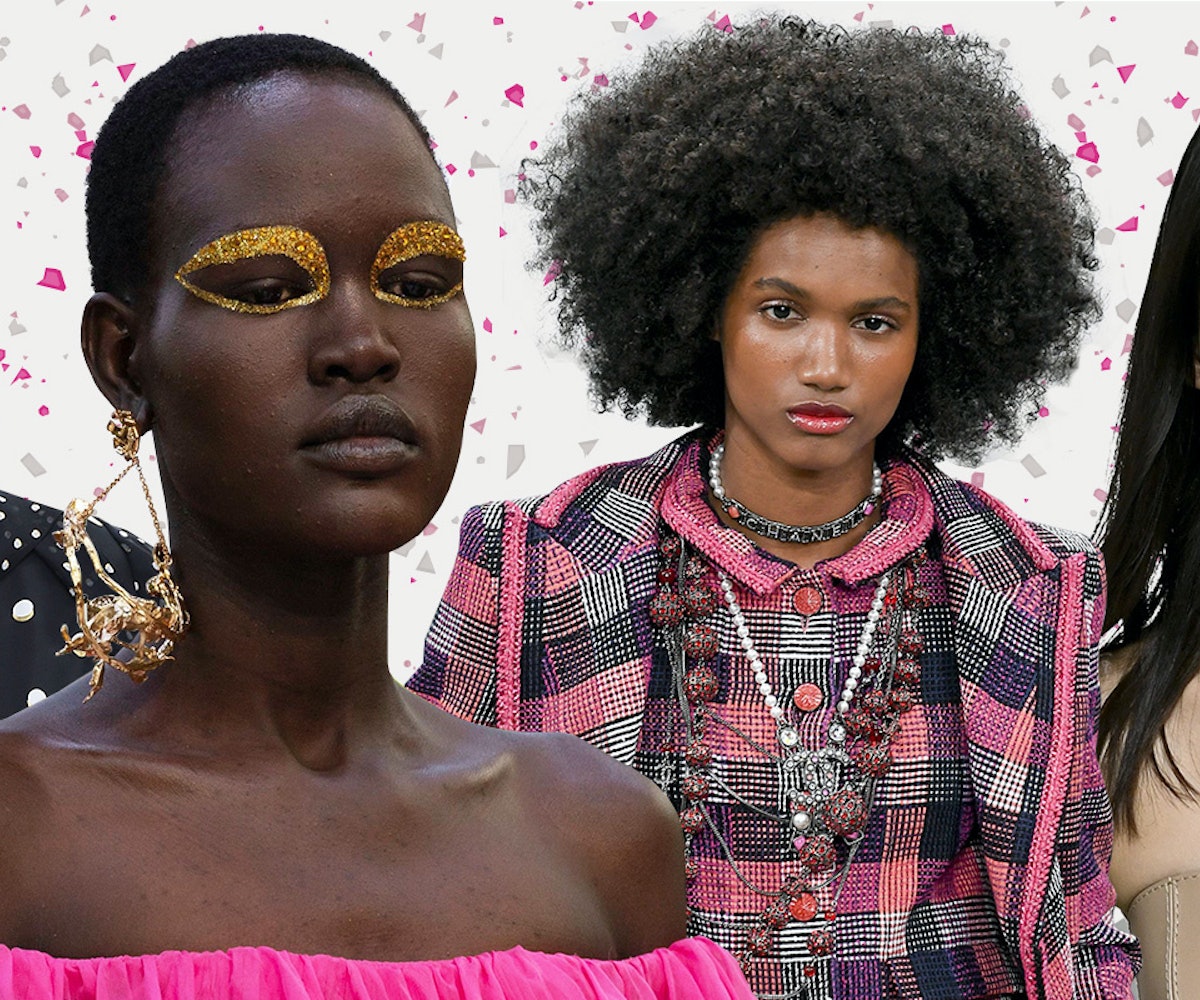 French beauty secrets have long been the fascination of editors and enthusiasts alike. Whether it's sussing out the classic French-girl red lipstick or copying a makeup application technique, there's an obsession with the easy elegance that we just can't shake. And then there's Paris Fashion Week, where the imagination runs wild.

It's really no surprise that the city's fashion week features some of the season's most-anticipated and copied runways. While the clothes are a big topic of discussion, the beauty is of note, too. Pat McGrath always sets the tone with her over-the-top, internet-breaking looks (hello, Valentino), while others forecast the wearable beauty looks to come.

Below, we've rounded up the six trends we saw over and over during the Spring 2020 shows in Paris, which we encourage you to imitate at home.

There were voluminous curls at Chanel, wash-and-gos at Louis Vuitton, and '70s-era 'fros at Celine. Natural hair was out in full force on Paris runways — moisturized and melanated — and it was refreshing to see. Amid discussion around inclusion in the industry, there's some evidence that the runways are becoming more diverse, which is a step in the right direction.

From left: Celine and Chanel

Pat McGrath is known for turning the beauty looks into a moment, and the Valentino show was no different. Models went down the runway in various levels of golden glam — ranging from a wearable bronze smokey eye to a connected glitter wing and a strong brow.

Classic Cornrows Are Back

Almost every major runway featured cornrows, and we believe it's a case of art mimicking real life. Cornrows have popped up on red carpets, on Instagram, and IRL as of late, and we're here for it. The braids we saw at Sacai, Hermés and Giambattista Valli were the simplest iteration of the age-old style — braided straight back in uniform lines — a classic and timeless take.

From left: Hermés and Sacai

French Beauty Is Timeless (and Monochrome)

Lots of designers sent models down the runway basically barefaced, their skin impossibly glowy. It felt like French beauty come to life, maybe even a little more carefree. There was minimal makeup all around, with an emphasis on skin that looks like skin. We hear the message loud and clear. When there was color, it was all one note — and we mean that in the best way. There were various shades of brown at Lanvin and Alexander McQueen, hints of orange at Nanushka, and washes of red at Chanel.

From left: Lanvin and Paco Rabanne

It's the year 2019, but the runways say differently. There were bowl cuts, shag cuts, afros, and bouffants abound this season styled in classic '70s shapes. It felt nostalgic but updated, with many designers emulating the look with a twist. The secretary-like coifs at Miu Miu had a little extra volume — like a typist post an eight-hour shift — and the middle parts at Louis Vuitton were shiny and slick. The most true-to-era offering came from Celine, where some models looked like they stepped off the set of The Deuce, their hair mussed and cascading in effortless waves.

From left: Lacoste and Miu Miu

Baby Bangs Are Back

Every time bangs come back around (do they ever really go away?), they show up a little different. These days, baby bangs — also called micro-fringe — are all the rage, stopping mid-forehead and making the wearer look ultra-chic. We spotted the cropped look at Liu Chao, Lacoste, Junya Watanabe, and Givenchy.

From left: Givenchy and Lacoste