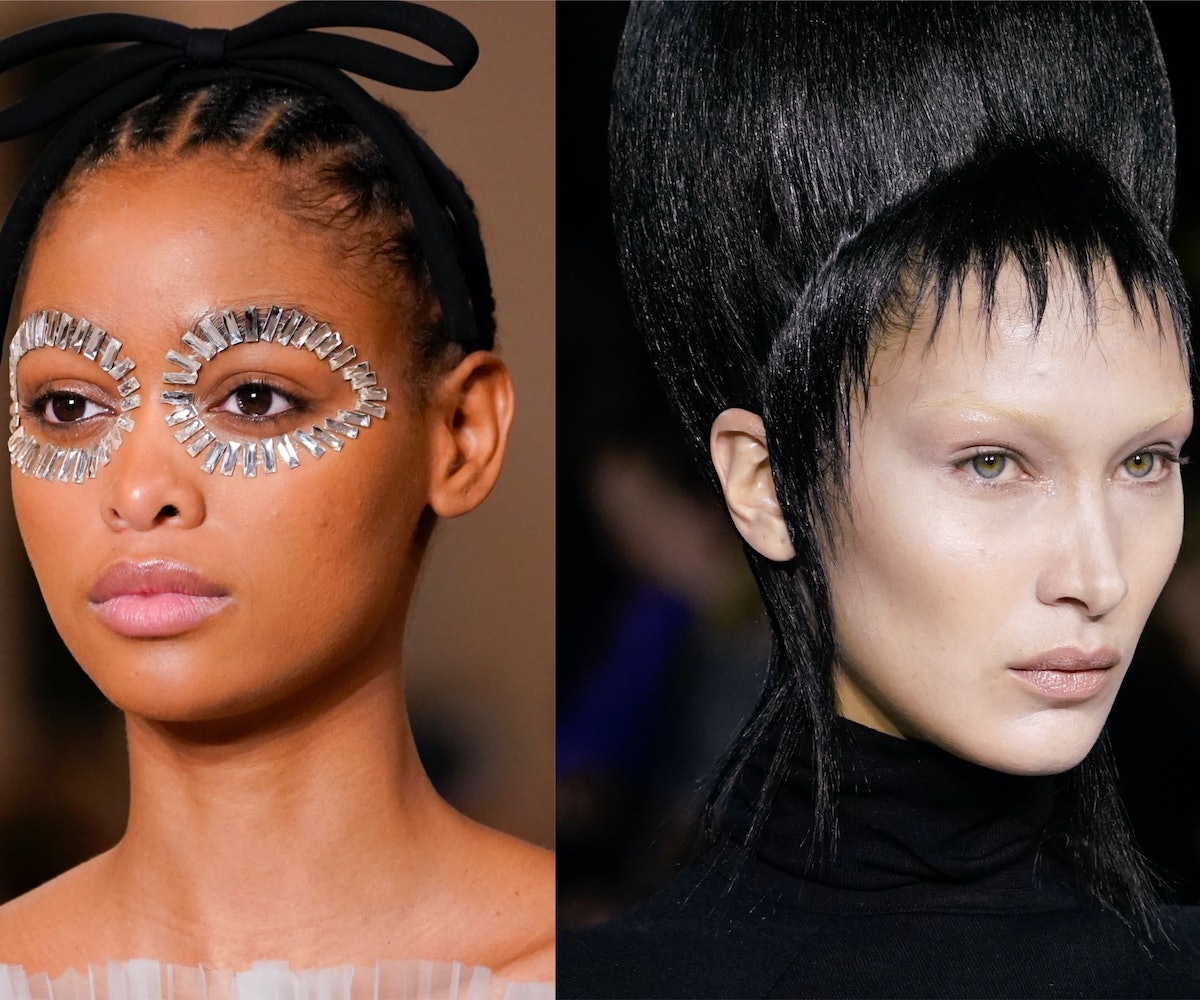 Twice a year, Paris hosts the the grand finale of fashion month, and twice a year, the city doesn't disappoint. That sentiment rang extremely true for the Fall 2020 season, where even the Paris Fashion Week beauty held its own — amongst the whimsical gowns and surprise celebrity appearances on and off the runway — with a more-is-more approach to quite literally everything.

The city offered maximalist takes on hair and makeup across the board; some perfect for a big night out, while others leaned all the way into Halloween costume idea inspiration. The latter was evident at Haider Ackermann, which saw models including Bella Hadid with bleached brows, pale skin, and sculptural bouffants, rendering them nearly unrecognizable. At Dries Van Noten, models took the runway with dyed roots, making an unofficial nod to the slimy green style of Billie Eilish; and at Giambattista Valli, crystals framed model's eyes like goggles.

On more wearable territory, runways were flooded with heavy, kohled eyeliner looks at Dior and Celine, expressive two-toned eyeshadow looks at Altuzarra and Maison Margiela, and hair of decades past at Chloé and Chanel that took your typical tousled, bouncy waves and slicked-back bobs to the next level.

Whether you're interested in trying them out for yourself, or saving as your phone background to admire as art from legendary beauty pros Pat McGrath and Duffy, check out the most memorable beauty moments from Paris Fashion Week Fall 2020, below.

The ultra-feminine Giambattista Valli show featured makeup by MAC for a fresh, matte face and your-lips-but-better shade on the mouth — a simple approach to balance out the shiny, rectangle crystals placed around various models eyes. Headbands, veils, and delicate bows were tied like shoe strings atop braided-back styles, loose chignons, and blunt bobs.

If the Addams Family took place in space, its characters would look similar to the models on Haider Ackermann's Fall 2020 runway. Showing off Bella Hadid in a way we've yet to see her, the show featured bleached brows to draw attention to the model's sharp features and facial curves. The hair was equally intense, with a next-level, sculptural bouffant crafted by Duffy, complete with sparse, zig-zag fringe.

At Dries Van Noten, hair legend Sam McKnight sent models down the catwalk with a variety of neon-colored roots, inspired by images of Serge Lutens in the '70s — but the similarity to pop star Billie Eilish's slimy green roots was hard to ignore. For makeup, artist Inge Grognard took the same Lutens inspiration and created a watercolor, two-toned shadow look on the eyes.

Waves of Black at Yohji Yamamoto

The beauty looks held their own at Yohji Yamamoto, with a pale complexion, and black pigment haphazardly drawn onto the face. Lead makeup artist Pat McGrath also created a shadow on the lips, using both gray and black color. As for the hair, stylist Eugene Souleiman applied wet- and dry-textured, black hair pieces that were laid as if they were falling off of the model's heads.

While the makeup at Chloé was decidedly pared back, the hair looked at styles of decades past, including these finger waves on Kaia Gerber. Crafted by Redken Global Creative Director Guido Palau, the looks relied heavily on hairspray for a sculptural hold.

Heavy kohl liner was the way at Dior — and not just one, but two. For the show, Creative and Image Director of Christian Dior Makeup Peter Philips created three looks focused on the edgy eye: one totally framed, all the way around liner; a harsh under-eye look; and one focused around the edges "for a droopy look." Backstage, Phillips shared with NYLON his formula mix. "I used a [liquid] eyeliner because it's easier to draw, but I didn't do a full kohl because by the time the show starts, it will all be gone," he said. Instead, to make the kohl smudginess, I used a waterproof pencil on the edges so that there is some movement, but not uncontrollable. There's a rawness to it."

Another Pat McGrath offering, the look at Maison Margiela moved the bold eyeshadow a lot higher than you may be used to, completely covering and shaping the eyebrow. McGrath layered up to the brow-bone using bold, contrasting hues — like punchy oranges and lilacs — on some models while others wore bleached brows and graphic lines on an otherwise bare face. The hair was just as captivating, slicked back to frame the face, with direction by hairstylist Eugene Souleiman.

Dreamt up by none other than Pat McGrath, models at Valentino wore clean faces with a focus on the eyes. McGrath used the Pat McGrath Labs Perma Precision Liquid Eyeliner ($32) to line the upper lash lid, then swooping them out to connect with the bottom lines. The look was topped off with teeny black crystals.