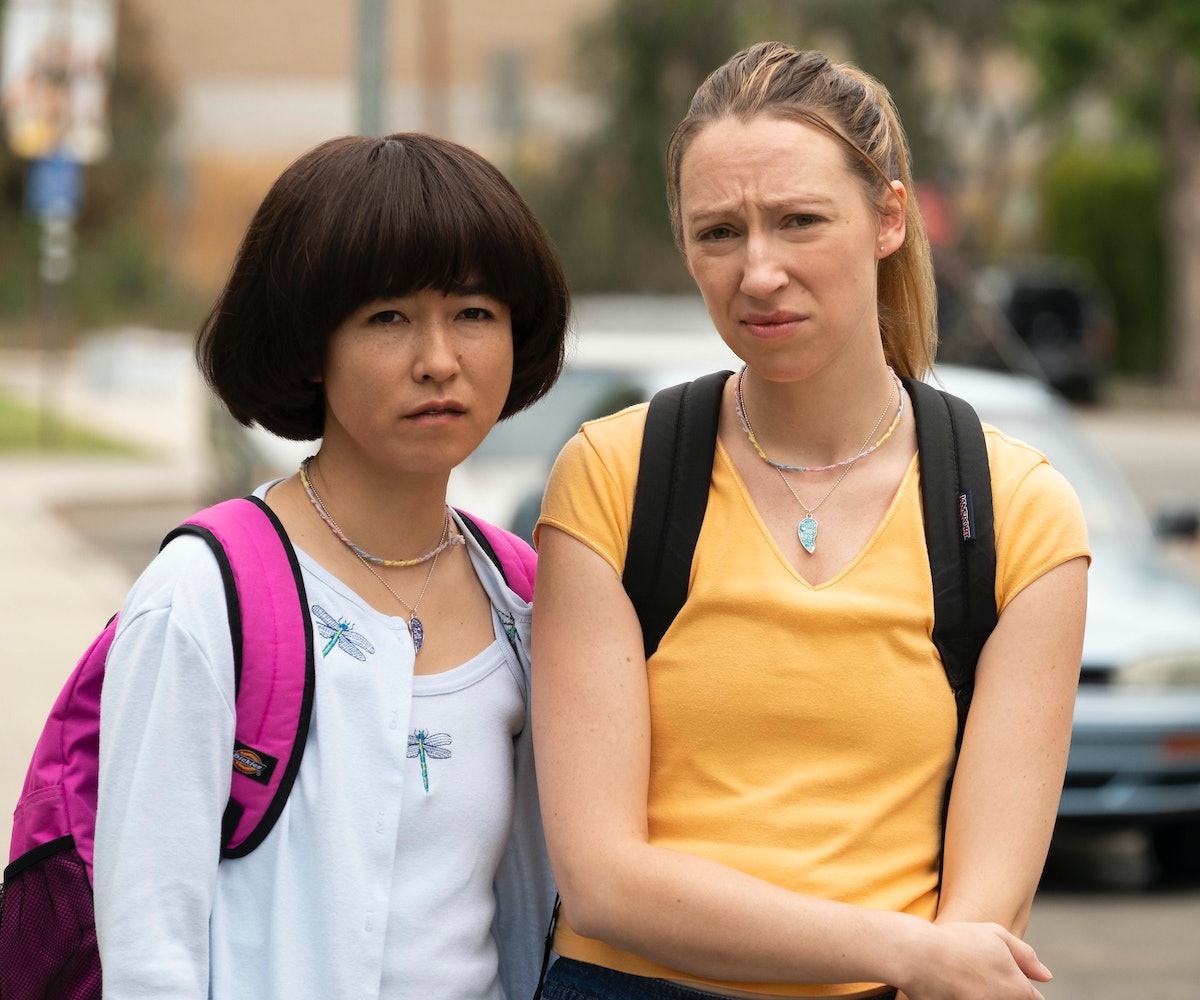 "My favorite thing, I think, is the tall girl arm thing," my coworker, Dani, told me over Gchat, referencing the way that PEN15's Anna Konkle holds her forearm self-consciously across her stomach, slumping into herself, in a stance recognized by tall girls everywhere, but perfected by Konkle's character, Anna Kone.

"I think my favorite thing," I replied, "was how stiff that thong got when Maya washed it with hand soap." Just typing those words made me laugh quietly to myself, thinking about how Maya Erskine, who plays Maya Ishii-Peters on the show, shut herself up in her bathroom, yelling at her mother that she'd be washing her hands for a very long time, and then furiously set to work trying to make clean a very dirty, very pink, very stolen thong.

But, the truth is, it's hard to single out favorite things about PEN15, the Hulu show created by Erskine, Konkle, and Sam Zvibleman, because each of the show's 10 episodes is loaded with moments of cringe-inducing glory, all designed to transport the viewer back into a world of first kisses, braces-featuring smiles, and the kind of extremely low-rise pants that we're horrified are going to make a comeback.

The premise of PEN15 is as simple as it is perverse: It follows the lives of best friends Maya and Anna as they make their way—awkwardly, naturally—through 7th grade in the year 2000; but rather than have 13-year-olds portray Maya and Anna, Erskine and Konkle play the roles themselves, in all their 31-year-old glory. Meanwhile, the roles of their fellow middle schoolers—from mean girls to cool guys and everything in-between—are played by actual teenagers, turning the awkward factor up to yet another level.

And yet, perhaps what's most surprising about the show is remembering not how far we've come, as adults, from our pimply, greasy-haired selves, but how informed our lives still are by who we were back then; even in our 30s, the 13-year-old version of ourselves is still omnipresent. This makes a certain kind of sense, of course, our middle school years are formative in just about every possible way; this is the time in our lives when we define who we want to be on our own terms. It's when we make mistakes. It's when we become conscious—and self-conscious—of how other people view us, and of how we view ourselves. It's when we understand that we wield power over other people; we have the ability to hurt them, to love them, to change their lives in the same way they change ours. It's a lot of responsibility for anyone of any age, but certainly adds an incalculable burden to shoulders that are already weighed down by fully packed Jansport backpacks. But Erskine and Konkle handle this responsibility well, and aren't afraid to tackle the darker parts of becoming a person in the world—like dealing with racist peers or coping with your parents' divorce—all while balancing it with pitch-perfect humor, and lots of great '00s fashion references.

Recently, Erskine and Konkle stopped by the NYLON offices, and I talked with them about what makes 7th grade such a special time in our lives, how it was to wear braces and low-rise jeans again, and what about making the show proved cathartic for them.

What is it about 13-year-olds and that time in a woman's life—although I'm sure a man's too—that just never leaves you? It feels like it becomes who you are for the rest of your life in your own eyes for so many people.

Maya Erskine: I think it's because your brain is forming into who you become at that time. It's such a time of formative experiences and traumatic experiences, and they stay with you. I feel like any person I talk to, even if they've tried to stash away the memories of middle school, for some reason it's the most blaringly clear time of their lives. The memories just flood out when you ask someone about middle school, because it's such an extreme time of highs and lows, so I feel like they stick more.

Anna Konkle: I think there's a new way of processing things that we talked about a lot, that the same thing could be happening in your life in the 3rd grade, 2nd grade, 1st grade, the same conversations happening around you. There's a different kind of comprehension that's happening for the first time, but you don't have the tools [to process it] yet because it's new. You're comprehending things in a more varied, layered way, but without the proper tools. It's really sad and really funny because you're pretending and we always pretend, but then you're worse at it and your tools aren't as good.

ME: You're an adult and a baby at the same time. And it's this crazy dichotomy of being stuck in this morphing body of pain.

AK: It's the first semblance of adult emotions that will continue forever.

You changed yourselves pretty dramatically physically to embody these 13-year-old girls. Did just putting on those braces transport you to that time?

ME: We talk about this all the time: Making ourselves look like that feels more liberating than when we are trying to look pretty for a role. I feel more stifled in a way, acting-wise. Putting on the hair and braces and clothes, it does transform the way you hold yourself. We're wearing straps that strapped our boobs down, wearing low rider jeans that makes us, like, a sausage getting stuffed from both ends, painting on mustache hairs and eyebrows. I didn't have a bowl cut at that age, so I wasn't like, That's Maya, but it was this character that's how I feel inside. I also felt much more care and love and tenderness for my 13-year-old self by looking like that and celebrating it.

AK: I think I was physically uncomfortable being in those clothes and braces and strapping down, but it was also informative. You're naturally even more uncomfortable then, in my clothes and my body; it was much closer to the surface than I thought. It was a relief to slump over and cover my stomach because those things stay with you. That's what I wanna do right now, you know what I mean? I have to fight doing that. It was a relief.

Has playing these awkward versions of yourself changed how you feel about your regular selves? Are you more forgiving?

ME: Yeah, it's a constant reminder. I feel like I forget it easily, I can bring it into my daily life but I still have those same feelings of insecurity and questions, but it's getting easier.

AK: The way that I've grown up, I've been conditioned to wear makeup and look a certain way, that I'm happy when I look into the mirror. Playing characters where you really don't wear makeup felt so exhilarating, which was sad, but really freeing by the end. Even looking at myself as that character on screen, sometimes I'm like, Oh, you're really pretty. Like that, this way that I wouldn't want anyone to see. I would associate it with not [being pretty].

You met in college, at NYU, but you had different middle school experiences. What was it like to join together to create this sort of platonic ideal of middle school? How do you balance your own experiences to create something that has wound up feeling universal?

ME: We would all tell our stories [to each other to writes this]. There's a third creator from Missouri, our friend Sam, so it's three different places that we all grew up. We start the process by sharing stories, and whatever stories stuck out as ones that stuck out to us all to build an arc or story from, we would start there and be able to sometimes meld together our different experiences or use fiction to make that story work for both of us. Anna and I really put in our real friendship dynamic into the stories, so that informed a lot of how we wrote.

What things that you've experienced in real life and translated into the show have wound up being the most cathartic for you to work through, if any?

AK: The family stuff, for me, that was true to real life. I knew that it was going to be hard for my parents to watch, and I didn't know how they would react. There are things that they're good at seeing, and then there are things where they're like, "Well, that wasn't that bad, was it?" You know? So, seeing the show… that wasn't my intention at all, but I didn't know how they would be with it. There was a part of me that felt bad putting them through it again. I felt like it was important to share the minutiae of what that looked like and felt like, because a lot of the show were things that we kept secrets, even as adults. That was one of them. They both in different ways validated… I felt seen by them. They weren't angry at me, they were very much like, "I'm sorry that it was difficult, and thank you for making something positive out of it."

ME: Such an amazing reaction. That says so much about your parents.

AK: It was very healing for me for them to have that reaction, so it was really cool.

It's wild how much shame we all carry around from this specific period of our lives. Humor is an incredible way to work through that. Friends of mine in their 30s and 20s, they've told me how much they get out of something like Pen15, not just because of its humor but because it's a reminder that everything is normal.

AK: That's really cool. The idea of sharing secrets and holding that for so long, putting it out there and hearing someone say, "Oh, me too!" It releases the taboo. There's no darkness holding it down anymore.

ME: Even as adults, writing it, a lot of it, when someone would share something with the writers or whatever, some of it felt scary. A lot of it was like, Do we really want to do this? Now, we've done it and it's out and stuff so it's easy to forget. We feel that sometimes, but what made it easier was doing it together and not giving those things to other people to put them through and to do it ourselves. It was the perfect storm, to have the support of one another and do it together made it the perfect storm and time to do it. It's cool that other people are like, "Oh, me too," because we hoped it would be like that, but it wasn't something that we talked that much about.

How is it with your co-actors who are actual teenagers? Do they relate to the experiences that they're participating in? Or do they think their lives are wildly different now?

AK:I feel like it's hard for the kids to relate. When Maya and I talk sometimes about the expectation for the audience, would kids that age try to sneak the show? One thing we're finding is that maybe not. At that age, you want to try to fantasize about what's going to happen. It's very hard to see yourself clearly at that point.

ME: Yeah, you wanna watch 20-year-olds playing yourself like Nina Dobrev or something. The beautiful dream girl that's a popular girl in school, whereas watching us play versions of themselves, they're like, "That's not what I'm doing. That's not what I'm like."

PEN15 is streaming on Hulu now.