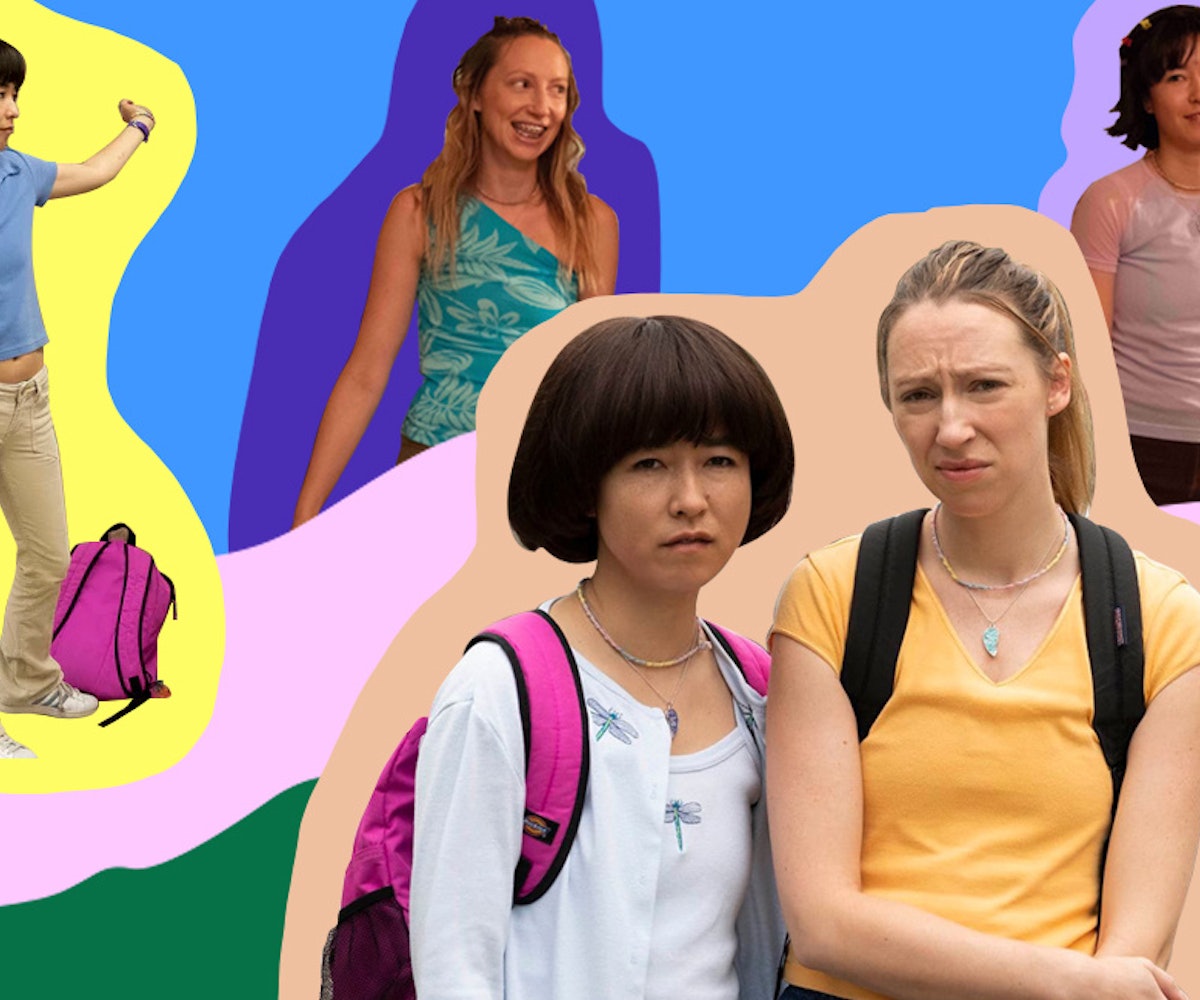 When costume designer Melissa Walker was first approached to work on the new Hulu series PEN15, createdby and starring Maya Erskine and Anna Konkle, she was all in. A story about two awkward adolescent girls, set during the days of AIM and Ask Jeeves? It's a millennial's nostalgic wet dream.

And, all Walker had to do to research the clothes of that era was access her own memories. "I pulled a bunch of inspiration from my middle school years," she told me. "It was lots of fun, but completely cringeworthy." She continued: "I went on eBay and bought like 20 different teen magazines and online catalogs [like Delia's] from that time. And while going through it all, I'm calling [Maya and Anna] up every other day, like, 'Guys I'm gonna vomit on my phone now. This is so bad.' It flooded back—nostalgia and embarrassment and everything that was actually scripted on the show."

This kind of stomach-churning reaction is part of what makes PEN15 so perfect. The different experiences that the girls go through on the show—discovering masturbation, middle-school bouts of racism, your first very tongue-filled kiss—are hard to watch because of how viscerally honest they are. And, maybe also because the secondhand embarrassment is still fairly visible in most millennials' rearview mirrors. Middle school is only a couple of decades away at most, which means the searing awkwardness of that time is still palpable. Like, sure you probably didn't steal a hot pink thong from the most popular girl in school as happens in PEN15, but you probably remember the first time you wore one and how you felt.

Another aspect of the show that makes it so relatable is the attention to detail. Everything from the soundtrack, which includes songs like "All My Life" by K-Ci & JoJo to the AOL dial-up sounds and, of course, the clothes (think: polo shirts, lace-up jeans, and khaki skirts) transport you right back to when you were constantly killing time in between classes by gossiping at your locker. "There's something about that time period that isn't popular again yet, because early-'90s is popular now and late-'90s is still just, like, disgusting to us," Walker says. "And that, mixed with the feelings from middle school, I think played really well on each other."

Ahead, we chat with Walker about dressing 30-somethings in adolescent clothing and whether or not we can expect a '00s comeback any time soon.

How did you get involved with the show?

I got brought in by the producer, Debbie Liebling, who I'd worked with on another pilot in New Orleans. It was a dramedy, it had the makings of, you know, a mix of comedy and heart-wrenching, painful moments, too. But that one didn't pick up, so she brought me on to PEN15. I looked at the script, and I was just absolutely in love with the concept of it.

The show is based off the stars', Maya and Anna, real lives. I know you said you pulled a lot from your own middle school days, did you pull a lot from old pictures of them as well?

Yeah, they brought in a bunch of their old pictures and got their parents to send them. We all had our parents involved in this. Anna reminds me so much of this girl who was a year older than me that's one of my really good friends, Gabby; and, Maya, I kind of based on Stephanie, [Maya's] best friend growing up.

Stephanie was always in little baby polos... she would always wear things that were a few stages too young for a seventh grader, like the Care Bear shirt, just a little more schlubby. So Anna's stuff was a little tighter, and Maya's stuff was always a bit more oversized, also to draw a distinction between different growth spurts, and just trying to fit in, but not quite hitting the mark.

Obviously, the clothes are hyper-specific, from the wash and style of the jeans to the platform sandals and even Maya's roll-y backpack. Did you source clothes from eBay also?

We did, yeah. A bunch of it was eBay, a bunch of it was costume houses. We needed multiple fun things. Like, when they did their Y2K gemstone shirts... we made those based on inspiration we found probably in Seventeen magazine. There was a lot generated besides just hunting and pecking.

But it was really fun. The fact that we were able to get so specific, like with the theater kid wearing a Cats T-shirt and the 311 kids and Shuhji [Maya's brother] was all about Wutang and Ruff Ryders. They let us do whatever the hell we wanted, and it was amazing.

I think that's what makes it feel very authentic, you could tell they were clothes actually from that time. Like, there were certain jeans I could tell were from Limited Too…

Oh yeah, we had a lot of L.e.i.s in there and some Mudd jeans—oh god, the zippers on those. They're so low-rise, it's like an inch long. It's like, yikes! And also, in high school, you have a job and can buy the clothes you want, but in middle school, you're at the mercy of your parents. You might want something trendy and in style, but if your mom doesn't buy it for you, then you're not getting it unless you're stealing it from a friend, like in the thong episode, or you're borrowing it.

Since Maya and Anna are 30-somethings playing middle-schoolers, was it hard to find clothes in their size?

It was, but it kind of worked, because, as we discussed, I used to wear things too tight because I didn't know my body, or I'd go through a growth spurt and wasn't willing to let go of my favorite jeans. I think our biggest difficulty was strapping down their breasts; that's what I noticed the most while watching, like, Damn it, there's gotta be a better way! We tried Ace bandages and that just took so long, and then we tried this big elastic breast piece that was about nine inches long, and then put spandex on top of that, but the girls are crying every episode, so I'm like, "I'm not trying to make you hyperventilate—strapping down your tits and making you unable to breathe!" So, there's always a bit of a line where it cinches at the armpits, but luckily everything else seems to not pull too much of the audience's eye away from what was happening.

The ham [from episode six], we had to make from scratch, because we wanted a glossier, slimier ham—that was a lot of fun, it took about three months to make, and I don't know that I've ever craved ham so much in my life.

All of the popular girls… I definitely based them off of the clique in my middle school and high school. I had them dress all in purple at the school dance and then they're all in pink camo for the fashion show, and they have the Tiffany's charm necklaces. It was definitely playing with a hodgepodge of things that defined their group.

Speaking of the dance, was it a conscious decision to have Anna and Maya not wear dresses?

I think it was more on their part—they wrote in [that they wore] pedal-pushers, Maya's only allowed to shave her legs to where pedal pushers reach, so we decided to put Anna in something similar to Maya. There is an unsexualized idea [here], they're not hip enough to know… this is why they're kinda always eggheads. They're always wearing browns and greens and khaki—colors that kind of bleed out—while the other girls have figured out color and sexuality and they're figuring out becoming women. Anna and Maya are left feeling left behind, because everyone develops at different stages.

Do you think that we're due for an early '00s comeback? There's already been the threat of low-rise jeans.

It usually is cyclical. I just read this book about the psychology of fashion. It goes from five years out of date, which is heinous, then it goes to retro, then antique. I feel that, especially with the internet, those time periods have tightened up a lot, but it is still cyclical. Even the way the '90s are being revisited, the style and the silhouettes and the colors come back, but it's being done in a modernized way, which is why I was glad I got to stay true to this and buy so much vintage, because once it is revamped and revisited, it's modernized. I do think there are certain things that we will see come back. God knows I'm hoping to just be able to keep wearing some things that work with my body and not for the trend. And I think a lot of growing older is working with your body and not just the trend. I just don't know how many I will personally be revisiting.

PEN15 is available to watch on Hulu.

NEXT UP
Life
Cara Delevigne Is Getting Her Own Sex Docuseries
Life
Mo Trailer: Ramy Actor Mohammed Amer To Star In A24’s Netflix Comedy
Life
Georgina Sparks Is Gossip Girl’s Worst Character
Fashion
The Chunky Jewelry In Not Okay Is Actually A Fashion Collaboration