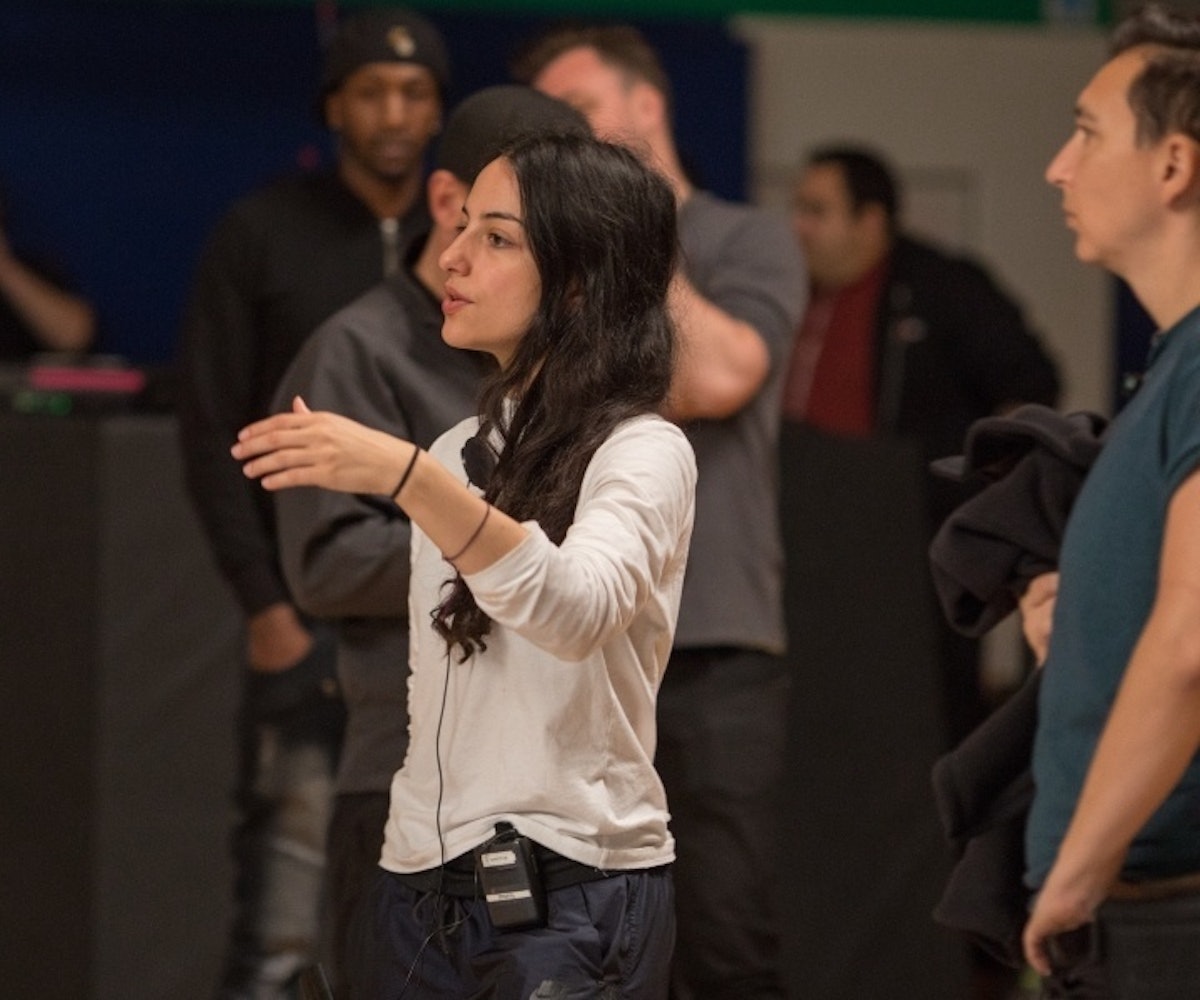 The eyes of faithful Euphoria viewers may have perked up recently, after seeing the trailer for another teen drama headed to HBO: Share.

The film even looks similar to the Zendaya-led series, thanks to its leading lady of color (Rhianne Barreto) and the noir-ish, sprawling wide shots. The aesthetic similarities exist, at least in part, because Share's director, Pippa Bianco, also directed an episode of Euphoria, but the biggest similarity between the two projects is the harsh light they shine on the intimate struggles of teen girls.

Share is not for those looking for a neatly packaged narrative about sexual assault: Bianco's first feature film begins with main character Mandy (Barreto) waking up in her front lawn after a night of drinking, bruised and unsure of how she got there. Things go from bad to worse when she finds out that a partially nude video of her is being shared around her school. This raises even more questions for the teen, who just wants to know what happened to her and is struggling to handle the violation on her own terms.

Bianco does not offer a perfect victim, a perfect hero, perfect allies, or a perfect ending. But that's what makes Share so real and so powerful. I spoke with Bianco (full disclosure: we met through a mutual friend, and are now friends ourselves) about her inspiration, the message she wanted to convey, and why she's okay if not everyone likes it.

Check out our conversation below—warning: there are some spoilers—and watch Share when it premieres tomorrow night on HBO.

Tell me about your inspiration for the film.

I had a friend who was involved in a similar scenario. He made a video. That's when I was 19. Thinking about that: How could someone I care about who has a best friend who is a girl, and is a good person do that? What makes it that easy?

From an aesthetic point of view, I love [Michael] Haneke films in particular. There are a couple of his films that I think a lot about that are about watching and what it means to be a voyeur; Benny's Video is a film I think a lot about. And I love horror films, and it's very hard to find ones that aren't about perpetrators. I don't know if it's hard to find or that people don't try to film a story where the point of view is that of someone who is viewed as a non-traditional protagonist, or victim, or survivor, or someone who is not perpetrating. It's much easier to craft a repulsive narrative.

Most people in my life who have been through something like this don't necessarily choose to pursue legal action, and I don't think that's any less of a heroic choice. I think that there's a lot of dignity and power and strength in that voice... that choice to want privacy. I don't think that there's moralizing on any end of the spectrum. I worked as a crisis hotline operator in college. The most oft-repeated piece of training was that you do not offer advice. You offer people resources. You cannot tell them what is best for them. That is not what you're here for. You don't know what's best for people. You can offer tools, but at the end of that, you have no idea what's going to be the right choice for them.

There are going to be people who are not satisfied with the outcome of the film or the choices that Mandy makes. I found it to be satisfying, because that's often how these cases like this get resolved—there is no resolution.

I spoke to a lot of different lawyers. Some I would not recommend [laughs], but others I would for people who seek out counsel in situations like this. I think it depends on what you're looking for. I think anyone would agree that the legal system is not set up to support survivors. It's just not. I think there is a lot of public policy work that is being done to make it a healthier process. Even if you have a positive outcome, it comes at a great cost. It is a very tenacious and brave thing to pursue legal action. It is also a question of your resources.

I'm hesitant to say any of that, because, if that is something that someone wants, there are resources for them to find help. I don't want to discourage anyone. But that's what the film says: How do you dignify someone's choice without saying, "This is the right way"? To me, it was really just about celebrating the heroism of someone just getting out of bed. You can make an unpopular choice, but if it's a deeply personal choice and it's for you, then it's heroic. If you're just deciding that you want to play basketball and go back to school, that's heroic. If you want to become a national advocate, that's heroic. Just getting out of bed is what matters; whatever that looks like for you.

Share really captures how complicated the aftermath of sexual assault can be. I can tell how you drew from the experience of knowing someone who was a perpetrator, because one of the most painful things to watch is Mandy deal with the complicity of those in her own social circle.

It's much more painful and complicated. It's important to understand that someone can hurt someone they care about. Hurt doesn't have an "on" and "off" switch. Some of the girls I interviewed had contact with their perpetrator afterward. Oftentimes that is something that people fall back on, especially in a legal framework: "You guys hung out afterward," "You guys still texted," "You guys went to dinner." But that has nothing to do with abuse. That has nothing to do with violation. Those things absolutely coexist. [Major spoiler ahead!] Not to excuse what Dylan does at the end of the film. Some people [who have already seen the film] are like, "Does she delete the video because she cares about him?" No. I hope that that's clearly presented in the film. He asks if she wants to hang out, and she says no. It's not about him. To me, it's not his movie. People are like, "What about Dylan? He's going to get away with it." But it's not about Dylan. It's not his movie.

Are you ready for the public response to this?

I'm a private person. Maybe that's unsurprising given the message or themes of this film. I really value my privacy. In some ways, I'm not prepared for it. But I made the film in concert with my own experience, [those of] the people in my life who are survivors, and, in one case, a perpetrator, and also with a group of thoughtful consultants. [They] were really generous, shared a lot of their experience and insight, and were in conversation as part of the research for this project. They were the first to see it. I draw a lot of peace from that. I hope it's something that people who don't share this experience can draw a lot from. But I think it's more important for people who have had this experience to feel honored by it, and that the people I made it with feel honored by it. I feel like that is good armor to go into this experience with.

I personally feel like when you make a film, you're not entitled to people liking it. You're not opening yourself for harassment either, but in terms of people being like: "I don't like this"; "I don't agree with this"; "I don't get this," that's why you put it out there. As long as I've done my best to present the situation truthfully, that's all I can hope to do. I expect that there will be people who are really upset by it, and I think that that's probably productive. A lot of the films that I love are polarizing. I never thought this movie would make people comfortable.

[Laughs] Not that I'm a sadist. I think with a lot of the trauma in my own life, there is so much shame that comes from the gray areas. I don't feel the things I'm supposed to feel in this scenario. I'm not behaving the way I should behave. I don't look like the people who I see experiencing this. I think there's a lot of healing by just presenting more complicated pictures where it's not just a simple math equation of moral behavior. I had a lot of people [who saw the film] say she shouldn't be so drunk, she should have been drugged, or we need her to be so drunk in the movie that she's blackout. They really wanted it to be a more black and white responsibility. For her to be someone they had empathy for, she needed to be totally incapacitated or have no responsibility. That situation needed to be simplified, and I feel like that's really damaging.

It absolutely is. Because that is never what it looks like in the real world.

No. That's not how humans are.