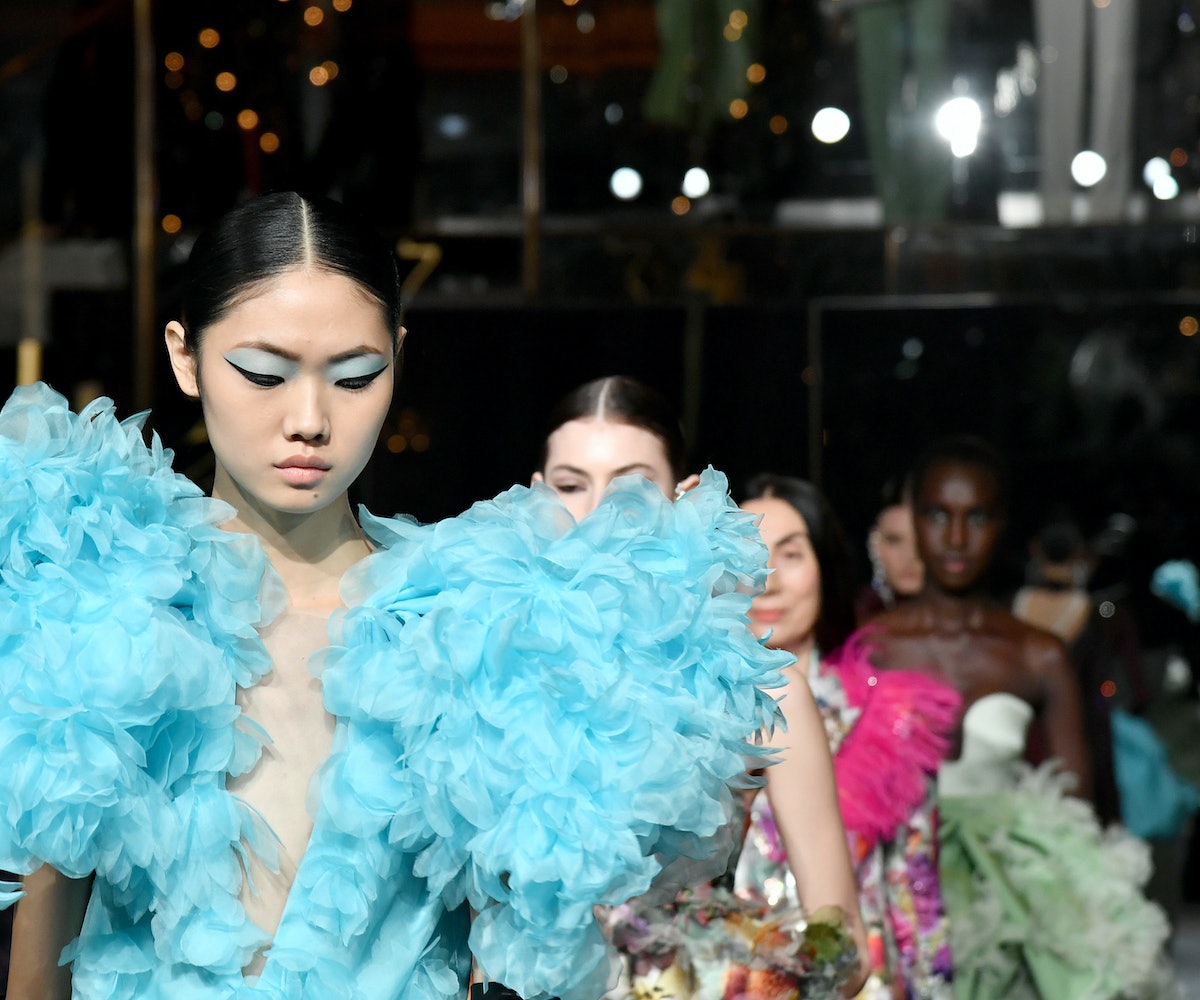 Photo by Slaven Vlasic/Getty Images for NYFW: The Shows

Why have one makeup look in your fashion show when you could have four? That was at least the train of thought backstage at Prabal Gurung's Fall 2020 show, where MAC lead makeup artist Diane Kendal and her team created four distinct glam looks, split between the 37 models walking in the show. Set in New York City's iconic Rainbow Room, the makeup was designed to be, as Kendal put it, a "celebration of women through the decades; joyful, glamorous, New York beauty." The finished product resulted in just that, nodding to the '30s, '40s, and '50s while still feeling modern — and cool — enough to copy the next time you plan to stay out past 9pm.

The most subtle of the four makeup looks, called Natural Gloss, was a relatively self-explanatory take on no-makeup-makeup, with a brushed '50s eyebrow, healthy flush of MAC Powder Blush in Fleur Power on the cheeks, highlighter, lip balm and mascara. Dark Beauty, one look Kendal says has a '30s feel, was all about a moody eye, and mostly "bare" skin elsewhere. The eye was lined with a black, MAC Powerpoint Eye Pencil across the lid, smudging it out for an imperfect, rusty look. For a Josephine Baker inspired brow, a thin line was drawn over the bare, natural brows using the eye pencil.

The show also consisted of a Crease & Line makeup look, a subtle, albeit impactful play on graphic lines. While the actual lids were left bare, the eyes were lined with MAC Pro Longwear Fluidline in Blacktrack, heavily all the way around. Eye Kohl in Phone Number was used to draw a dainty floating crease above the actual crease of the eye. The rest of the face was kept fresh, with a light brush of blush in Fleur Power over the apples of the cheeks. Blue Eyes, the last, and most bold, look took on two eye trends at once: the all-over blue eyeshadow — in this instance, using MAC's forthcoming Mint Condition Eye Shadow, available summer 2020 — and the striking, all full-circle shaped winged liner, using the MAC Brushstroke 24-Hour Liner in Brushblack. If you've already dabbled in finger painting your shadow along the lid, follow Kendal's lead and dial it up by applying shadow from eyelid to brow bone.

For Kendal, the four looks were not only a compliment to the collection, but an extension of them. "I think he wanted to keep that eclectic feel, because we're in the Rainbow Room, and he had the references spanning those few decades," Kendal says of Gurung's direction. "All of the dresses are very ornate, beautiful colors, rich prints and fabrics, and so he felt it would be good just to celebrate all of those different kinds of women with the makeup."