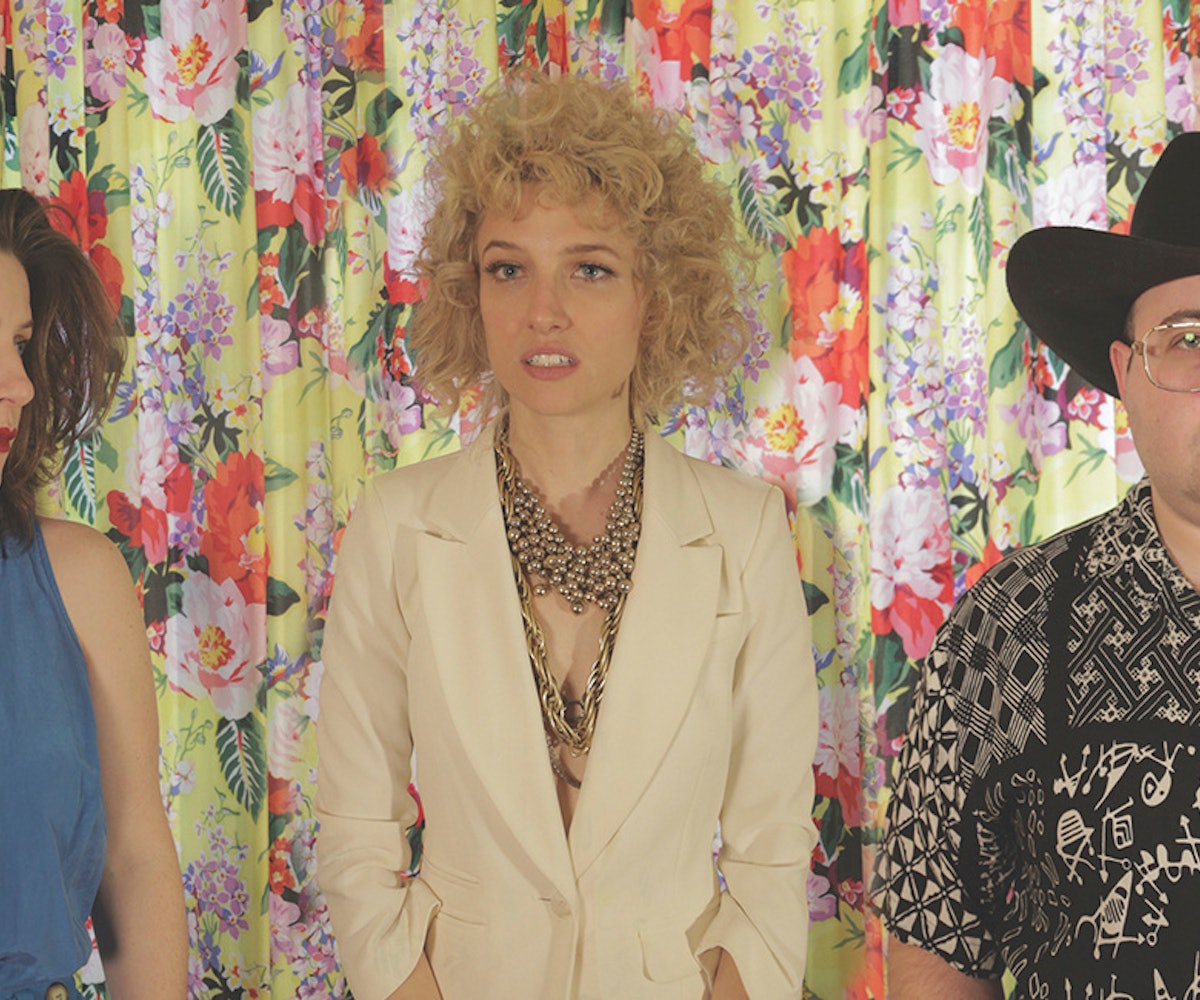 The band Priests have never shied away from politics. On "USA Incantations," from their 2013 release Tape Two, they took the signing of the U.S. Constitution as evidence of the nation's moral bankruptcy: "If you were not a wealthy white man who owned people or land you were definitely not invited to decide what this new country was going to be about," lead vocalist Katie Alice Greer states matter-of-factly on the track. With their roots in Washington, D.C., the band has always had front-and-center seats to the corrupting power carried out in the nation's capital, and their time touring the country over the last few years has let them see the moral rot that's spread from our capital throughout the country.

Still, on their new album The Seduction of Kansas, you won't find anything quite so direct as "USA Incantations." That's not to say that politics aren't still on the band's mind: the album's title and many of its themes were inspired by Thomas Frank's book What's the Matter with Kansas?, which unravels the ways in which political elites have weaponized divisive social issues like reproductive justice and gay marriage to harm working people in many Republican stronghold states (and everywhere else, too). Still, the band faces a challenge: How do you make music that's critically engaged in the world we live in, without trying to come off as snobbish or sloganeering? The group has always played around in this tricky middle ground, holding a mirror to the world without always giving their critics anything too literal to pin their viewpoints down.

That's not to say the band shies away from directness when it proves useful. On the opening track "Jesus' Son," the band reckons with what happens when male entitlement is carried out to its ugliest extremes. "I am Jesus' son/ I'm young and dumb and full of cum… I think I'm going to hurt someone," Greer sings, with a ferocity that reflects the terrifying certainty with which many powerful men carry themselves. For Greer and bandmates GL Jaguar (guitar) and Daniele Daniele (drums), it's the interplay of directness and abstraction, politics and poetry, that's helped their music continue to evolve.

NYLON caught up with the band while on tour in South Carolina, discussing the ways that politics animate their work, how running a music label has created a musical community, and how they'd change the music industry.

I think a lot about your work in connection to the band Shopping: Both bands seem to have a clear sense of a specific politics animating the work, without being preachy or sloganeering. How do you try to manage that challenging balance?Katie Alice Greer: We're not trying to give anybody the answer or be dogmatic. I hate when people think about our art in that way.

GL Jaguar: I hate being told what to do, I don't want to tell anybody else what to do either.

Daniele Daniele: The art that I love the most is always stuff that makes me both think and feel in equal measure, you know? If we were to tell you what the meaning was or try to sum it up, that would limit its sting, and it's interesting to see what other people draw from it. Because that's the whole point, right? We're trying to make you think about what the connections are, that it may be greater than the sum of its parts.

You've done a lot with the label you run, Sister Polygon Records, to support other incredible acts like Downtown Boys and Snail Mail. What does it mean to have created that community around yourselves?

DD: It's weird, because it's been both a conscious and not a conscious effort. It's often just been a product of what our values are as people and how we live our lives. It also is a weird thing to talk about, because when you're talking about a community of people, you're talking about many individuals and many perspectives, and we never wanted to make something that we had proprietary ownership over. Like, sure, we started this label, but it's nice when our friends wanna give us the chance to release their music. But in the broader scheme of things, I wonder constantly what the roots of my personal values are. I do deeply believe in community and teamwork, and some of the tenants of socialism, which is like, how do you conceive of your reality as something that involves thinking of everyone rather than just thinking of yourself? We share that sensibility, and so that's impacted how we interacted with people around us.

DD: We've learned a lot from our friends. We've made a lot of stupid mistakes, and I don't want it to seem we haven't, that like we have a lot of friends who came at us with love and were like, This is a learning opportunity.

GJ: At the end of the day, it's just nice to find people that are on the same wavelength. Even if it's just little things—like with Shopping, it's always really nice to see those people. It's kind of affirming and reassuring that there are people that share similar sentiments to you across the ocean, or even in other parts of the country.

KAG: Whenever Priests and Shopping play a show together, there's an unofficial rule that both bands' guitarists can come out when the other band is playing and dance. There's really funny videos of Rachel [Aggs from Shopping] jumping during our set and dancing, and then GL jumping the stage and dancing during Shopping's set.

Where do you think the music industry is today? How would you try to change it, from what you've learned in running a label and keeping the band going?

GJ: I grew up in D.C., and it was just kind of like, "Oh, you want to make a record? Well, you just gotta do it." So it's always been this mentality in the back of my mind, but it's also disconcerting that now we live in a time that if you're labeled as a DIY band, it's kind of like a marketing tool, and it devalues a lot of what other people are doing.

KAG: We really don't want to be described as a DIY band, or in the DIY scene or anything.

GJ: Which is hard, because we do a lot of work for ourselves, but again, it's kind of devalued.

KAG: Or like, we're literally just a small business.

DD: But you know what? If you're in a small business with your friends, you're not a faceless bureaucracy that's based on reputation. One thing that I've learned about myself is that I have a hard time lobbying, saying, "Pay me the right amount that I deserve." I don't think people are ever good at that, at least growing up under capitalism. But having bandmates, I can't let them down. So I've gotta keep fighting harder for myself, if I'm also fighting for my two best friends as well.

But similarly with being in a label, sometimes I have a hard time fighting just for free, because I feel like I identify with the band, but if I'm fighting for an artist, it's easier for me to get all angry and demand what I deserve and what our artists deserve. It's kind of fucked up, and I think it's how I was socialized into my femininity in a lot of ways by playing the mom role—in playing the mom role, I feel like I can fight for others and get and get angry and be mean, but if I'm just fighting for myself I'm not. That social training, deprogramming myself, I haven't quite gotten there yet.

We are a business, because we have to function under capitalism, but it's definitely more socialism than the DIY model, because the whole idea is that we realize it's great to be a part of a community, that you have more strength to fight for yourself and your community if you identify with your peers.

KAG: My alternative model for the music landscape is that me and my friends have money. Just give us the keys to the kingdom, that's the alternative business. Get, like, all of Sony's money and put us on the board of their companies and we'll fix everything.