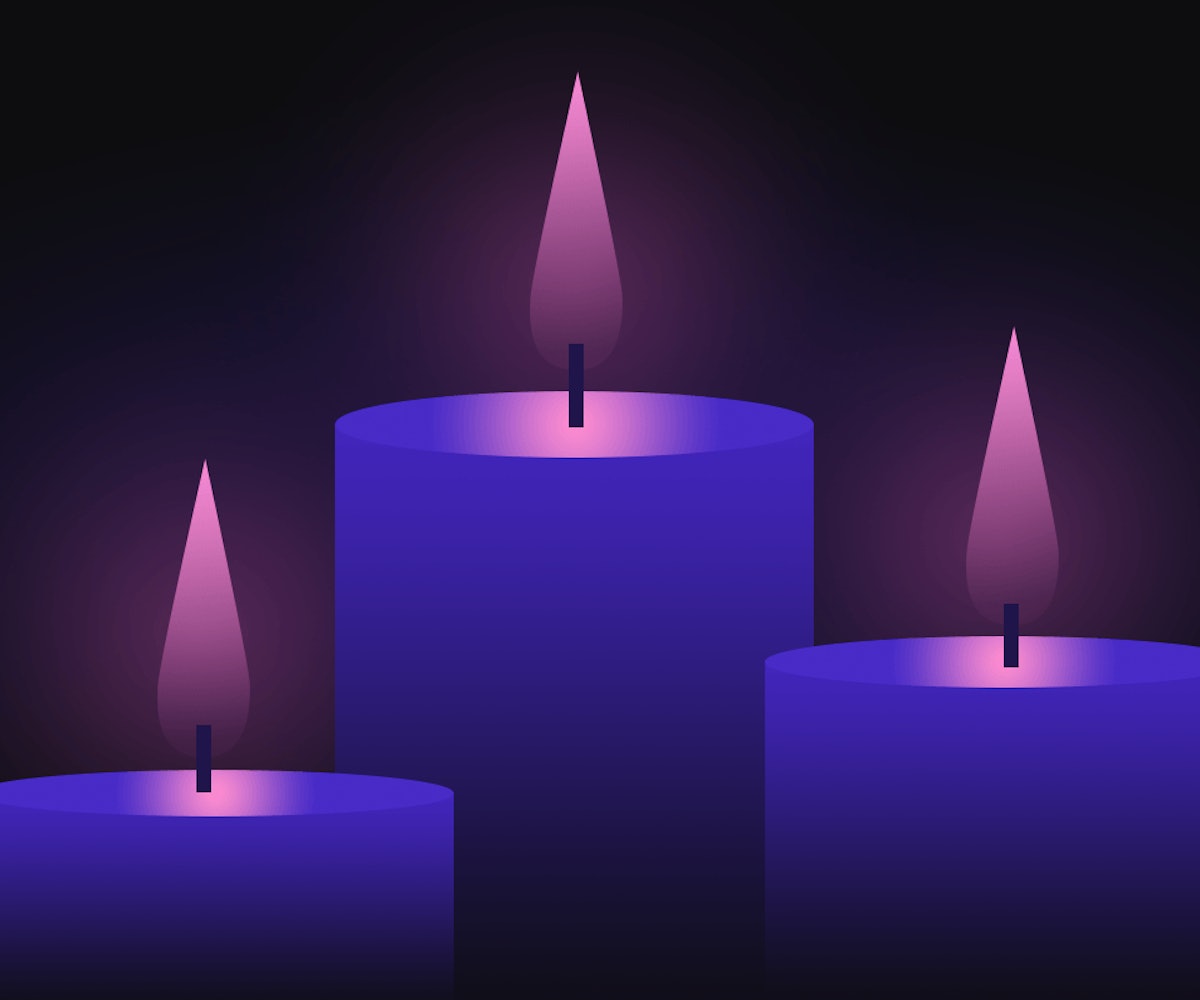 My Mum and Dad met at a nightclub, a fact that's perpetually ironic to me—their only spawn—as I have never set foot in any club that plays music that makes you want to move your body.

It was the late-'70s, and they were both entrenched in the Northern Soul music scene, which swept through unremarkable towns in Britain, providing places young people could go to swap records imported from exotic locales (like America) and dance the night away. I have always romanticized this, had nostalgia for a time I wasn't alive and a subculture I didn't experience.

When I was growing up and turning into a smug alt kid, it was also a way of trying to relate to my parents—especially my father, who had gone from being the person who taught me to ride a bike and would give me pony rides on his back around the living room to someone with whom I had difficulty connecting as I moved through adolescence. He worked incredibly hard at his manual labor job to keep us in the middle-class lifestyle to which we'd become accustomed to: nice family houses, eating out at restaurants, and vacations abroad.

The summer before I turned 16, we went on a trip to Florida and had the best holiday. We saw dolphins from our rental apartment balcony in the mornings, and our time together there was full of joy. In the months that followed our return home to England, Dad was diagnosed with lung cancer. He died nine days after my 17th birthday.

"When death occurs during adolescence, it complicates a teenager's natural process of defining her identity in the world," professor David Balk states in Adolescent Encounters with Death, Bereavement, and Coping. Because I was in the fortunate position of having had a happy childhood, I felt safe as a teenage girl to begin developing a sense of self, to figure out what I did and didn't like and what my values and beliefs would be. Music was a big part of this equation, an eclectic selection of albums was in constant rotation in my house thanks to my parents, which naturally led to me discovering the alternative rock that exploded onto MTV in the early 2000s, to which I eagerly pledged my allegiance. Mum often tells me how much Dad loved that I was an "individual."

After he died, I doubled down on defining my identity through my clothes and the pop culture I consumed. Looking back now, this was absolutely a way of controlling my own narrative after such a devastating loss and disruption of the status quo. My father was always a bit of an enigma (a true mysterious Scorpio, just like me); he could be acerbic with his friends, but then was quiet at home in a way that was intriguing. He managed to convey his personal tastes surreptitiously which made them all the more interesting: those dog-eared Stephen King novels and historical tomes about the Tudors scattered around, and his immaculate mod-style shirts and freshly polished dress shoes in his closet. I studied him without being aware I was doing so, and to me, it was a positive thing to be into stuff like he was. It was the infancy of my grief and personal process of keeping his memory alive, and individuality is something I still pride myself on now as a fully fledged 30-something.

It seems contradictory, but as secure as I was about what I liked and who I was, severe periods of anxiety and depression suffocated the majority of my 20s in the wake of him being gone. My unhappiness was directed inward, and the older I got, the less self-worth I seemed to have, much to the distress of those closest to me. "The loss of a parental figure affects the self-esteem of girls to a greater extent than their male counterparts," writes psychology professor Timothy J. Strauman in Depression in Adolescent Girls: Science and Prevention, which seems both unfair and a predictable product of the patriarchy. Professor Strauman goes on to say that "female teenagers have also reported greater anxiety over abandonment," which is something I can personally attest to, and am still trying to combat through therapy and other self-care practices.

When I left for university the year after my father died, I jumped straight into an intensely codependent romantic relationship which continued for years past what should have been its expiration date, out of fear of being alone and a need to fill a void. My natural inclination to catastrophize certain situations—either with my career or at times with a friend—stems from my fear of abandonment; and, as a professional armchair psychologist, I realize my pattern of predicting the worst is to soften the blow for when it actually happens. My current boyfriend reminds me that this might also be a self-fulfilling prophecy.

To get more understanding, I reached out to my friend Fiona, who lost her father at 16 and is now in her 40s, to hear her thoughts on the aftermath of bereavement and how she feels that trauma affected her as a young woman. I was surprised to learn that her experience didn't exactly replicate mine, and, admittedly, I was under the impression that female grief would take one form considering our similar circumstances.

"[His death made me] a bit more responsible at too early an age to be responsible," she said. This correlates with Dr. Robert J. Haggerty in Stress, Risk, and Resilience in Children and Adolescents, who notes that "because these bereaved children assumed new tasks and responsibilities due to the absence of the parent, they boosted their self-esteem." Instead of self-demonizing and assuming blanket negativity, Fiona says she is "very pragmatic about the rhythm of life now. I'll never be completely blindsided by something again as I've had to accept that this is the way of life."

My 30th birthday was a turning point in how I related to and treated myself, which has subsequently helped my relationships with others. When considering positive male presences in my life, in lieu of my father, I feel very fortunate. My grandfather has dementia, a false leg, and a plethora of minor ailments, but he has resounding strength indicative of his generation and is at his happiest surrounded by family, guzzling down pinot grigio. Even if on occasion he can't express it properly, he cares for my mother and me deeply. My exceptionally talented and infinitely patient boyfriend is 13 years my senior, and while I don't believe our age gap means I have "daddy issues" (gross), I do acknowledge that my natural desire for love and support is being fulfilled within our relationship. These aren't things exclusively provided by parental figures.

My grief has been a measured process, taking on many forms over the years. I'm realizing that the journey is different for everybody, and the way it manifests for me now is something I welcome as a source of comfort. Dr. Susan Schwartz writes, "When absent, the father figure sinks into the unconscious. The daughter has to find a way to access him and what he represents." Although my Dad and I weren't very close during my teenage years (I think he found me difficult to fathom because, to quote queen Brenda Walsh, my hormones were raging), I feel more connected to him now as an adult, almost 16 years after his death. Through fragmented memories, old photographs, personal belongings Mum has kept, and anecdotes I've heard, I have been able to piece together his essence, and this is how I have taught myself to cope. I have such a clear semblance of him as a person that I think we'd get on fantastically now, we'd bond over good whiskey, and I could tell him what I've been writing, and we'd discuss theories on the new Star Wars films. Maybe this is just my subconscious pacifying me, and if it is, there's a great strength in that.

I know he was a person who, as a young man, let a friend attempt giving him a sailor-style tattoo which left a solitary blue dot on his arm (obviously the limit of his pain threshold). I wonder what he would think about my tattoos. I know he was a person that liked American Graffiti and Apocalypse Now, Radiohead and Roxy Music, and despite his physical body not being here, I'm grateful that these summations of his taste are accessible to me at the touch of a button. I know he was a person who cared about his family and the value of hard work. I know he wanted the world for me, and I know he would be proud of the woman I've turned into—a woman who is resilient and carving out a happy life for herself.

Occasionally, I'll make a wry comment and can hear him saying it in the exact same cadence, and I'll know he and I are closer than ever.

NEXT UP
Beauty
September 2022’s Best Beauty Launches Will Keep You Cozy And Cute Throughout The Fall
Beauty
Meet The Beauty Pros Who Keep It Girls Looking Like It Girls
Life
On Repeat: Vaquera’s Away Collaboration Is Brought To You By Britney Spears B-Sides
Life
Away’s Second Designer Collection Will Have You Traveling In Style