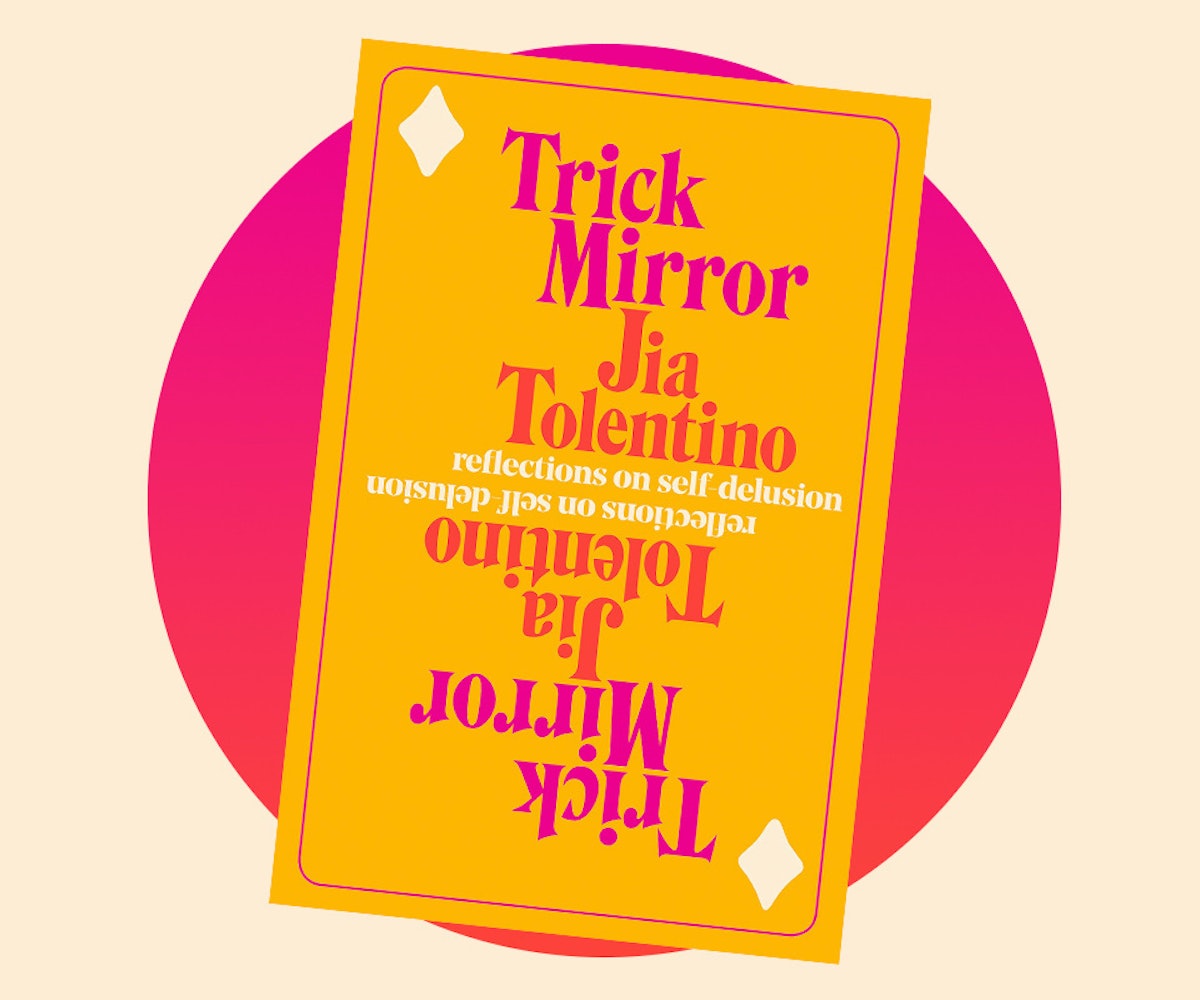 On my way home to write this review of Jia Tolentino's collection of essays, Trick Mirror: Reflections on Self-Delusion, my phone lit up to notify me that my monthly student loan payment had been accepted, making a mosquito-sized dent in the Goliath swamp of my student debt. More notifications appeared: Trump tweeted something harmful and distracting, and four news outlets wanted me to know. I scrolled mindlessly through Instagram, feeling bored with my self-deprecation as I compared my body to the influencers' bodies peacocking on my screen, knowing they were making a buck or two as I sucked my belly in an inch or two. I considered reading my book, but by the time I looked up from my phone, my stop had appeared and I was spat out into the sticky night. The internet lingered on me like a smell as I trudged toward my apartment, trying to distinguish truth from aberration, my self from a performance of my self.

Tolentino's book—a flawless, triumphant debut from the New Yorker writer who examines our era's blunders with the precision of a surgeon and the dexterity of a docent—illuminates the ways our identities are shaped by technology, politics, the economy, mainstream feminism, literature, religion, and capitalism. It's brilliantly operatic because our world is a colossal, continuously refreshing drama, real or otherwise. Tolentino warns the reader in the introduction that there will be no clean conclusions, that "a well-practiced, conclusive narrative is usually a dubious one." No one is safe from themselves. Not you, not me, not Tolentino. Trick Mirror reflects like a prism, alighting all the dark corners of our misshapen egos with Tolentino's signature sincerity—intrepid and sharp and here to wake you the fuck up. I will be telling everyone I know to read it.

The sixth essay in Tolentino's book, "The Story of a Generation in Seven Scams," is a masterpiece. It opens with the story of Billy McFarland, the manchild responsible for the 2017 Fyre Festival, and by proxy, the Hulu documentary that was on heavy rotation in January earlier this year (and which featured Tolentino as a talking head). I first read about the documentary on my phone, on yet another train ride home. I remember thinking how stupid it was: A 20-something white guy had convinced young people with money that a sham party was waiting for them on an island, and then, that people had actually shown up, and then, that McFarland had the audacity, after he was arrested, to target the same people he had scammed in a new bogus venture. Tolentino unpacks the Fyre timeline in "Seven Scams" with cinematic tact and then pivots to the bigger picture with a perfectly devastating sentence:

"Fyre Fest sailed down Scam Mountain with all the accumulating force and velocity of a cultural shift that had, over the previous decade, subtly but permanently changed the character of the nation, making scamming—the abuse of trust for profit—seem simply like the way things were going to be."

The essay then unfolds like a libretto. Tolentino begins with the 2008 housing bubble and financial crash. Next, a similarly fraught financial clusterfuck: student loan debt. Tolentino presents us with disturbing figures: Over a period of 13 years, the average debt burden for college students doubled, from $18,000 to $37,000. Last year, she writes, student debt in the United States was over $1.5 trillion. "Trillion" has always seemed like a made-up number to me. Salary discrepancies between CEOs and the average worker are egregious, she writes. Millennials turn to contract work and are labeled as "lazy" by the media. Divisions among generations—all of us voters and taxpayers—ensue. With little access to tangible equity, millennials challenge this floating feeling by creating a sense of self, or, perhaps, a personal brand.

Tolentino then presents the Social Media Scam, the monetization of our individual desires and decisions (read: our selves) captured in our digital worlds, escalated by the nondescript, all-powerful Mark Zuckerberg at Facebook, and adapted by the myriad of platforms we spin through every day, who watch our every move and capitalize on our buying power. This is inextricably tied to the Girlbosses Scam, defined by Tolentino as "market-friendly feminism, the idea that personal advancement is a subversive form of political progress." All this churning of capitalism-as-consequence-and-affirmation stirs up the scammer antiheroes we love to hate, and which Tolentino catalogs: McFarland, Anna Delvey, Elizabeth Holmes. Many of us seem to hate Jeff Bezos, and yet, many of us still order toilet paper using Amazon Prime; Amazon is the subject of Tolentino's Disruptor Scammer, a slippery character who claims to ease our financial malaise by promising the cheapest products and the quickest delivery—at the cost of its laborers who are treated like replaceable bar rags. The essay culminates with the scammer who gets the most daily attention: Trump. He exploited and swindled his way from real estate to reality TV to celebrity to presidency. We watched the whole thing happen.

Taken all together, in one crunchy, overwhelming bite, Tolentino explicates that grimy aftertaste sticky in our mouths: "One of the most soul-crushing things about the Trump era reveals itself: to get through it with any psychological stability . . . a person's best strategy is to think mostly of himself, herself, [themselves]." She continues, offering us a simple Venn diagram and a finger-flick between the eyes: "I have felt so many times that the choice of this era is to be destroyed or to morally compromise ourselves in order to be functional—to be wrecked, or to be functional for reasons that contribute to the wreck."

Delusion is a close cousin of complicity. Various times throughout the book, Tolentino offers up her own complicity, and the ways she's benefitted from iterations of these scams. Two essays take on a major player in our scam culture, the internet—a place where Tolentino thrives, or the place, perhaps, where you discovered her work—"The I in the Internet" and "Always Be Optimizing." For this first essay, Tolentino mines dusty old webpages to quote her 10-year-old self, who discovered the internet in 1999 and promptly began to assemble and disassemble its pieces, like a kid would with a new box of Legos. She built her own site and liveblogged her thoughts and experiences. She even had an FAQ page; at one point she blogged, "I'm going insane! I literally am addicted to the web!"

The internet has brought Tolentino a sort of prosperity; she was a contributor to The Hairpin in its early aughts, and a deputy editor at Jezebel, and now she is on staff at the New Yorker. Her work is published on the internet, and then retweeted thousands of times on social media. "I have benefited," she writes, "from the internet's unhealthy focus on opinion." The machine we all steer, she argues, is a vehicle of distraction, its inception tied to our economic turbulence: "There is less time these days for anything other than economic survival," she writes. In the meantime, with more channels connecting us to more information, the internet becomes a seductive stand-in for action. Instead of door-knocking during primaries, we retweet candidates. Instead of marching in protests, we update our bios to say we are "intersectional feminists." Another kind of inaction ensues: trolling. Trolls proliferate because, as Tolentino writes, "it's much easier to organize people against something than it is to unite them in an affirmative vision." And with the facelessness of the internet, people are empowering themselves to unite online in ways that they may never do in-person.

In a section that made me laugh out loud, Tolentino teases out the sickly spiral of what happens when a woman expresses an opinion online. She presents a hypothetical (that is not a hypothetical for many): a troll sends an online writer, who they know or think is a woman, a threatening email, after reading the writer's opinion piece on a topic related to, say, sexual assault. That writer writes a column about said troll. The column attracts media attention; the writer is invited on TV to talk about her experience:

"Then I would get trolled even more, and then I could go on defining myself in reference to trolls forever, positioning them as inexorable and monstrous, and they would return the favor in the interest of their own ideological advancement, and this whole situation could continue until we all died."

I laughed at that last part—the kind of laugh that quickly descends into that Chrissy Teigen cry-face meme from the 2015 Golden Globes. Then I felt exhausted. In "Always Be Optimizing," Tolentino writes about the "ideal woman," that is, "an ordinary woman reproducing lessons of the marketplace." We may call them "influencers" now, but in the Victorian era, Tolentino writes, she was the "angel in the house," the wife and mother, and "in the fifties, she was, likewise, a demure and appealing wife and mother, but with household purchasing power." Today, we are targeted and defined by our purchasing power, and the internet is ripe with expressions of this, even when we declare that having an online identity—the counter to modesty—is empowering us. Self-care, as Tolentino reminds us, is just another beauty campaign. "Instead of being counseled by mid-century magazines to spend time and money trying to be more radiant for our husbands," she writes, "we can now counsel one another to do all the same things but for ourselves."

This explains my exhaustion. Tolentino's methodical historical research reminds me that we are hamster-wheeling this thing; it also reminds me to demand context. I'm not the only one who will laugh at the image of us trolling each other until our deaths, but that's because humor is an adrenaline shot in a perpetually tiresome, dark existence in which context often seems elusive. Humor is good; knowing why we are laughing and how to articulate that is even better.

Tolentino's oeuvre is a looking glass of historical blunders reflected onto today. In an essay about the wedding industry, she takes us from the introduction of the white gown by Queen Victoria in 1840 to the copywriter responsible for the immortal slogan "A Diamond is Forever" and with it, the multibillion-dollar diamond ring industry, to the constitutional right to gay marriage and how it "brings the institution into its viable future." In my favorite essay of the book, "Pure Heroines," Tolentino examines how selfhoods are informed by literature and highlights a delightful number of books, protagonists, and writers: Harriet the Spy, Katniss Everdeen, Anna Karenina, The Virgin Suicides, Elena Ferrante, Simone de Beauvoir, The House on Mango Street, Jo March. I love this essay because it's fun to read a writer who is so skilled and so obviously enjoying her project; I love it, too, because it reminded me to ignore my blazing screen, to slow down, to read and dog-ear and litter a book with marginalia. The notes I take when I'm reading reveal more about me to myself than any tweet I may blast out into the collapsed, digital world. Trick Mirror is jumbled with my chicken-scratch, and with that I mean, it brought me closer to myself.

Trick Mirror: Reflections on Self-Delusion is available for purchase here.