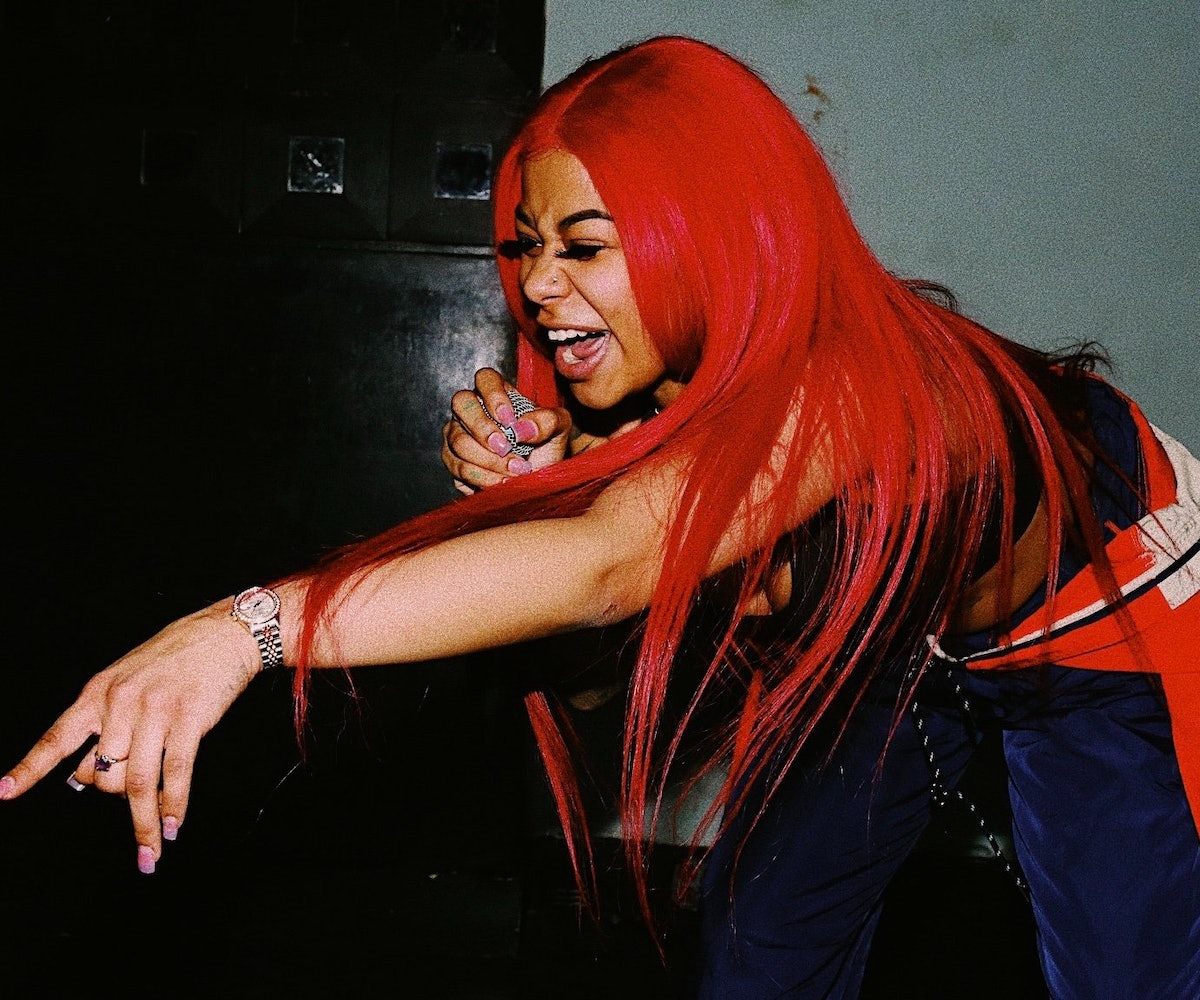 S3nsi Molly is here to prove she can rap as well as any of her peers. Hailing from Arlington, Texas, and equipped with all the pretty girl swag that comes from that particular home state, Molly (real name Marissa White) is here to make music and turn up.

Though she started rapping only two years ago, the female MC has signed to one of music's most reputable labels, Def Jam, and has a vault of unreleased bangers to come. Exploding onto the scene with her record "223" alongside Lil Brook, you can also find her on Def Jam's Undisputed compilation album alongside a slew of hungry, talented artists from all around the U.S.

NYLON recently sat down with S3nsi Molly during a studio session in North Hollywood, with loud and good vibes courtesy of Sour Matt.

You're from Texas, how does that play into your life and career?

I think Texas is boring, but everybody loves Texas. When I tell people I'm from Dallas, or from by Dallas, they're like, "I wanna move to Dallas." I'm like, "The fuck?" Arlington is 30 minutes from Dallas. I don't really talk about being from Arlington or anything, so it don't really influence me.

You still live there?

I still stay in Arlington. I just come out here to work, I like recording in L.A.

What keeps you back home?

How important is it to come to L.A. as an up-and-coming artist?

Every time I come to L.A., I work. I turn up. Everything just expands. Everything is just bigger, so it's important to me. I meet people, connect, network.

At what point did you realize this music thing was for real?

Around November of 2017. Fuck, I forgot it's 2019. I came to L.A. and spent a week out here. I was with some friends and just seen how they was living. I came back to Dallas and was like, I can do that shit, so I got back in the studio, I was just rapping every day. I felt like I sucked. I could not do that shit. My homeboy was like, "You can rap, just keep doing it." So I kept doing it, and it worked out.

Bring us back to life before music.

How did you build your fan base organically?

I started off on Instagram. I had like 10K followers, and I just kept posting my music. I'm not on Worldstar or anything, it was just all natural. All my shit is authentic.

What sets you apart from other female rappers?

Female rappers are annoying. Their voices are high-pitch, and they just talk about their pussy all the time. I don't like that shit. My shit, niggas can rap my shit. Like my whole song, a nigga can sing it if they wanted to. That's what's different.

What was the inspiration behind your name?

Molly came before S3nsi. My last name's White, so there was a Migos song called "Hannah Montana." It goes, "I got molly, I got white," so I made myself Molly. Then S3nsi, in high school I started smoking a lot. I was just reading shit about weed. It said something about Sensimilla, a type of cannabis with no seeds. I just named myself S3nsi and ran with it. [laughs] I started getting fans, so that's been my name.

Is there any significance in "3"?

It's a long story. We not gon' talk about it.

Can you give us the short version?

You dropped InFull Effect in May. Talk about the creative process and how long it took you.

Full Effect was the first tape I dropped. It was tracks that I just recorded. I didn't really know that I was gonna put together a project, I was just like, "It's time." When I dropped "223," nobody knew the song was "223," but it went viral on Twitter. It did two million views on Twitter. Everybody was like, "What is that song?" So then we shot the video, and it went crazy. But it took about a month to record the songs, put them together, and drop.

Bring us back to that studio session for "223."

It was in a bedroom. Yep, we were going through beats. All the beats sucked. As soon as that beat came on, I said, "Five racks then I turn it into 10, aye!" Then we loaded up that beat and then punched in. Me and Brook went back-and-forth. At first, we were like, "This song sucks." Then shit, it just turnt up out of nowhere.

Talk about your friendship with Lil Brook.

That's my sister, even though we not blood at all. I've been knowing her for a minute. She followed me on Instagram first. In high school, I had seen her at basketball games, etc. I remember the first time I met her. I was at a basketball game in Grand Prairie, and she was like, "Oh my god you're Molly, hey." That was the first time somebody recognized me. I wasn't poppin' at all in high school, I ain't had no followers. Then I was shooting a video in December of 2017, and she came to it. Ever since then, she was just at my house every day. One day, I told her, "Get on the song."

You and Lil Brook just put out the visual for "Texas."

"Bitch, I'm from Texas!" We just shot the video and dropped it, it's going crazy. There's a club called VLive Dallas, and a DJ that works there named Hit Dat. In the song, we say, "Hit Dat, come get that ho out of our section." 'Cause strippers always like to be in sections that they are not supposed to be in, to get money. [laughs]

You putting on for your city?

Yup. "Our shit a lil bigger 'cause bitch I'm from Texas!" Anything, talkin' about anything.

What is it you want fans to get from your story?

Just do whatever you feel like you wanna do. Believe in yourself. 'Cause I wasn't doing shit. I didn't know what the fuck I was doing. I didn't know what to do. In high school, I was crazy. I dropped out my senior year in 2016, 'cause I had got arrested. They was trying to put me in alternative school, so I just said, "Forget it." I ain't have no plan. Started rapping, and it took off.

What do your parents think?

My mom, that's my number one fan. She's got an Instagram. She posts everything. She gets everything. My dad, he proud of me, but he not on social media, so he don't get everything that's going on. He just gets, "Yeah, she's signed to Def Jam. That's big."

Before I was actually rapping, I done seen a lot of shit in the industry 'cause I was around it. Now that I am actually a rapper in the industry, I'm learning it from a different view.

What are some of your goals as an artist at this point in your career?

I wanna gain my fan base for sure. We starting tour this year, don't know when.

Shit, I still got my first advance. [laughs] I bought a Rollie. That was my biggest purchase. What else did I do? I spent it on weed. Make sure my people good, if they need some stuff. I don't just spend my money like that.

How's that Cali weed though?

I'm not gonna lie, some of this Cali weed is boosted. Cali weed, I been high and I been sleepy. I have to smoke though, I be dead. As soon as I wake up, I'll be like, "Um, I need some weed."

What's a normal day in the life? Walk us through.

Wake up, smoke a Wood, go to the studio. Might go shopping, go back home. [laughs] That's literally the life of me, I be in the studio.

Three things you need in the studio?

Backwoods. Weed, that goes with the Backwoods, Lemonade, for sure. Strawberry lemonade. Some type of candy, sour candy.

What would you be doing if you weren't doing music?

I would probably be stripping until I figured out what the fuck I want to do with my life.

What's the best encounter you had with a fan?

I was at Dave & Buster's. This girl came up to me and told me, "I just want to let you know that you're loved and that you're an inspiration." She was like, "You're about to cry," and I was gonna cry. I like, "Aw, you didn't have to tell me that." I love that shit. She could have just said she liked my music.

Who's the most played artist on your phone?

Calboy, but I just play one song by him, called "Envy Me." I really just listen to me because I don't know other music. I'll know a song, but I won't know the name of the song because it's just a song that my friend plays. I'll know the words 'cause my friends play it all the time.

Is it easy for you to just pick it up?

No, I don't even know my words to my songs. [laughs] 'Cause I make so many songs, I be forgetting.

What are you most excited for with the Undisputed album coming out?

Just that it's my first project I get to drop with Def Jam and it will be around forever. Working in Rap Camp was more fun than work although we were in the studio for hours upon hours. it's what I love to do and we're always begging to get in the studio. Plus the fact it was in L.A. was even better 'cause it was endless Backwoods. [laughs]

Anything else you want to let us know?

I need y'all to go stream my tapes and know that I am up next.