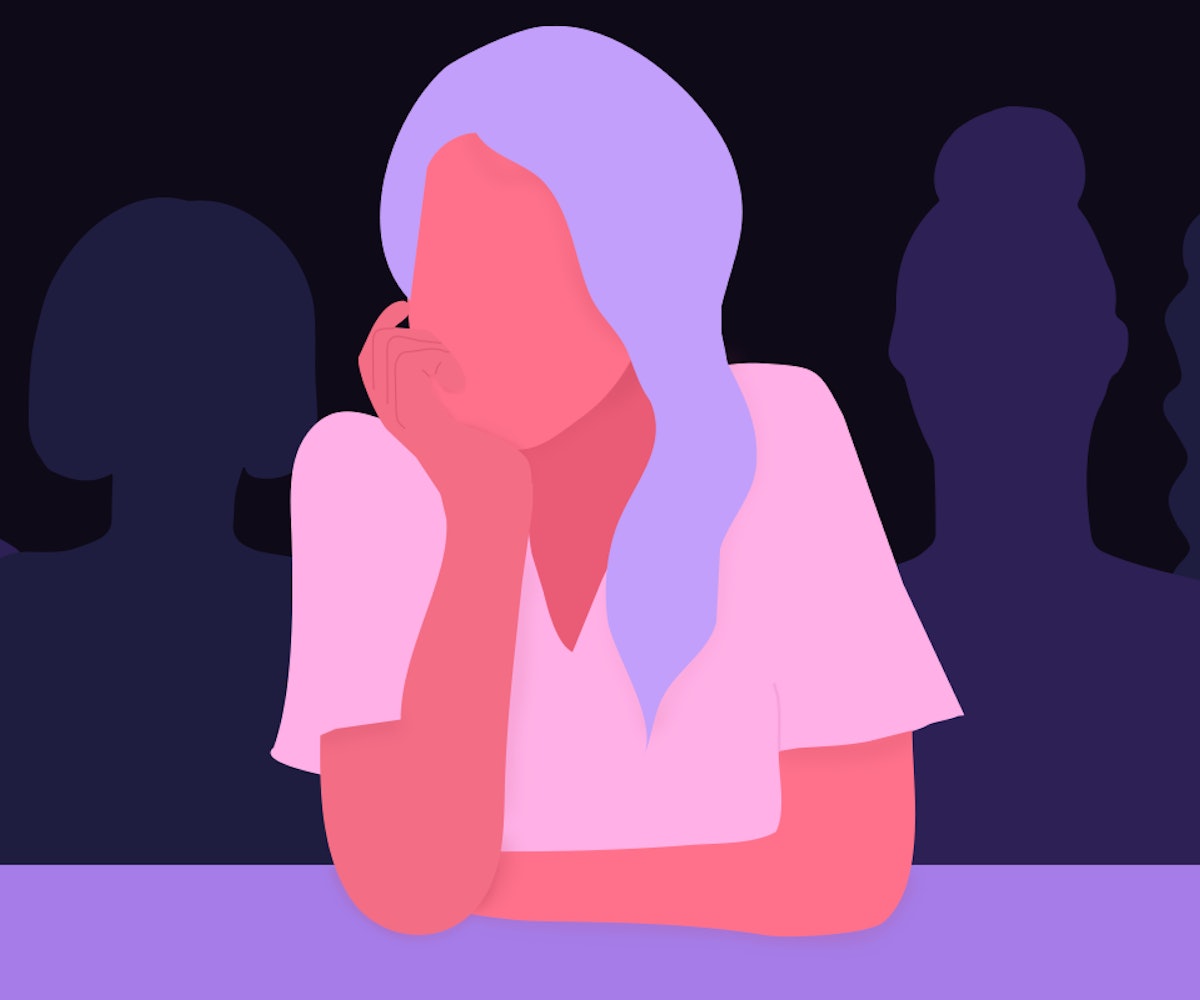 We were at a drag bar, perched on high stools picking at burgers and fries when my friend Macy swallowed hard, stared at me with a well of concern, and said, "I've never felt that way in my life." As queens in torn pantyhose and buff waiters in tight T-shirts whirred past us, I realized I wasn't in good company. Or, I wasn't with my people. I wasn't with a person who had ever experienced persistent anxiety, and it made me feel so, so alone.

I had been telling Macy about my fears surrounding dating—how first dates make me squirm, why meeting someone new makes my skull vibrate with "what ifs." The more jokes I started cracking—jokes that I normally exchange with close friends who also suffer from debilitating anxiety—the more her face began to darken. Apparently, hearing someone ask "when will death take me" is jarring to people who don't experience persistent existential dread. Her bubbly and sanguine energy soured, and she looked at me like I had just revealed I had a terminal illness.

"I actually love dating," she told me. Our armor went up, as we were both so alarmed by the other—her, upon discovering that anxiety rules my life and dictates everything I do; me, at the tough realization that not everyone suffers on a daily basis like I do, that some people just get to live. Since that night, I've had a few dinners with new friends that made me feel similarly, that made me feel unsafe. I felt like I couldn't be my whole and true self, like I should be hiding my "dark" side. But I also feel unsafe in the way that most people with generalized anxiety or panic disorders, or any range of mental illnesses, probably do: If something bad were to happen, or if I were to panic, I wouldn't be supported by this person. I wouldn't be around someone who would know what to do, or what I needed to calm down.

I've panicked in such a wide range of places and scenarios—on a date, on a plane, at a dinner table, in a car, at the movies, at a concert. There is no limit to what will make me panic and where I'll be when it happens. So, I like to cushion myself as much as possible, to insulate myself with people who "get it." Most of my closest friends share my struggles, so I can be assured I'm safe around them; I can be myself, and if for any reason, something sets me off, I can say, "I'm panicking, we need to leave," and they will usher me out the door without even pausing to breathe. That, to me, is real safety. And I don't want to spend time with people who won't do that for me anymore.

There was another dinner last week, the third in a triptych of discouraging scenarios, which sent me spiraling right there at the table. By this point, the conversation felt almost formulaic: The person across the table from me cracked jokes about how her life is in shambles, even though it's objectively great. And then when I reciprocated, offering some morbid quip, her face fell. It was as if she was regurgitating memes about anxiety, aggregating zeitgeisty words and phrases about mental illness, because talking about anxiety on the internet is very of-the-moment right now, but she'd never been through it herself. It felt devastating, like I was led into a space I was made to believe was safe, only to be left alone, twisting in the wind. To her, anxiety was just something fun to joke about. But I thought we were having an open discussion about anxiety, with mutual admissions about how hard it is to survive with a hamster wheel spinning in your head.

That night, I was struck with a few harsh realizations. First, that people function as safe spaces—and not every person is safe. In the past few months, I've been trying to make more friends—which is a daring leap of faith for someone as anxious as me. Every first meeting with a person feels like I'm freefalling off a skyscraper, hoping for something, anything to grab on to. And if I do find something—some common ground, a shared experience—I can calm down a little, but it still feels like treading water, like I'm firing on all cylinders, doing everything I can to stay above water. Meeting new people is hard—it's two people diving into a situation with a silently agreed upon blind trust. For some people, like Macy, that makes it exciting, a new adventure. But I'm so perpetually uncomfortable that I want to just feel relaxed around friends—I hate the process of "getting to know someone," feeling like I have to be my best me around someone new. It's a lot of pressure, feeling like I'm not allowed to be anxious, which in turn makes me anxious.

Still, I thought that reaching out to new people, making new friends, and putting myself out there would be a good exercise for me. I only have a few friends that I feel truly safe with, and my anxiety tells me they're all going to die, so I need to have backups. If everyone I love dies or moves away because they realize I'm too much and they hate me, I need to have more people to keep around—simple anxious logic. So, I resolved to be more outgoing.

Now, I practice yoga—not as much as I should—but it's one of the only real sources of anxiety relief that works for me. Yoga teaches you to sit in uncomfortable situations—like, physically uncomfortable poses. The idea is that, if you can practice that skill, then you can carry that ability to live and breathe through a tough situation into the real world. So, for a while, I felt really good about my brave decision to give people a chance, to sit in my uncomfortableness. And I was doing a pretty good job. But to be honest, I only decided to hang out with these people because I figured that, based on their online presence or the brief time we'd spent together previously, that they were like me: anxious. This may sound silly, but finding out that they weren't felt like such a betrayal.

The other realization I had at that third dinner is: not everyone is like this, which is so unfair. I often sit and wonder about what my life would look like if I weren't persistently bogged down by anxiety, dread, and the looming threat of panic attacks—what would it be like to be like these three people? How free must they feel?

Everyone's brains are wired differently. I'm always asking mine to shut up (and then obsequiously obeying when it says, "No, squib"). I imagine that some brains are just wide open spaces, beautiful sprawling green fields and blue skies, brimming with endless opportunity. And that's so unfair. But both kinds of brains definitely exist.

I'd like to set a new goal for myself, and for other people who suffer from mental health issues: I want to learn how to set boundaries with people who make me feel unsafe, and to feel comfortable enforcing them when I need to. I'm not saying "avoid people who don't have mental health issues." But learn what kinds of situations you can be in with people who make you feel this way. Maybe it's in a group setting. Maybe it's at the movies, somewhere that doesn't require much talking. Maybe the boundary is just setting a hard out time for yourself—give this person exactly an hour of your time, even if it means lying about needing to be somewhere else at a certain time.

This week, I realized that people can function as safe spaces, and they can compromise those spaces just as easily. Don't let people who don't suffer from mental health issues gaslight you about your own—what you feel is valid and real and common. They're just as shocked to hear what it's like to live with generalized anxiety as I am to hear that there are people who don't feel like this every day.

Finding simpatico friendships and relationships can feel impossible. It's not, though it can feel like sifting through sand for a skipping stone. I promise that once you find these friends, navigating daily life feels much easier, insulated. We should keep choosing to sift—and not blame ourselves for getting rid of the grit in search of something smooth, something that feels right.

NEXT UP
Culture
6 Shows To Binge Once You've Finished 'The White Lotus'
Culture
The Cutest Couples At The 2023 Grammys
Fashion
Jenna Ortega Is The Face Of Adidas’ Newest Line
Fashion
Collina Strada & Vans Team Up For A Chiller-Friendly Collection
Style + Culture, delivered straight to your inbox.