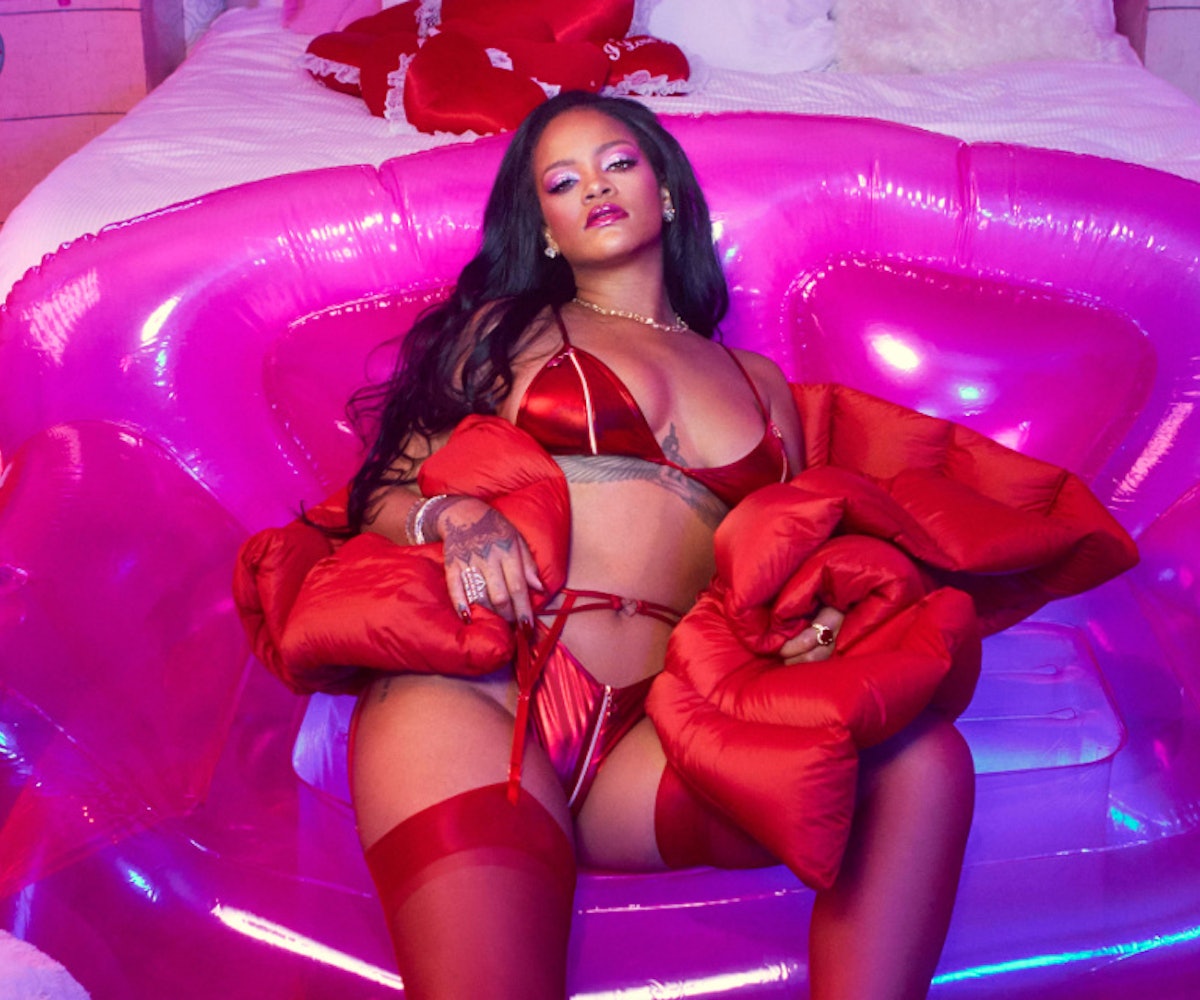 Rihanna's lingerie line is getting into the collab game. On Wednesday, Savage x Fenty announced its collaboration with Adam Selman, and the collection — filled with lace, shiny (faux) leather, coquettish cut-outs and zippers, and romantic details like hearts and bows — is perfect for your Valentine's Day plans.

Selman and Rihanna go way back. The designer's breakout moment was when he created a sheer, sparkly "naked dress" for her to accept the Fashion Icon award at the 2014 CFDA Awards. Fast-forward nearly six years later, and they're back together again creating undergarments instead of red carpet gowns. The idea came about when Selman ran into Rihanna at an event, where she told him (or rather, "she whispered in my ear," he tells NYLON) that she wanted to do a Savage x Fenty collaboration with him.

"A few days later, she texted me and told me she was serious, so I got to work right after that," says Selman. "Working with Rihanna always inspires me, and I always want to impress her with my work, so I dove into research and inspiration. We have worked together for so long that it just seemed natural, and then as time passed, it finally hit me that it was a full collaboration with Savage X Fenty."

Selman, who pivoted from ready-to-wear to activewear with the launch of Adam Selman Sport at the beginning of 2019, sees designing undergarments and sportswear going hand in hand. "Everything you put on your body should motivate you to do something, or feel something," he says. "It's all about showcasing the body, and at the same time empowering whoever is putting it on to really own it." Plus, Selman points out similarities in details between the types of garments: "Support and movement are two key ingredients to both. I can definitely see myself designing more lingerie in the future."

For Rihanna and Selman's debut collection, the two settled on a Valentine's Day theme: ruffles, frills, and '80s-inspired cuts. The pieces, which range from bodysuits, babydoll dresses, and bras to garter belts, underwear, and pasties, are priced between $30 and $84. The collaboration's campaign stars models Joan Smalls, Paloma Elsesser, Adesuwa Aighewi, Fiffany Luu, and, of course, RiRi herself, inside a bedroom that's straight out of the '80s (lava lamps, neon light-up telephones, and all).

Selman says his favorite items from the collection are the babydoll dresses and the "Locket Down" sets, featuring zipper details and heart-and-key charms. "They don't feel like 'traditional' lingerie, which excites me," he adds. Speaking of traditional, while this collaboration is traditionally meant to be worn in the bedroom, Selman thinks the cupless underwire bra would be "mega cute" over a tee and going out. "Wear these any place you want. No rules!" he exclaims. We totally agree.

See more photos of the campaign, below, and shop the entire collection on Savage x Fenty's website now.