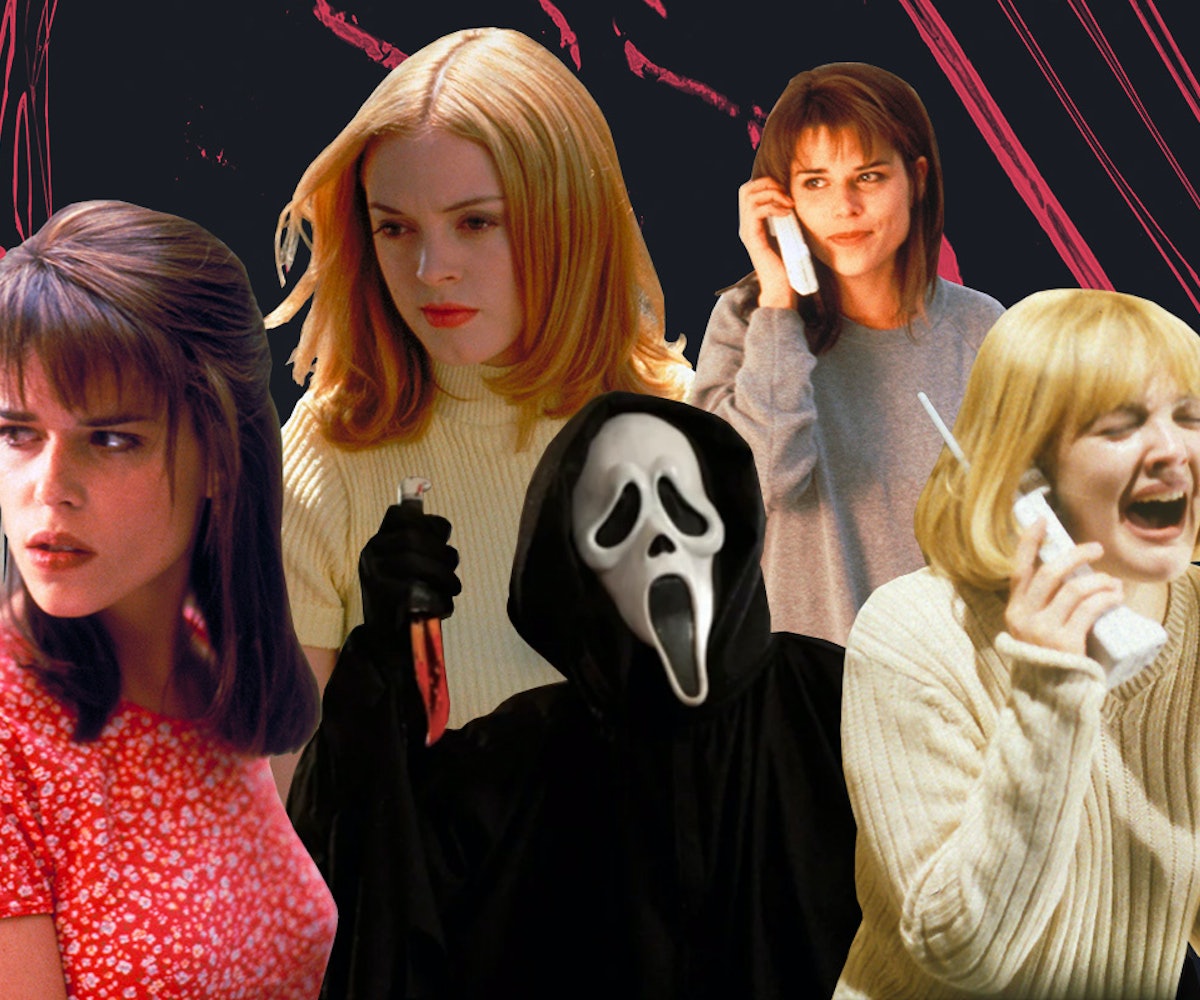 Wes Craven's Scream, the clever 1996 horror film that spawned a franchise and changed the landscape of the genre with its meta spin on slasher cliché, has been a Halloween go-to for over 20 years. While the film's postmodernism and place within the horror canon have been subjected to close scrutiny, its use of fashion is also deserving of analysis. The most recognized costume is, of course, the killer's ghostly white mask and black cloak. It's become a favorite Halloween costume, and is both simple and creepily effective. The mask isn't particularly fancy, which is the point — during the investigation of the murder, it's noted that the mask is "sold at every five-and-dime in the state." It's a costume someone could pass over for seeming too generic, and this generic quality is part of what makes it scary when deployed for bloodshed. The simplicity of it makes it easy to project all of your worst fears onto its synthetic material.

Drew Barrymore's one-scene appearance has also become costume fodder. Hanging out in a spotless kitchen, donning a neat blonde bob and cream-colored sweater, she looks the very picture of suburban innocence. The sleeves of her sweater are just long enough for her hands to recoil under in fear, and her entirely light-colored outfit seems skillfully created to show blood. The shock of her murder, the first of many in the film, is enhanced by the queasiness of dark red on white. A black sweater wouldn't have nearly the same impact.

Scream takes pleasure in poking fun at the good girl/bad girl tropes found throughout the history of horror film. The film's "final girl," Sidney Prescott (Neve Campbell), is introduced wearing a classic nightgown in a dainty floral pattern. Its slight dowdiness is shorthand for virginal innocence.

Sidney is meant to be somewhat prim. She's had a difficult life since the murder of her mother, and doesn't dress showily. At school, she wears a similarly conservative red floral T-shirt that's basically a daytime version of her nightgown.

She dresses for comfort. In an oversized gray sweatshirt, light-wash jeans, and sneakers, Sidney's the definition of inoffensive '90s casual fashion.

Sidney's friend, Tatum Riley (Rose McGowan), is her more daring foil, and ends up murdered. The horror movie convention that Scream pokes fun at dictates that a character like Tatum must be dressed in a more "slutty" outfit. Tatum clearly has more fun with fashion than Sidney does, as evidenced by her miniskirts, bright colors, and '90s-does-'60s white platform boots. When Sidney and Tatum are together, Tatum's outfits are the ones that stand out. Tatum is more colorful than the baggy-shirted bros that surround her, and her final outfit features a psychedelic skirt. She may end up a victim, but her wardrobe is bold and confident until the end.

While Sidney wears her dainty T-shirt, Tatum wears a crop top and bright red pants. Her pigtails and lollipop are cartoonish signifiers of innocence subverted by a feisty teen. Tatum doesn't just know that she's more adventurous than Sidney — her wardrobe shows that she revels in it. Her fashion is playful, and in Scream's world of self-aware horror, her bright, covetable final outfit is too showy to last. Tatum obviously doesn't deserve her premature end, but horror has often punished women who dress too revealingly, and the discrepancy in the two girls' costuming makes for a running commentary on this frustrating fact.

A shout-out also must be given to Tatum's cloud-print pajamas—a '90s staple easily procured at Limited Too or dELiA*s back in the day and now totally due for a comeback.

When it comes to '90s teen fashion, Scream has excellent credentials. The costume designer, Cynthia Bergstrom, went on to do Buffy the Vampire Slayer, a show that gave us too many iconic looks to count. The actresses further helped define onscreen style in the decade, with Campbell's goth swagger in Wild Things (1998) and McGowan's mean-girl pastel chic in Jawbreaker(1999). Scream's most enduring visual may be its masked killer, but its teen girl costuming, with winks at cliché, is just as potent.