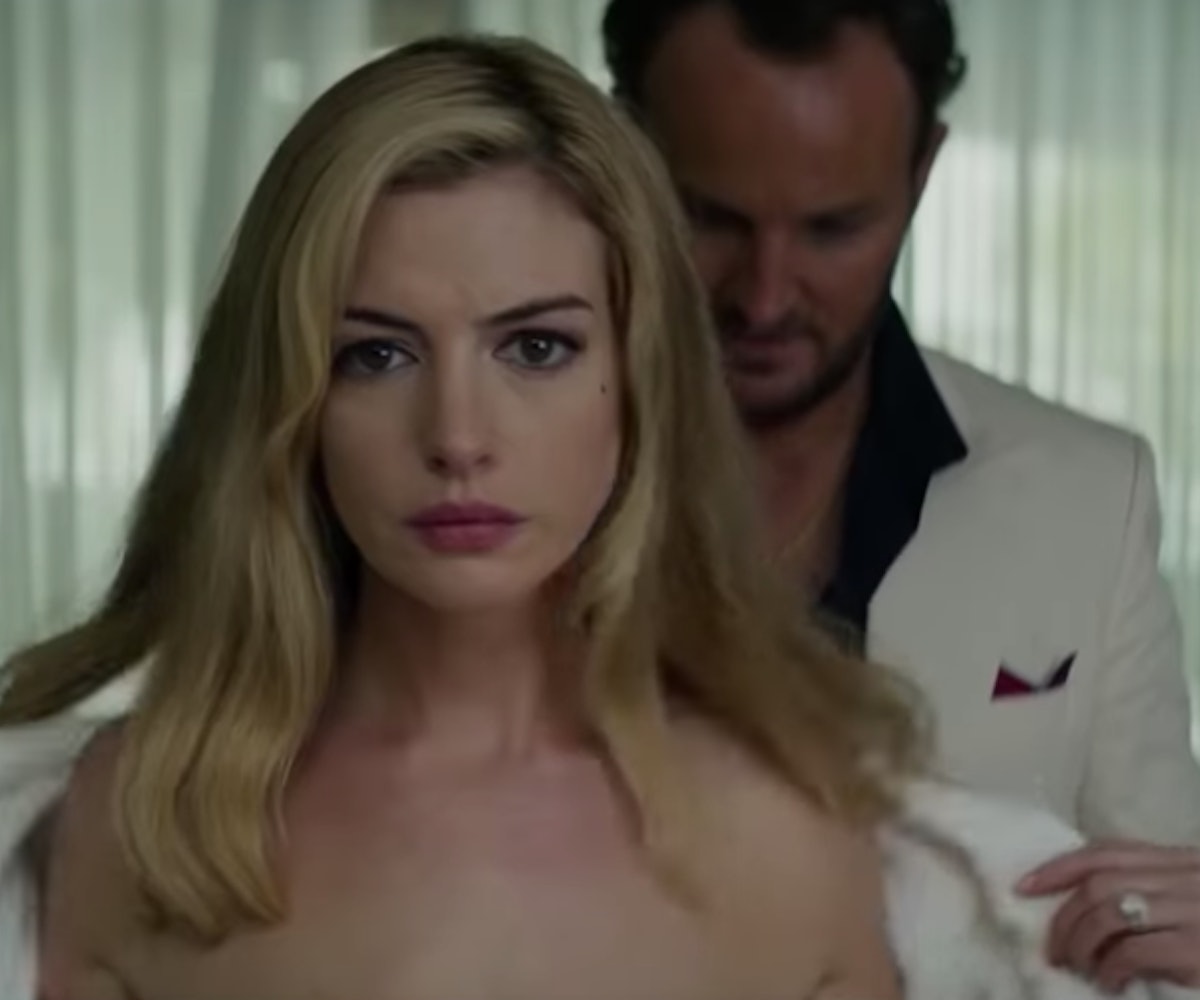 Let's get this out of the way first: Serenity, the new "tropical noir" film starring Matthew McConaughey and Anne Hathaway, is not a good movie. Just ask pretty much any critic; they uniformly hate it. Says Wesley Morris of The New York Times about the film's big plot twist: It has "a big reveal that's like the worst of Christopher Nolan, M. Night Shyamalan and the condolence-card section at Walgreens."

But even though Serenity is not a good movie, and is even maybe one of the worst movies, it is also a great movie, or, at least, it is definitely a great mid-January movie, a time when, as Morris also says, "studios leave their garbage on the curb." Because, of all the garbage being released this month, Serenity is the best garbage, the kind that leaves you laughing so hard you're gasping for air, the kind that gives you and the friend you saw it with tons of conversation fodder for once you've left the theater, the kind that will inspire you to describe its plot in glee-filled, minute detail to everyone you know to the point that you start to wonder if maybe Serenity is a good movie after all? (It's not. But that's what's so great.)

Anyway, this kind of joyful experience is what we need out of movies right now. It's January. It's cold. Maybe you're not drinking? This is a movie that—even when seen while totally sober—will make you think that maybe you've been dosed with something. And, besides what else are you going to see? Green Book? No! Bohemian Rhapsody? No! The Favourite for the fourthtime? Sure, maybe do that. But also, maybe go see Serenity, because while The Favourite has many scenes shot through the perspective of a fish-eye lens, Serenity has an actual fish: a giant tuna named... "Justice."

So about that fish. Let's talk plot! Here is where I warn you that there are major spoilers ahead, but also beg you not to let that deter you from reading because, like all great, bad movies, Serenity is impossible to spoil. I've seen it twice now, and my enjoyment was in no way lessened by knowing the major plot twist, which I will now reveal, after briefly setting up the plot, which is, honestly, unbelievable enough without the twist.

Here's what you think is happening when you start watching the movie: McConaughey is a man named Baker Dill who lives in a storage container set on a cliff on Plymouth, an island in the middle of nowhere that has a steady stream of tourists and, as we later learn though see no evidence of, a thriving underage sex industry. Baker Dill drinks out of a mug that says "World's Greatest Father" and is clearly unhappy and definitely lonely and sadly broke, so he has sex with a woman named Constance (Diane Lane) for money (not part of the sex-tourism industry). Baker Dill's job is taking tourists out on his boat to go deep sea fishing; on the boat, the tourists are allowed to drink beer, not hard liquor (this is emphasized more than once, so maybe it was important? I don't really know). What the tourists are not allowed to do is catch the big tuna that Baker Dill wants to catch for himself: "Justice." Why is it called "Justice"? For reasons.

One night, Baker Dill is approached by a mysterious blonde woman dressed all in white. It's Anne Hathaway, and her name is Karen (Karen!). It turns out, she knew Baker Dill in high school, and he is not on Facebook, and so it was hard to find him. Also, Baker Dill is not his real name, and the reason he chose it as a pseudonym is because of a favorite high school teacher. I mean, okay. Also, no. Also, I will still call him Baker Dill.

Anyway, Karen has gone through the trouble of seeking out Baker Dill because she is being beaten by her abusive husband, Frank, a man whom Baker Dill knew was trouble all along. Karen can't divorce Frank because he works in the "construction industry," and we've all seen The Sopranos, so we know what that means: Frank will kill Karen if she tries to leave him. So, instead, Karen wants Baker Dill to take her husband out on a fishing trip and kill him. Why should Baker Dill do this? Because he'll get 10 million dollars, and also because it will mean the son he shares with Karen won't be subjected to that kind of abuse anymore. At least the mystery of the "World's Greatest Dad" mug has been explained, although it is a little sad to think of Baker Dill buying it for himself, since he can't really think he's so great, can he? Like, what great dad never sees his son?

Meanwhile: Other stuff is happening. Like: A squirrelly accountant-looking guy is chasing Baker Dill around the island and always just barely missing him. And also: We see what would appear to be Karen and Baker Dill's son in his home back in Miami, where he is furiously coding a video game that appears to be centered around deep sea fishing; in the background are fighting noises, you can hear Frank hitting Karen. Then too: There's a cat, and people warning Baker Dill about messing up "the rules," and Karen calls Baker Dill "Daddy" while they're having sex, and Frank arrives and makes Karen strip down so he can beat her with his belt, and it rains, and there's a broken hand, and Google Maps doesn't exist, and things are definitely weird, but you're not entirely sure why they're weird, until you are.

Things are weird, you realize, because none of this is real. It's all a video game that's been coded by Baker Dill and Karen's kid, Patrick, who invented a video game both to help him deal with his abusive stepfather and also to work up the nerve to kill him. Which, Patrick does. He kills Frank, and he gets arrested, and we find out via news footage that, though Patrick was taken in by the police, they determined that he killed Frank in an act of self-defense, and so have released him into the care of his mother, Karen. Oh, also: We find out the real Baker Dill died in Iraq.

Do you need a moment to process all that? Take it. Because, honestly, there's a lot to process. Oh, not the twist, exactly. The twist is the most easily processed thing, not least because it is pretty predictable within about 20 minutes of the movie starting. No, what's so hard to process is the realization that, since the entire thing is a creation of Patrick, who has generated this virtual world as a way to stop his abusive stepfather from hurting him and his mother anymore, and has thus used his dead father as an avatar for himself out of a mixture of hero worship and disassociation, then why did this teenage boy need to include the following things in his made-up world:

These are the things I don't understand about Serenity. These are the things I will never understand about Serenity (well, these and also the atrociously corny camerawork and editing and dialogue and everything else), but just because I don't understand them, it doesn't mean that I didn't enjoy my experience(s) seeing the movie. And, besides, like Hathaway said in her defense of the film: "There is no failure, only learned events, not everyone has to like everything, and the critical response doesn't change my feelings about the movie." Alright, alright, alright.