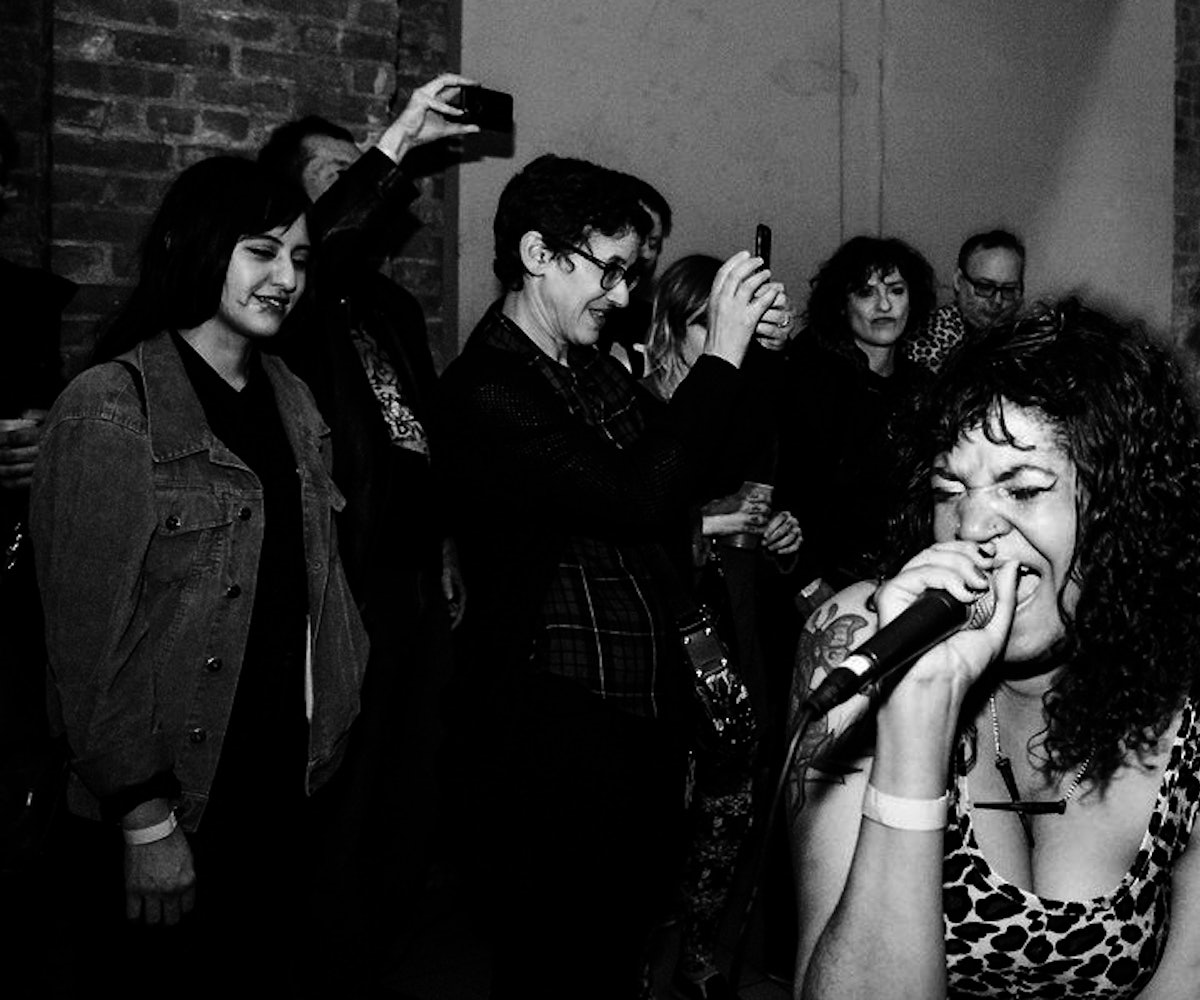 It seems like New York's most storied artists are all characterized by distinct sounds that can be teased apart and traced to myriad local influences, or else placed among the unrelenting noise and overstimulation that comes with the territory. The city just has a way of embedding itself in your consciousness like that. Brooklyn punk band SIGNAL are a very contemporary example of this pastiche effect; their debut self-titled EP consists of what sounds upon first listen like organized chaos but has been refined into five ultra-compact tracks.

The band's four members came together a year and a half ago, each bringing their own backgrounds and tastes to the table. "This is a really weird project in the sense that we never came in like, 'Let's write a song today,'" says bassist Beck Kitsis. "We more kind of came in and just started playing our instruments and trusted that each of us could bring enough to the table."

With each member drawing from their own experiences with different subcategories under the general umbrella of punk, their collaborative dynamic hit a sweet spot. "[Our songs] kind of have this weird thing where sometimes, if you isolate the instruments, they don't really sound like they're interacting with each other, but then they kind of do," says Kitsis. "They come together to build this collage of different sounds."

Each member's sensibilities are explicable in their contributions to the EP, from guitarist Carlos Salas' crashing, angular riffs to Aida Riddle's grrrl punk-tinged vocals. "We can fluidly be influenced by one another and what we're playing at the time," says Salas. "Things come together from that, which is really cool, because I've never been in a band that's written that way before."

The band caught the eye of Trip Warner of Wharf Cat Records after they played a show at Trans-Pecos in Brooklyn, and he invited them to record with him for free. Faced with an impending hiatus due to drummer Allie Brasch's eight-month departure for school in Indiana approaching, the band made quick work of laying down their first track, and ended up cranking out five songs within a month. "They each have a very particular sound," says Salas. "They're almost like five different experiments." The end result is a brash, succinct EP that neither overstays its welcome nor takes itself too seriously.

"BLL," for instance, derives its name from Bud Light Lime, an apparent non sequitur with regards to the vaguely existential content of the song. "They have the dumbest names ever," sighs Kitsis, "We all love Bud Light Lime." The video for "BLL" is a 90-second visual onslaught, packed with archival footage from soap operas and horror movies as well as flashing graphics. "We had a couple of people who'd never heard us listen to this song and write as they listened, so it wasn't necessarily the lyrics that are flashing at the bottom, but it's their immediate initial listen of the song," explains Riddle. "I thought it was funnier than actually writing the lyrics as closed captions."

"It became a parody of the song itself, because it's not even the real lyrics," adds Kitsis.

Riddle and Kitsis, who directed the video, drew inspiration from a segment on TV Party, Chris Stein and Glenn O'Brien's public access show from the late '70s, featuring the artist Jean-Michel Basquiat writing stream-of-consciousness words across the screen. "There were a lot of errors in what he was writing, but I thought it was really cool and organic," says Riddle.

The no-wave reference point is a touchstone among the canon of New York punk, a lineage upheld by acts like SIGNAL. "It means a lot to me to put New York into our music," says Riddle, a native, "I think it's a really weird city with a lot going on, and I feel like there's so much to draw from creatively." While there are certainly plenty of bands from New York, the categorization of being a "New York band" is one that Salas, a transplant of three years, considers an honor. "What's exciting to me is that something about the energy in the city has gotten into the art that we're creating. It's like transformative energy, and I think it's really cool that that's picked up on by people."

The tedium inherent to the hustle and bustle of the city has also played a part in informing the band's irreverence; despite the intensity of the music, there's a healthy dose of playfulness to take the edge off, particularly in Riddle's lyricism and delivery. "I think that in writing lyrics, especially, I'm often just trying to make fun of what I'm feeling so that it feels less dramatic in my head," says Riddle. "I think that's like another New York thing, too," says Salas. "Life here is so grueling that you kind of have to find the humor in the grind that you're going through."

Kitsis uses film as an example: "You can't ever have a movie that's 100 percent all drama, or all horror, because then you completely fatigue the viewer," she says. "They can't take it. If everything was heavy all the time, it's just not representative of what life is like. Life is bizarre and absurd."

Watch the new video for "BLL," below.

NEXT UP
Entertainment
Larsen Thompson Embraces Imperfection On Debut Single "Roots"
Culture
Kareem Rahma Survives A Dinner Party From Hell In “Really Rich Parents” Video
Entertainment
Hawa Has Her D'Angelo Moment In Playful "Actually" Video
Entertainment
Chloe's "Pray It Away" & 9 Other New Songs Out This Week
Style + Culture, delivered straight to your inbox.