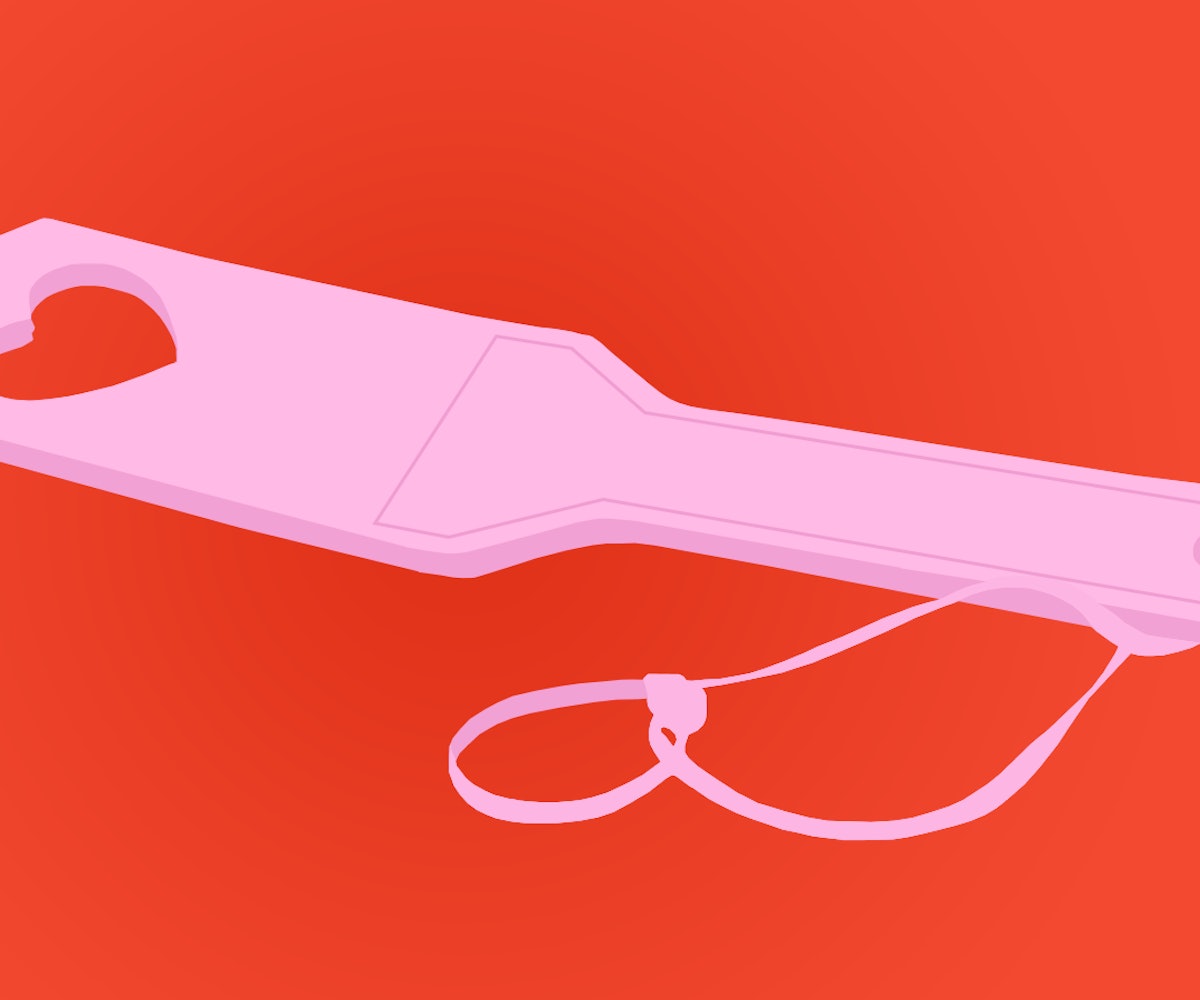 We all build narratives around the sex we're having, the sex we want to have, and the sex we'd never have in a million years. These stories can give us a way to think about and construct ourselves, but they can also be suffocating.

"One of the most powerful things is the story that a person tells about the sex that they're having, who they're having it with, why they're having it, what it does for them, and what they want it to do for them," says Lilah Aslan*, a sexuality researcher. "I think there's a cultural need to ask anyone outside of the standard U.S. cultural sexual script to account for themselves... You have to come up with language the rest of us understand and then attach it to yourself, which is pretty unrealistic."

In other words, with something as complicated as sexuality, people yearn for definition, groups within which they can identify themselves. But, obviously, not every aspect of sexuality fits into a tidy category. Take spanking, for example.

"The people in my research seemed to have attached some pretty powerful stories to the significance of what it means to engage in spanking," says Aslan. "Folks would look in and say, 'Oh that looks like playing with power' or, 'That looks like playing with kink, and anyone who says it's not is just fooling themselves.' I think that's an obvious tact that people try to take to tell people who they are and what their identity should be."

Often it's hard to separate a sex act from all the cultural ideas around that sex act. And often we assume that someone's actions compose their identity, when the reality is more complex. But when it comes down to it, no one else should tell you who you are and how you should identify.

"Regardless of sexual fantasies or desires, people in general can benefit from critically examining social narratives because oftentimes those narratives are so deeply internalized that people don't realize it's not their own original thought process. Doing some introspection around where values and beliefs come from as they relate to sexuality—and gender, and relationship structure, etc.—can be beneficial in terms of getting to know oneself, working toward self-actualization, having more intimate and satisfying relationships and better sex, among other things," says Dulcinea Pitagora, a psychotherapist and sex therapist based in Manhattan.

If you've decided that you want to change your own narrative about how spanking fits into your sex life, you can. Besides, forget everything else: The best reason to add spanking to your sex life is because you want to. Spanking is fun! If you're excited about it.

"Blood flow is certainly a part of that sensation, given that it increases warmth and sensitivity to the skin. And it's also about proximity, in that when there is increased blood flow to the ass, that blood flow around genitalia is increasing as well," Pitagora says.

To get into position, the spanker can sit on a bed or couch, with the spankee across their lap. The spankee can kneel on the bed on their hands and knees, or on their knees with their arms stretched forward and their head touching the bed, with the spanker standing or kneeling beside them. "For people who are avid yoga practicers, downward dog is also a solid spankee position," says Pitagora. Depending on your bodies and your furniture, you can also experiment with the spankee bending over the arm of a couch or the edge of the table; with the spankee standing with their feet slightly wider than shoulder-width apart, bending slightly at the hips, and gripping a counter, railing, windowsill, or doorframe; or with pillows under the spankee's hips to help with positioning. But the most important thing is that you're comfortable. "If either partner feels awkward or uncomfortable, it will be distracting and much less sexy."

Then start slowly with warm-up spanks that are almost like light taps all over your partner's ass until their skin is lightly flushed or they ask for harder spanks. The best places to aim for are the fleshiest areas of the ass: the roundest part of the cheeks and just below the cheeks at the tops of the thighs are easy targets. Make sure to avoid the tailbone, at the very bottom of the spine, and the kidneys, approximately above the upper ass cheeks. Resting your non-spanking hand at about the top of your partner's ass crack can both help you avoid and protect their tailbone and also help you feel connected.

If you've never spanked or been spanked before, or played with anything similar, it might seem weird to start. It's totally normal to feel silly or in your head—just make sure to check in with yourself and verbally check in with your partner. Laugh if you need to.

"Sometimes laughing can provide a release that breaks tension and allows for further exploration. If it becomes difficult for someone to stay present and have fun, it's often because they're wondering what their partner is thinking or feeling," says Pitagora. "The best way to find out is to ask: 'Are you enjoying this? Is there something else you'd like me to do?' Likewise, it can be helpful to communicate to your partner what you're enjoying, and what else you'd like to do."

* Lilah Aslan is a pseudonym.