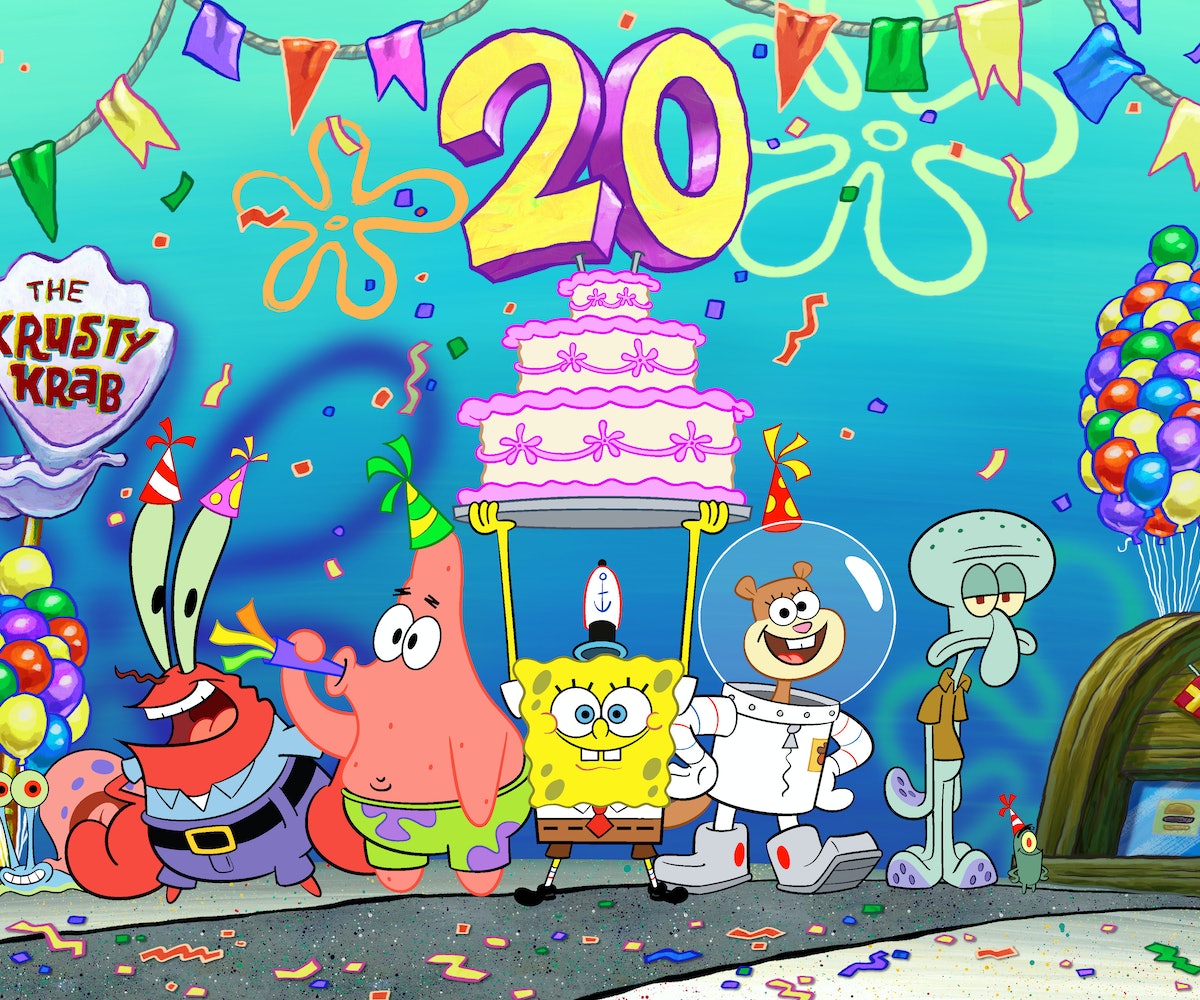 Today marks 20 years since Nickelodeon introduced the world to what would become the most famous sponge ever. After the network showed a preview of SpongeBob SquarePants following the 1999 Kids Choice Awards, it created a pop culture phenomenon that is still rolling today.

To paraphrase Maya Angelou, people will forget what you said and what you did, but they will never forget how you make them feel. For 20 years, SpongeBobSquarePants has helped us experience wonder, hilarity, friendship, and even loss through animated lenses that took us under the deep blue sea. SpongeBob has been a uniter of different communities and generations in the two decades since his introduction—and, in part, his longevity is all thanks to GIFs, which you can enjoy even if you've never seen the show.

In honor of SpongeBob's 20th anniversary, let's revisit the moments from the show that have led to the absolute best viral content.

Squidward finds Spongebob's work diary and discovers that Spongebob acts like a chicken whenever he sees plaid. When Mr. Krabs shows up in a plaid kilt, Squidward points it out to SpongeBob, knowing he'll make a fool of himself… and he does.

Spongebob decides he wants to quit his job and live off the land, among the jellyfish. Patrick wants him to come back and chases him through a field. SpongeBob is tired AF from running around naked.

In this GIF, the rainbow is often overlaid with words like "NOPE" or "DON'T CARE" to intensify their effects. This is actually from one of my favorite episodes of SpongeBob SquarePants, when Patrick and SpongeBob are having the time of their lives in an empty box. Squidward can't figure out where the realistic noises are coming from, and Spongebob insists that they're the result of strong "imaginaaaation."

Usually used to describe the impending arrival of either sex or money, SpongeBob's smile here is a mixture of "I told you so" and "I'm so happy for you." It's also the moment he was able to convince Squidward that Krabby Patties are pretty tasty.

There isn't actually a scene where Mr. Krabs' world starts spinning around him. That part of the GIF has been edited. However, the image is from "Patty Hype," an episode in which the Krusty Krab loses customers and money. If you know anything about Mr. Krabs, you know he hates that.

Up to no good? This is the GIF for you. Ironically, this is Patrick's face after capturing SpongeBob and preparing to force him back into civilization and their friendship.

Season 7, Episode 18a "That Sinking Feeling"

I know this is technically not a GIF, but it gets an honorable mention for being the best example of FOMO ever. In this episode, Squidward is hate-watching SpongeBob and Patrick play in his front yard. We've all been there.