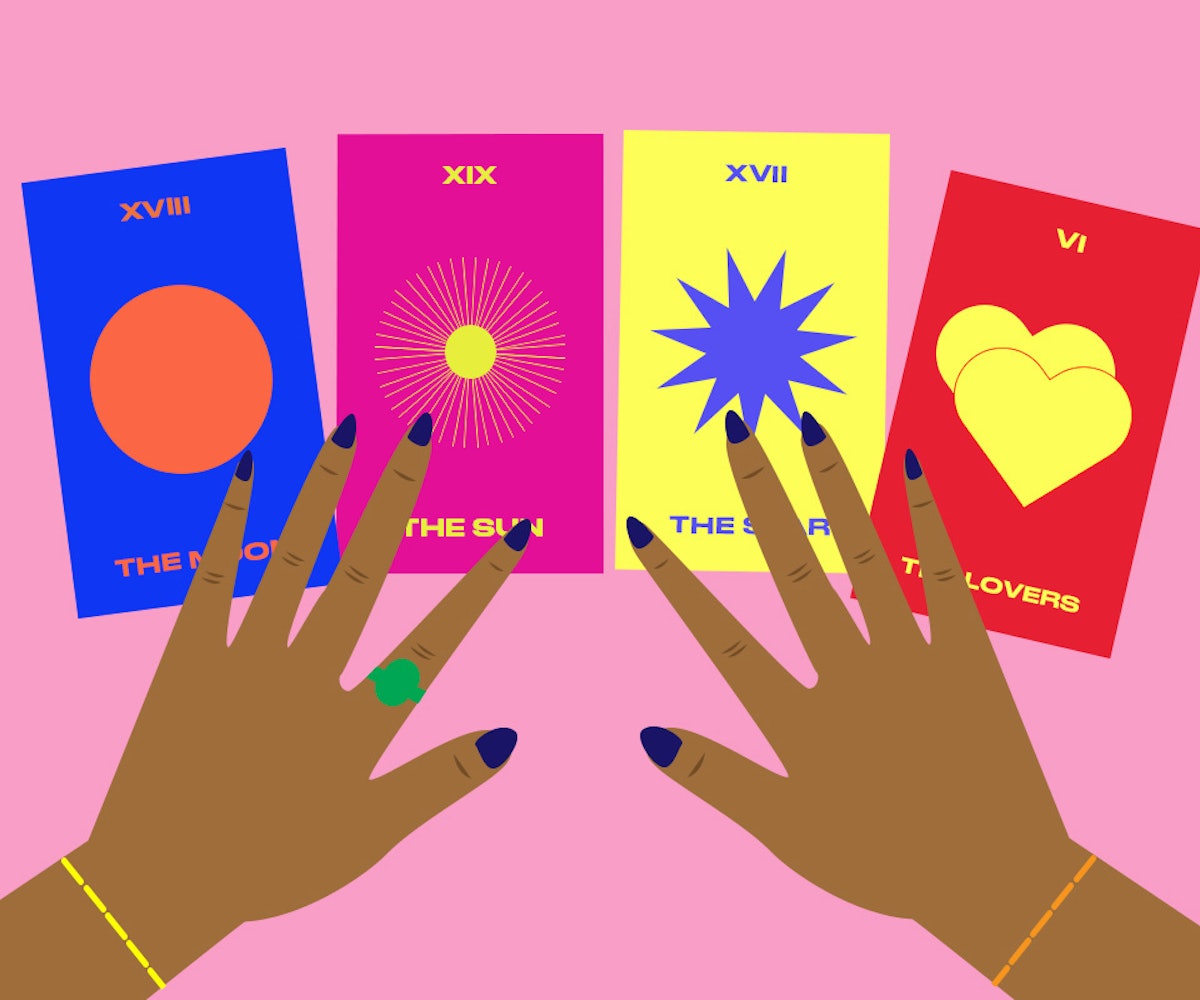 When I first ordered a tarot deck, I didn't tell anyone. Tarot became a solitary practice for me, a curiosity, something I was exploring for reasons about which I wasn't entirely clear. It was something I did alone during the dark nights of the soul—which, more often than not, were actually most acute at three in the afternoon on a Wednesday. I would pull cards on the white Crate & Barrel desk I found on Craigslist, in the small bedroom of the small apartment I shared with a few gay men in the wake of my divorce. I didn't go out in the common areas; I stayed in my room. I cried, and I drank, and I read tarot, and I didn't talk about it.

It wasn't precisely that I was ashamed of reading cards. I didn't feel shame; I just didn't want to subject myself to others' judgments. I was too raw from all the leaving I had done recently: leaving a marriage, leaving an identity and coming out. The tarot cards felt uncomfortable and new—my hands had to learn how to shuffle a deck twice the size of typical playing cards—but, everything about my life felt uncomfortable and new.

I wasn't sure what I wanted out of tarot. Before getting my own deck, I'd impulsively had an in-person reading in downtown Boston, in an office with tacky green carpet and 1970s decor. I'd wanted to see if a psychic could speed up this whole healing business that was taking so damn long. She couldn't, it turned out, but her cards intrigued me: They hinted at the prospect of working with imagery to understand my own thoughts, my own curiosity, my own interiority.

So, I was teaching myself to read tarot, in order to read myself. I didn't tell anyone about it, though. I wasn't ready to open myself up to the criticism I thought automatically came with anything associated with the occult: You believe in that? Seriously? It was easier, I thought, to practice alone.

It is a strange thing, to feel blissfully free and so desperately alone.

Can I pray for you?

Church-going and Bible-reading are important for Christians, and they were vital parts of my life for 25 years. But for me, the cornerstone of my faith, and what most connected me to others, was prayer. Prayer was a daily part of my life, a direct line to God. But it was also a way of connecting with those closest to me. "Can I pray for you?" is a simple exchange between friends, or even strangers who've shared an intimate moment before the Divine.

I would walk and talk with my best friends, most of whom were also believers, on the way to class in undergrad, and some days, we would stop right there in the middle of campus, streams of students walking all around us, to pray for each other over something one of us needed that day. Praying for each other was as easy as breathing, as intimate and natural a thing to do for each other as hug hello or goodbye.

Pain connects us more quickly than almost anything else, and praying for someone is a way of sitting with them in their pain while still accessing a feeling of action, of doing something. It is a powerful thing, to speak the same spiritual language as your closest friends, to have an immediate, intimate way to sit with each other in the deepest dark. To pray for someone is to show care, to put in time, to offer someone consistent energy on their behalf—spending your time with God talking about them. Whether you are asking for their healing, for their comfort, or for their purpose to be revealed, to pray for someone else's need or want or grief when in their presence is the ultimate act of emotional and spiritual intimacy. It establishes a unique kind of trust.

When I came out and left the church, I lost many of those faith-based friendships, which means I also lost that shared language, those shared prayers, that spiritual foundation. My best friend, who had been my maid of honor, told me, "I think you're making a mistake." In that moment, she did not ask, "Can I pray for you?" She rejected spiritual intimacy with me, rejected any attempt at being close to me. I was too far gone.

The time for prayer had passed.

I never thought I would find my spiritual family again, never imagined that spiritual connection with people outside of organized religion was possible. I didn't grow up with models for it, and depictions of the occult in pop culture (The Craft, for example) often show less than healthy group dynamics.

This was the cost of walking away, I figured. There are consequences you have to live with for some choices in life, even healthy choices. Giving up on the prospect of any spiritual community was one of them.

Eventually, though, my comfort in my new life settled, as did the cards in my hand. Eventually, I started casually mentioning my tarot and journaling practice to close friends, who asked me questions, wanted to hear about it, wanted to know why and how and, also, could I read for them, maybe? Sometimes—to my great surprise—my friends even read cards themselves. They just didn't share their practice, either. We were in graduate school; we were supposed to be rational, reasonable, objective. "I mean, I don't believe in it," one of my friends maintained, even as she gave me sharp, incisive readings with her Rider-Waite-Smith deck in the tiny apartment she shared with her wife.

Slowly, emboldened by community, I started to read—and even volunteer to read—for others. Not just in their apartments. In public, even. I read for friends over dinner at The Independent in Union Square or at Diesel in Davis. By the time I moved to New York from Massachusetts, when I was accruing even more friends—tarot readers, astrologers—who were openly into the occult, I was reading in coffee shops and breweries and wine bars, pulling my tarot deck out of my purse with the casualness that others pulled out a wallet to pay the bill.

And my tarot reading friends did, too. We read cards for each other about relationships, crushes, people with whom we were breaking up; about new career choices and our books; about coming out to different people in our lives. But these petitions were not about seeking the will of God to reveal the direction for our lives; every conversation circled back to how we ourselves were in charge of our own lives, our own desire. Our tarot practice affirmed our own and each others' agency. "You know what the cards are telling you," a friend might say. "You already know what you need to do. You just need to fucking do it."

These days, I'm extremely out, as it were, about reading tarot. It's my party trick for parties and picnics, but it's also more than that. I've brought my cards to company retreats at an old startup I worked for, reading for groups of mostly cishet men and introducing them to the collaborative power of the unknown ("holy shit, you were right" more than one of them exclaimed in the weeks after), and upstate to a winter retreat with all-women, mostly queer writing group, where all of us were familiar with tarot but took joy in pulling cards and reading for each other over wine at the end of long creative days.

Today, when friends share a difficult thing happening in their lives and I know (or suspect) they might be receptive, one of the first questions I ask is: "Can I pull a card for you?" Not because I think the cards have the answer, exactly. But because the cards open up an opportunity for more dialogue, for more questions, but also for intimacy, for connection—for relationship building. And, at the end of the day, they offer those I love the comfort of knowing that I'm here to support them, however I can. Much like I used to do with prayer, all those years ago.

One of my favorite tarot readers, who has become a mentor, comes to New York at least once a year, and we always have a small group dinner together with other tarot readers, astrologers, and occultists. At the end, she pulls a tiny tarot deck (literally: the cards are not even 2"x2") out of her purse, and everyone pulls a little "tarot mint" as an end of meal dessert, a closing ritual. We all read for each other, saying what we see in the cards.

The cards create a spiritual community, offering us the chance to deeply connect to each other and participate in each others' lives. Collaboration, agency; finding support in each other and, more vitally, our own strength. At the end of the day, it's more than just a prayer, it's a symbol of our devotion to each other.