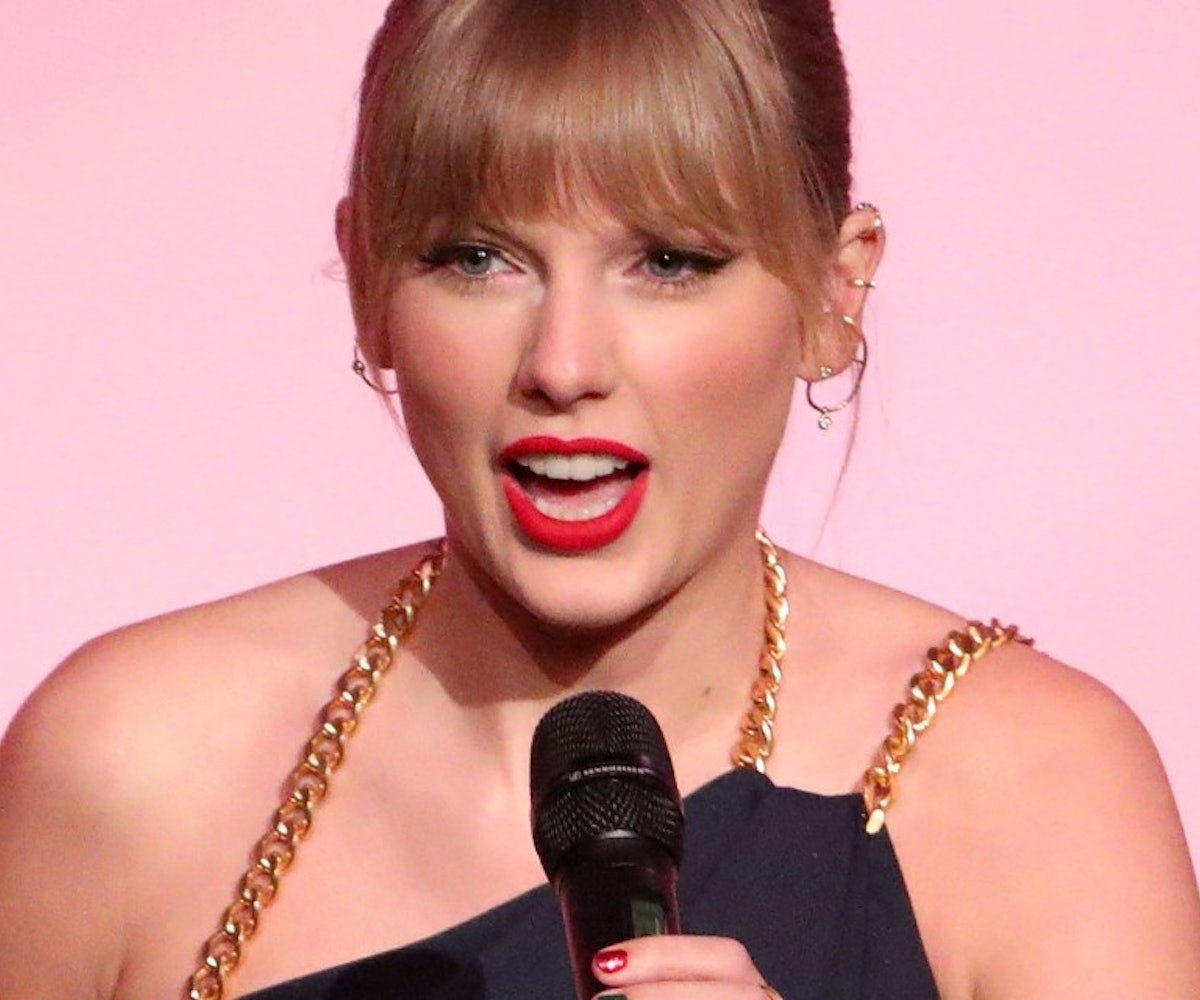 Taylor Swift called out Scooter Braun, private equity, and "toxic male privilege" in the music industry in an extensive 15-minute speech at Billboard's Thursday evening Women In Music 2019 event, where she was honored as the publication's Woman of the Decade.

During her speech, Swift recounted her rise from a 16-year-old country musician to her eventual pop dominance, describing the past decade as one in which she served "as a mirror for my detractors: whatever they said I couldn't do is exactly what I did." She also spoke on the unequal criticism she's observed women artists receive over male artists, and listed several other women artists— including Billie Eilish, Normani, Megan Thee Stallion, Camila Cabello, and Lana Del Rey — that have triumphed anyway by continuing to focus on their art. She additionally stressed that the fight for more women behind the scenes in the industry is paramount, saying "these women are still struggling to even have chance to be in the room."

Towards the end of the speech, Swift turned her discussion to Scooter Braun and his June 2019 purchase of the Big Machine label, a deal that included Swift's entire catalogue at the label, and all the master recordings of her first six albums. She cites the deal — which she claims was funded by left-wing billionaire Soros family, 23 Capital, and the Carlyle group — as an example of the "unregulated world of private equity, coming in and buying up our music as if it's real estate." Tied to the issue, she goes on to call out the "toxic male privilege" in the music industry by saying: "And I'll say the definition of the 'toxic male privilege' in our industry is people saying, 'but he's always been nice to me.' When I'm raising valid concerns about artists and their rights to own their music. And of course he's nice to you. If you're in this room, you have something he needs."

Swift has been vocal about Braun's acquisition of Big Machine ever since it was announced in June, initially writing a Tumblr letter the day of the deal's announcement, which lead to response statements from Braun and Big Machine founder and CEO, Scott Borchetta. Later, in an August CBS interview, Swift stated that she intends to re-record all of her old albums to circumvent Braun's purchase of her masters. In November, Swift posted an update about the situation, claiming Borchetta and Braun were preventing her from performing her old hits on television — though soon after, Big Machine reportedly gave her the green light to perform her songs at the 2019 American Music Awards.

Swift's full quote on Braun and private equity is printed below.

"Lately there's been a new shift that has affected me personally, and that I feel is a potentially harmful force in our industry. And as your resident loud person, I feel the need to bring it up. And that is the unregulated world of private equity, coming in and buying up our music as if its real estate. As if it's an app, or a shoeline. This just happened to me without my approval, consultation or consent. After I was denied the chance to purchase my music outright, my entire catalog was sold to Scooter Braun's Ithaca Holdings, in a deal that I'm told was funded by the Soros family, 23 Capital, and the Carlyle group. Yet to this day, none of these investors have bothered to contact me or my team directly to perform their due diligence on their investment. On their investment in me, to ask how I might feel about the new owner of my art. The music I wrote, the videos I created, photos of me, my handwriting, my album designs.

And of course, Scooter never contacted me or my team to discuss it prior to the sale or even when it was announced. I'm fairly certain he knew exactly how I would feel about it though.

And I'll say the definition of the 'toxic male privilege' in our industry is people saying, "But he's always been nice to me," when I'm raising valid concerns about artists and their rights to own their music. And of course he's nice to you. If you're in this room, you have something he needs. The fact is that private equity is what enabled this man to think, according to his own social media post, that he could buy me. But I'm obviously not going willingly."

NEXT UP
Culture
Senators Quoted Taylor Swift During Ticketmaster’s Hearing
Entertainment
19 Niche Music Festivals For Every Type Of Person
Entertainment
Boygenius, LCD Soundsystem & Steve Lacy Are Headlining A Summer Concert Series
Entertainment
Chloe's "Pray It Away" & 9 Other New Songs Out This Week
Style + Culture, delivered straight to your inbox.