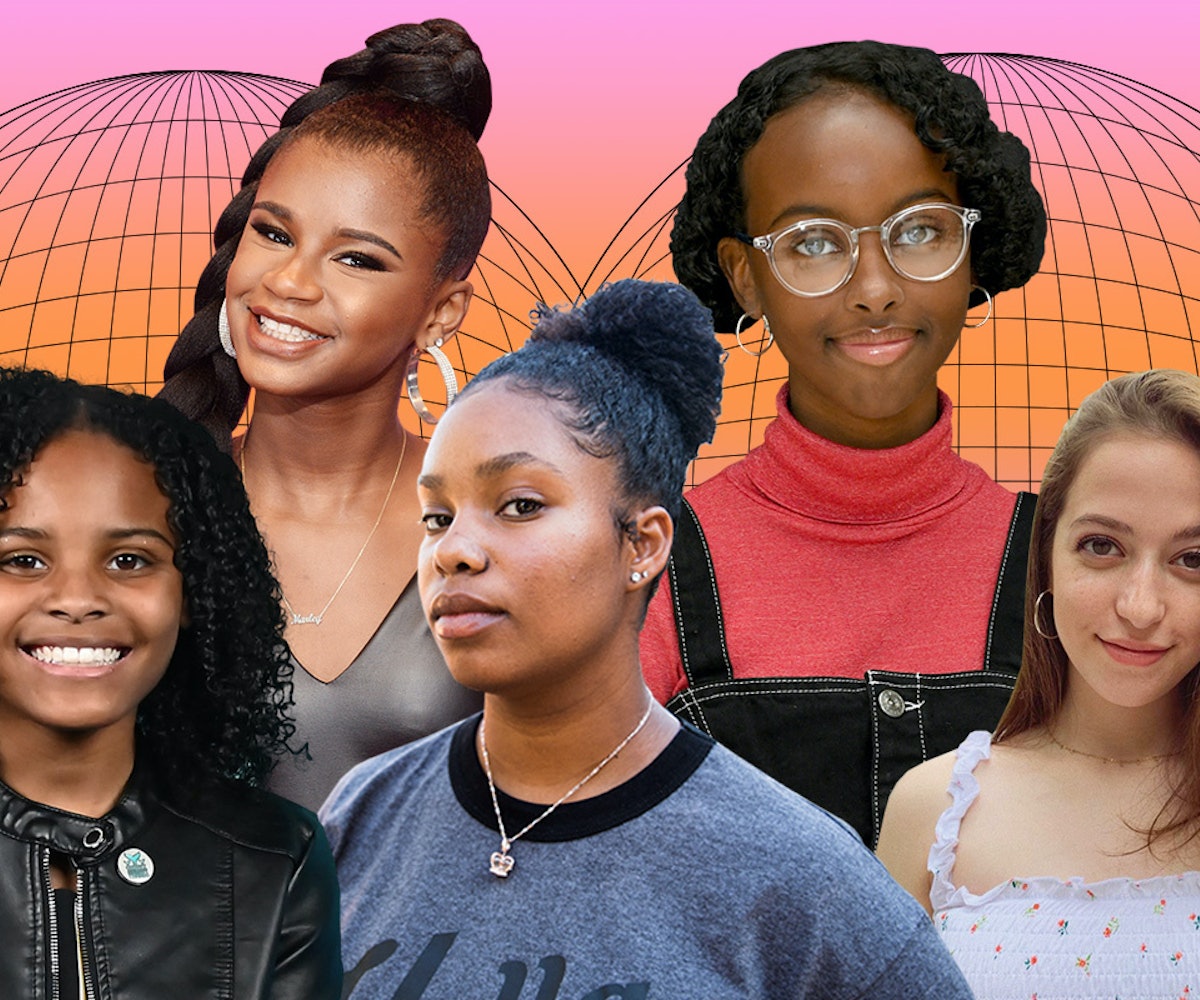 Teenagers are saving the world — and in 2019, this is not an exaggeration or a hyperbolic catchphrase. Simply, it's the truth: young people are leading the movement in gun reform, climate change, mental health, and other serious issues that are affecting the world every single day. In September, 16-year-old climate change activist Greta Thunberg gave a powerful speech at the UN Climate Action Summit, during which she now famously declared, "This is all wrong. I shouldn't be up here. I should be back in school on the other side of the ocean. Yet you all come to us young people for hope. How dare you. You have stolen my dreams and my childhood with your empty words."

Her words, while chilling, are also completely true; in our reliance on teenagers for change, we've glossed over the ultimate sacrifice these activists have made — namely, their childhood. Because even in the face of mobilizing their peers or changing policy, these young adults are also still juggling the ups-and-downs of growing up. Here, NYLON talks to five teen activists about how leading movements has shaped their upbringing and what they see for the future.

Do you think teenagers should be responsible for leading movements of change?

No. It is our responsibility to go to school, do our homework, keep our chores done, and worry about sports and other hobbies. But the fact is, we are being directly affected by so many live-altering issues that, if we don't step up and take the lead now, we may not get a future where we do get to grow up.

You've brought a massive amount of attention to the water crisis in Flint, Michigan. What made you want to join the activism space?

My community is still very much in crisis, and every day I learn of other communities dealing with the same issues. I want to be able to look back and say, "Yes, I did my part to fix this." Being an activist has given me a chance to have friends from all around the world. I love being able to support other activists and to keep on speaking up on issues that matter the most to me. We are all one big family. I could never just walk away from that.

What are some words that you'd like to share with our government officials, policymakers, and industry leaders?

Stop acting like you support us when you know that you are going to keep supporting policies that hurt us and put our lives and futures in danger. Start listening to us and make sure that the laws and policies you pass actually prove that you are listening. Stop using us kids as photo props because we are fed up with the empty promises and lack of urgency to support us.

Why do you think young people are leading these movements?

I do think there are certain issues that impact young people the most and we should be at the forefront of those movements, but I don't think we should be responsible for them. I shouldn't automatically be expected to lead because it's not our fault most climate issues exist. The fact that young people have to succeed in making change is a problem because older generations should've already been doing that for us.

What made you want to get involved in the activism space at such a young age?

Activism has always been part of my life. I grew up in a pretty political family and started going to protest as young as six years old. I grew up in an age where activism was socially accepted and even encouraged. I myself started organizing around middle school and high school age, and that just led me to where I am. There were so many things happening in my community, that were impacting people that I knew, I had to do something about it. It seemed like a life or death situation.

What is the most meaningful part of leading a movement?

Being able to inspire people, but also knowing I have the ability to change the narrative around activism. I know my own existence is a form of resistance. Having someone who looks like me — a Black Muslim — talking about climate crisis is something very necessary for real change. I know I'm creating more space for people like me.

Why do you think we look to teenagers for guidance?

I think the reason why we look at my generation for guidance is because we have a new interpretation of the experiences we're going through today. Even though we're young, kids my age should still have a place at the table. We deserve to talk about our own feelings and how we can work together with adults so that we can create spaces that benefit every generation.

What is the most rewarding part of creating #1000BlackGirls?

Being able to see the changes in curriculum and how teachers are now a lot more aware of the choices they're making and how they're affecting students. It's these little changes where I know there are now kids who will never be in a world where they don't see themselves in literature. Kids of all backgrounds should be able to see their lives represented in books.

I really want to emphasize the importance of listening and listening openly. It's important that people who are publishers, creative directors, social media managers, writers, producers, people who work in spreading messages to the public, that they listen to the stories of people with different backgrounds. I want to empathize that stories about Black girls are out there. #1000BlackGirls wasn't about writing books, but about creating access to them. It's important that we try, in our everyday lives, to make space for other people's stories, as well as our own.

How has being exposed to racial tensions in America at an incredibly early age influenced you?

Being Black is my upbringing. In America, where everything is so systematically dependent on racialized oppression, it's pretty impossible to ask a person of color to separate their race from their upbringing. The way I eat, talk, sing, laugh, dance, and even take in the groceries is all relative to my Blackness. Everything about who I am as a person is under constant attack due to anti-Blackness. I have to be cautious not to wear dark clothing at night. I have been sexualized, criminalized, and labelled as a terrorist threat. It's scary to know that your own country sees you that way because of your race.

What has been the hardest part of leading a movement?

Youth organizing takes a lot of money and connections that not everyone is willing to give — especially if people can't directly identify with [the movement], such as Black Lives Matter. People aren't as willing to give to youth who disrupt the comfort of their privilege. We rely on a lot of folks who have experienced the same struggles we've had in the community, along with our allies and adult comrades. We also rely on resources from the connections we make. It's the little things like that which keeps us going, but I wish more people would be willing to offer help.

if you could talk to the next generation of activists, what would you tell them?

Make sure that young people occupy positions of power, but don't disconnect from your elders. We can learn from them and their struggles, and they can be powerful allies in our work. We have to remember that our communities are what matter most, and so going forward you should remember to ask yourself, What am I doing that will improve the lives of not only myself, my friends, and family, but people three generations from now? These days it's really easy for activism to be made into a brand or used for clout, but that question is a good strategy to stay grounded in why we do this work.

You're a student during a time where we're seeing more school shootings than ever. How does that make you feel?

I'm terrified. It's not just in my schools, but it's everywhere I go. I can't go anywhere without locating my exits. My 18th birthday was ruined because someone ran into the theater I was in yelling, "SHOOTER." I ran for my life along with all of Times Square — I've never seen anything like it. It was a panic. I'm traumatized from that incident, and I'm still one of the lucky ones. It's the constant fear that we could be in a shooting that I and the rest of my generation has to deal with. I think our whole country is traumatized by gun violence, some more deeply than others. My generations' brains have been conditioned to live in fear.

There's a mentality in America that hinges on the idea of "teenagers are going to save us." Do you agree or disagree with this sentiment?

Teenagers are saving ourselves from the mistakes and neglect of the previous generations. At a young age, we've been forced to think ahead and take the necessary actions to protect our children that older generations never bothered to. I think it's disgraceful that there's been a reliance on young people to fix the problems we didn't create. This isn't fun. I don't want to be glorified. I don't enjoy sacrificing my teenage years. I want adults to listen to our collective voice and act. I want the guilty and indifferent parties held responsible.

How has being a gun activist at a young age shaped your adolescence?

My work as a youth activist has shaped my identity, for better or worse. My activism work has dictated major parts of my life, and has prevented me from being a regular teenager. I've missed everything from birthday parties to school to family events to hanging out with friends in order to do activist work. It has taught me to grow up quickly because adults won't care unless we make them care. Being an activist has changed the way I think about the world — I'm a more critical person.

NEXT UP
Astrology
How to Use Astrology to Access Past Lives
Astrology
Your February 2023 Horoscope Is A Breath Of Fresh Air
Astrology
Get To Know Aquarius, The Certified Freak Of The Zodiac
Fashion
Jenna Ortega Is The Face Of Adidas’ Newest Line
Style + Culture, delivered straight to your inbox.