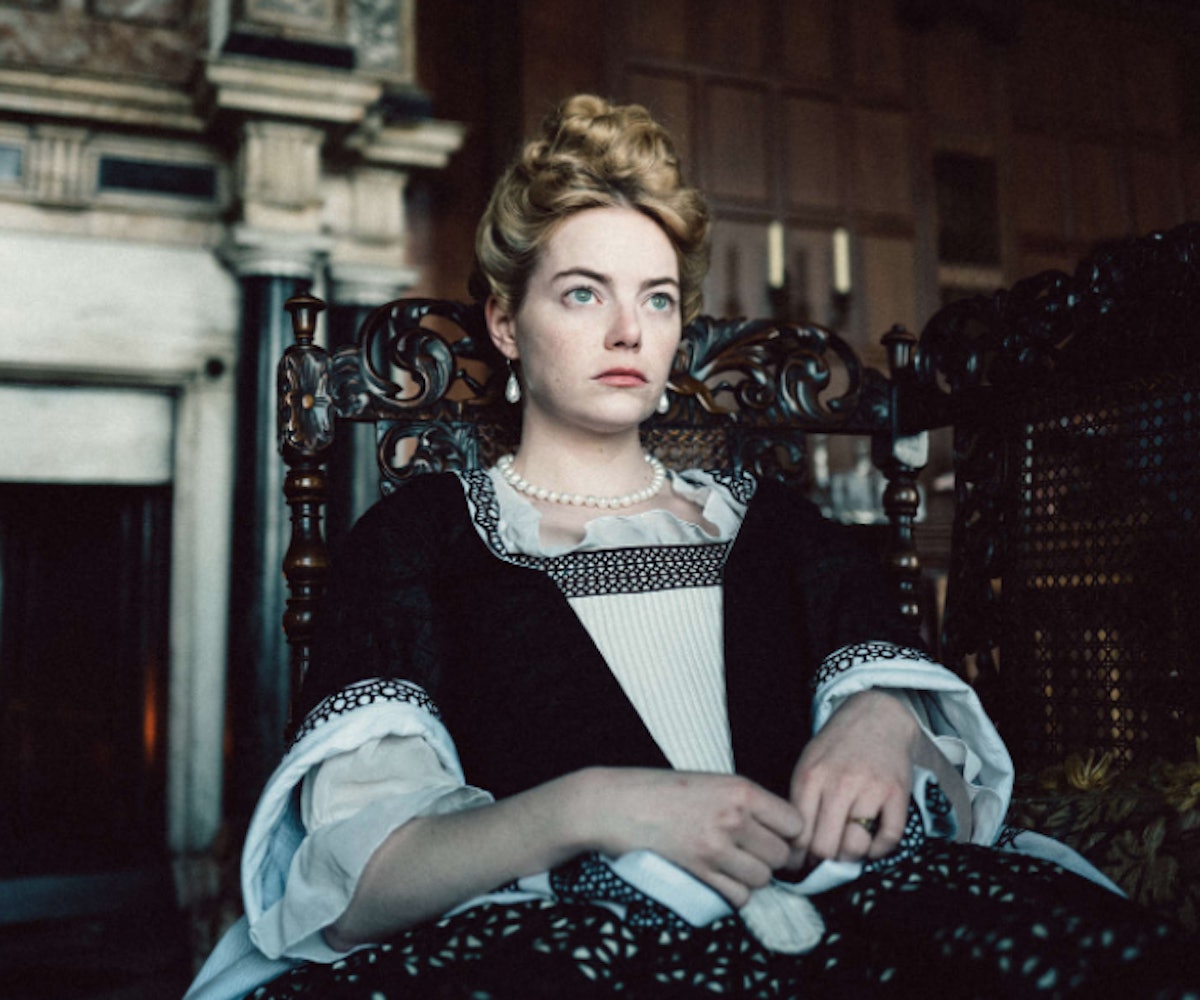 The first time Emma Stone shared the screen with a bunny, it was a decade ago, in 2008's The House Bunny, but, rather than an actual rabbit, the bunny in question was Anna Faris, playing Shelley, a dejected Playboy model, kicked out of Hef's mansion by some scheming fellow bunnies and forced to create a new warren of friends at a down-on-its-luck sorority house.

In Stone's new movie, The Favourite, there are actual rabbits—17 of them, to be precise, representing each of Queen Anne's (Olivia Colman) lost children, some "born as blood," the queen says, while others were stillborn or died in early childhood. The Favourite is loosely based on real events, recounting the fall from grace of Queen Anne's most trusted companion, Sarah Churchill, the Duchess of Marlborough (Rachel Weisz), and the accompanying ascendance of Abigail Masham (Stone). One thing that's historically accurate is that Queen Anne did indeed lose 17 pregnancies and children, and was known for being the "childless queen," an epithet that seems particularly cruel considering how much grief she endured surrounding her childlessness.

The inclusion of the bunnies, however, to represent those all-too-brief lives is an apocryphal flourish, not unlike the incredible dance scene in which Sarah can be found voguing with her rival Abigail's future husband. Not only is there no record of Queen Anne having kept such a maudlin menagerie, but also, rabbits only popularly started to be kept as domestic pets in the 19th century, a full 100 years after The Favourite is set. But the presence of the bunnies within the royal household is consonant with that of other animals in the film; a prime minister walks around with the "fastest duck in the city" on a leash, and lobsters are brought to the queen's private chamber so they can race one another, before being eaten.

But while the other animals—the duck, the lobsters, and even the frequent verbal invocation of badgers—are utilized mostly (though not purely, little in this film is pure) for comedic effect, the bunnies are a pathetic bunch, serving as a reminder of the constant cruelties of life, and the ways in which nothing is assured, even for the most powerful woman in the world.

Director Yorgos Lanthimos' choice of rabbits here is a brilliant one; there is no other animal who at once represents innocence and subversion so clearly. And bunnies have an interesting history on film, having embodied everything from the idea of innocence and goodness (Thumper in Bambi), to the destruction of said innocence (that boiled bunny in Fatal Attraction), to pure evil wrapped up in a cuddly package (Monty Python and the Holy Grail), to the looming specter of death (Donnie Darko), to whatever it is David Lynch was doing in his 2002 short film Rabbits. And who can forget what his childhood stuffed bunny meant to Nic Cage in Con Air, as he begged of a hardened criminal: "Put the bunny back in the box"?

A bunny's power, then, lies in the fact that it has no inherent power other than its ability to remind humans of both the casual beauty and cruelty of the world. And, since bunnies are known for their ability to have offspring, it seems particularly perverse that a woman who can't have children would keep the animal kingdom's most prolific member as a reminder of her inability to procreate. But, bunnies are also known to eat their young. They are, then, the perfect animals to project upon; they share the same "cute ears and wide eyes" of Stone's steadily social-climbing servant, but it is impossible to know precisely what machinations are transpiring behind those innocent, adorable faces.

And this, of course, is the real allure of bunnies on film. You want to believe they are innocent, just happily hopping around, sometimes landing on one another, but it's impossible to know what lurks beneath the surface. It makes sense, then, to be wary of them, as Sarah clearly is; she doesn't like to interact with Queen Anne's brood, calling them "macabre." It is Abigail who is attracted to them, Abigail who realizes that showing affection toward the bunnies is the surest way to the queen's heart. But as The Favourite draws to its close, and it becomes clear that Abigail's Machiavellian instincts are intrinsic, not situational, her affection for those rabbits is revealed as a mere affectation. She shows callousness to an innocent creature; she shows her corruption by exploiting the innocence of a rabbit.

And yet, what Lanthimos makes clear in the final shot of the film, is that it is the bunnies that will continue on, long after the games of courtly intrigue have played themselves out. The bunnies, these fluffy manifestations of purity, grief, persistence, and pain, will continue multiplying, immune to the momentary whims of the humans around them. They might seem frivolous, but they are reminders of the exigencies of life, the careless cruelty of death, and the absurdity of everything that takes place in between. And they are everywhere, all around us, quietly increasing in numbers; demonstrating that while, in one moment, it might be our feet pressing down on their necks, it's just as likely that in the next moment, there will be someone else who is pressing down on ours. And all that will remain, in the end, are the bunnies, with their cute ears, wide eyes, and killer instincts.