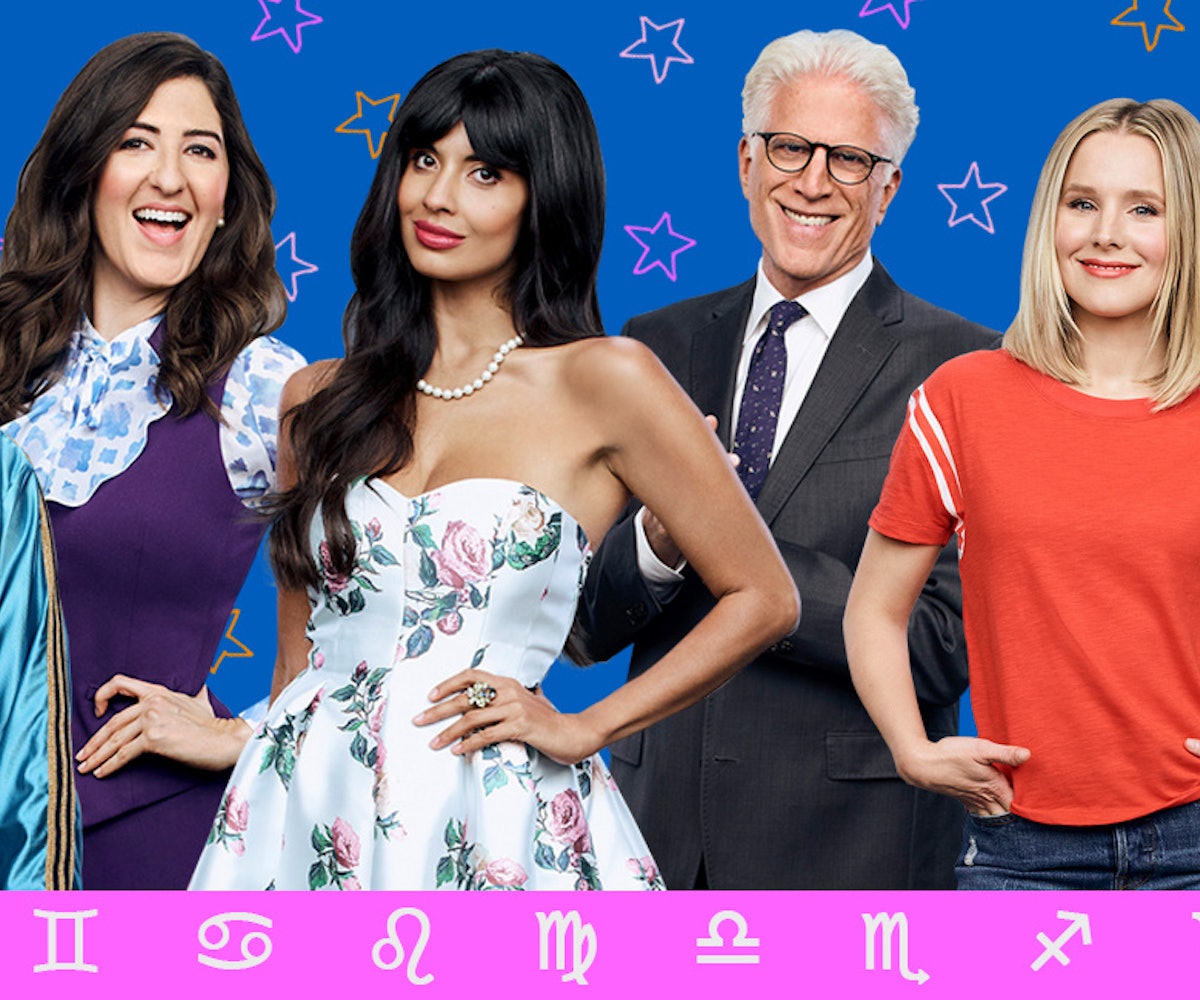 Alright, here is the truth as I see it, if you haven't been watching The Good Place then you have been being very bad to yourself. Why? Because The Good Place is a phenomenal show full of challenging characters, exciting plot lines, and—well—Kristen Bell. My queer heart will not rest! In honor of the queen of bisexual subtext and overt text, I offer you the signs of The Good Place characters.

Direct, bold, and painfully to the point, Eleanor has Aries written all over her. You know the type: temper tantrums, foot-in-mouth disease, and well… ultimately, deeply charming. Eleanor maintains that she works best on her own but, actually, flourishes in a group environment where she can lead and be challenged at the same time. The moment the group threatens to disband, she says: "I don't need you guys, you don't need me, and since you don't need me, I'm just gonna take the 'me' out of this cake!" As for flirting, Eleanor's all fire: "I thought she was intimidating, that's why I pushed her in a lake."

Okay, you got me. I really didn't want to do the easy thing and say Leo. I think pretending Tahani's vanity is leonine would be entirely without nuance. Tahani is vain, sure, but more than vain she's socially maladjusted and yet strangely bossy. Like she would be the boss of the party if everybody just figured out what a party WAS. Tahani gives me hard Virgo vibes, enhanced by lines like: "I just couldn't get a proper calligrapher at five in the morning." And: "This couch is covered in dog hairs, but I have not seen a dog." Plus, Virgo is the secret freak of the zodiac, and Tahani is definitely a secret freak underneath that prim behavior (for proof, look to her… relationship… with Jason).

Maybe it's too easy to claim Libra for Chidi, and maybe I should have dug harder to surprise you with some sort of Capricorn subtext based on his saturnalian devotion to rules and the "it must be" of things. But, listen, who are we kidding? A man whose dissertation's premise is "what do we owe each other?" That man is a justice-seeking, balance-maintaining, devil's advocating Libra. Plus he's a total people-pleasing machine! Remember this scene between him and Simone?

"I am absolutely paralyzed by decision making, and it is destroying my life."

"Yeah, I sort of got that when you couldn't choose a chair to sit on."

"Well, I didn't want to offend you in case you had a favorite."

Jason is entirely his own planet and, honestly, if there was a 13th sign I believed in, I would let him have it. Perhaps that sign would be the constellation shaped like an ATV or a bounce house. But, since we're working with what's available, I'd say that Jason is what a Sagittarius raised in Florida on a steady diet of whippets might look like. Jason is clearly adventurous, he's much more intellectually curious than his life has set him up to be (enough to stay with the study group), and he's strangely charming. Sagittarians are mutable and can often be found playing team sports, so it makes sense when Jason exclaims, "I love being on teams!" Almost as much sense as him running into a room to say, "I'm completely wasted, I'm gonna go barf one last time and then I'll be ready to learn PHILOSOPHY!"

Those of you who have been following the show for three seasons know that when Janet first came to us, she echoed the sentience of a bot like Siri or, her forerunner, Smarterchild. But, Janet is much more than what anybody watching the show could have expected. Within her, a whole universe of useless information and not one lick of sense about what to do when you like someone. How utterly Aquarian. Janet's more refreshing qualities come from the moments she acts like a fallible human being, and what could possibly ring more Aquarian than Janet admitting she's in love with Jason by stating, "My excuse was that I needed time to evaluate my complex feelings but that was just a rationalization"? And, if all that love life stuff doesn't convince you… how about this key moment from Season 3? "Bing! I'm doing my own bings now."

Michael is a tricky character because, like Janet and Jason, he reads as entirely outside the limits of category and certainly, we know, not of this world. What sign would you assign a demon who, when instructed to envision a new kind of hell, constructs a world of mind games, where fro-yo rules, nobody can curse, and everyone loves the chowder fountain? That sort of petty passive minutiae is truly demon Pisces territory. Michael is at once passive and demanding, bossy and haphazard, emotionally possessive and unable to understand what emotions are for. He is both fish, swimming in opposite currents—one toward a thick chowder-y purgatory and the other toward a school of glittering rainbow fish. The moment Michael experiences Earth, he experiences true Piscean problems, like his complaint: "Every part of my body is either too dry or too wet." But, under the fishy slippery demon of his role in the Good Place lies an oceanic soul whose only desire is to love deeply and enduringly. "This is all we have Janet!" he yells when the odds appear dire. "We have Chidi and Janet and Eleanor and Tahani and Jason, and THAT IS IT!"

Please see the following quotes from Season 3 for proof positive that the Judge is a Taurus.

To me, nothing was more Capricorn than the moment when Michael tried the win Jeff over with a small joke and Jeff responded by dryly stating, "Wow, I haven't heard a joke in a million years and I still haven't." Confidant in his job, willing to take a risk for the right (frog-themed) offering, good at minding his business, and not amused by you, Jeff is a Capricorn who knows when to stay in his lane and when to take the hit for someone he likes. While he keeps his affections close to his chest, Jeff is content to work until his work is done. Although he prefers decaffeinated antimatter, he'll take the reg stuff since "it's only 4:30, my shift doesn't end till 4 billion"

Simone is by far my favorite new character on the show for more reasons than her charming demeanor and even more charming face. The not-so-secret caretaker of the whole group, Simone is definitely a Cancer, always tending to their bodies like that moment she told Eleanor: "These are delicious free cupcakes, get over yourself and eat one." Bossy with affection and private about her own investment, there can be no doubt that Simone is all in when it comes to the group. What's less obvious is her sideways, take-no-shit mama bear attitude which becomes apparent in moments like the one between her and Eleanor when she quips, "I saw my friend hiding behind a plant so I got concerned, but then my friend lashed out at me, so I'm gonna take off and leave her here with dirty leaves in her hair."