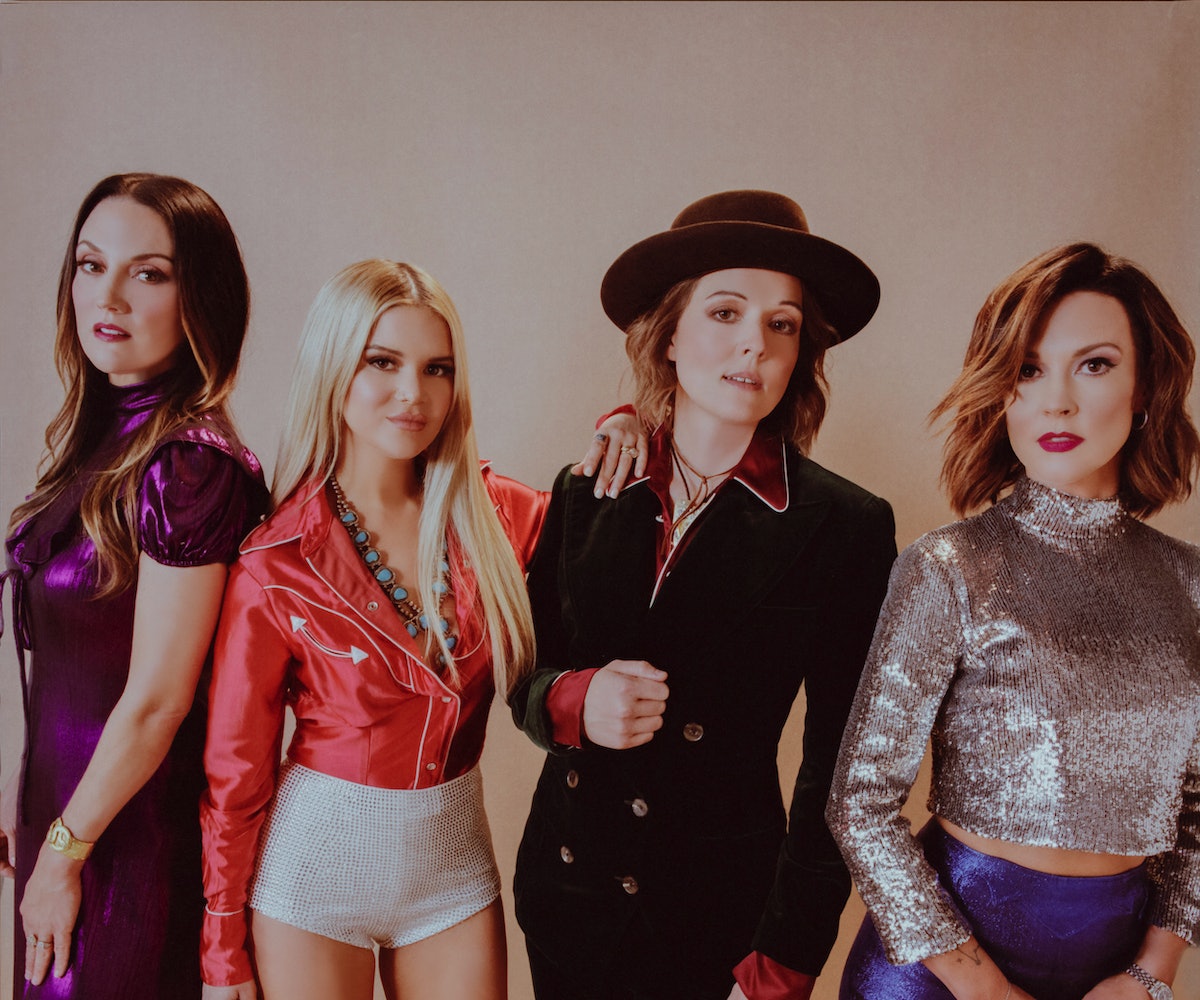 It would be cliché to say country music is at a crossroads, but you know what they say about clichés: They're repeated because they resonate. Country is a genre defined by "unruly women"—think, the Dixie Chicks' 2003 anti-Bush statement that launched a thousand death threats, and ultimately removed the band from their place at the head of the industry; Loretta Lynn's "The Pill"; or even Kitty Wells' "It Wasn't God Who Made Honky Tonk Angels"—but, the people with the power to make decisions consistently miss the mark when it comes to figuring out what an audience wants to hear. This reality has been implicitly known for, well, forever, but explicitly known since 2015 and the infamous "Tomato-gate" moment, when a country radio consultant defended the lack of women given airtime, comparing women in country music to the tomatoes in a salad—nothing substantial, just the garnish.

Determined to prove to herself that country radio really was playing fewer women, Amanda Shires—part of country supergroup The Highwomen, along with Brandi Carlile, Maren Morris, and Natalie Hemby—spent her downtime while on tour listening to various country music radio stations and tallying the number of women she heard on the airwaves. It wasn't a lot.

But, Shires, Carlile, Morris, and Hemby are changing that, specifically with their new, eponymous album. Full of gender-flipped everyday songs, The Highwomen's titular track is inspired by a song by The Highwaymen (this supergroup, comprised of Johnny Cash, Willie Nelson, Kris Kristofferson, and Waylon Jennings, was the inspiration for The Highwomen), only rather than featuring the band inhabiting the roles of a sailor, dam builder, or starship pilot, they inhabit occupations like preacher, Freedom Rider (sung by Yola Carter), and a healer. This switch-around is notable for the ways in which The Highwomen chose to amplify the voices of people who try and make life better for everyone around them—just like they're trying to do with country music.

On a hot summer day shortly after the Newport Folk Festival set that saw the four Highwomen—Brandi Carlile, Maren Morris, Amanda Shires, and Natalie Hemby—performing live for the first time as a group, and joined by Dolly Parton, Yola Carter, and Sheryl Crow, I sat down with the band to discuss their journey, the album, and what they want to see more of in country music.

"Redesigning Women" has been out for a couple of weeks now, how do you feel about the response to that song?

Maren Morris: I don't mean to sound like I wasn't confident in the song, I just think we all were probably a little taken aback on how positively received it was, how many people heard it, because this is still a very new band and we don't know who it's gonna reach right off the bat. For the first 24 hours, we had so many people reach out. I had so many friends in the industry reach out and say, "Thank you for this."

Amanda Shires: Like, everybody loves their baby. When they actually take it out of the house, they're like, "Please don't hate on my baby." [Laughter]

But you had to at least have known a little bit?

Natalie Hemby: You just never really know. You put these things out and we do have the best intentions, but you don't know if everybody agrees with your intentions. Also, we are trying to push some kind of agenda, but I also love the hilarity and the funniness of the song.

Brandi Carlile: I was worried about the opposite, but I come from another world. I was worried that people were going to think that we weren't pushing enough of an agenda and that the song was making light or something like that. Neither one of us ended up being right—everybody loved it.

MM: Months ago, I was like I think "Crowded Table" [the second single] should be the first thing we put out, and you guys were like, "No, it should be 'Redesigning Women.' I was like, Are people going to think we're too sassy right off the bat?

The thing that resonated with me was that you are all telling very different stories about what it is to be a woman and what it is to be a person in this society. But, time and time again, I feel that women in country music are asked to tell the same stories over and over: of being heartbroken or not necessarily wanting to be a mom one day; clean the kitchen and fix the world at the same time. When you were approaching this album to write it, what was your headspace?

AS: There's a lot of stories that we need to tell. It's been a point for a while that women get dealt the needy songs or the gospel songs. Brandi has a better way of putting it about the stories. But we had this intention, and I think that everything we do from the beginning we want to go back to the original purpose.

BC: I was talking to Bonnie Raitt about this last week. She is, I think, one of the most authentic feminists in all genres. She kept referring to this as the "mom button." She isn't crazy about the fact that that's something. I just surmised that what she means is that we don't really want women to preach or instruct, even if it's anecdotal. Because as soon as we feel talked down to or preached at, we shut down to women. Whereas we're more accepting of pastoral presence from men. That's just a theory I've been thinking of over the last few years. With The Highwomen, I wasn't actually that interested in writing. Don't take that the wrong way, I just really wanted to be more of a singer and a friend in this scenario.

AS: We wrote the hell out of that Highwomen song, and then we were like, That's it, mic drop.

BC: It was like a seven or eight on my priority list, but it wasn't really. I knew I would get that and I knew it'd be great. But I wanted to hear what other women had to say and then help say it.

Bringing Yola in for that first track was sensational.

NH: I love Yola, too. I had her record, and I just kept listening to it over and over again. I was like, I haven't heard a voice like this. It's not a very new record. Some of my friends had been posting about it, so I checked it out. I was like, Oh my God I'm in love with her. It was such a loose collective of women at the time. I was like, "Have you heard of this girl Yola? Not only is she a phenomenal singer and writer, she's also a joyous presence to have around."

How did Dolly [Parton] end up on your stage at Newport?

BC: That's not true. It's just sometimes the parlor tricks, my wife calls me a one-trick pony. It looks like that, but it's not that way. I just like facilitating collaborative moments.

MM: It was funny because we didn't get to talk about Dolly in our previous interviews because it was still a surprise. But that was in the works for many months. And she doesn't do a lot of that anymore. It was really special getting to rehearse with her last week in Nashville at RCA. She recorded "I Will Always Love You" and "Jolene" right there in the center of the room. She said that she hadn't been back since those songs.

AS: And we did a rehearsal there too.

MM: Yeah. We were rehearsing, and it was so emotional because that was her singing those songs. She was singing "I Will Always Love You" with Brandi at RCA. We were the only living people that will probably get to witness something like that.

AS: That was a miracle.

BC: If there is one person that embodies the brand of feminism that I'm particularly attracted to, it's Dolly. She changes you without you even knowing you've been changed.

BC: I mean the word has had so many seasons, it's changed what it means so many times. I think that what it means right now, she would embrace it if she hadn't been through so many generations of it meaning different things. Maybe it didn't describe her at that time, but God, y'all her heart is right on her sleeve, and that is just enough.

MM: Well, you were saying she wouldn't give up her publishing to Elvis, like, how awesome is that?

AS: That yellow jumpsuit [she was wearing] when she showed up, and I was like, Holy shit, this is a real Nudie [suit, named for creator Nudie Cohn], it's the Wagonmaster. The one that she wore when she used to [play with former songwriting partner Porter Wagoner].

MM: She had heard that we were gonna wear our Manuel [Cuevas] suits and then she was like, Oh I've got something for this.

How did it feel to balance being individuals with the communal spirit of performing as a group?

NH: We can't help but be ourselves. Each one of us is so different. The cool thing is we came together. We had to work out parts and work out songs, it kind of just naturally happened. We didn't have to be pressured.

MM: We all turned in songs that we thought could work for this sound. Some of us have solo songs, like my song was changed, Brandi just jumped on all of those harmonies perfectly, and we didn't have to work out anything. That was just natural.

AS: As we were together and we were hanging out more, we just started picking up on things we wanted to sing. When somebody got excited about singing something, of course, they should get to do that.