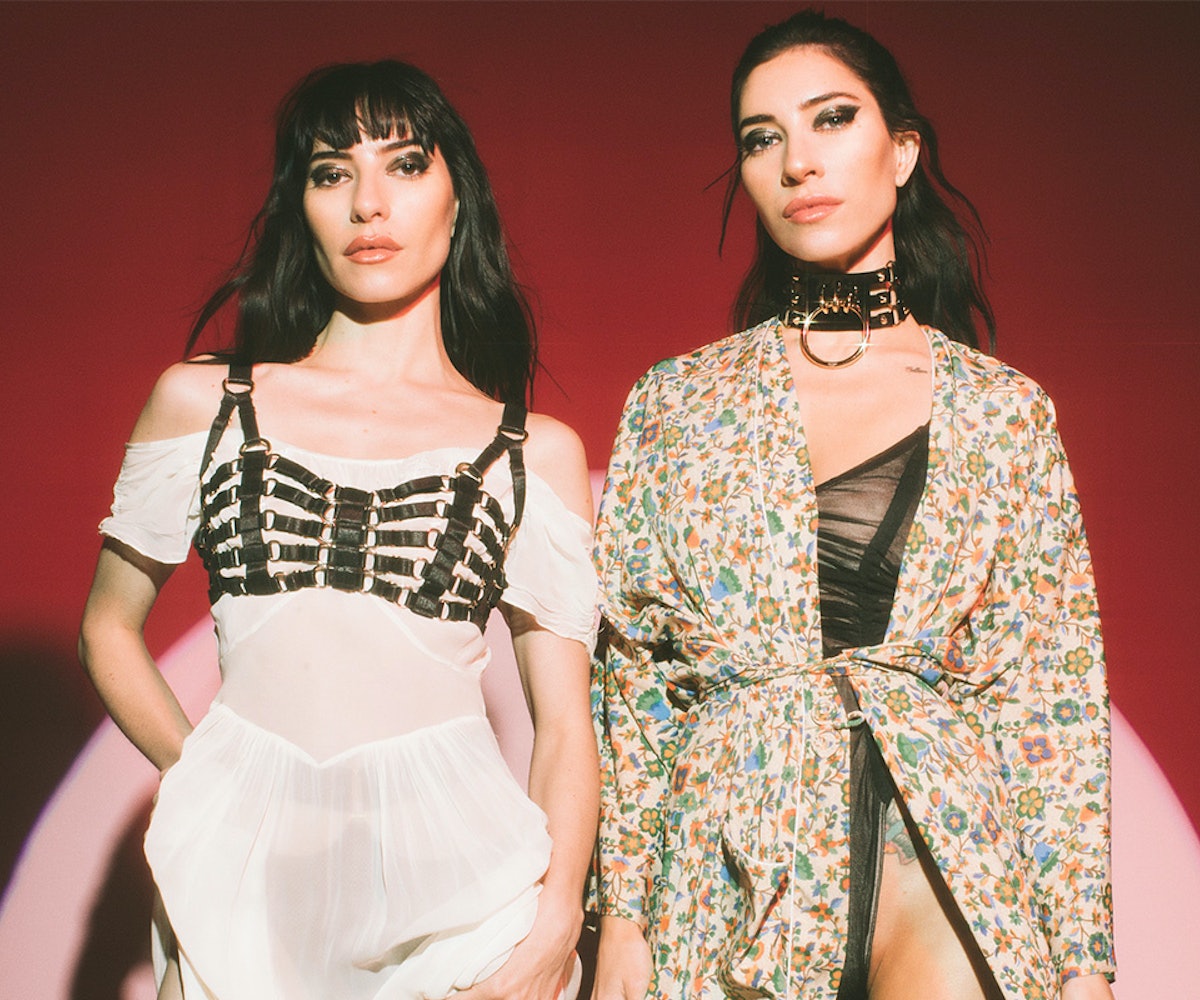 "All rise for the gay national anthem" is what The Veronicas yelled on-stage at L.A. Pride in June, before slaying a performance of their hit song "Untouched." I had never thought of "Untouched" as a gay anthem, as there's nothing explicitly queer in the lyrics, but as I looked back on the 12 years since the single was released, I realized that what The Veronicas did for queer people in the late-aughts was monumental.

Jessica Origliasso, one half of the identical twin duo, is an out queer woman. She had a very public relationship with Ruby Rose, and was unapologetically open about her sexuality, both in The Veronicas' lyrics and as a public figure—something that was still sadly unheard of in 2008. In a time when the pitter-pattering of Blackberry keys could be heard throughout the hallways of every high school, and Myspace's Top 8 was the apex of social capital, I was a closeted, teenage Veronicas stan. I wish I could tell my 17-year-old self that, a decade later, I'd be sitting in a hotel restaurant in Los Angeles with Lisa and Jessica Origliasso, discussing queerness in pop music.

The twins click-clacked into the hotel lobby, Lisa wearing floral boots and a black, ankle-duster trench; Jessica was in a flame-printed button-up and a floor-length, cheetah-patterned coat. They greeted me warmly with hugs and a "hi, love," and a cameraman nearby raised his camera, to shoot the Aussie duo for their upcoming Osbournes-like MTV reality series. I sat down with Lisa and Jessica to chat about their new album, music as a home for LGBTQ people, and publicly dating women in the late-2000s.

Let's talk about your latest single, "Think Of Me," which dropped in March. What was the concept behind the music video?

Jessica: Eternal Sunshine of the Spotless Mind is one of my most favorite films.

Lisa: We reference the idea of the memory-erasing clinic and moving forward, and we wanted it to deal with that right at the beginning, but the rest of the video, we didn't want to address the relationship again. It was all about leaving the past behind and stepping into this new era where it's just all about you in the most epic ways you can possibly imagine.

When are we getting more new music? Is there an album coming?

Jessica: We just shot the music video for our new single, so that'll be out in July. The album is collaboration-heavy. There's a friend of ours called Allday, an Ozzie rapper, who we just featured on one of his records, a song called "Restless," and we've got our next single with him. There's a guy named Wrabel, who's just had a big song with Pink recently, and he's just divine. We have a song with him on the album. It's sort of always been just the two of us and producers or whatever. So, it's been a really fun time in the studio.

Lisa: It has to do with our dynamic, as sisters and work partners and family. Anyone can log online and see what we've done in 15 years. It's more the in-between moments of what people know about us.

What brought you two back together?

Jessica: The hiatus that gets talked about, it was really just… life happens. There were four years there where we were basically not able to release music through our label anymore, so there were no official releases during that time until we got off and signed to Sony Music. The stars just aligned for us, and it was the right time to get back in the studio together. A lot had happened. There was a lot we needed to connect again, on a musical level and as sisters. And we had a lot to say. So, it just felt like the perfect time to, to write the album. But the funny thing is we never were apart. It's not like we went off and did solo projects.

Some LGBTQ artists choose not to center their queer experiences in their music, so as to make it about the music. Others want to center it. Where do you stand on writing about sexuality in your music?

Jessica: It's about normalizing diverse sexuality in every way. The LGBT community has taken such a safe space in music in forever, going to shows in places where clubs might not be safe for you, or other places that might not be safe for you to be yourself. Music has always provided—or certain artists—have provided spaces for the LGBT youth to be able to go and be themselves. And that's where the connection between music and the community has been so important.

Lisa: We grew up in a very queer upbringing. We grew up in theater from the age of five. All our mentors were gay or queer. We grew up with Rocky Horror Picture Show, being shown that from the age of eight. Everything was very normalized to us. So, it was natural for us to then go on and create music that reflected that. It wasn't strategic. It wasn't like, Oh, let's write a song about this. It was purely just writing about our lives, and that was it.

Jessica: We also grew with our fans. I was discovering my sexuality at a time when we were going through that with our fans. It was a very unique time. And I am so proud that we forged something that has helped, or been an important part of people's lives, especially LGBT youth. It's probably one of the proudest legacies.

Lisa: And really it just came from this space of like… we wanted our friends to be able to come to our shows and have the time of their lives. And the majority of our friends were queer.

Jessica, what was it like being an out, queer celebrity back in the late 2000s when queer people still weren't super visible in media yet?

Jessica: Tabloids at the time were on my ass like crazy. I always felt comfortable with whatever I want to do. I remember my record company at the time rang me one day and was like, "Do not leave your hotel room. A photo of you and the girl that you're seeing is worth $20,000 if they get a photo of you together." And I was like, okay, one, why wouldn't I leave my hotel room? Two, I'm dating this girl, I'll do whatever the fuck I want to, thank you very much. And three, I don't need to give anyone a fucking quote on anything. Like, bye, I'm going to a gay club right now, and I'm probably going to make out with her, and too fucking bad, bye. I would get upset when we would get followed. And then they would be like, "Well, don't go out if you're upset." And I'm like, no, actually my privacy is my privacy, and I'm not also going to reduce any part of how I'm living for anybody.

It's crazy that, in some respects, we're still fighting many of the same fights as we were 10 years ago, 30 years ago.

Jessica: Yes, it's tiring. Thank god for music and that we can that so much reinvention constantly in creativity. It's one of the most powerful forms of expression and communication. For us, it's always important to cite your influences. Like, there were so many trailblazers back then and they get no recognition. Even Madonna, bless her, she gets recognition, but not to the extent that—I mean, she was a fucking punk. She was punk as hell.

Lisa: To think, back then, how incredible it is that she could even do that, because it wasn't on trend to do it…

Why is "Untouched" the gay national anthem?

Jessica: It's funny because I made that comment at Pride being like, "Please stand for the national gay anthem." People say that we gave the gays "Untouched," but it was actually the gays that gave us "Untouched," because we literally grew up influenced by all the music that was defining queer culture. So, of course, we were going to go on to create music that reflected that. "Untouched" doesn't say "I want to kiss a girl," that's "Take Me on the Floor." There's no overt language in "Untouched," but it's something about that song.

What does this new era of music represent for you two?