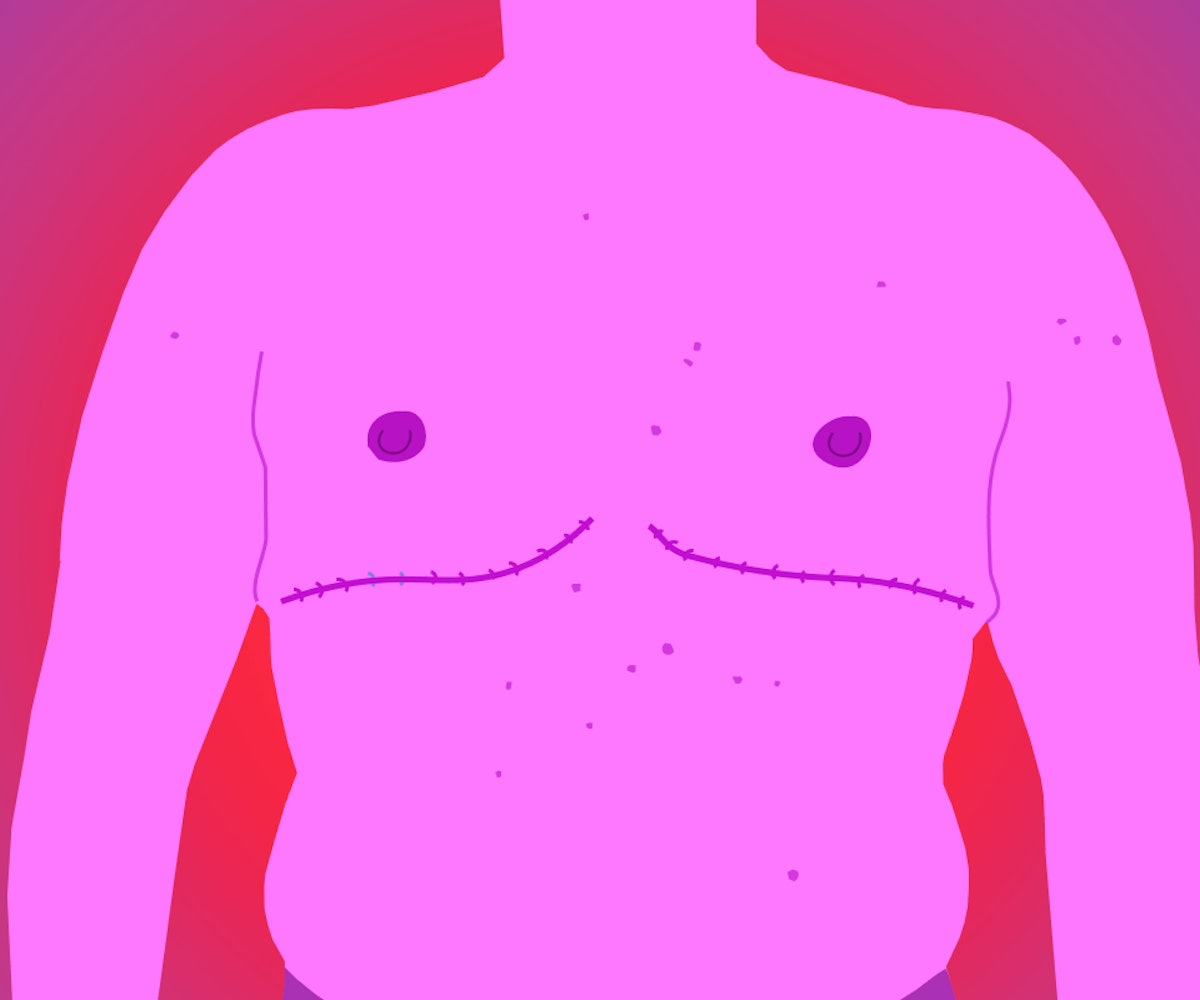 Top surgery—or double mastectomy, or chest masculinization—is a common gender-affirming surgery that people born with breasts typically get in order to feel more secure in their bodies. However, the surgery is not as simple as scheduling an appointment with a surgeon: There are social, bureaucratic, and logistical elements that come into play. It's totally normal for someone who wants the surgery to be scared or nervous, so I spoke with individuals who have gotten it, as well as a surgeon who performs the surgery, to lay some groundwork for what you can expect.

Everyone who wants top surgery decides to take the leap at a different point in their transition. Many times, people are already socially transitioning when they make this medical step, but that's not always the case—and in fact, it's not necessary for you to be trans in order to get this surgery. The World Professional Association of Transgender Health requires a diagnosis of gender dysphoria by an informed behavioral health specialist as a prerequisite to the surgery, which doctors typically follow, but you can have this without being trans. Ellen Ford, a designer and podcast host, uses she/her pronouns still, and notes that she realized she wanted the surgery only after seeing another friend who uses she/her pronouns get it first. "People get this surgery who aren't trans all the time," she notes. "And that's totally cool."

Dr. Rachel Bluebond-Langner, Perlmutter Associate Professor of Plastic Surgery at NYU Langone Health, notes that the surgery itself typically lasts two hours, and there are two different types of incisions that can be made to remove the breast tissue. With one, called the periareolar, "the incision is confined to the areola." The more common type, though, is the double incision, which is the type that results in scars underneath the pectoral muscles. With this method, "the incisions come across the pec shadow and they go up towards the armpit, and then the nipples come off and are resized so that they're about 2.2 centimeters... and they go back on as grafts," she explains.

After the surgery, you'll have bandages and drains, which collect the fluid that your body will produce post-op. After you leave the hospital, you'll visit the doctor every week until the drains are out, and then six weeks, three months, six months, and one year after the surgery. The drains and stitches will be removed in check-ins with your doctor after the surgery is done. After the drains are out, it's possible to get a seroma, which Dr. Bluebond-Langner describes as "a buildup of clear fluid," which can be aspirated in office. She notes that infection is very rare, as is nipple loss, but that they are possible post-op occurrences.

Dr. Bluebond-Langner also notes that post-operative depression is possible, just like after every surgery. Ford says she experienced something similar. "I felt really, really, sad," she recalls. "I was sad that I hadn't made a plaster of Paris mold of my tits before surgery." She laughs about it now, but it was that feeling of losing something—even something you don't want—and not being able to get it back that pushed her over the edge.

But, the surgery is actually a relatively easy one from which to recover. "You're up and walking around right away, and your pain is usually pretty well controlled with ibuprofen and maybe a little bit of narcotics, but not much," says Dr. Bluebond-Langner. Ford tells me that she had a mild post-op experience, and said she and her friends who have gone through it found themselves on Advil or other over-the-counter painkillers after a few days, as opposed to their prescribed painkillers. Though it's a powerfully affirming surgery, and can make you feel more at home in your body, the physical impact isn't as huge as the emotional gratification. Though doctors will want to keep you overnight in the hospital, it's just to make sure you're as stable as can be before you go home.

However, you will want to be in the best shape possible before you go under the knife since it's still a major surgery. Musician and actor Julia Weldon went through a harrowing experience post-op, although they note that it could have happened to them after any surgery. They had gone undiagnosed with a suppressed immune system and contracted a virus after the surgery, which led them to experience complications and eventually fall into a coma post-op. Even though it wasn't a complication specific to top surgery, it did elongate their recovery time.

It's important to have support when you're going into the surgery and people there while you're recovering to make sure you're doing alright and to help with things you won't be able to do when you have your movements restricted. Even Dr. Bluebond-Langner agrees that an important part of your preparation once a date is set is making sure that someone is there "to help you with things like meals and taking care of your drains and getting you to appointments, and just for the emotional support in that post-operative period."

Weldon and their partner have a tight-knit community of friends, they explain, who "just brought food constantly for a month, and came to visit." Ford's friends showed out for her, too. "They were the best support system ever. People were here around the clock. There was a Google calendar where people signed up to take care of me in shifts."

There were logistical things that Ford notes are helpful to get done for yourself before you go into the operation. "I prepped my house by putting stools everywhere, because you can't really reach up. [I'd also suggest you] prepare your bed. You're going to need, like, 10,000 pillows." Maybe that's a bit of an overstatement, but she notes that it's hard to sit up for a while after surgery: "If you're on the couch, even just reaching for water was tiring. My muscles were tired."

One of the most important things to have—if not the most important—is support from your community, or at least representation of people who look like you in your life. Weldon, Ford, and voguer Syd Baloue all say that once they realized they wanted this surgery, the first thing they did was seek out their friends or people in their community who have gone through the surgery, to hear their stories. When I asked if they did research before they started contacting doctors, they all pointed to their communities as their sources of information. What's a better resource than someone who has been through it? These people told them what was possible, gave them the specifics, answered any questions and quelled any fears, and recommended doctors and other services. "You need to be not only getting informed but seeing other versions of yourself," says Baloue, and this does a little bit of both.

If you don't have that same community support, Baloue notes that it can often be found online. "There are quite a few Facebook groups," he notes. "Those are actually quite nice. People post their photos, and people will post questions. People are so supportive and so helpful—anything you ask, there will be a bajillion answers." Weldon and Ford detail that people come to them on Instagram to ask them about their surgeries, and Weldon says they've been asked to meet up.

It's also worth noting that it's totally fine and completely normal to be nervous, even if the surgery is something you really want. Baloue points out that if you're nervous, it'll help to "interrogate that [nervousness]." Maybe you're so worried because you don't feel like you have enough information. Maybe you haven't been exposed to enough people that look like you, or have gone through it and are out on the other side. Maybe you're overthinking the situation, and need to just trust that you're doing the right thing for yourself. These are all valid reasons to be worried, but they can be remedied if you know what's worrying you. "Getting informed is important, talking to other people is important, and taking your time and not feeling like you have to rush is important," Baloue says.

"I think if you want [the surgery], you know," Weldon says. "I know a lot of people are scared, and they talk to me about it, and I tell them that's totally normal. It's a big change, and it's hard to imagine the other side of it. If you're scared, but you know you want it, though, you're going to feel so free."

NEXT UP
Astrology
January 2023’s New Moon In Aquarius Is All About The Big Picture
Culture
6 Shows To Binge Once You've Finished 'The White Lotus'
Astrology
Your February 2023 Horoscope Is A Breath Of Fresh Air
Astrology
Get To Know Aquarius, The Certified Freak Of The Zodiac
Style + Culture, delivered straight to your inbox.