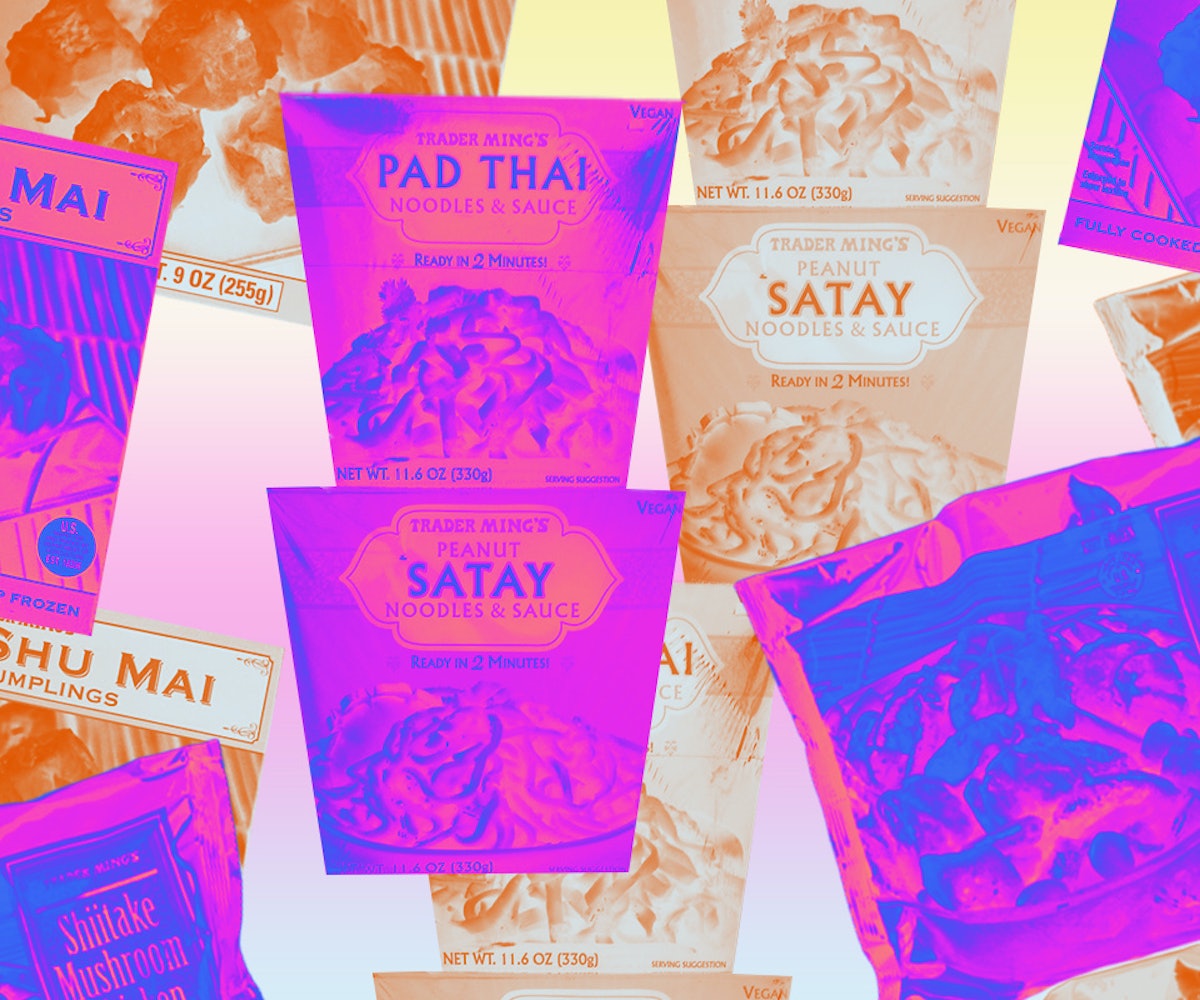 A few weeks ago, my roommate Ari returned from a big shopping haul at Trader Joe's. We don't live particularly close to a store, but about once a week, she'll wake up early and take the subway to one that's 30 minutes away to load up on groceries before work. She's long been a Trader Joe's fan (she could seriously be their mascot), and I've become accustomed to her raving about their prices—absolute steals compared with those of our very curated, organic-leaning, nearby supermarket.

"Kombucha is $2.99! Brie for $4.00!" she'll often gush while unloading her loot from the signature brown totes, like she's on a game show. I remember the time she pulled out a jar of tomato sauce: "It's so funny that this is called Trader Giotto's," she said, as she put it in the fridge.

I myself have never been a big Trader Joe's shopper. There was never one close to my house growing up, or where I went to college, and now I tend to get most of my groceries from a local food co-op. When I have occasionally popped in to pick up something up, I haven't paid much attention to the Trader Joe's branding choices that set the chain apart from many other markets.

For those unfamiliar, Trader Joe's has a ton of offbeat, quirky products under its own labels that you can't find at other stores. There's Trader Joe's truffle mushroom ravioli and also Trader Joe's gluten-free pumpkin pancake mix, both exclusive to Trader Joe's and both at the store's notoriously low prices, that are, thanks to the fact that the store often buys products and recipes directly from suppliers, eliminating a middleman. There are also Trader Giotto's products—a label applied only to loosely Italian-adjacent products—intended to be a play on the name "Joe" (although if we're being specific, Giuseppe is actually the Italian name for Joe and few Italians have been named Giotto since the Proto-Renaissance period). Along with Giotto, the other global traders include a Trader Ming (Chinese products), Trader Joe San (Japanese products), Trader José (Mexican products), Arabian Joe (Middle Eastern products), and Pilgrim Joe (Thanksgiving products).

Given the current obsession with political correctness (via left-leaning college campuses and by conservative pundits alike), it's pretty surprising that no snowflake liberal arts graduate has come forward to call Trader Joe's out on being culturally insensitive with their labels, and no middle-aged "moderates" have rebutted, claiming a war on free speech. Because something does feel off about them. Though intended to be innocuously whimsical, they lend to a variety of interpretations, the first being that there's something inherently comical about ethnic names: "Ming" and "José" are somehow witty and funny while "Joe" is the unembellished neutral. As is often the case in American workplaces, classrooms, and other environments, ethnic names are something to be mocked or not taken as seriously compared with their Anglophone counterparts. These names elicit snickers during attendance or are forcibly adapted to accommodate (white) English-speaking conveniences: "Can I call you something easier to remember? Something like Joe?"

Shoppers seem pretty divided on whether they consider the chain's labels to be insensitive in any way. "I guess it's trying to be whimsical," said Brent, a shopper-dad who was trying to keep his kid from wandering down the aisles with a scooter at the City Point Trader Joe's in Brooklyn. Indian folk music was playing from the store's speakers as I stopped to examine the endless selection of Trader Ming's adapted stir-fry sauces, Trader Giotto's organic frozen pizzas, and Trader José's guacamoles and salsas. "I haven't really thought about it as being inappropriate, but maybe." Others felt uneasy about the chain's branding choices. "It's not my favorite," another shopper, Alé, admitted. "I'm of Mexican heritage, and it's just that weird moment of othering. It's, like, my food could just be Trader Joe's as well. It doesn't have to be Trader José. It also doesn't lend to any authenticity because it's just a very Americanized thing to do."

When I reached out to the Trader Joe's public relations team, they were quick to tell me that they had already begun phasing out the ethnic-specific labels, but remained tight-lipped about details regarding when, why, and by whom they were implemented in the first place, as well as the nature of any concerns that may have been voiced previously.

"Some time ago, we made the decision to use only the Trader Joe's name on our products moving forward," said Kenya Friend-Daniels, Trader Joe's director of PR, in an email. "So, these designations do not appear on any new products we have introduced in the past two years, and as we make our way through label updates on older products, we will change any preexisting variations to Trader Joe's. While these names had been considered a lighthearted designation of their cuisine, we recognize they may have been inconsistent with the welcoming, rewarding customer experience we strive to create every day."

Despite this decision, the ethnic-specific labels remain on a slew of Trader Joe's products and it's difficult to say how long it'll be until they're completely phased out. And though it seems that the chain is on its way to fully reverting back to the neutral branding, it's worth thinking about why the global Joes enjoyed such a long run on the shelves, whether they had a purpose in addition to harmless whimsy, and whether all of this says something more about Trader Joe's as a company.

This brings us to the notion of marketed authenticity, the practice of selling a product by over-emphasizing its global roots or attachment to a foreign culture or history that often capitalizes on its exoticism. In America, a country that's perhaps most famous for adapting and fusing a swath of ethnic immigrant cuisines, we've still always been preoccupied with this idea of getting the most "authentic" experience possible when it comes to ethnic foods. We hear it all the time when someone praises a new Ethiopian restaurant or noodle shop they've recently tried. We ask them something like, "So was the place the real deal? Did it feel authentic?" Because we want to pay for the real thing—the transporting experience, even if we don't quite know what that is—not the ripped-off, whitewashed, Americanized version.

The obsession with authenticity with regards to cuisine has long been a part of American gastronomical history but has not always precluded the very same Americans from disrespecting other cultures or acting in xenophobic ways. In the early 20th century, during the height of the Chinese Exclusion era, the chop suey craze was at its peak. Americans were so obsessed with Chinese American food that it even became a recognizable subject in popular visual culture and fine art. But that love for the cuisine didn't stop Americans from otherizing it or speaking out against immigration or labor policies that made life in the U.S. unimaginably burdensome for the Chinese. Americans came to associate Chinese cuisine with words like "cheap," "oily," "fried," "dirty"—many still do. The cheaper, oilier, dirtier, and deep fried a dish was, the more "authentically" Chinese it was, because these descriptors were seen as the opposite of "refined"—the opposite of "American." In reality, Chinese immigrants were adapting their food to American tastes.

The point here isn't that Trader Joe's as a corporation has ever been straight-up evil, or racist, or intentionally insensitive. It's great that there's so much variety and diversity in their products, their prices are so affordable, and that they appear to give their employees pretty solid benefits. But there's something undeniably disconcerting about the fact that most Trader Joe's stores are located in upscale or rapidly developing former neighborhoods of color. Or that shoppers lean upper class, many have advanced degrees, and that real estate prices of homes near Trader Joe's stores are valued nearly triple the nationwide average. What kind of displacing effects does this have on small ethnic businesses in neighborhoods where Trader Joe's stores are depleting the competition? And, alternatively, why isn't the chain focused on opening locations in food deserts and low-income neighborhoods of color where their accessible price points are in more desperate demand? Perhaps if they did, its former branding choices wouldn't come off as so tone-deaf.

NEXT UP
Culture
In Cann’s Holiday Campaign, The Greatest Gift Is Being Chill
Astrology
11 Beautiful Tarot Decks To Gift Your Metaphysical Friend
Astrology
Your Natal Saturn Placement In Astrology, Explained
Astrology
Your December 2022 Horoscope Fuels The Reboot