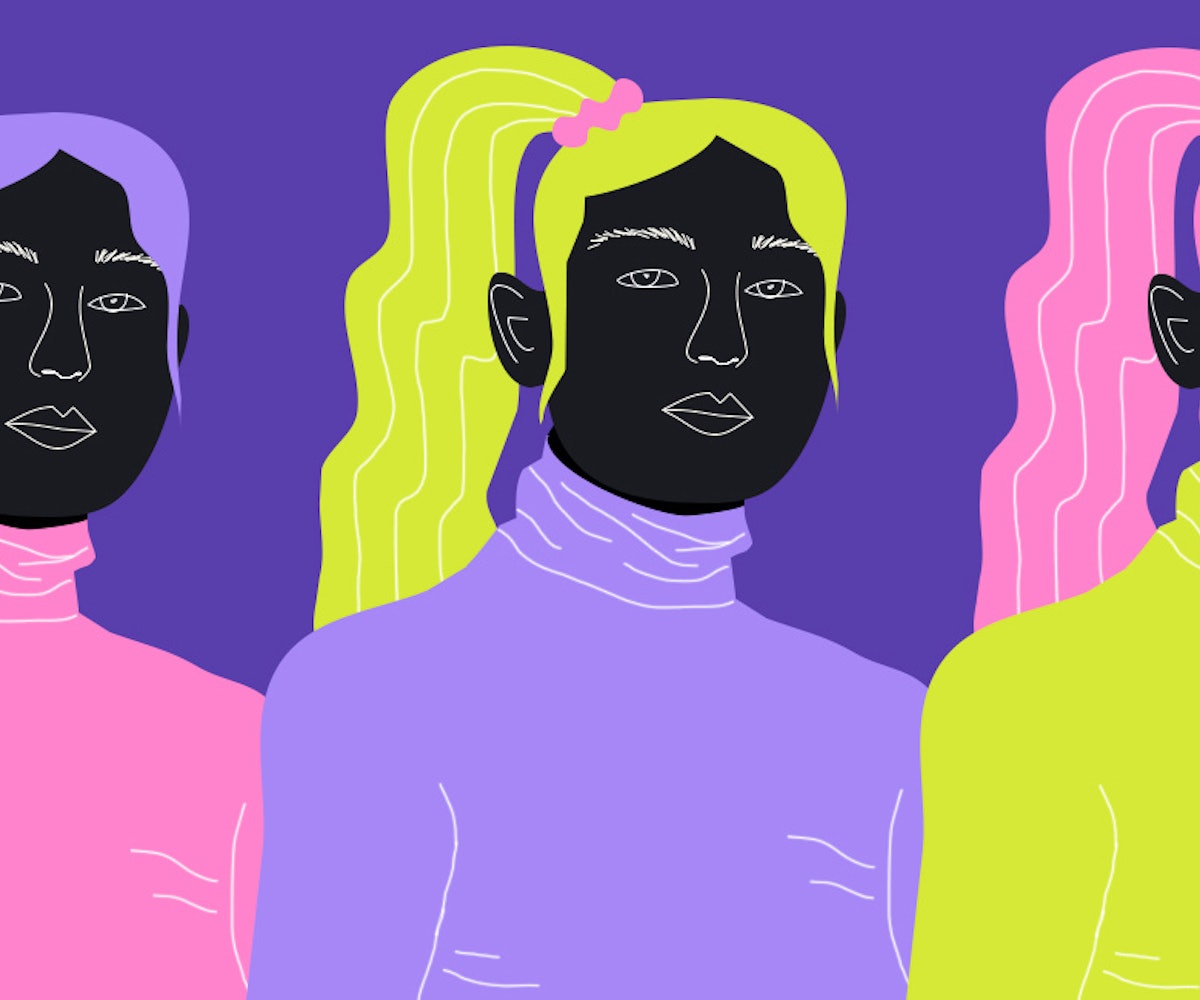 Every fall, when leaves popped up like bright red exclamation points along the tree line that grew across the backyard of my house, I'd feel the transformational pull that comes with seasonal shifts. From sitting cross-legged on the floor of a Wal-Mart, meticulously selecting back-to-school notebooks that would set the tone for the year, to eventually swaddling myself with layer after layer as the weather turned colder, whispers of fall morphing into winter meant, most divinely, the return to self that came from pulling on a turtleneck.

While my friends bemoaned the loss of denim cut-offs and tank tops, I mentally counted down until the first moment the air felt crisp and I could yank out the piece of clothing that allowed me to be anyone and anything. Around age 10, I chose a turtleneck to wear during my class's debate on the 2004 presidential election; at 16, I slipped over and over again into the same tried-and-true black turtleneck I wore until it was threadbare, imagining myself as a literary savant, or an undiscovered artist, or an intuitive actress despite having no discernible talent for acting, or an elegant city girl stuck in the rural backwoods. The turtleneck was a blank canvas for my identity. It was not just a piece of clothing, but a piece of possibility tied to the idea of reinvention.

Even now, I find myself pulling turtlenecks out of my closet as soon as the weather allows: Thin black turtlenecks meant to be tucked into high-waisted jeans, the only outfit to ever make me feel tall; chunky turtleneck sweaters thrown over leggings that remind me of days spent schlepping to ballet rehearsals. But it's no longer a transformative, makeover-in-one-top piece; today, the turtleneck feels like me.

Maybe it is the flux of identity that occurs in your 20s when you rely on things to signal to the world (and to yourself) who you are and what you're doing. Or maybe I've watched too many Nora Ephron movies starring Meg Ryan, enough to make turtlenecks and bouquets of sharpened pencils feel like staples of life, fashion, and romance. But placing meaning in an item gives me the opportunity to apply meaning to myself, and make clear that I am the kind of person who loves this, or wears that, or once wore the same turtleneck to three different social events three days in a row.

In its earliest incarnation, the turtleneck was a garment of function, going back to when knights used it underneath armor to protect their necks. Later, it was worn as an undershirt by men, especially athletes, fishermen, and those in the military, before beatniks adopted the style as their own. By 1957, Audrey Hepburn leaped onto screens in Funny Face, and the turtleneck became a gamine signature. As movements for feminism and civil rights boomed in the '60s and '70s, the turtleneck morphed from being a wink at androgyny to a bona fide feminist staple, with Gloria Steinem sporting a turtleneck leotard in a TV interview with David Frost and later appearing in an iconic photograph of the feminist movement alongside Dorothy Pitman-Hughes, also wearing a turtleneck. The turtleneck was seen on activists like Angela Davis, and the duality of subtle practicality and understated confidence made it a uniform for women out for change and reinvention, not just of self, but of culture.

Of course, before Hillary was known for pantsuits, she had her own brush with turtleneck-ed controversy, wearing a turtleneck dress with cut-out shoulders in 1993, long before "cold shoulder" tops appeared in every store. The combination of reclaiming a piece historically worn by men and radicalism of donning an item that was out to make a statement gave the turtleneck a fierceness well-suited for feminism.

I saw glimmers of the turtleneck's empowerment growing up, too. Neutral turtlenecks were the uniform of my grandmother, a single mother who worked her way to the top of a male-dominated insurance firm, and my mother, who opened her own business one year before I was born. My grandmother would come over to our house after wrapping up the day at the office, where she would cook dinner and look after my siblings and me as my mom headed off to her business in the evenings. Like ships passing in the night, the two most powerful women I knew slipped seamlessly in and out of their roles, one wearing a turtleneck beneath a blazer, the other sporting a turtleneck on its own, sleeves rolled up. They were sophisticated and strong, and what they wore felt like a costume knit from the possibilities they had created for themselves.

From movie heroines to a writer I adored (I snuck Ephron's I Feel Bad About My Neckoff my mom's bookshelf as a teenager) to the women I grew up seeing both struggle and succeed in style, the turtleneck always felt emblematic; a reminder to become the version of yourself you want to be, a hint at embracing whatever revival is lurking in the back of your mind or the back of your closet.

As I get older, and the larger the desire to transform one's self looms, the more I realize the fantastic power of having small things that remind you of who you are during times of transition, be it seasonal or life-related ones. The classic, the staple, and the stand-by that makes you feel most like yourself is as transformative as clean slates, makeovers, or reinvention. That's the turtleneck: It is both whimsical and practical, strong and smart, and, mostly, open to our interpretation, the simplicity of embracing who we are mixing with who we'd aspire to be.

So, when I dust off the turtleneck every chance I get, for job interviews or first dates or getting coffee down the street, I think of my mom. I think of my grandmother. And mostly, I think of possibilities that come from making the most of who we are, including the sweater we refuse to stop wearing.