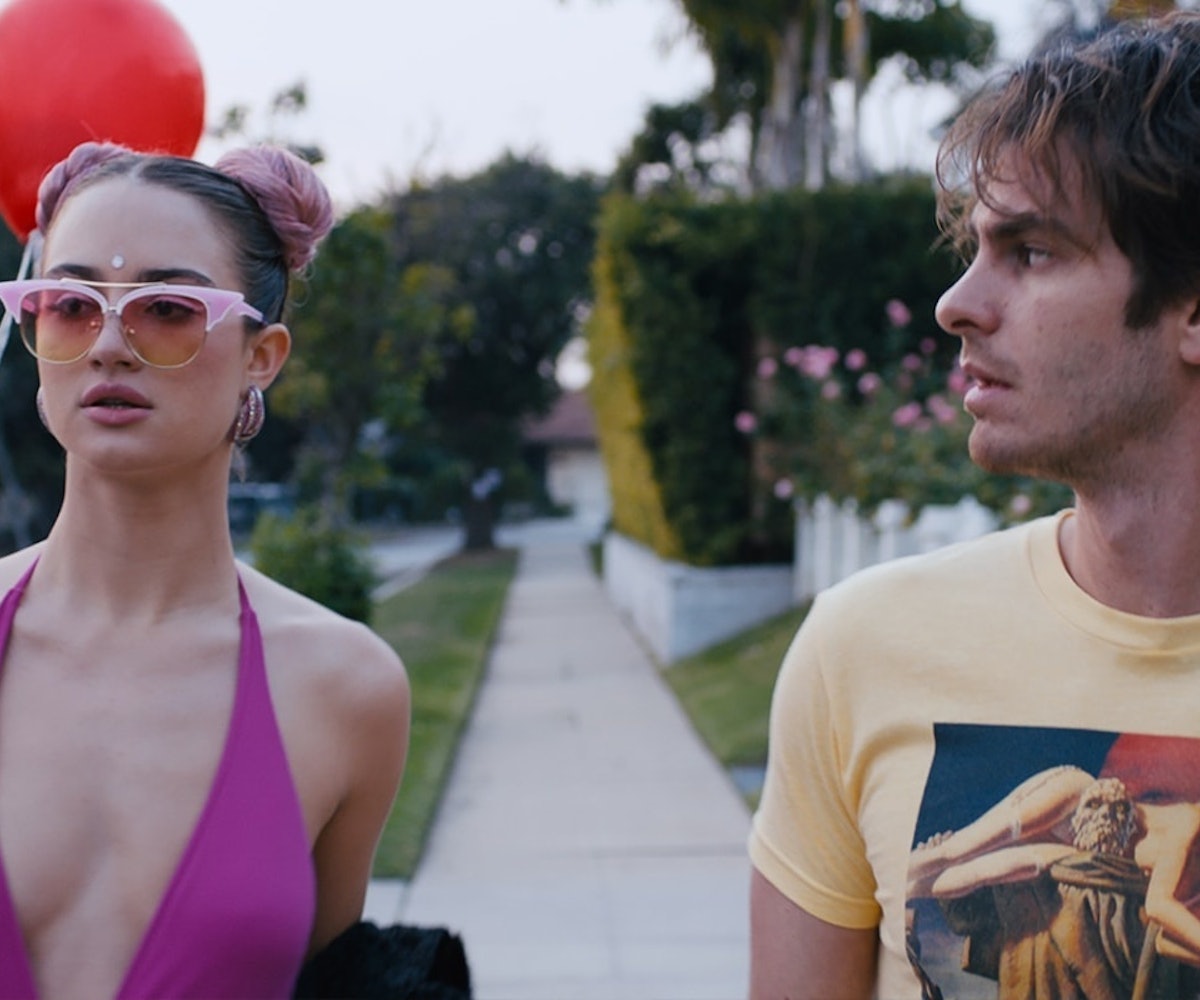 Photo courtesy of A24 via Mongrel Media

The first two feature films from David Robert Mitchell, the director of the new neo-noir Under the Silver Lake, take place slightly out of time. Both The Myth of the American Sleepover and the horror picture It Follows have a vivid sense of suburban late-summer unease, but it's intentionally difficult to root them in a particular year. It Follows in particular mixes and matches its cultural reference points: Old movies play on CRT television sets, while one character has her eyes glued to a vaguely futuristic-looking clamshell e-reader. Mitchell's new film, which has a few select theatrical engagements this weekend before making its VOD debut next week, is not quite so displaced. Though no one mentions the year, its version of Los Angeles feels more or less contemporary; plenty of characters have smartphones, the cars mostly look modern, and the TV sets are flatscreen.

But Mitchell hasn't let go of the past, and neither have his characters. Sam (Andrew Garfield), whose name may not actually be spoken aloud in the film, lives in an unkempt apartment that nonetheless has several vintage-looking movie posters framed and mounted on the wall. At one point, he leafs through back issues of Nintendo Power magazine. When he's at a party and moved to dance, it's because a song from Monster has just come on the stereo. The very casting of Garfield has a time-trippy quality; he's solidly into his mid-30s, but he may be best-known for playing a teenage Spider-Man, a role he took a solid decade after his own teenage years.

Under the Silver Lake calls out Garfield's history with the role; at one point, Sam's hand becomes affixed, Spidey-style, to a stray Spider-Man comic book, one more bit of pop-culture detritus. It's that kind of loopy, referential movie; later, Sam stumbles into a graveyard screening of none other than Myth of the American Sleepover (though not identified as such, and unlikely to register to anyone but a follower of Mitchell's work), and two actresses from the film kinda-sorta play somewhat debased versions of themselves. This time it's the characters, not the setting, that seems to warp our memories of particular time periods.

The movie is a mystery, both in its details and its genre. Sam, a layabout who clearly came to Los Angeles for some greater purpose, since semi-abandoned (probably acting, based on his loosely affiliated friends and movie posters, but again, not specified), skulks around his apartment complex, has sex with an unnamed fuckbuddy (Riki Lindhome), fields TCM-programming recommendation calls from his mom, and spies on his neighbor Sarah (Riley Keough). Early in the film, he comes across some young-ish teenagers who have egged his car, among others, and serves them a shockingly vicious beating. In other words, he's the kind of guy whose movie-star good looks belie something uglier and seedier underneath. The movie is tantalizingly vague about whether this rot was always sitting inside Sam, or whether it's a product of a useless bunch of years in Los Angeles. But it doesn't particularly let him off the hook (though its lack of explicit condemnation has already drawn criticism in some quarters).

The case that makes Sam an amateur detective is, appropriately, a mix of puppy-dog infatuation and creepy stalking. After spending an evening with Sarah, talking and getting stoned and watching movies at her place, he's surprised to find her apartment completely empty the next day. Well, not completely empty: He breaks in and finds a box full of mementos in a closet, only to hide and watch as someone else enters and retrieves it. Sam is on the case, and the movie follows him through 140 minutes of rambling investigation. Most of it involves trailing strangers, but he also makes contact with an eccentric local zine author and tries his hand at decoding any number of secret messages that he's convinced are issued all around normal people, who don't notice the elites communicating with each other in coded plain sight.

The codebreaking obsession has tinges of Zodiac, and for all of the movie's older-school movie references, it's an if-you-liked-this-try-this title for some of the most distinctive American films of the past decade: Not just Fincher's serial-killer drama, but also Paul Thomas Anderson's similarly whacked-out Inherent Vice, Rian Johnson's amateur detective yarn Brick, and Damien Chazelle's more delicate La La Land. The plot borders on nonsensical, but it's oddly easy to follow along; odd and off-putting as he is sometimes, Sam simply isn't smart enough (and Mitchell isn't obtuse enough) to go far enough down the rabbit hole to lose comprehension.

That's not to say Under the Silver Lake isn't a weirdo trip. That must be the reason for A24's decision to perform such a lengthy burial on a title that debuted at Cannes last year. A theatrical release was supposed to follow in June, until it was bumped into December (the thought at the time was that maybe Mitchell was re-editing it after mixed festival reviews). Then it was moved to April, and now its release has been curtailed, as if distributor A24 suddenly has no idea how to market, say, a potentially audience-alienating arthouse genre piece.

The upside is that Under the Silver Lake will be accessible to any interested parties almost immediately; it's just a shame that more of them (including me!) won't see one of the year's best movies so far on a big screen. Cinematographer Mike Gioulakis also shot this year's Split and Us, and he gives Mitchell's images an eerie, clear-eyed glow, even when their meaning is murky. Like a lot of good detective stories, Under the Silver Lake isn't entirely about the mechanics of its mystery (there is a solution, and it's a weird one) so much as its detective's world. Sam's world is littered with cereal boxes, 8-bit video games, and conspiracy theories scribbled on napkins, a sort of cultural graveyard of old obsessions and dented expectations. Mitchell makes visiting it a lot of fun—scene to scene, Under the Silver Lake is enjoyably loopy—but it shares with his past features a palpable sense of melancholy. The young people of It Follows were being talked by encroaching adulthood (and therefore death); Sam is an ex-young trying to stalk a sense of youthful promise. Despite the devices that surround him, digital stalking just won't do; it's analog or bust. Maybe no matter your age/sex/location, there's always a way to feel outside of your own time.

Under the Silver Lake is out in select theaters today.