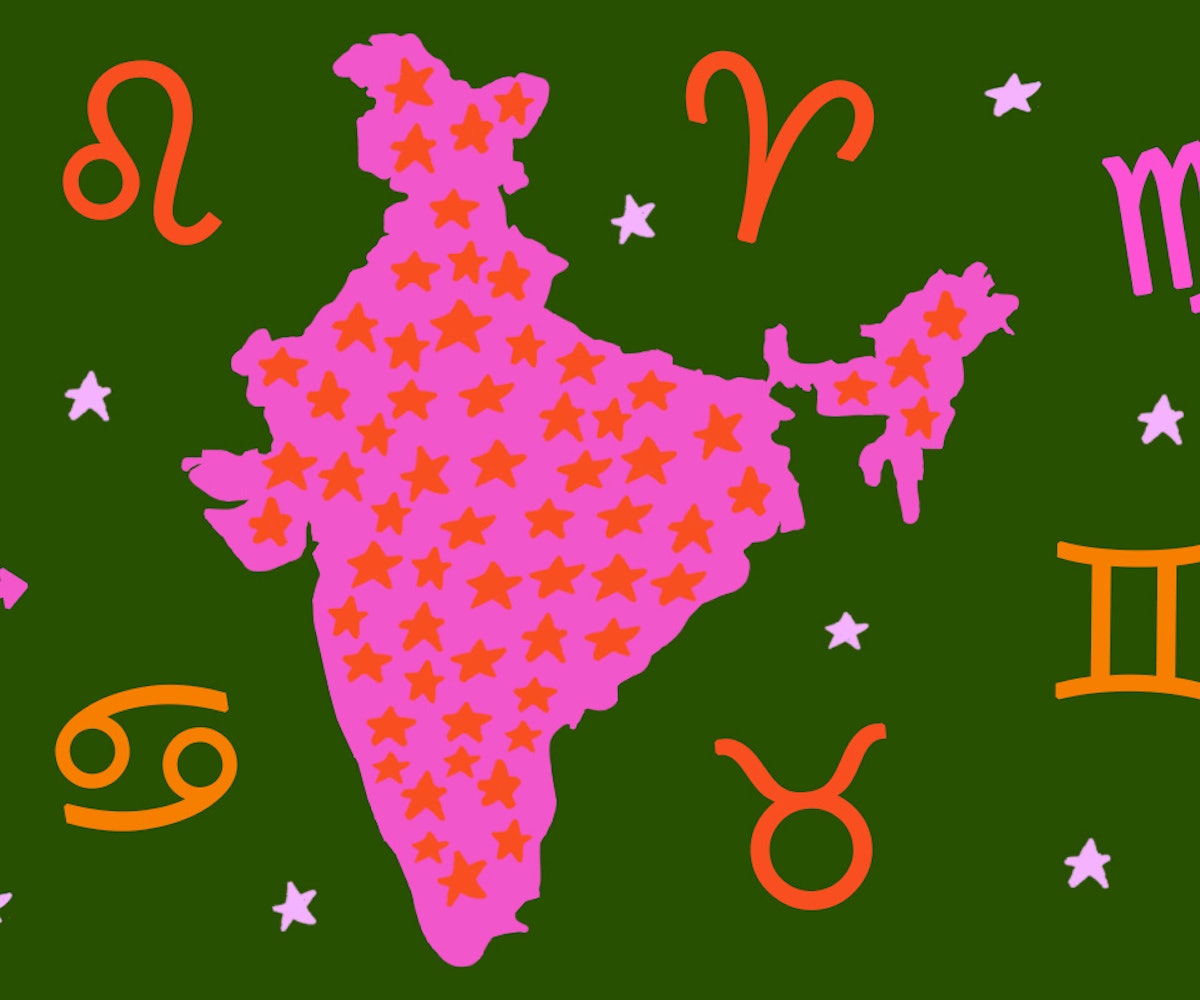 In 1978, a young engineer and an aspiring English teacher wed in Chennai, in southern India. They'd met only once before, for an hour, but everyone was convinced this was it—this was the match. Jōtiṭars—family astrologers—on both sides confirmed: The houses of their births were aligned; therefore, the union was extremely auspicious.

Twenty-six years, a move to Canada, and two children later, they'd divorce—as bitter a separation as any you can imagine, replete with hidden bank accounts and withholding alimony. When the not-so-young-anymore English teacher broke the news to her family in India, the phone filled with silence that was more than shocked: It was also offended. Even in the early 2000s, divorce remained relatively uncommon in India. And, more importantly, "the jōtiṭars had guaranteed it," as the English teacher's father said. Unfortunately, he said nothing more. The English teacher—my mother—hung up. After that, she would not return to India. "Why should I go back just to be shamed for not living up to the jōtiṭars' predictions?" she asked. I didn't blame her; I understood.

I was in high school when all of this unfolded, affording my first glimpse into the power these astrologers had wielded over my family, both then and now. I at once hated and was fascinated by these mysterious fortune-tellers. Every day after school, I started spending hours online, trying to decipher why so many Indians trusted them for decisions on something as crucial as marriage.

Quickly, I learned their power was even greater than I'd imagined: Astrologers in India are not only consulted on marriage, but also on business and financial decisions—everything from when to buy and sell stocks to branding and marketing campaigns. They're also regularly asked to advise on home building and medical issues. Astrology is a multi-million dollar industry in India, with predictions even driving disaster preparations: In 2000, for example, Indian astrologers predicted catastrophic tidal waves, causing an entire sea-side village to abandon their houses. (No catastrophe occurred, except the houses were looted while empty.)

Where did this unquestioning loyalty come from? "From some Hindu God or another," my mother shrugged. After the divorce, she'd taken down the small idols of Vishnu and Ganesha from the altar in the kitchen where she used to pray.

Practiced by 80 percent of India's population, Hinduism, I learned, confers a sacred status to Jyotisha, also known as Vedic astrology. It differs from the Western system not only in its charts, the planetary placements, and the calculations, but also in the credentials its students can earn: In India, you can get a graduate degree in Vedic astrology. And despite continuing complaints by Indian scientists that this undermines India's scientific credibility, it's not uncommon to find former military, accountants, engineers and the like entering these programs.

All of this shed some light on my grandfather's reaction, even if neither my mother nor I could forgive it. I'd always thought of my thatha, the dean of an engineering college, as a man of science. I hadn't realized how important Jyotisha and the temple also were to him: sites of both refuge and revelation. And neither had I understood that the turns of my mother's life—including, most recently, her sharp veering away from Hinduism—challenged the foundation of his.

Soon, my fixation on Vedic astrology faded. As I grew older, I developed the same vague interest in Western astrology common to millennials—the stressed-out, constantly online generation desperate for a spirituality that didn't ascribe to any traditional religion. Like most women I knew in my twenties, I started following astrologers on social media as much for the memes and Mercury retrograde alerts as for the horoscopes hinting that next week could be better, fuller, holding less of that sinking feeling that nothing matters. Or maybe I was looking for signs that I could be(come) better. I can tell you this: In an age of endemic loneliness, the reassurance of my thought patterns and neuroses as a "typical Virgo" eased both my aloneness and my anxiety.

Towards the end of my twenties, I returned to India for the first time in nearly a decade. By then, my thatha had passed away; before that, he and my mother had reconciled—somewhat. They'd spoken on the phone occasionally, usually nothing more than pleasantries, but it was something. As he neared his end, she began telling me stories of her youth with him: him teaching her Sanskrit, the two of them debating themes in The Count of Monte Cristo—her favorite book, and his. And then there were the stories of him "screening" dozens of potential suitors with the jōtiṭar, determined to locate the best match for her, his beloved youngest daughter.

The arc of this difficult love replayed in my mind as I sipped chai in my aunt's living room. Outside, the sinking Chennai sun was burnishing the sky gold.

"It's all exactly how he predicted," my aunt sighed.

"The jōtiṭar—I remember exactly—said your mother would eventually live far away, and only her daughter would return here. He said all that when we were still children."

"Was this the same jōtiṭar who predicted the perfect match between my parents?"

"The very same," she nodded miserably.

Stunned, I said nothing. We sat there for a while, the room silent except for the whirring of the ceiling fan. My mother had never mentioned this other prediction. Did she know about it? And how would she feel about it coming true, especially when the other one—the happier one—had collapsed ?

Despite the jet lag, I couldn't sleep that night, my mind tracing over and over again the constellation of factors that had brought me here, and kept my mother away. Really, I was there mostly as a tourist: Like any other visitor, I wanted to experience the temples and beaches and food. Ideally, I would've experienced them with my mother, but we both knew she could never be only a tourist here, no matter how long she'd been away. How had the jōtiṭar known that things would unfold this way? And if he'd been right about this, why had he been so wrong about my parents' compatibility?

Or had he? In so many ways, my parents had been a good match: They'd held the same political views, came from the same caste and socioeconomic class, parented and disciplined with the same strictness. They both enjoyed travel, classic Carnatic music, the same Bollywood movies and Indian comedians. They even looked good together, her heart-shaped face coming just below his square jaw. No dating service could have configured a more perfect pair. In the end, compatibility hadn't translated into love or even like, and this, over time, soured into resentment: Both yearned for something more, even if imperfect.

Perhaps, I thought, the jōtiṭar's original prediction wasn't as wrong as I'd believed it to be after all. The thought of meeting him while I was here flickered briefly, before sleep put it out.

Two weeks and many temples and beaches and exquisite meals later, I was on a plane back to North America. I hadn't met the jōtiṭar, despite my aunt's repeated offers to take me.

"There's many quack jōtiṭars," my aunt said. "Many, many, many! But not him. The business with your parents' marriage is the only time I've known him to be wrong, and that's just, well..." she trailed off, shaking her head.

I imagined my mother having the same conversation here, a thousand times over with a hundred relatives. I understood again why she hadn't come back. To my aunt, I said thank you, but no. Maybe I didn't want to know exactly what lay ahead, or maybe I feared the jōtiṭar's predictions would be overlaid with a degree of interpretation that I couldn't decode.

I did, however, check my weekly horoscope on my phone before the plane took off. Next to me, an older Indian man, in his sixties or seventies, was doing the same, but on a Vedic astrology site. When he noticed me looking, he smiled and explained, "It calms my nerves before flying."

And maybe this was at the core of why so many us, around the world, turn to astrology: for something to hang onto in the midst of turbulence. As we fly into the unknown—as we are all doing at every instant—the sense of our lives being stewarded by something divine is perhaps not necessary, but it is enormously calming. And as with religion and other matters of the divine, I've realized it's okay to take what serves you—a weekly horoscope, or a reading of your charts in Vedic or Western traditions or both—and leave behind what doesn't.