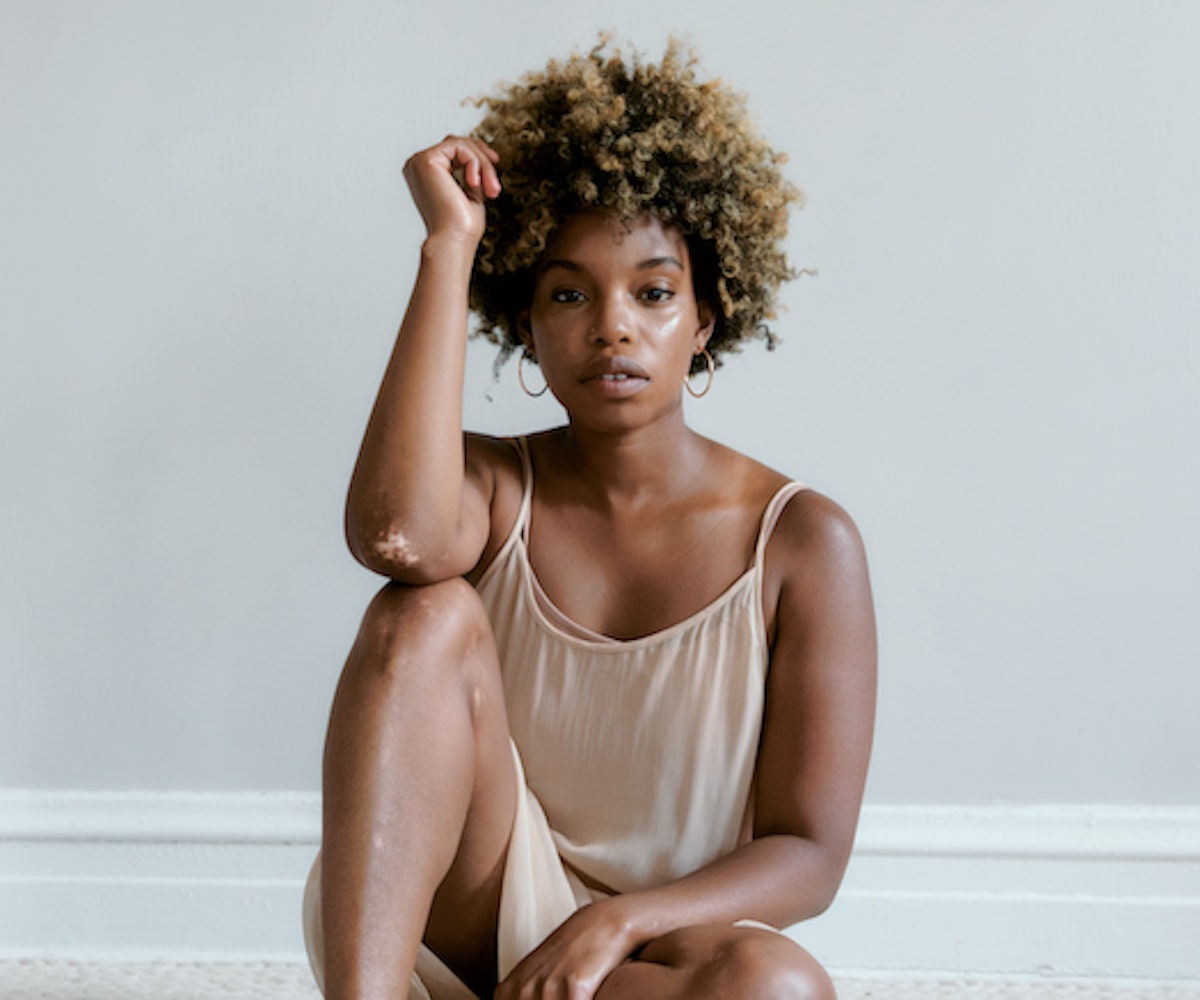 The following is an excerpt from Woman of Color by LaTonya Yvette, published by Abrams Books, 2019.

It is 8:15 a.m., and I hop out of my Lyft and walk through the iced-over snow and mud to enter the set for a photo shoot. There is always a woman greeting me. "Are you LaTonya?!" she asks. I answer yes. I arrive with my fro halfway twisted out and my face bare. At twenty-eight, my skin color is uneven and there is a patch of hormonal acne that I birthed along with Oak in the summer of 2014. "Clean face." When production sends out the call sheet for a shoot, this is what they often request. They check the color of my nails and the style of my hair, but the face part gets me the most.

This is a routine I've executed many times over the past two years, as my blog and overall brand have grown, often creating an illusion of a glamorous life. The makeup artist comments on my cheekbones, and she adds shine to my eyelids and tint to my lips. And for a few hours, I forget about the girl with vitiligo. This is a far cry from the evenings I spent as a kid sobbing over the white patches that plagued my joints and my face. Vitiligo was not only something that altered the way I looked, but altered the way that I defined beauty.

Vitiligo is a medical condition that causes skin to turn white with the loss of melanocyte cells, which produce melanin. It is considered an autoimmune disorder (which can pair itself with another disorder soon after diagnosis or later in life), and it can arrive without reason. Some doctors and researchers believe that it is genetic; some believe it can be brought on by emotional distress. Vitiligo can be focal and localized, or it may affect several different areas on the body. The average age vitiligo appears in someone is twenty-five. Twenty-five.

For me, it appeared in 1996. I was a seven-year-old, fifty-pound black girl turning white without warning or cause. It all started when the corners of my mouth started to ache when I smiled. Initially, there were whispers, then adults would comment abrasively. Kids were dumb. Adults were assholes. Once I was in the checkout line at a Family Dollar store when a woman approached me and asked, "Awww, were you burned?" "No," I answered, half expecting the conversation to end there, but knowing that it never could. "Well, what is that?" That! Why did I need to explain something I hardly understood?

One beautiful summer day, before the white started to move under my eyes, I sat in the backseat of my mother's car, refusing to step a foot out of it. The process was indescribably painful in varying degrees. "It just really hurts in the sun!" I cried, as our car drove into the sun's path. I felt the heat of the sun. I felt the sting of the vitiligo.

The ache around my mouth turned to ash, and the ash crawled its way to the sides of my mouth, forming a beard. It wasn't stark, but it was obvious to me and those near to me. Over the course of a few weeks, the ash started to peel away, exposing a white complexion, like a slab of meat coming off the bone. Soon after, the process began on my joints. Patches started to cover my knees, elbows, ankles, and eventually my knuckles. The faded speckles on my shin and foot proved that maybe the vitiligo wasn't as biased as I once had hoped. Sometimes, when I closed my eyes real tight, I imagined myself as a paper doll, full of color, with someone taking an eraser and diligently going to work on my body. First, they rubbed out my face, then they started on my knees and slowly moved to my ankles. At seven, I was being erased.

I was bullied, but I was a fighter. I'm not sure which came first. Two feet on the ground. Hip out. Fist tight. Cover the face. Wrap the hair around the right. Left hook. One September, when we lived in Long Island with my cousin, my uncle gave me a piece of fighting advice right before school began, anticipating the acclimation we were about to be presented with: "If they're big, hit them in the gut. The bigger they are, the harder they fall," he said, creating a stance and pointing to key spots on his body.

I'm not sure if he was right, but my mind held on to that technique. My older brothers had spent years fighting, too. Maybe it was seeing how they needed to defend themselves that made throwing up my hands in pure animalistic survival mode a bit easier. Once, at recess, I had a full-blown panic attack, knowing the bully in my class just wanted to fight me. "She's not going to let you ignore her. Before she comes to you, you should already have dirt in your hand to throw at her face so you can get the first hit," my friend said, in an attempt to protect my gangly body. The dirt worked. There was the set of twins in the lunchroom one morning at cafeteria breakfast, the girl in the playground, the boy that I was crushing on (and someone I called a friend), who sent a torn piece of paper with the drawing of a cow around class. "This is LaTonya. Hahaha," he wrote. And more.

My vitiligo was alive and visible but had become such a part of me that I subconsciously did things to hide it. If a stranger walked behind me, I'd naturally pose myself with crossed arms, so I wouldn't show the chunks of white on my elbows. When I needed to hold a pen, or have my hands and knuckles be the center of attention, I'd avoid it by simply interlocking my fingers and turning my hands inside out. Or I'd pretend my hands were cold (even in the heat of summer) and tuck the right one between my thighs, and my left hand under my left thigh. You would never see me willingly walk in front of anyone. I was too afraid they'd whisper about the white patches.

I alternated between jeans and capris in the sweltering summer heat, and I either rolled up the sleeves of long-sleeved shirts or gravitated to three-quarter-length sleeves. I disliked every kid from ages four to eleven who was in the strange stage of life between not knowing better and knowing better, but would still loudly comment about my skin to their parents anyway.

In 2006, my family moved back to New York to settle here for good. There is something about New York that allows you to be simultaneously invisible and visible. As a teenager returning to a big city when vitiligo was such a large part of my physical features, there was a part of me that needed that invisibility. But, equally, there was a part of me that craved to be visible in a healthier form. To be seen simply as a New York teenager, not a New York teenager with vitiligo.

But I couldn't take on this city the way I needed to with my vitiligo being this thing that created a story for me. I had to do something.

We were with my grandmother in her Classon Avenue apartment when I finally opened up to my mother about my fear of living in Brooklyn with my vitiligo. Soon after, my mother took me downtown to Fulton Street, where a cluster of mom-and-pop stores blended with jewelry store after jewelry store run by men layered in gold necklaces and rings, hustling deals in front and passing out flyers. We dodged the guys with CDs on the street, and I heard Christian music blasting from the man at the fold-out table a block or so away from McDonald's. There was Conway (my grandmother's favorite), Cookie's, and Jimmy Jazz, too. My mom and I made our way into Macy's, passing through the bags, cornering around the cloud of perfume, and eventually stopping at the makeup counter. "This is what Angela uses," my mom said with confidence. Angela was one of my mom's best friends, who had vitiligo and lupus. I remember her as Southern, frail, beautiful, incredibly warm, supportive, and frequently ill. She passed away a few years later. It wasn't just the vitiligo I feared; it was knowing that the vitiligo often led to lupus—sickness—an early mortality.

"You need two different shades. One for your knees and another for your face," the lady at the counter said. "Show her so she can do it herself," my mom requested. "Just blend," the lady chimed in as I applied it from my laugh lines to my cheekbones. I also needed a setting powder, so we bought it. And I needed brushes, so we bought those, too. I knew how to apply makeup already. Most mornings I'd perch myself on the toilet and watch as my mother readied herself for work. And so, my own routine of eye shadow, eyeliner, and Dermablend was something I did with ease. With the makeup, I assimilated to life as a young woman in Brooklyn quickly and naturally.

Soon after Macy's, I started to straighten my hair; I rode the B52 bus from Bushwick through Bed-Stuy, and heard my grandmother playfully say, like she always had whenever we found ourselves standing in her kitchen together, "Brooklyn girls. Best in the world!"

That afternoon at Macy's was something my mother and I both needed and loved. It was an intersection of my beauty and my pain, and the parts of it that she carried as my mother. The first few years after the vitiligo appeared, my mother had me experiment with diets the doctors said might help. Organic jams, soy milk, and alternative cereals—spelled out on a paper hung on the fridge. They also suggested that she change my environment; stress and trauma from our home had likely brought it on.

The same doctors said that the vitiligo was likely not going to progress, but would stay the same or get better with care and a stress-free environment. They warned against the sun, so I became accustomed to wearing oversize sun hats and lathering with sunblock. In 2008, after a year or so in Brooklyn, I stopped using the layers of Dermablend and went straight to MAC, because my vitiligo had started to clear on its own. My MAC shimmer foundation blended best with the orange undertone of my skin. I used it as a spot treatment, only lightly covering the faded notes of vitiligo that remained on my face. And in the summer of 2010, I stopped covering my elbows and ankles with seasonally inappropriate clothes.

Occasionally, when I'm stressed for long periods of time, I get a glimpse of that seven-year-old girl in the form of a random white patch. She is standing right there looking at me. Having vitiligo as a kid created a version of beauty that is complicated and joyful. There is rarely a week that goes by that I don't remember the six-, seven-, or eight-year-old version of myself that is in pain. To be reminded of that level of trauma, while still being so incredibly thankful that the vitiligo has subsided, is to also be made aware of my own joy. My sensitivity to the physical "otherness" of strangers is something I can't erase. I don't want to.

Woman of Color is available for purchase here.