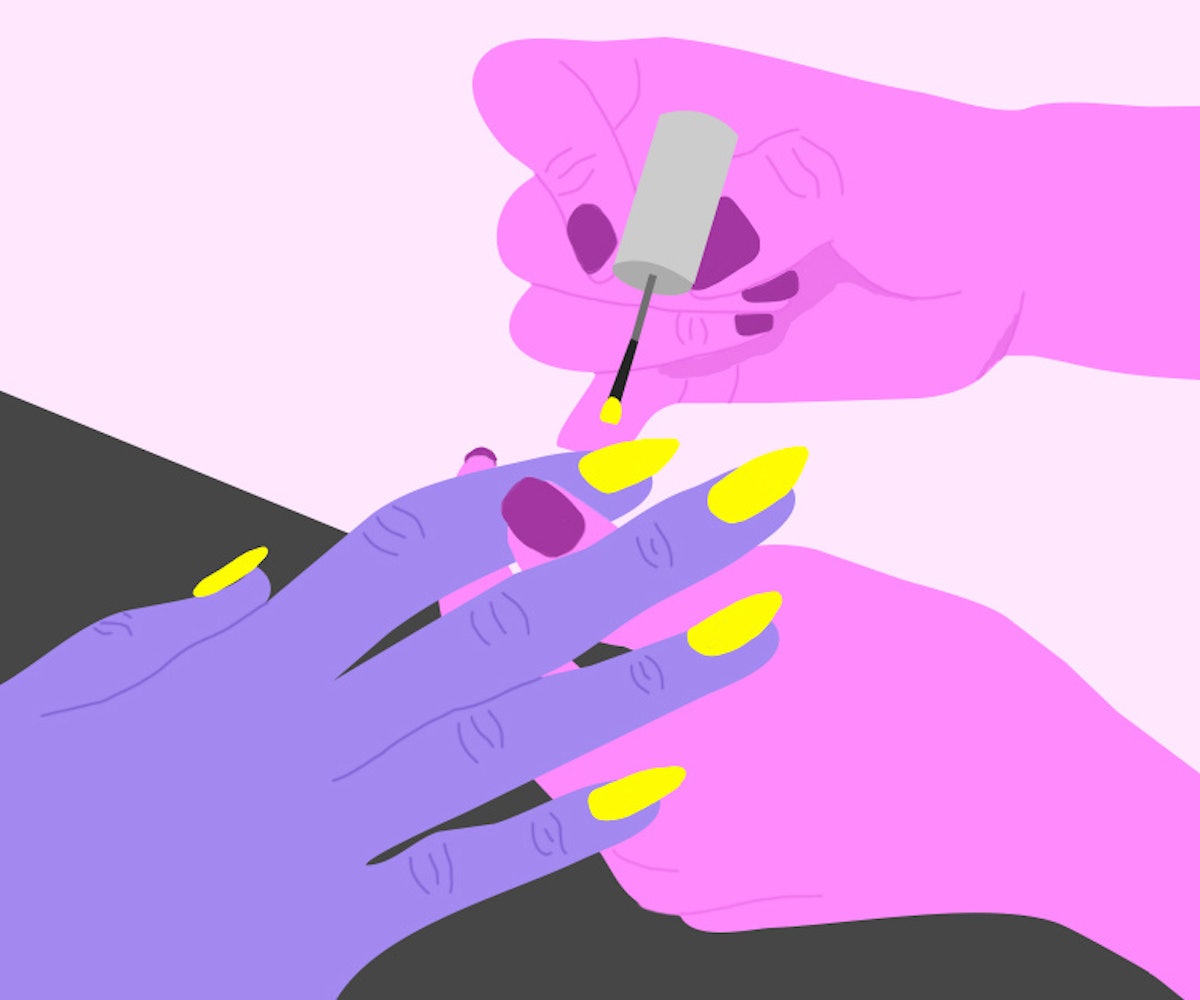 The first time a nail technician sprayed my fingertips from a spray bottle instead of soaking them during a manicure, I wondered if the salon's water had been shut down (I know this happens in New York from personal, unfortunate experience). This was a few years ago, and I was accustomed to always having my hands soaked before a manicure. So while I was assured by the technician that this way was better, I was still convinced that something was off with the plumbing. (I also didn't have heat in my apartment; it was a weird time.)

Since then, though, many newly opened, high-end salons have added the word "water-less" to precede its nail service offerings, and, as I found out recently, the reasons for this are many. "Soaking your hands in water during a manicure service is not advised, because your nails will absorb moisture, causing the nail bed and skin to expand and, as a result, when your nails and skin dry, the polish will peel and the skin will flake," explained Elaine Lee, lead nail technician at Valley. To get more technical, the process for this expansion, according to Paintbox chief educator Evelyn Lim, is called osmosis and, once the nail and skin retract to their original size, that "back-and-forth motion" is what leads to the chipping.

This made scientific sense, but then led to my next question: If soaking results in a short-lived manicure and a dry one in a long-lasting one, why do the majority of salons still soak hands and feet? According to Lim, "People continue to use water in manicures because it is an effective and gentle way to soften cuticles for removal and trimming." Lee concurs, adding that "making the cuticle, nail, and skin moist makes it easier for the technicians to work." Plus, according to her, "the skin absorbs lotions and oils easier when moist."

But not only is soaking bad for the nail polish's longevity, that same water could be a breeding ground for bacteria if the salon doesn't have strict sanitary practices or has old "backwash" water lingering in the foot tub in between clients. (And, even if the salon does enforce proper cleansing of the tubs and tools, just think what your unwashed hands and feet might be depositing into the water anyway). Lee confirms, saying that, with manicures that involve soaking, there's always "the chance of bacteria getting under the skin." Especially if a nail technician cuts cuticles or skin too close, a common occurrence when the water expands the skin.

Even if all these arguments don't convince you to go water-less, here's one that surely will: the environment. Imagine the gallons of water that you can save by opting out of filling tubs and bowls with water that ends up being thrown out. As someone who's never been that great at math, let me tell you: a lot of gallons. (For reference, an estimated 10 to 15 gallons get used per treatment.)

So how does one go about softening the cuticles (which is necessary for a good manicure) without expanding the nail bed? Instead of soaking, both Lee and Lim suggest applying a cuticle softener/remover, that you can purchase at a beauty supply store or even a drugstore (I love this one), to the cuticle area and side walls. "Then gently push back the cuticle and buff away any stubborn cuticle still adhered onto the nail plate," says Lim. Lee, though, warns, "A very little goes a long way."

As someone who is into the concept of minimalist beauty—and a longer-lasting manicure—I have to agree.