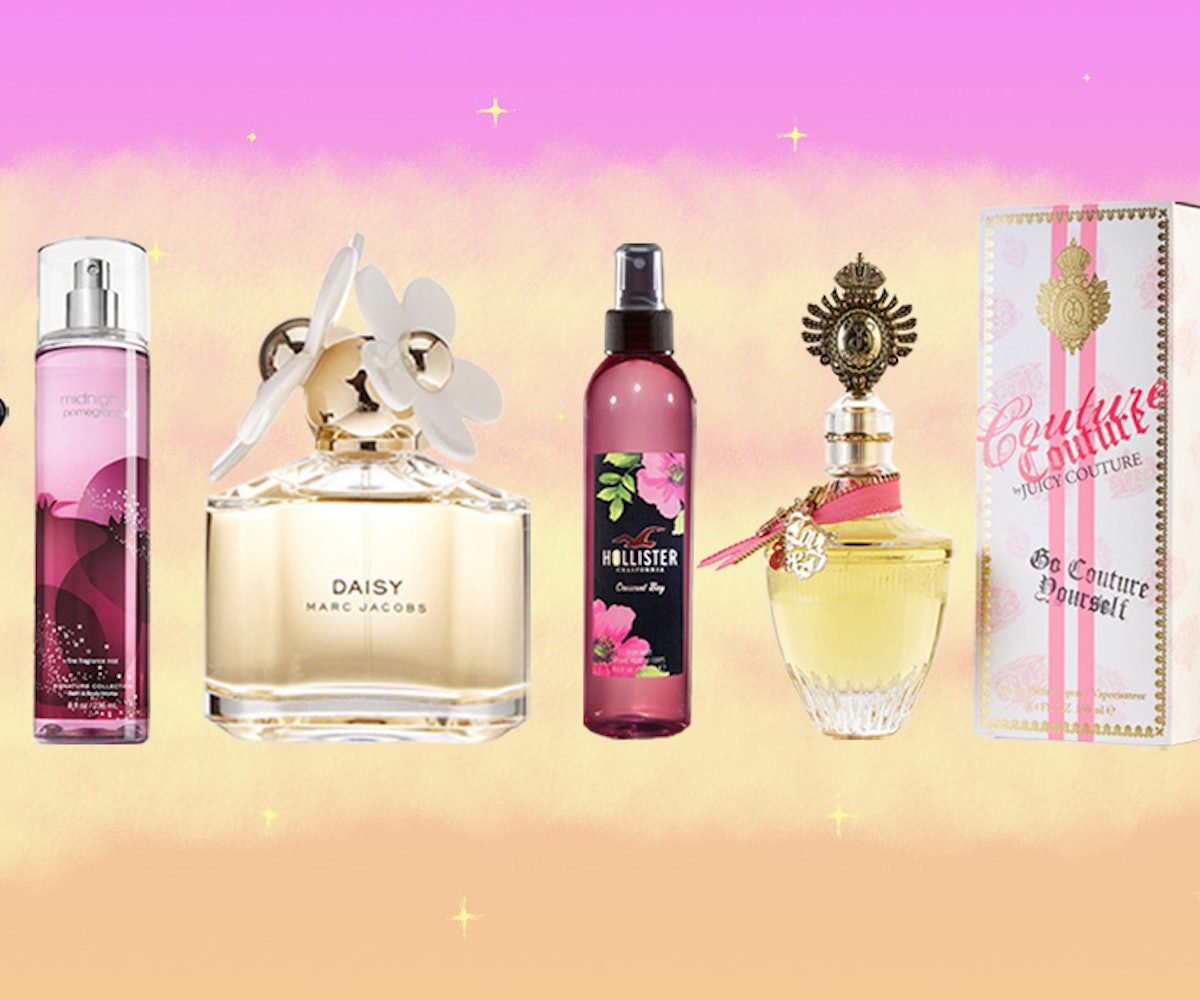 As the early aughts continue to trend—we're literally a Fashion Nova drop away from the resurgence of the visible thong—and we creep closer to the start of a new decade, one can't help but feel nostalgic for the year that brought us Glee, Farmville, and Beyoncé's instantly iconic "Single Ladies." And while many things are fuzzy from that time (it might be all of the fumes from Auntie Anne's and Hollister), the scents we wore have a way of sticking in our memories.

Six NYLON staffers reflect on their 2009 signature scent ahead, and what they're spritzing on a decade later, instead.

As a NYLON- and Teen Vogue-obsessed 16-year-old, I thought the pinnacle of cool was Marc Jacobs. For years I had been saving the Juergen Teller-shot full-page ads and plastering them on my bedroom walls and school binders. While the clothes and bags were a distant dream to my teen self, Marc Jacob's Daisy was the key to becoming like the girls I saw in magazines. In 2008, I was given the Marc Jacobs Daisy perfume and body lotion set for Christmas, which felt like a real graduation from my overused bottle of Hollister August. I will forever associate Daisy's classic floral-y sweet, but slightly woodsy scent with slouchy beanies, crunchy over-straightened hair, and the Urban Outfitters sale section. Since my teen days, I've traded in the more sweet notes of Daisy for muskier woodsy scents. My current signature scent is Laboratory Perfume's Amber, a crisp warm scent with a little bit of spice.

In high school, all the older girls I knew were wearing Viktor&Rolf's Flowerbomb. Overly sweet (I don't think I even liked it that my much when I first smelled it) and very expensive for my then budget, it was the epitome of cool and sophisticated to me. I remember buying it for the first time at the Duty-Free store on my way from Europe to college in the States. By 2009, I was several bottles in, the vanilla-floral fragrance a lingering presence in my room, in my hair, and on my clothes. It would be two more years before I was introduced to Frederic Malle's Portrait of a Lady, worn by a fashion director at a magazine I worked at after college, and, with that, a new world of fragrance was opened up for me. Now my vanity is filled with carefully selected bottles from Byredo, Kilian, and Le Labo. Yet when a few years ago, I was sent a mailer that contained the Flowerbomb, I took it home. While it rests pretty much unused amongst my favorites, occasionally I spritz a bit of it on when at home, as a reminder of a time when my biggest concern was saving up the money for yet another Flowerbomb bottle.

In 2009, I was struggling through high school and wanted desperately to be able to afford DKNY Be Delicious, but my $20 a week allowance didn't allow for such finery. So when I wasn't able to spray myself with Sephora samples, I opted for Bath and Body Works Midnight Pomegranate Body Mist, a fine fragrance mist with spicy, yet fruity notes like sparkling cassis and blackberry spice. I felt a little adult and kind of delicious, a heady, exciting combination for 15-year-old me. Although I've since retired that scent, it forecasted fragrances to come—I'm still drawn to anything spicy and fruity. My current favorites are Diana Vreeland Empress of Fashion, a warm, spicy scent with cassis, pink pepper, and Turkish rose, and Kayali Musk and Vanilla layered together, my favorite custom blend.

My mother bought me a bottle of Juicy Couture's Couture Couture fragrance when it first launched back in 2009. Let it be known, at the time, in the midst of my freshman year of fashion school in New York, I definitely wasn't a Juicy Couture girl. But something about this fragrance was different—it wasn't overly sweet and fruity like you would imagine (and, like most other scents to come from the brand). Something about this scent was slightly more mature—sexy, even. The orange and grapefruit top notes were offset by the amber, vanilla, and sandalwood base, and it became my go-to fragrance for any potential hot date up until about 2015. (And, best believe, I was always told I smelled amazing.)

In 2009, I was in eighth grade and very, very girly. I had pretty much every fragrance from Victoria's Secret Pink (and yes, I had mini versions in my locker), but the one I remember being most obsessed with was Warm & Cozy. I wanted to smell very much like a girl, and *this* was the scent that did it for me. With notes of vanilla and peony, I felt like every boy should have fallen in love with me on the spot.

Now? I wouldn't touch this scent with a 10-foot pole. Besides the fact that I know how backwards Victoria's Secret is as a company, anything that smells too floral or fruity makes me want to gag, and I much prefer genderless scents as opposed to overly feminine or masculine ones—something that came as a result of growing up and coming out. My go-to is now the more sophisticated and much less cutesy Gamine Eau De Parfum, which I see as the perfect universal fragrance. I totally respect my younger self's want to be a feminine goddess, but I've changed a lot since then.

The Laguna Beach body spray from Hollister will forever hold a place in my heart. The few drops left in my bottle—the same one from when I was 14 in 2009, because my sentimentality borders on hoarding—still sit on my vanity in my apartment.

Hollister was everything to the popular kids in my middle school, and given that I didn't quite have the budget of the popular kids, my Hollister collection was limited to a handful of clearance rack tees, one camisole, and the Laguna Beach body spray. I spent all of 2009, and probably '08 and '10, smelling like a strawberry daiquiri. The back of the bottle tells users to "mist all over for a refreshingly fragrant experience," which I definitely did (and shouldn't have done), but hey, at least it wasn't Axe Body Spray.